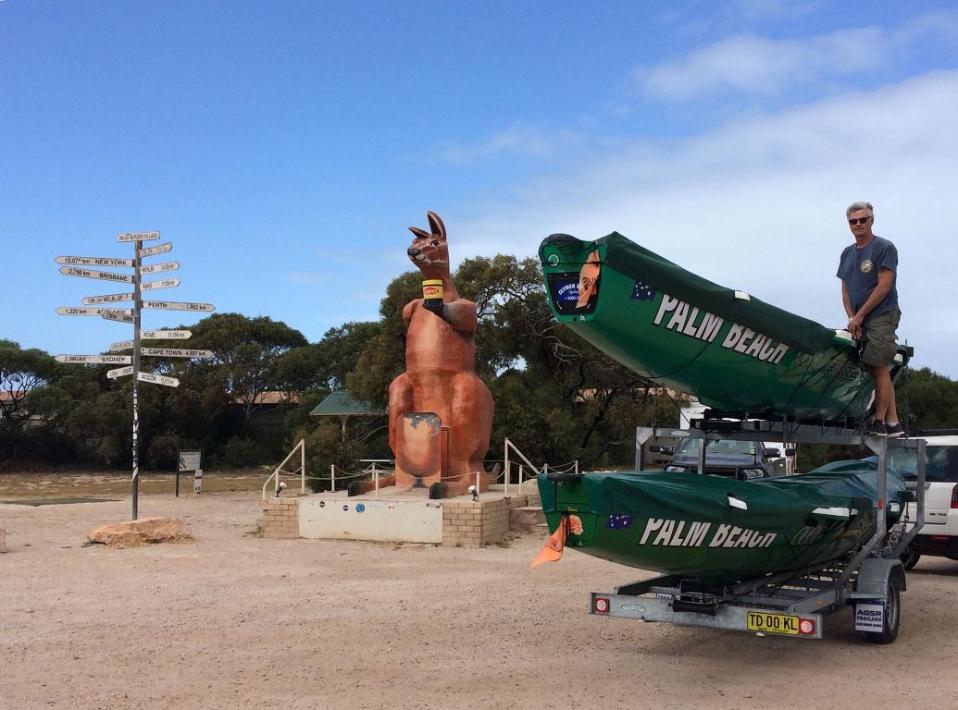 Not too many waves here  - The Big Kangaroo stands 16.4 ft (5 m) tall at Border Village, on the border between South Australia and West Australia. Named “Rooey II“, the papier-mache and fiberglass statue was built in 1986 to capitalise on traffic going west to Perth where the America’s Cup yacht race was being held.  Photo by and courtesy Linda Wiadrowski‎
The long and winding road across Nullabor commenced this week for local surf boat crews taking equipment to the 2018 Aussies, with crews from Palm Beach, Avalon Beach, Newport, Mona Vale and Warriewood wending their way west via a scenic route quite different in some ways to what they're used to but with water in sight across that rather large plain on an equally long road.

and; "Warriewood (is) checking out the exact furthest point from help on the Nullarbor. 1000km round trip back across the Nullarbor to Ceduna or 2000km to Kalgoorlie and back. Still hoping to get the boat there for Masters on Monday."

Russell has got some help now and hopefully repairs can be made so they do get there. It would be a pity to see them not being able to carry the momentum which has seen them collect lots of Masters medals in recent surf sports events.

As with all things surf boats, and in the Surf Life Saving movement itself, help is always on hand through fellow travelling life savers and all those life savers all along the route there and waiting to welcome them at the other end. If the p[hotos coming through are anything to go by, our local Life Savers are enjoying seeing parts of Australia on their travels to Western Australia.

Nathan Perry (Manly) and  Peter Spence (Palm Beach) have been playing tag for 3000 miles but most of our boaties are safely in W.A. - ready for a good sleep prior to their events.

Not many waves here either  -  photo by and courtesy Linda Wiadrowski‎

Joel Piper (Newport SLSC) has already won two GOLD medals in the Australian Youth 2018 Aussies on Day 1 - 1 for U14 Male Ironman, 1 for U14 Male Board Race.

Interviewed after the Board race he thanked James Brooks, Trent Herring and all his other coaches at Newport as well as his Carlile swim coaches, stating that program has really made a difference to his 2018 Aussies results - so far.

The Australian Surf Life Saving Championships is an annual event where over 6000 competitors from Australia’s 311 Surf Clubs come together to compete in more than 450 beach and ocean events. It is the largest event of its kind, only comparing the likes of the Commonwealth Games.

In 2018, everyone is heading back to the beautiful coastline of Scarborough, Perth in Western Australia. The spectacular twilight beach track will be back, champion title holders will be defending their titles and our members and families will again be coming together to celebrate the community that is Surf Life Saving Australia.

“During the past few years we’ve trialled a number of new approaches to make sure our athletes have a safe and enjoyable experience at The Aussies. Each year we implement learnings from events to ensure the safety of our members remains first and foremost. Today’s safety and operations procedures   are another step forward in delivering world class event water safety,” Mr Ford said.

“Subject matter experts, athletes, community groups, local and state Government and Surf Life Saving members have all helped to inform this approach. The Aussies have a special place in our movement and we continue to work closely with our internal and external stakeholders to achieve continuous improvement across the event operations.”

Results are available at: results.sls.com.au