RSV Nuyina Update: May 2018 - Anchors, Ice Knives And Thrusters - Some Construction Pictures for you! 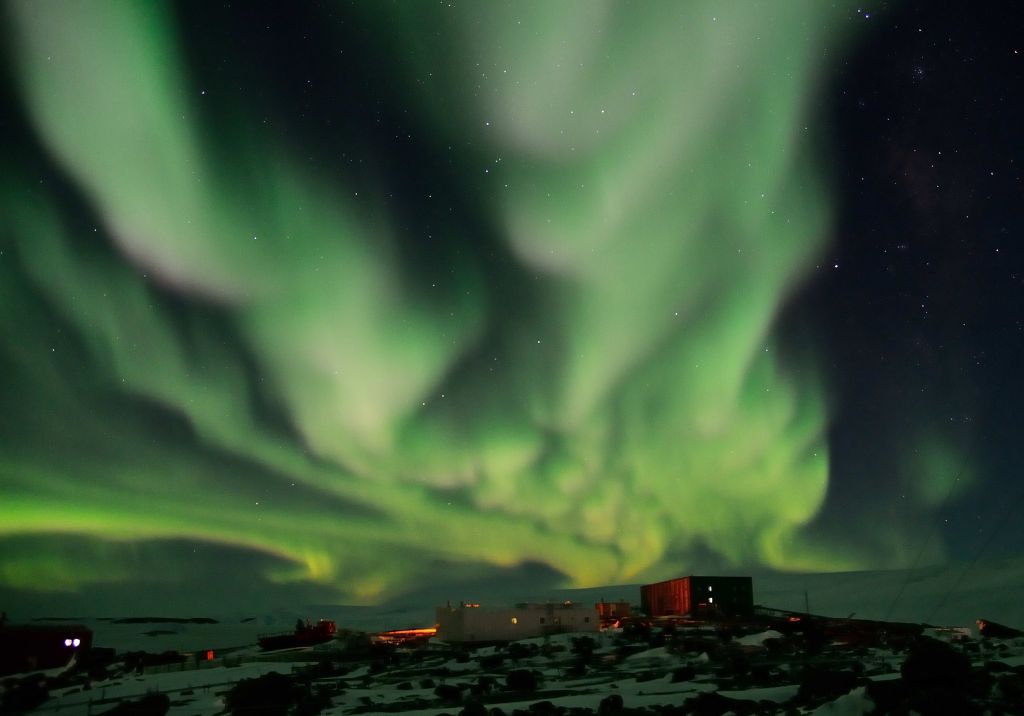 The name RSV Nuyina is a Tasmanian indigenous word meaning 'Southern Lights' that continues the theme of naming Antarctic ships after the aurora australis, and adds another chapter in the story of connection between Australia and Antarctica (Photo: Peter Layt)

The hull of Australia’s new Antarctic icebreaker RSV Nuyina is rapidly taking shape. Some of the key components of the ship are currently being welded and fitted as the hull (the base of the ship) nears completion. Once the hull is complete, the dry dock will be filled with water to allow the ship to be floated out to a larger wet dock, where construction of the superstructure (upper part of the ship) will begin.

This 300 tonne section is part of the top of the hull. At the bottom of the section are two tubes, called ‘hawse pipes’, through which the 275 metre-long anchor chains run when deployed. When not deployed, the chains are stored in ‘chain lockers’ behind the bell-shaped ‘end connectors’ that are visible between the hawse pipes. These end connectors connect the ‘bitter end’ of the anchor chain (the last link in the chain) to the ship. The bitter end link is attached to a quick release in the event of an emergency, allowing the chain and anchor to be cast from the ship. The deck above (deck 5) is the mooring deck for winches and ropes to tie the ship up in port. The deck above that contains an air chemistry lab, cargo space for dangerous goods, as well as a paint store and carpentry store. (Photo: Michiel Jordaan)

The bow of the ship with ‘anchor pockets’ (recesses to house the anchors) visible on each side of the ship. The anchors will sit flush against the pockets to help streamline the hull form. (Photo: Michiel Jordaan)

One of the ship’s two 8 tonne anchors, with its length of chain (275 m) behind. (Photo: Michiel Jordaan)

This mooring winch or ‘windlass’ (on the right) will be fitted on the mooring deck to winch ropes used to tie up the ship while in port. To the left is a ‘chain stopper’ which secures the anchor and chain when not in use. (Photo: Michiel Jordaan)

This is one of two ‘gondolas’ that will hold the ship’s propeller shafts. Each one is made of 80 tonnes of steel. The length of steel above the propeller shaft tunnel will help deflect sea ice broken up by ice knives at the rear of the ship (see next photo). The cross at the front of the tunnel is for a laser sighting to ensure the gondola is correctly aligned with the ship’s engine. The complex and precise nature of the gondola requires a specialist team of 27 welders to install it. The gondola must be preheated to 150°C before welding can commence, as welding cold steel could cause it to expand and contract unevenly, affecting alignment and possibly causing the steel to fracture. The welders will each spend one hour on the job before another takes over and will have to wear wooden-soled shoes to cope with the heat. Once the welding is complete the gondola will need to be cooled slowly, to prevent warping. (Photo: Michiel Jordaan)

At the stern of the vessel are two ice knives that are integrated into the rudders and ‘gondolas’ (see previous photo) to help protect the propellers and propeller shafts from ice when the ship is moving backwards. A gondola is being installed beneath the left ice knife, using a flat-bed truck and a frame, to lift and hold it in place. (Photo: Michiel Jordaan)

The two rudders that will be installed beneath each ice knife. Hatches in the rudders allow ingress for maintenance. Each rudder weighs 33.5 tonnes. The shaft around which the rudder turns, called the ‘rudder stock’ weighs 31.2 tonnes and the nut that secures the rudder to the rudder stock weighs 1.5 tonnes and has a diameter of 1 metre. (Photo: Michiel Jordaan)

This steel shape forms part of the ship’s ice knife at the bow. The ice knife will help to split and distribute ice under the vessel after it has been broken up by the weight of the bow. (Photo: Michiel Jordaan)

This J-shaped piece of 100 mm thick steel will be welded on to the central spine of the ship’s ice knife on the bow (see previous picture). (Photo: Michiel Jordaan)

The bow of the ship where it first contacts the ice. Once complete, the struts (below) and lifting lugs (at top) will be removed and the steel resurfaced in preparation for painting. (Photo: Michiel Jordaan)

These tunnel thrusters allow the ship to spin on a dime and hold a set position (‘dynamic positioning’) within ±20 m accuracy. There are 6 tunnel thrusters – three at the front and three at the rear – each requiring 1300 kW of electrical power for maximum thrust. Among other uses, they will hold the ship in place during deployment of scientific equipment in a range of sea states, as well as during small boat deployment and cargo operations. (Photo: Michiel Jordaan)

Two of the tunnel thrusters being installed. (Photo: Michiel Jordaan)

This photo shows the beginnings of the switchboard room on the aft port side. The switchboard will take power from the electrical generators and redirect it where it needs to go, to run all the electrical components on the ship, including computers, lights and laboratory equipment.  (Photo: Michiel Jordaan)

Origin and meaning of RSV Nuyina

Nuyina is a Tasmanian Aboriginal word meaning ‘Southern Lights’. It is pronounced noy‑yee‑nah (listen to an audio pronunciation).

The Southern Lights, also known as aurora australis, are an atmospheric phenomenon formed over Antarctica that reaches northwards to light up Australian – and particularly Tasmanian – skies. Australia’s current long serving icebreaker the RSV Aurora Australis bears the name of the Southern Lights, while the first Australian Antarctic ship, Sir Douglas Mawson’s SY Aurora was named after the same phenomenon.

The name RSV Nuyina continues this theme and forms another chapter in the story of connection between Australia and Antarctica, which has played out historically over the past century and geologically over a much longer time frame, continually watched over by the dancing green curtains of light.

The ship name was suggested by Australian schoolchildren through the ‘Name our Icebreaker’ competition, which was designed to engage Australian students and expand their understanding of Antarctica, its environment, climate, history and Australia’s role there.

Aboriginal language was the inspiration for a fifth of all the valid ship names submitted by Australian children. In many of the competition entries, students spoke of their desire for reconciliation and recognition of Australian Aborigines. Using an Aboriginal name for the new ship would acknowledge all the children who wanted to recognise the interwoven history of Aboriginal people and the great southern land – Antarctica.

Palawa kani is the language spoken by Tasmanian Aborigines today. It draws on extensive historical and linguistic research of written records and spoken recordings, and Aboriginal cultural knowledge. Not enough remains of any of the original six to 12 original languages to form a full language today, so palawa kani combines authentic elements from many of these languages. It flourishes in Aboriginal community life, with three generations of children having grown up learning it, and features increasingly in public life, including in gazetted Tasmanian place names.

Australia’s new Antarctic icebreaker RSV Nuyina is being constructed in Damen Shipyards, Romania. Construction commenced in late May 2017, with a steel cutting ceremony, while a keel laying ceremony in August saw the first building-block of the ship consolidated in the drydock. Construction is expected to be completed at the end of 2019 or early 2020.

Previously: Australia's New Icebreaker Name Providing Students With The Trip Of A Lifetime

29 September 2017: Media release - The Hon. Josh Frydenberg MP, Minister for the Environment and Energy
Twelve school students are set to become the first children to fly to and set foot on Antarctica as part of the Australian Antarctic Program, following their win in the Turnbull Government's national "Name our Icebreaker" competition.
The winning students from St Virgil's College in Hobart, Tasmania, and Secret Harbour Primary School near Perth in West Australia named the new $1.9 billion ship RSV Nuyina (noy-yee-nah), meaning 'Southern Lights' in palawa kani, the language of Tasmanian Aborigines. 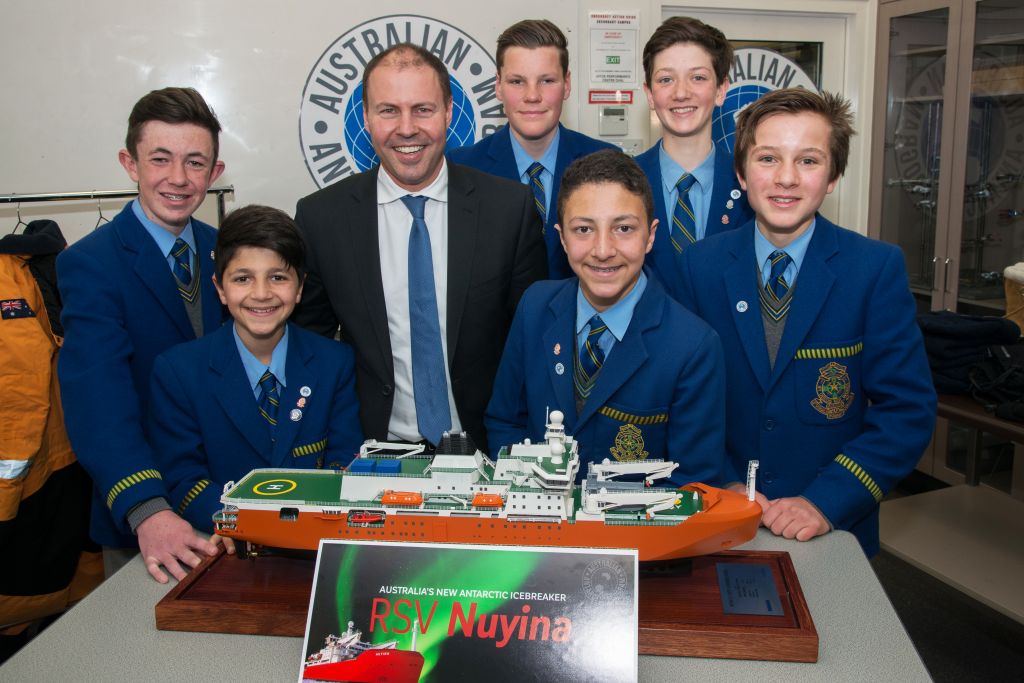 Secondary school winners of the Name Our Icebreaker competition from St Virgil's College, Hobart, with Department of the Environment and Energy Minister, the Hon Josh Frydenberg MP. (Photo: Glenn Jacobson)
They will embark on their exciting, landmark journey to the icy continent in November. In many ways, these lucky young Australians are reflective of the long-term investment this new vessel represents for our Antarctic capabilities. 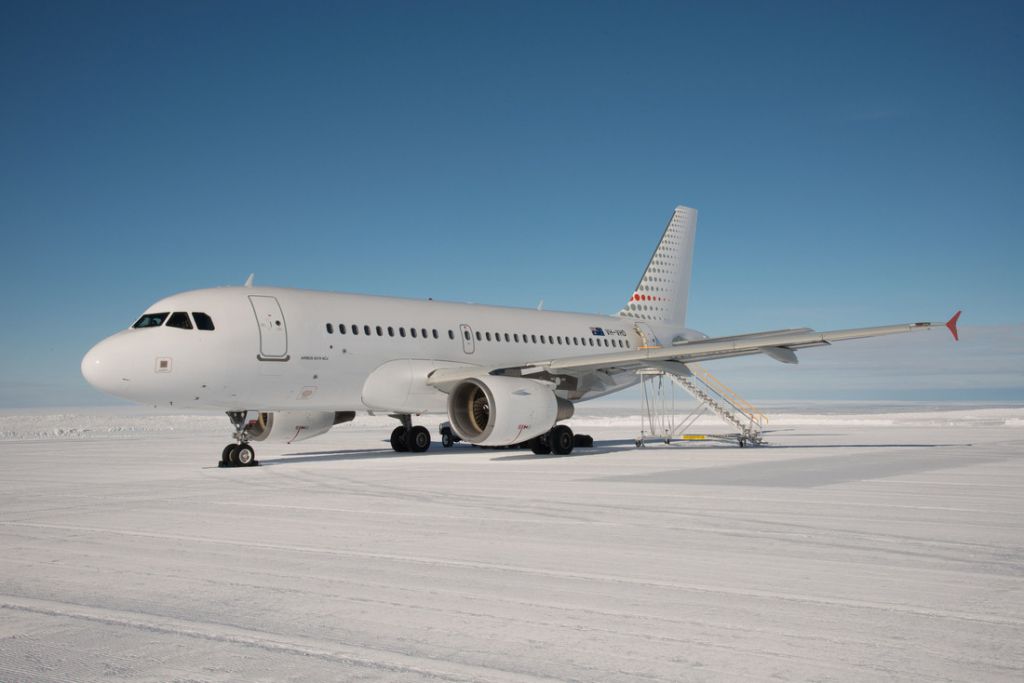 Twelve school students are set to become the first children to fly to Wilkins Aerodrome in Antarctica. (Photo: Australian Antarctic Division)
All schools participating in the naming competition can be proud of their thought-provoking contributions.
The national naming competition attracted nearly 800 entries from primary and secondary students across every state and territory, with about a fifth of these suggesting Indigenous names. Many of the suggested names were inspired by the Southern Lights or aurora australis, the atmospheric phenomenon that produces curtains of colourful weaving lights originating over Antarctica.
Using the name nuyina for the Hobart-based ship recognises the long spiritual connection Tasmanian Aboriginal people have with the frozen continent, as the most southerly humans on the planet during the last ice age.
The name also connects Australia's more recent icy endeavours, with several Australian Antarctic ships named after the evocative lights. Sir Douglas Mawson's ship, used for the first Australian-led expedition to the Antarctic, was the SY Aurora and our currently-serving icebreaker is the RSV Aurora Australis.
Formal approval to use the palawa kani word nuyina on the new ship has been received from the Tasmanian Aboriginal Centre (TAC).
Four runner-up prizes of a $500 technology voucher were awarded to Rokeby Primary School in Tasmania, Ulladulla High School in New South Wales, Essex Heights Primary School in Victoria and Cowell Area School in South Australia.
The keel of RSV Nuyina was laid last month and the icebreaker will arrive in Hobart in 2020.