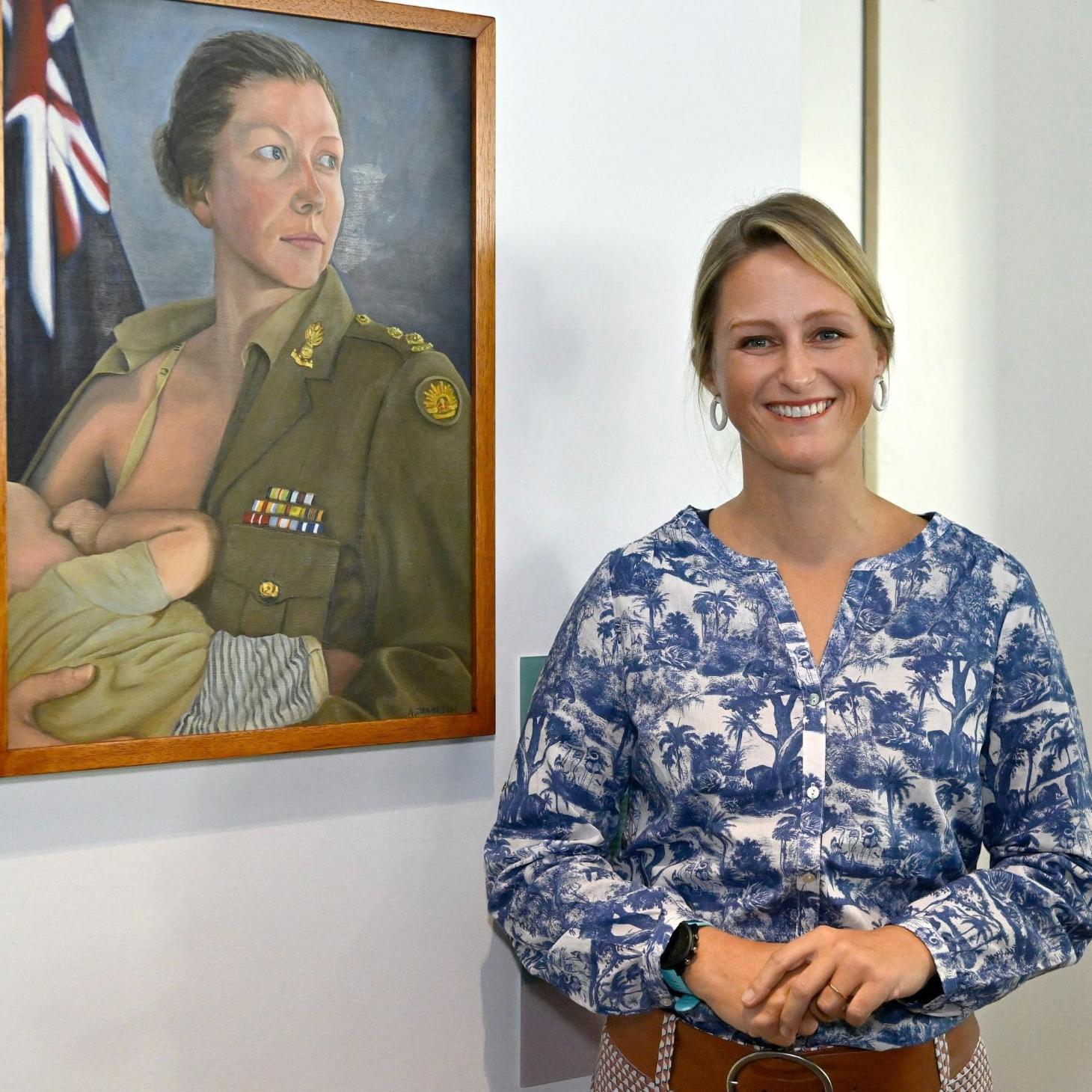 The Australian War Memorial is delighted to announce that retired major, Mrs Anneke Jamieson, has won the 2022 Napier Waller Art Prize with her portrait, The Promotion.

The Promotion is an acrylic and oil on canvas featuring a servicewoman in uniform breastfeeding her baby. Mrs Jamieson, a mother of three, took inspiration from her own experiences when creating the work.

“I dedicate her to the mothers that serve; to their sacrifices and conflicted hearts and to the families who support them,” Mrs Jamieson said in her artist statement.

The work was selected from a shortlist of 14 highly commended entries. Mrs Jamieson will receive a $10,000 cash prize and the portrait will be added into the Memorial’s National Collection.

The Napier Waller Art Prize is open to all current and former service personnel in the Australian Defence Force.

2022 is the fourth iteration of the Prize, which encourages artistic excellence and raises awareness of the experiences and talent of service personnel. This year the AWM received 116 entries across diverse artistic media

“We are honoured to provide this opportunity for those who have served, and those still serving, to share their stories through art. The prize encourages artistic excellence, promotes creativity and highlights the experiences and talent of our service personnel,” Australian War Memorial Director, Matt Anderson, said.

“The judges were impressed by all the highly commended works, and we came to a unanimous decision to award the prize to Anneke Jamieson. Her portrait highlights the challenges of commitment to service and family.”

Head of Art at the Australian War Memorial, Laura Webster, said: “This year’s short-listed works are of an extremely high standard. They are also quite diverse and show a broad range of artistic talent with a variety of mediums represented.

“The winning work is very significant because it tells the story of women and mothers in the Australian Defence Force.”

An exhibition featuring 14 highly commended works is being held at Australian Parliament House until 20 November 2022.

The Napier Waller Art Prize is sponsored by The Hospital Research Foundation Group, the Department of Veterans’ Affairs and Thales Australia, and is supported by the University of Canberra.

The 14 highly commended works are on display at Australian Parliament House until 20 November 2022:

Professor Paddy Nixon, Vice-Chancellor and President of the University, University of Canberra

The Napier Waller Art Prize is named in honour of Mervyn Napier Waller, an Australian artist and serviceman who was wounded during the fighting at Bullecourt in the First World War and had his right arm amputated as a result. During his convalescence, Waller learned to write and draw with his left hand, saying, “An artist draws with his head, not his hands.” Waller displayed remarkable ingenuity throughout his career and went on to create the mosaics and stained glass windows in the Hall of Memory at the Australian War Memorial.