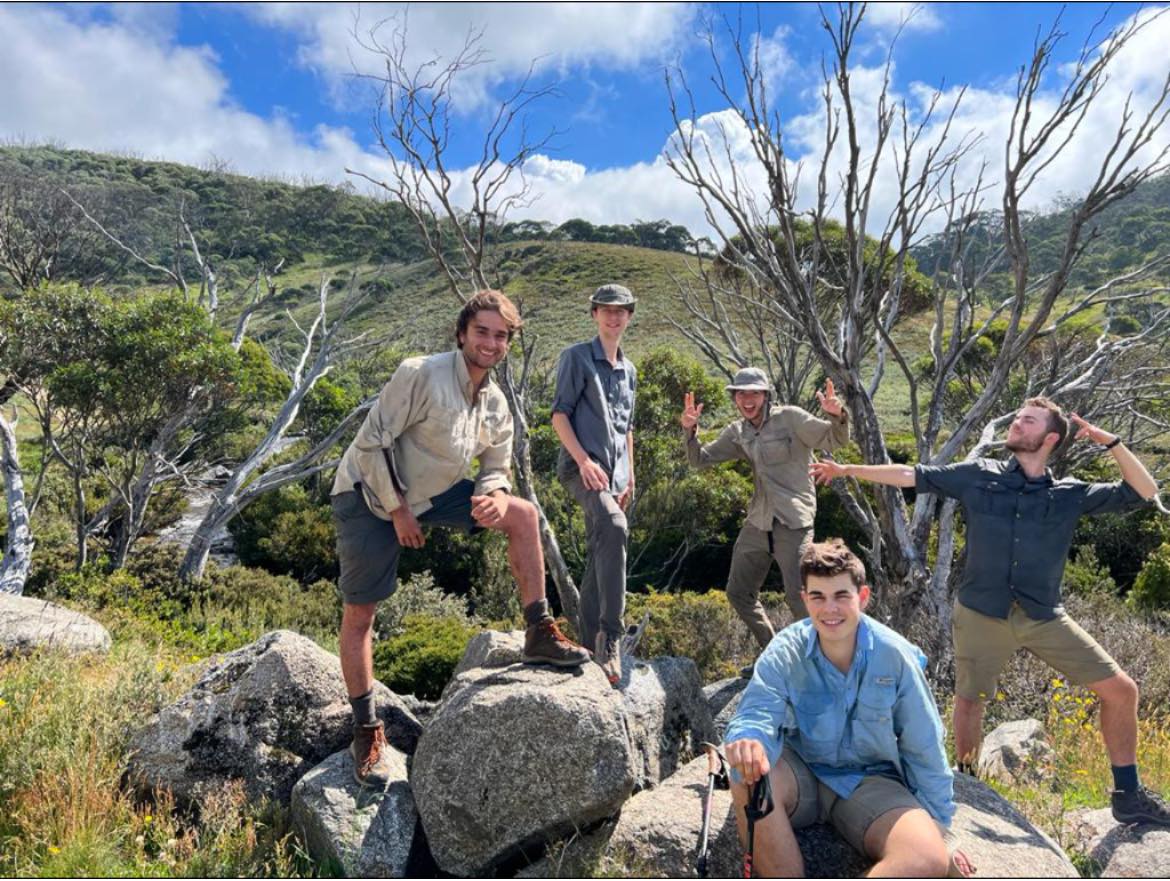 A group of Northern Beaches young men are trekking 680 kilometres through the tough terrain of the Australian Alps to raise money for Sydney Wildlife Rescue to purchase an All-Terrain Vehicle (ATV) which will be used to rescue wildlife in need of assistance, particularly after natural disasters such as fires, floods and cyclones.

In the 2020 Black Summer Bushfires, teams of Search and Rescue volunteers had to carry heavy rescue gear and darting equipment across many kilometers in search of fire-affected wildlife. They also had to carry heavy kangaroos and wallabies (that had been sedated) across the fire grounds to get them to the triage facilities, one of which was Sydney Wildlife’s Mobile Care Unit.

Nearly 3 billion koalas, kangaroos and other animals are estimated to have died or been displaced in Australia's Black Summer bushfires.

“The electric ATV and trailer will help volunteers with future Search and Rescue efforts and transportation of sedated wildlife across difficult terrain, and hopefully save more lives,” said Lynleigh Greig, Sydney Wildlife Rescue volunteer and co-manager of the Mobile Care Unit.

Lynleigh Greig’s son Connor (20) and his schoolfriends Yannick Müller (20), Alex Burton (aka Sanchez, 19), Jonty Earp (20) Harry Peters (20) and Ben Harris (20) aim to raise $20,000 by trekking from Walhalla, VIC to Namadgi Visitor Centre in the ACT. As we go to press the boys are almost three quarters finished on their Alpine Odyssey and almost three quarters of the way to their fundraising goal.

They commenced their six-week trek on January 3 and will finish this week, around February 11.

Lynleigh said, “I don’t remember what I was doing when I was 19 years old, but I am certain it wasn’t something as purposeful and selfless as what these youngsters are doing! They are wrecking their own feet to save ours. I feel very proud to know them!”

Please support the young hikers on their wild, treacherous journey on the Australian Alps Walking Track through Victoria, NSW and the ACT.

The Instagram page is brilliant as it shows what the boys have encountered along the way, including flooded tracks, ethereal groves, places where the trail has disappeared amongst recent growth, along with breath-taking views from their summits - a few examples:

The parents were all assigned a Food Drop location. There would be 5 Food Drops and a final pick-up location.

Yannick’s Mum and Auntie drove the boys down to Walhalla (2 days’ drive) and then camped with them for the night before the hike commenced. They also did the first and third food drop at very remote locations. Jonty’s parents did the second Food Drop in Hotham. Alex and Connor’s parents did the fourth one in Thredbo and Ben’s dad will be doing the 5th one in Kiandra.

The Pick-up in Namadji in the ACT will be done by Ben and Connor’s parents.

Last weekend the Food Drop point was Dead Horse Gap, Thredbo. The Food Drop Fairies for this week:  the Burton and Greig families.

''We hired a cabin in Jindabyne where the boys could take a shower (they haven’t had showers for 2 weeks) and eat some fruit and veggies (powdered milk cereal and packet noodles are what they’ve lived on).

There is also have a washing machine so we are battling through the stinky gear.''

Lynleigh Grieg took the opportunity to interview the boys.

Interview and videos by Lynleigh - commencing with 'Why are we Trekking?' :

Some of the Sydney Wildlife Rescue team sent some questions to the boys too:

Firstly, can you tell us about your memories of the Black Summer Bushfires of 2019/2020 and how they influenced your decision to embark on this 680km trek to fundraise $20k for an All-Terrain vehicle and trailer for wildlife rescuers?

Yannick:  I remember seeing a map of Australia showing all the active fires and it looked as though the whole country was alight!  Watching footage of the walls of flames, my only thought was “How could anything possibly survive that?”

Connor:  Well, my Mom is a wildlife rescuer and she was gone for months – embarking on Search and Rescue missions to rescue surviving wildlife.  She had a very tough time and we wanted to do something to make things easier for her and all the other rescuers in the future.

What was your parent’s reaction when you told them you were planning a six-week trek through the Australian Alps and how have they been involved in your fundraising campaign?

Alex:  I think my parents thought we were going on a 5-day stroll through the mountains.  When I eventually mentioned that it was 6 weeks, they were much more concerned.

Harry:  At the Planning BBQ with all the parents, one of the gang said “Well, don’t Google The Button Man”…. So guess what they all did…?  After that, they were all a lot more concerned…

What did your mates think about your adventure and how are they supporting you?

Yannick:  Everyone was invited to join the expedition but only the very brave (or silly) accepted the challenge.

Connor:   A few have donated and some are following us on Instagram.  We will be expecting them to organise a Ticker-Tape Parade for us through Hyde Park when we return… (without the environmental hazards, of course lol) {chuckles}

How would you have spent your time if you’d stayed in Sydney over summer?

Alex:  Probably going to the beach, playing games online or catching up with mates.  Nothing very inspiring.

Connor:  My Mother would have dragged me out on wildlife-rescue missions.  Climbing ladders, crawling under spidery houses, carrying heavy critters.  Maybe this was the easier option {laughs}.

You’ve known each other for years, but how have you been getting along together since you set off on the 3rd of January?

Jonty:  We have been getting on fine, most of the time.  There have been some tense moments when we were running behind schedule, though…  Watching Yannick and Connor argue is like watching King Kong and Godzilla battling it out!

Connor:  When your past-time is picking on your friends, tensions flare every now and then…

Alex:  I think it’s normal for people to drive each other bananas after 26 days, but everyone seems to move through it pretty quickly and we also joke around every day which helps.

Ben:  There has been some Tom-Foolery as you would expect – putting rocks in each others’ packs on the sly, throwing each others’ belongings across the river, occasionally pretending to reach out to help a mate up the river bank and then snatching your hand away to watch them fall into the water again.

What’s the food been like – have your supplies lasted or did you need to resort to bush tucker?

Yannick:  The food rations have lasted well!  Most weeks we even have some snacks still left over.

Jonty:  Which is rather fortunate as I would end up eating poisonous berries and needing a MediVac out of the mountains…

Have you experienced any wildlife encounters on your trek apart from leeches and ticks?

Jonty:  We’ve had a bit of a Snake Count going and we are up to 19 snakes!  Mostly copperheads and red-bellies.  I have managed to inadvertently step over at least three and they have been very tolerant, thankfully.

Alex:  We’ve seen wallabies, some fat, lazy blue-tongue lizards that refuse to move off the track and a couple of eagles.  There have been a few introduced species such as deer and brumbies as well.

Connor:  We were hoping to see more but perhaps we make too much racket or smell so bad that they all high-tail it out of there before we can see them!

Can you describe the most testing/challenging part of the trek?

Ben:  Having a BIG spider travelling in my pack with me for hours and only making itself known when I pulled out my water bottle!  That, and the knee injury.

Connor:  For me, not being able to shower or sleep in a bed at the end of a hard day of trekking.

Yannick:  The lack of music.  We resorted to singing ABBA tracks to get ourselves up the gruelling ascents!

Alex:  Not having chairs to sit on when you are so exhausted.

What’s your most memorable moment so far?

Ben :  Crossing the border from VIC into NSW

Jonty:  Food Drop days.  (All the others chorus in unison:  Jonty is very food-driven!)

What’s the first thing you want to do when you get home?

Connor:  Hug my family and animals and then sleep for 3 days.

How do you plan to celebrate your achievement?

We all plan to do Go-Karting in Canberra!

Would you do it again? ‘Australian Survivor’ and ‘I’m a Celebrity – Get Me out of Here’ are casting for applicants for their next seasons!

Yannick (from whom the idea sprang):  Absolutely!  Wouldn’t do any of the shows but I am already planning a 900km hike in WA next.

All the others:  Groan…

And finally, what would you say to anyone who’s been following your journey and is thinking of contributing seeing your almost three quarters of the way to your $20k goal?

Group:  We say Thank You for following our expedition – your support has definitely buoyed our spirits!  And if you are thinking of contributing – don’t hold back! {chortling}

The wildlife and the rescuers have done it tougher than us and we have a huge respect for what they went through in the Black Summer Fires.

Let's get the Alpine Odyssey boys over the line by the time they cross their own trek fiisnih line.

Sydney Metropolitan Wildlife Services Inc (Sydney Wildlife) was formed in May 1997, by a large group of experienced wildlife carers, to meet the specific needs of urban wildlife in the Sydney metropolitan area.

We are licensed by NSW Department of Planning, Industry & Environment (via NSW National Parks & Wildlife Service) to rescue, rehabilitate, and release sick, injured and orphaned native animals across the greater Sydney metropolitan area and to educate the community, at all levels, about the need to protect our native animals and to preserve their habitats.

Our organisation is a registered charity and is operated entirely by volunteers ensuring all public donations go directly into saving our precious wildlife. Our rescue and advice line (02) 9413 4300 operates 24 hours a day, 7 days a week, 365 days a year. To discover more, visit www.sydneywildlife.org.au