All is quiet on the Western Front

As we won't be able to commemorate Anzac Day together this year, nor be able to travel overseas for some time, photos from a visit to the Western Front battlefields in 2018 might be of interest to others researching their families.

The photos show what particular battlefields, where many Australians served in horrific conditions, look like today. “All quiet on the Western Front” is the English title of a German novel of 1928 describing the tragedy and futility of WW1.  It was subsequently banned in Nazi Germany.

A family heirloom is an album containing “Post Cards” that my grandfather sent to my grandmother covering most of the period from when he left for overseas on active service and when he returned to Australia.

Written in pencil, they record his progress and survival over three years away from home.

The postcards are from South Africa where the ships refuelled, England where the troops trained at Lark Hill on Salisbury Plain (5 minutes from Stonehenge), to France and Belgium, hospital in France after being wounded, hospital in England and recuperation, billeted with an English family, before being sent back to the Front. After the Armistice he was billeted with a Belgian family, then sent to France, England and home.

He and an officer were billeted with a family in Chatelet at the end of the War. “The Belgique People are very nice and are proud to have two Australian soldiers stay with them”.

Four of my relatives served on the Western Front in the AIF.

My grandfather was wounded in action during the Battle of Broodseinde Ridge, near Ypres/Ieper/ part of Passchendaele campaign, Belgium. He returned home and later signed up for WW2.

My other grandfather's brother was wounded in action in the same area shortly after. He returned home, and later signed up for WW2.

My grandmother's brother was killed in action at Bullecourt France age 22. His sacrifice is commemorated on the Villers Bretonneux Australian National Memorial France, as well as the AWM Canberra.

My grandmother's other brother returned home.

During a trip to Europe in 2018, the 100th anniversary of the end of WW1, we were able to successfully locate places in France and Belgium of direct relevance to our family, that we wanted to visit, rather than travelling as part of say a group tour or packaged visit to “The WW1 battlefields”.

We were able to do that thanks to the wealth of information available on the internet, and helpful assistance from Australian Archives, Australian War Memorial, and Commonwealth War Graves Commission.  Much of this information only became easily accessible to the public as a result of the 100th Anniversary commemorative work.

Personal service records available via AWM and National Australian Archives show the dates and locations where the soldiers signed up, trained, when they left for overseas, where they went, were wounded, their next movements, and when the lucky ones came home. The wounded in action dates enabled tracing - with help of AWM - the particular battles they were wounded or killed in. The AWM’s book Anzacs on the Western Front contains summary details and maps of every battle on the Western Front that Australian troops were engaged in.

Among my own discoveries were the fact that many of Frank Hurley’s memorable photos of the devastation on the Western Front battlefields were taken in the area where two of my relatives were at the same time he was. And, my grandfather on my mother’s side and my other grandfather’s brother were wounded in action in the same field, days apart, decades before the two families became connected. 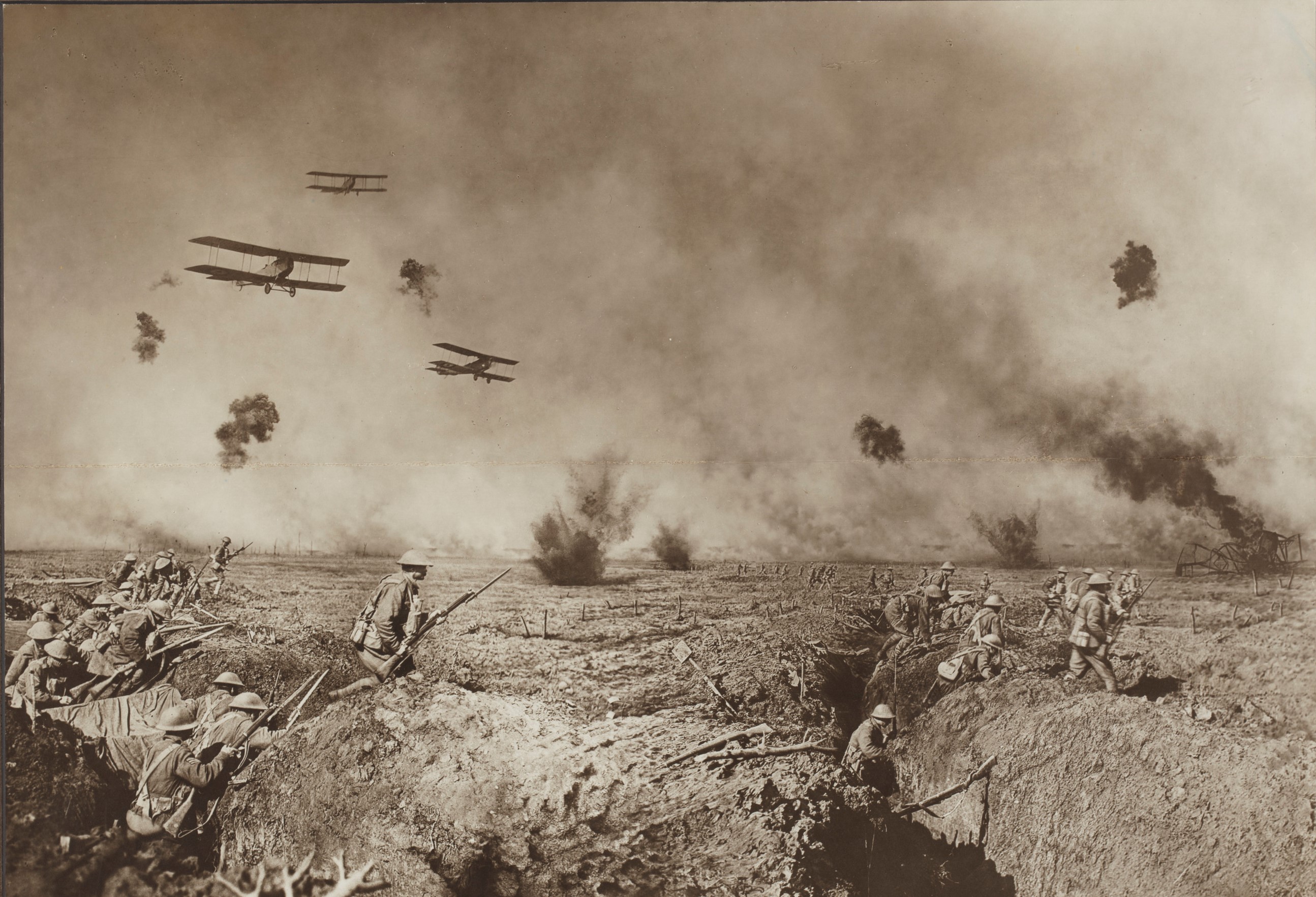 You might well ask: How on earth do you know the top photo of No Mans Land is the same place the bottom one was taken??

My grandfather’s service records give his battalion (1st Battalion) and the date he was wounded ”in the field” (4 October 1917).

Following the AWM’s directions, I walked from the Passchendaele museum in Zonnebeke along the trench line where the First Division AIF started from, along present day Berten Pilstraat (Berten Pil Street).

Their objective was the high ground of Broodseinde Ridge - where the line of trees are on the distant horizon in the photo below - which the British had not held since 1915.

The Australians achieved their objective and the AWM’s Anzacs on the Western Front says that the German Official History called Broodseinde “The black day of October 4th”. 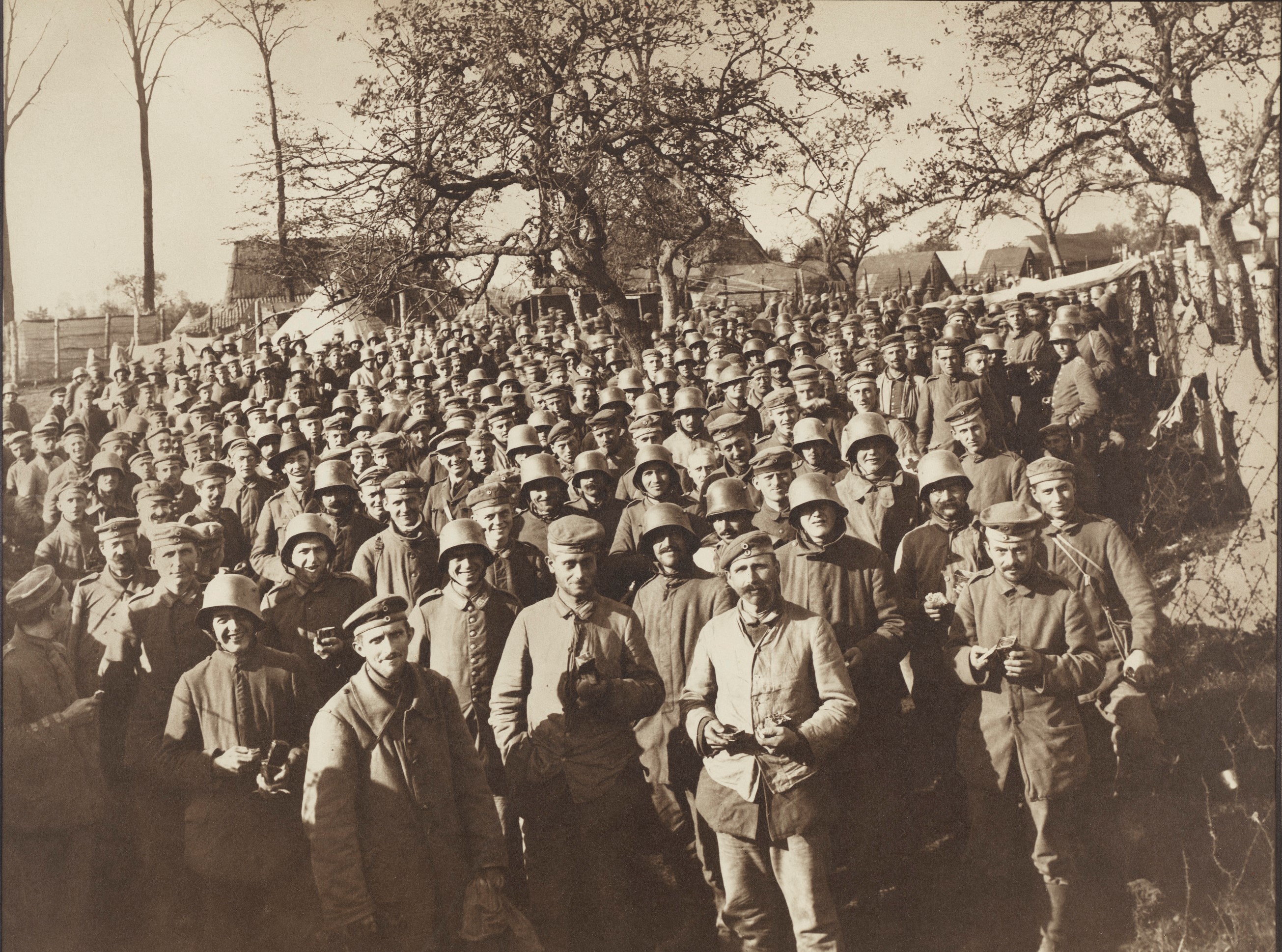 "A few Huns captured by the Australians at Broodseinde.". Item: e16997_0057_c, courtesy State Library of NSW

This plaque explaining the famous poem “In Flanders Fields” in Flemish, basically says that poppies bloom each year in the field where the battle took place.

Ieper (Ypres) Menin Gate - thousands attend the ceremony every night of the year (pre coronavirus).  I’d always wondered why all the troops went through the Menin Gate. The explanation quite simply is that Ypres is an ancient walled city and that is the road out of the town, towards where the Front was. 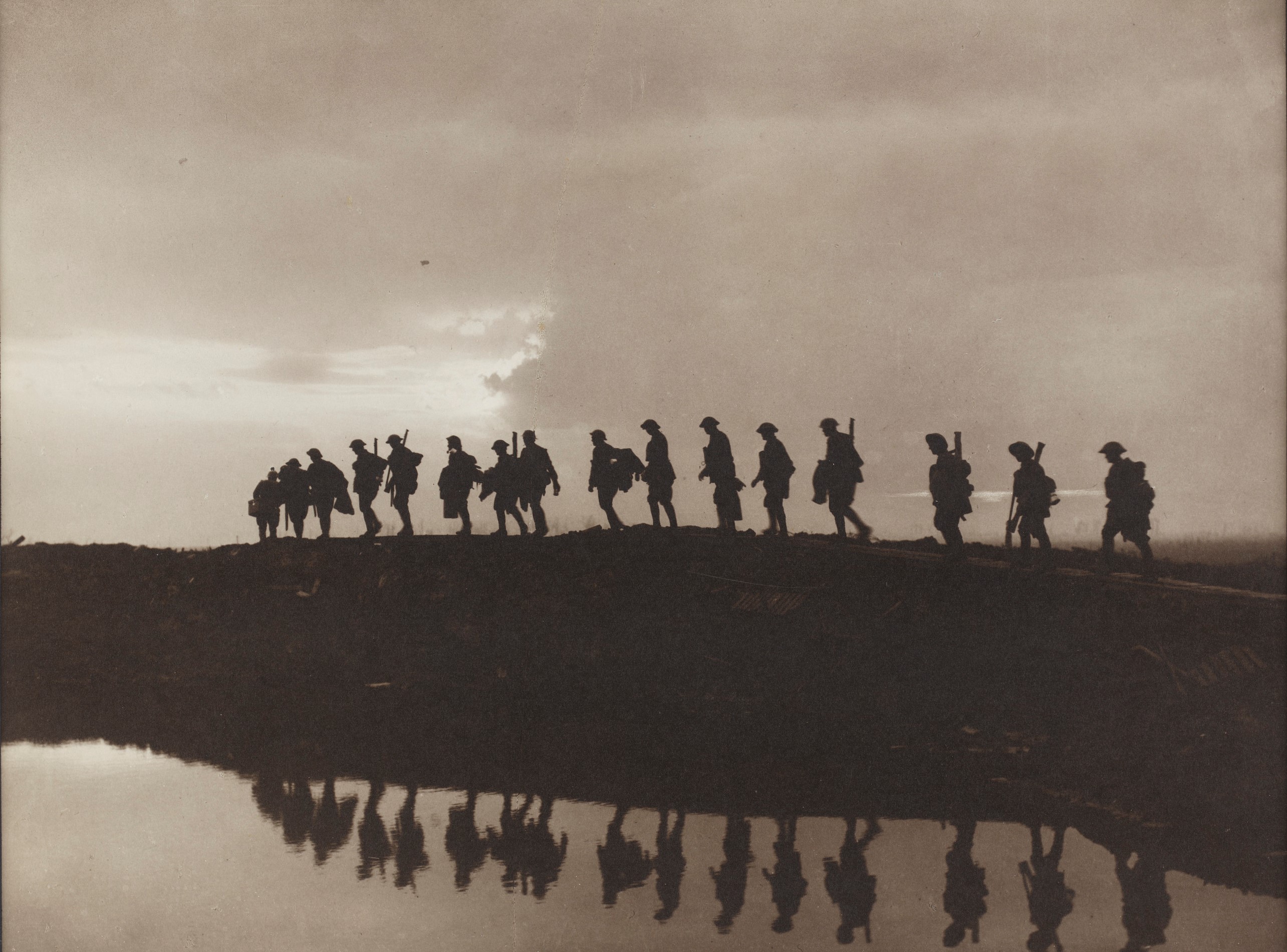 We had a beer for the boys while in Ypres.

Pozieres..where First Australian Division Memorial is located - dedicated to all those who served in the 1st Division AIF .

The fields where the first and second Battles of Bullecourt took place, where Tom was killed in the second battle, overlooked by the memorial statue.

Villers Bretonneux Australian National Memorial -  thanks to the CWGC I easily found my great uncle’s name on the wall, and in the Memorial Register.

Final photos are AWM maps and some brochures from the Passchendaele memorial - I particularly like the last brochure's cover (in French and German), with the children playing 100 years later. 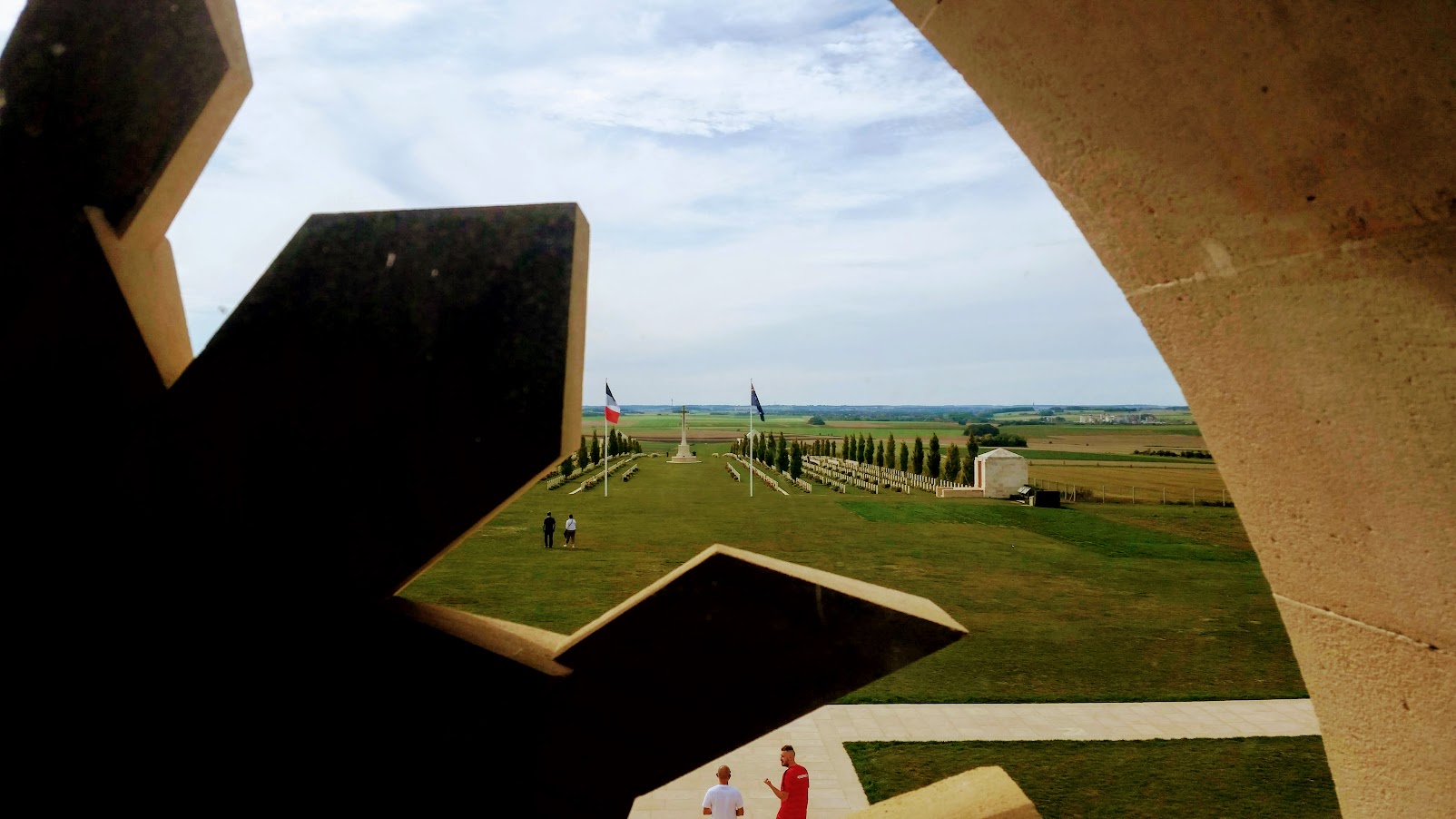 Australians are welcome everywhere on the Battlefields. A working knowledge of French (and Dutch) came in useful at times in the smaller places. Ypres, known to the Diggers as “Wipers”, now called Ieper in Flemish (pronounced Eeper), is a good base to tour from.

Interpretive plaques on sites describing battles often acknowledge the bravery of the German soldiers alongside the bravery of the Allies... they were all young men. The Allies war graves which are everywhere, are well cared for by the CWGC .  We didn't see any German graves but I later learnt that they are there, just not so prominent.

I was very glad I was able to go and pay my respects. I hope others can one day.

The areas in which the Western Front battles were fought are now peaceful rural areas. Today the countryside and villages are quiet and peaceful places.

All is quiet on the Western Front. Lest we forget.

My great aunt, grandfather’s sister in 1918

All quiet on the Western Front: https://en.wikipedia.org/wiki/All_Quiet_on_the_Western_Front

Verdi Schwinghammer’s Diary transcript State Library of NSW - For a first hand account of the conditions of the battle. Verdi and my grandfather’s dates, places and other aspects of their lives were similar:  http://acms.sl.nsw.gov.au/_transcript/2012/D16592/a5657.htm

The AWM photographer Frank Hurley took a lot of his famous WW1 photos around Passchendale showing conditions at the time my grandfather was there: https://mashable.com/2016/10/23/frank-hurley-on-the-western-front/

Not only did Great Uncle Len Sayers survive being wounded on the Western Front, recovering in England and being sent back to the Front, he went signed up and went overseas again in WW2 , survived and lived to an old age.

Here's a postcard he sent to my grandparents on active service in 1940 from "Ceylon". 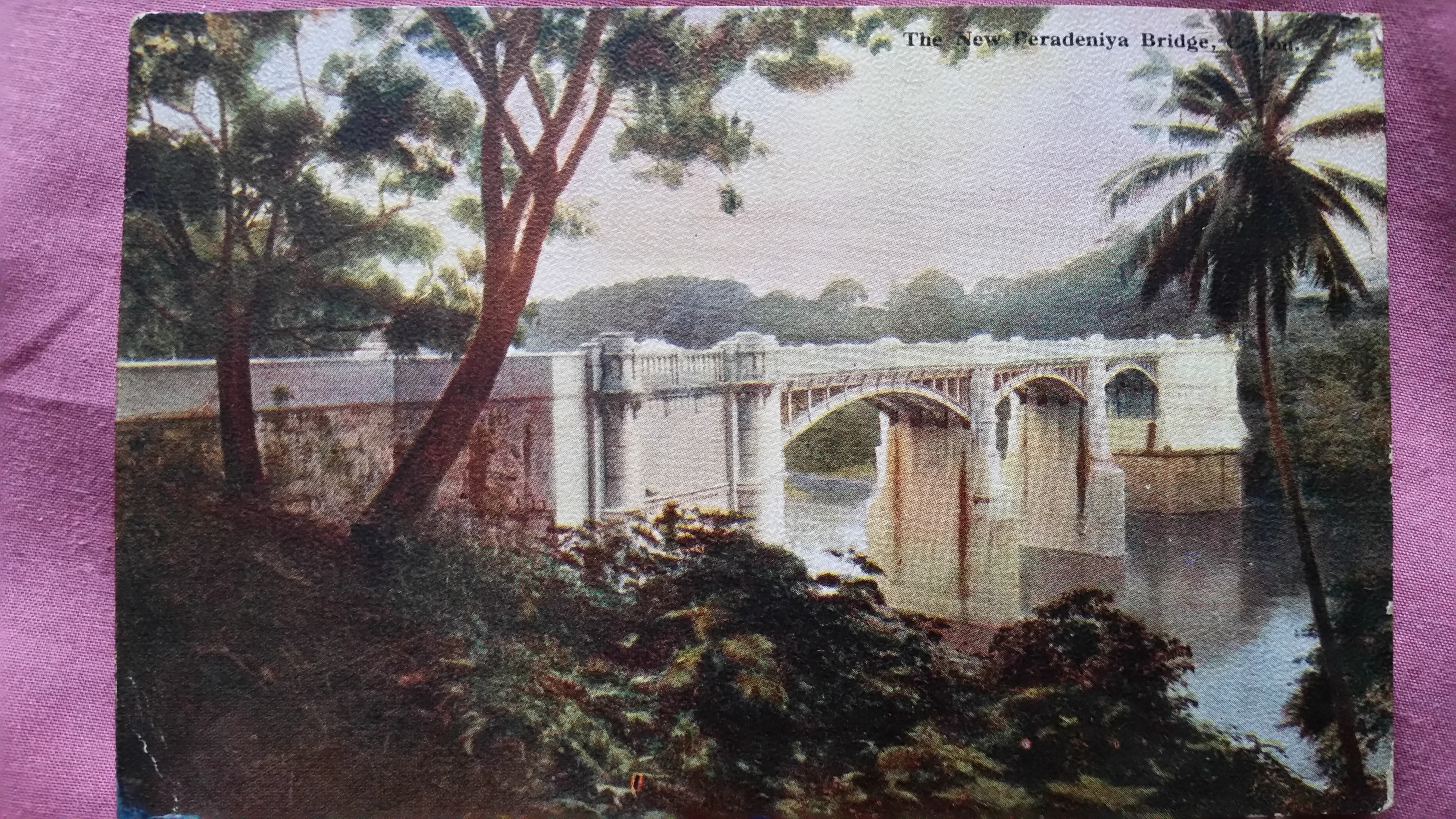 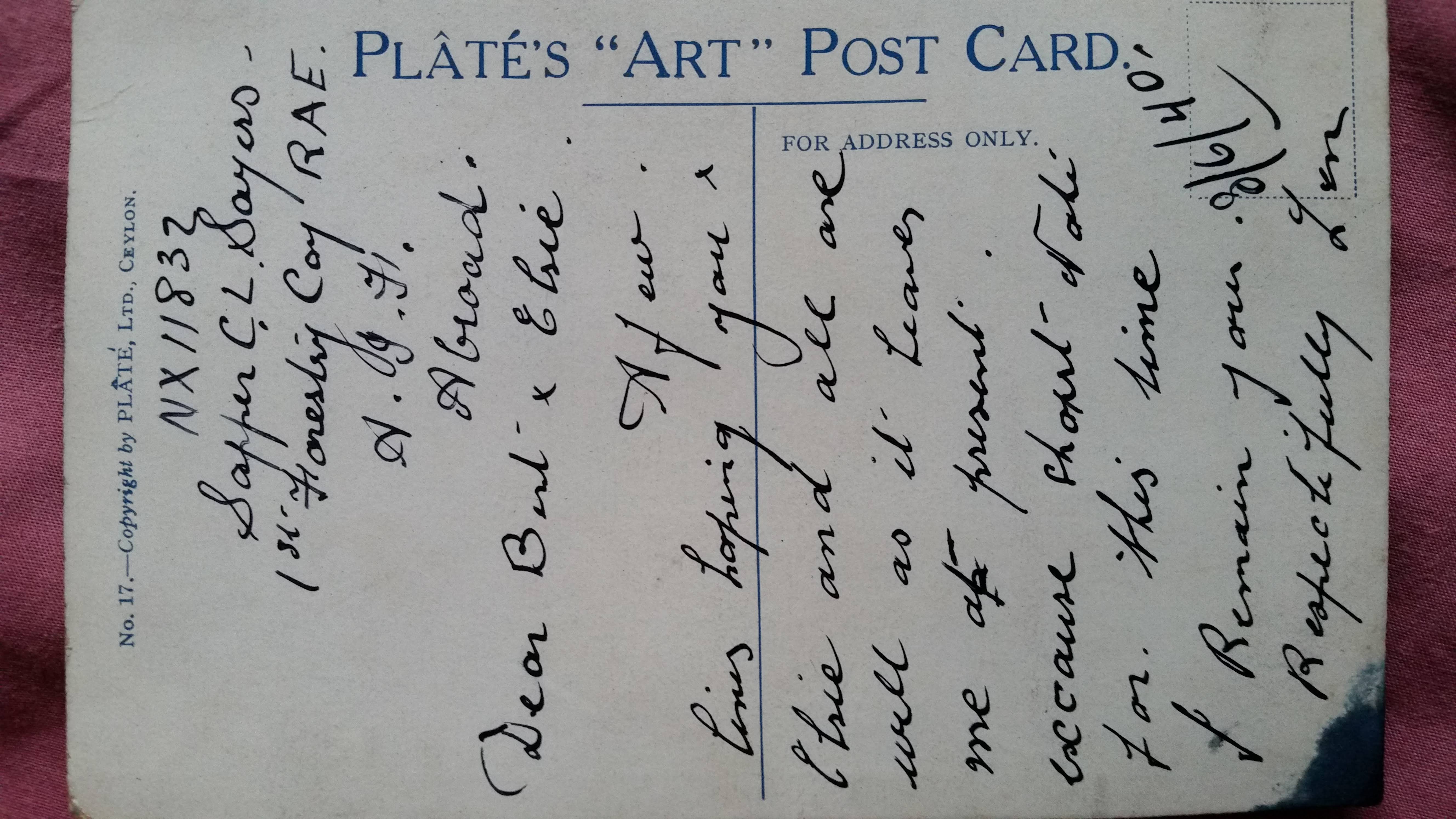 3 of the boys featured in 100 Years Article.