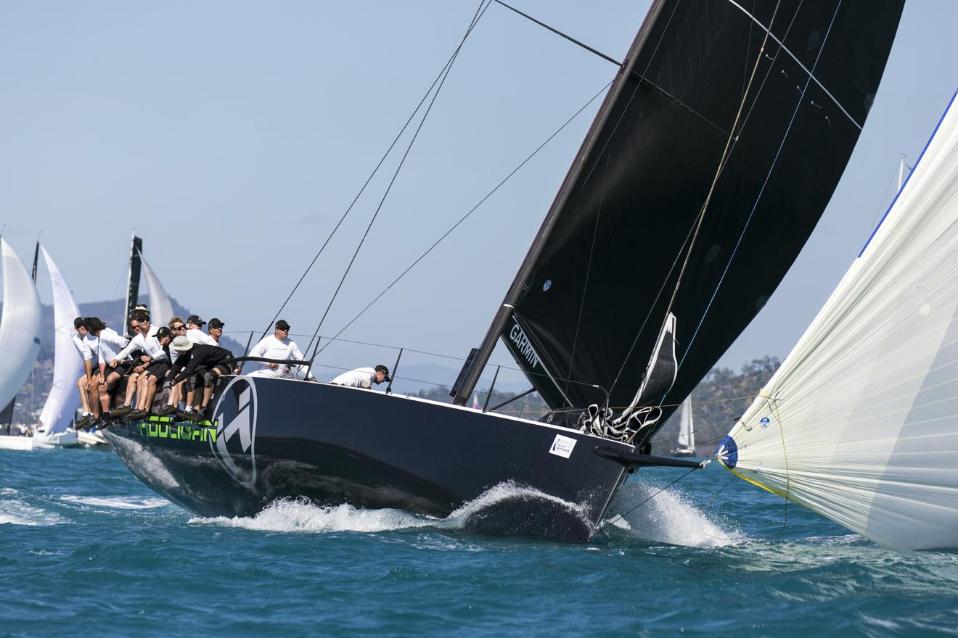 Second place went to the equally famous Condor (Sydney Hobart line honours in 1983 and 1986), which does charter duty in the Whitsundays these days, so her crew will be over the moon with their ex-skiffie skipper, Dave Molloy.

As forecast, Brett Whitbread’s Fareast 28R, Pipeline Drillers is the hotshot in the Performance Racing division and also for the Fareast Australian Championship title. The Queensland crew picked the winnings from both –their nearest rivals were Bill Trueman and crew on Goggo Chikara, a Murray30 Sports Boat from the host club by nearly 10 minutes.

Multihull fans were taking bets on their favourites in the Multihull Racing Division. Would it be a Kiwi or Aussie victory? That question was answered when the top three spots went to the Aussies. Last year’s winner, Ullman Sails skippered by local Paul Mitchell, won they day from NSW entry Morticia (Shaun Carroll) and Queensland’s MCJAK (Shaun Jackson). All in all it was a good day for Queensland competitors.

Race Director Denis Thompson was pleased with this new innovation: “It was a perfect breeze and everyone behaved – nobody was over the start early. A good first race – competitors will have had a good day out and will all be buzzing when they finish later this afternoon.”

Weather models are predicting more of the same for tomorrow, which will, without a doubt, make everyone happy. 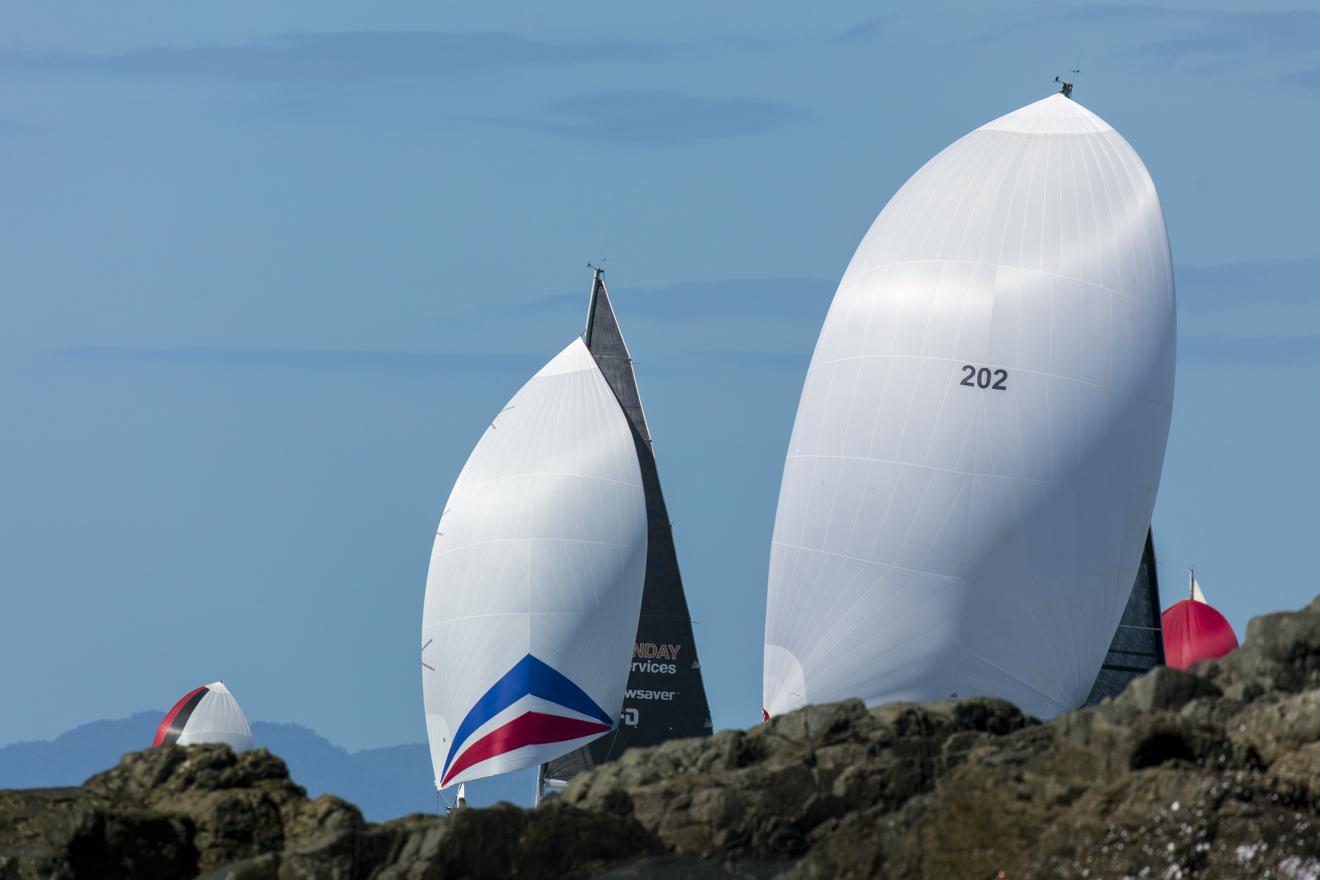 Light Airs Mix It Up At Airlie Beach Race Week

August 11, 2018
Competitors in Whitsunday Sailing Club’s 30th Anniversary Airlie Beach Race Week sailed in conditions quite different to yesterday’s when a light 7 plus knot breeze wafted across Pioneer Bay and beyond, giving the light air specialists their chance to shine in the game of concentration.

Unlike yesterday, Matt Allen’s Ichi Ban was off the start quick smart in clear air, but halfway up the beat, Philip Turner’s Alive (Tas) and Marcus Blackmore’s Hooligan had reeled the Sydney Hobart winner back in.

A little behind them, in a battle of the newer 40 footers, Ray ‘Hollywood’ Roberts’ Botin 40 Team Hollywood was going at it hammer and tong with Darryl Hodgkinson’s Carkeek 40 Victoire – neither Sydney yacht was giving any quarter.

But it was David Currie’s modified Farr 40, Ponyo, which make light work of the equally light airs to win the day from Team Hollywood. Only yesterday Marcus Blackmore predicted Roberts would come into his own and the Sydney yachtsman is currently at the top of the leaderboard with two races away.

“That was a very good day for us – must be because we had the Sydney Gold Coast winner with us (Bruce Taylor, Chutzpah) calling tactics and one of his crew joined us too. Our boat loves the light conditions, goes well, it didn’t enjoy yesterday’s hard reach,” Ponyo’s Victorian owner said.

“We went around the first mark with Victoire (Darry Hodgkinson, NSW) and Yarrandi (David Griffiths, NSW) was a reasonable distance behind us. The tide was interesting; it changed a lot later than forecast. It changed when we went round South Molle and we came home with it.”

40 versus 40 -Team Hollywood and Victoire - photo by Andrea Francolini, ABRW 2018

The bigger boats saw 13 knots, but mainly sailed in around 9 knots. Towards the end it averaged around 7-9 knots.

“We were trying to hang on to the Martin 49 (David Griffiths Yarrandi). They were sailing really well, and of course Flying Cloud is about the same size, but rate differently. As long as we weren’t too far out of touch, we knew we were doing reasonably well.”

It was not a day for the TP52s. Today, however, the tables were turned when Australian Sailing President, Matt Allen, sailed Ichi Ban to seventh place against Marcus Blackmore’s Hooligan in eighth – less than a minute between them on corrected time.

“Absolutely delighted,” Kompolthy said after winning. The weather was just perfect for us – made to order. We have a fantastic crew – a mix of guys and girls who all performed well - and it all seemed to fall into place.

“We passed a few cats and trimarans and kept track with one, so we were happy with that – it’s always nice when you see a monohull go faster than a multi,” he added laughing.

“Yesterday was too windy for us and we had a new Code Zero up that we hadn’t used before. I have to admit we saw the keel a few times – it’s still painted white!

“We had light to medium conditions and the currents were pretty strong in some places. It was best to sail out of the current obviously, so we hugged the shore.

“Initially we thought it was going to be a drifter, but no, it lightened and we saw a big boat sailing backwards with the spinnaker on – that’s what you get when you sail in the current,” Kompolthy finished.

Paul Ullman got away well again in the Multihull Racing aboard his Grainger Apex, ‘Ullman Sails’ leaving his adversaries to pick up the crumbs, as he and the crew representing the host club, added a further win to their victory of yesterday. They are well on the way to defending their title of last year.

“Using the right the sails at the right time and pointing in the right direction,” he says in their recipe for success. “We’ve only had one change in the crew from the last couple of years and that definitely makes a difference too,” the straight talking Ullman said.

Today he beat his older brother Dale, who skippered Morticia, a Lombard tri from NSW to second place. There was five minutes in it when handicaps were applied.

“Dale usually sails with me – but he’s skippering Morticia here. We are competitive together and separately,” he says of his brother.

Can Ullman Sails be beaten? “Everyone’s beatable,” Ullman states. “Morticia got an unlucky wind shift – there’s not much in it, in this fleet, believe me.”

Ullman doesn’t have preferred conditions, “We just need to get the simple things right and that in turn makes everything easy,” he ends.

Condor led the Cruising Division 1 fleet off the start, but it was Victorian Robert Green’s perfectly named Pacific 50, Dream, that won the day from a second Victorian boat, Gerry Cantwell’s Marten 49, Carreras.

For the rest of the fleet, it was a long day on the water. For those truly in cruising mode, it was time to enjoy the spectacular scenery and sun, with the odd whale tail spotted here and there.