First - only because people asked to see photos of it - Geoff modestly told of his investiture at Government House and presentation of his OAM by the Governor.  Geoff  pointed out that, besides himself, there were a total of 4 OAMs in the room and one AM   - Warren Young OAM, Jim Nicholl OAM, Brian Friend OAM and Russel Lansbury AM, making it a pretty august gathering...The meeting enthusiastically agreed with this, congratulating all on their service to the community.

The Surf Club has set up a Heritage Committee to manage its collection of important club memorabilia and historic photographs.

Currently the surf club is in discussions with council to have two plaques installed near the beach to inform locals and visitors of Avalon's significant role in two revolutionary developments in surf life saving methods and the sport of surfing.. These were the development of the IRB for surf rescues at Avalon Beach by surf club life member Warren Mitchell OAM in 1969 (50th anniversary this year), and the introduction of the malibu surfboard, whose manouvrability was first seen and appreciated by significant numbers of surfers after a surf carnival organised by the surf club for the US surfing team who were in Australia for the 1956 Olympics (The plaques will elaborate on these events). The plaques are being facilitated as a result of a visit to Avalon Beach by Ray Brownlee the new CEO of Northern Beaches Council, hosted by Avalon Preservation Association and the surf club.

Also during that visit Ray Brownlee visited the ABHS Office is Bowling Green Lane - which is open Saturday mornings for visitors to ask Geoff and John Stone about local history, or items including photos they bring in. John also can do amazing restoration work on damaged historic or faded photos.  To better inform locals and residents of the location of the ABHS office, the CEO has kindly agreed to have a council sign installed in Bowling Green Lane.

Geoff and Collette, Warren Young and Annette and I recently had a very enjoyable day on the Historic Hawkesbury Cruise run by Fantasea Cruises, recommending it to those interested.

A fascinating and interesting collection of local photos were then displayed by John Stone, with explanatory commentary by Geoff,  including photos not previously seen by members of local aboriginal caves, Trappers Way, and those shown below. They were enjoyed by all.

NB; The Dunes in 1972 images were courtesy of local historian, John Morcombe.

Geoff also showed photographs of the site of the present Ambulance station in 1972... previously it was a dog grooming salon, fish and chips prior to that and began life as a bread/cake shop, probably in the early 1950s.

A photo from the south looking north down Old Barrenjoey  Road towards the 'Dutch Garden' (later Ibiza) now Alma from around 1935.

And Avalon Parade with the Alvis looking towards the first service station in the late 1930s.

And an 1862 painting of Barrenjoey headland by H.G.Lloyd (Henry Grant Lloyd) .

Always an entertaining night.  Visitors and new members are welcome at the Bowlo. 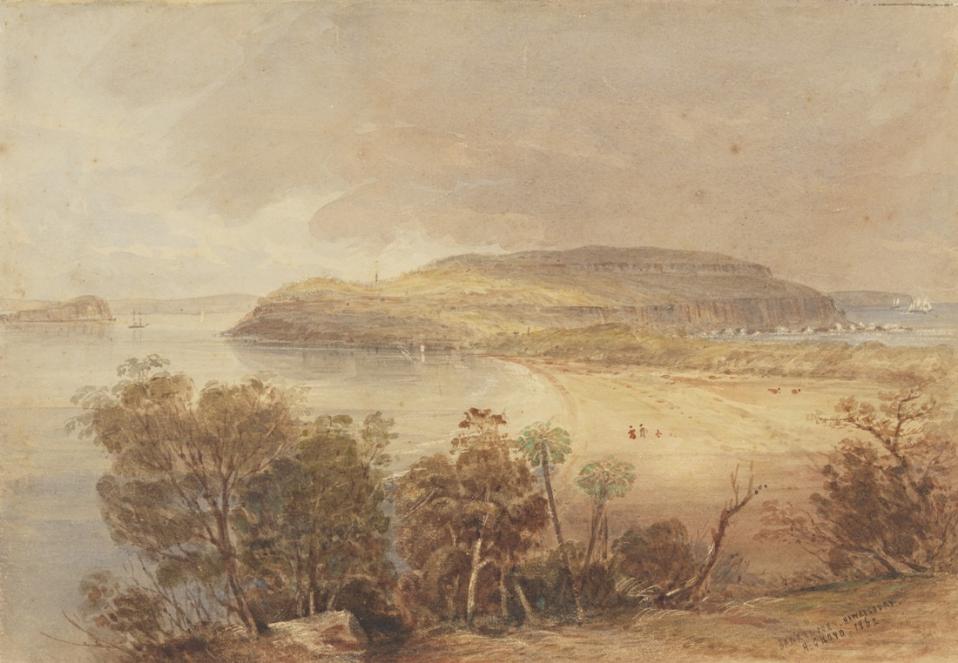 Henry Grant Lloyd (1830-1904), artist, was born on 6 January 1830 at Chester, England, son of Lieutenant Henry Lloyd, Bengal Native Infantry, and his wife Charlotte, née Williams. His father retired to Van Diemen's Land in 1840 and bought land at New Norfolk (up the Derwent river), which he named Bryn Estyn after the family home in Wales.

Henry Grant became a divinity student at Christ's College, Bishopsbourne, Tasmania, but in 1851 Bishop Nixon decided that he was not a suitable ordinand. In 1846-57 Lloyd sketched in Tasmania and by 1858 was painting in New South Wales. He was influenced by Conrad Martens and was probably one of his pupils. Lloyd painted sporadically in Martens's style until the 1870s but could not subdue his own spontaneous vision. In artistic style and temperament he was perhaps closer to Samuel Elyard than to the accomplished Martens. Lloyd may also have been influenced by J. S. Prout.

Much of Lloyd's early work is hasty and crude, with heavy over-painting and rather unpleasant colouring. In later years he sometimes used larger areas of clear wash, pale and delicate in tone, which with the white of the paper helped to achieve an air of simplicity and serenity. He also painted landscapes and rocks in deliberate contour patterns with stronger colours, but his figures and buildings are generally poor.

Many of his sketches are landscapes, a number of which are of historical interest and include his lithograph 'Hobart Town from the New Wharf' about 1857 and his view of the Canberra plains in 1862. He was usually meticulous in giving each work a date and title; many even have compass directions. He travelled and sketched widely in New South Wales and Queensland until 1864, Tasmania in 1872-75 and New South Wales in 1875-80. He had probably visited Britain in the 1870s for he exhibited Welsh sketches in Dunedin where he lived in 1881-99 and was a member of the Otago Art Society; he visited Australia in 1887-88. In 1900 he settled in Tasmania and died at New Norfolk on 31 May 1904.

Some 1500 of Lloyd's sketches are in the Mitchell and Dixson Libraries, Sydney, and a collection of his work is in the Allport Library and Museum of Fine Arts, Hobart.