For many thousands of years, Aboriginal people have been visiting Kings Park, which was previously referred to as Mooro Katta or Kaarta Gar-up, two of the many names for what is now known as Mount Eliza in Kings Park. It remains an important ceremonial and cultural place for the Indigenous people of Western Australia.

Two years after the settlement of the Swan River Colony in 1829, most of the area now designated as Kings Park and Botanic Garden was set aside for 'public purposes' by Lieutenant Governor James Stirling and Surveyor General John Septimus Roe.

In 1872 Governor Frederick Weld and Surveyor General Malcolm Fraser formally gazetted 175 ha of the 1831 reserve as a Public Park. An additional area of land was added to the park in 1890, essentially bringing it up to its current size of 400.6 ha.

John Forrest became Premier of Western Australia in 1890 and development of the park commenced in 1892. The park was fenced with gates at either end of a newly constructed Perth Park Road. Different sections of the road have since been renamed Fraser Avenue, Forrest Drive and Poole Avenue.

Forrest named the land 'The Perth Park' in 1895. In 1897 Perth Park Road was opened by Sir John Forrest and the area of the Park was increased to 1017 acres.

The large scene at the bottom of the first page of the illustrations represents a scene which took place some time ago and will be fresh in the minds of most of our readers. It is our intention to give a series of illustrations of the scenery of Western Australia, commencing with views in the vicinity of Perth, Fremantle and Guildford, and we begin with one from a drive on the Mount, which we venture to say, will, in the course of a few years, be known throughout most of the colonies for its beauty and interest. The view shows the planting o" the first tree by Sir John Forrest, in the presence of Sir Alexander Onslow and the large gathering which assembled on August 9, 1895, to witness what was really the formal dedication of the Perth Park to the public of the colony.

The scene is taken from a spot beside the old rifle butts, and has an extensive view liver Perth Water and Melville Water, while far away to the eastward runs the Canning River. The Park itself contains close on a thousand acres and has hitherto been little used. But the board in whose hands it has been placed have constituted a road running from the top of Mount-street, for a distance of about three miles along the brow of the hill overlooking the river to Crawley. The road is now nearly finished, and tree planting is proceeding both along the road and in other parts of the Park. When completed there is little doubt that it will form one of the most beautiful pleasure grounds in Western Australia. The task of connecting the Park road with the other made roads of the city is now in pi-ogress and the contractor hopes to have the work out of hand in three or four months. 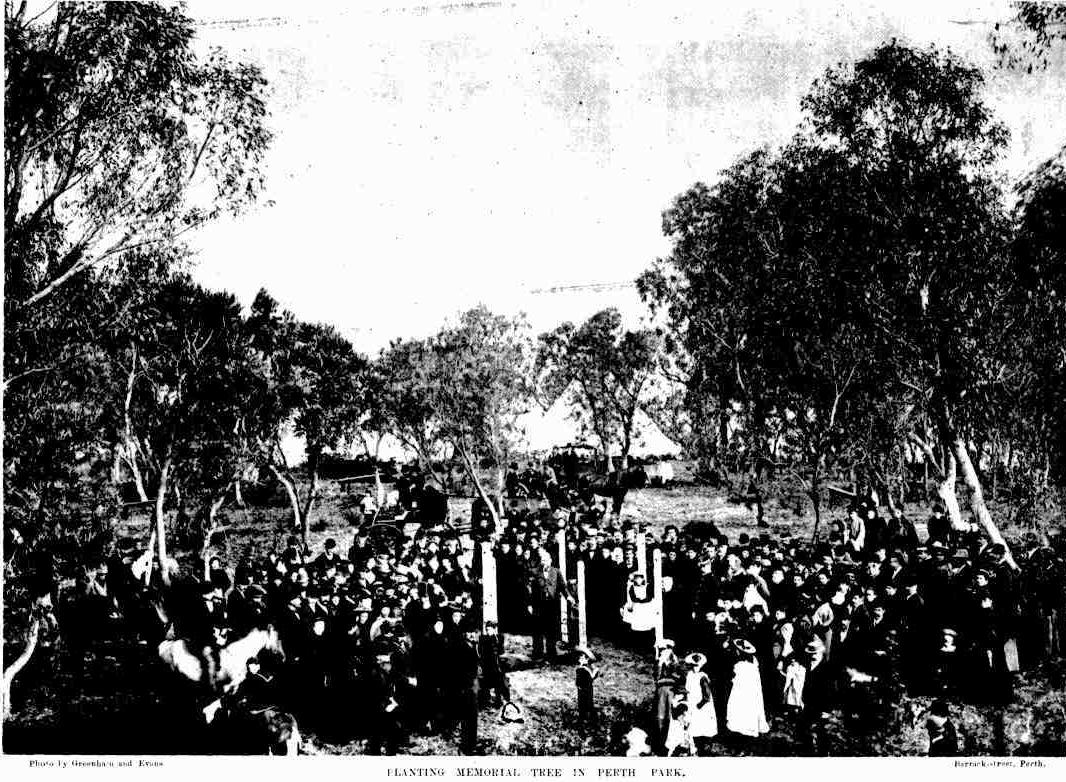 PERTH Park is gradually making its way into full existence. It is not so long since there was no Park, but soon it promises to be as well-known as the Mount itself. A better situation for a Measure ground could not be conceived. It is practically in the city, is elevated enough to command every breeze-a considerable advantage where summers are hot-and it commands a splendid view. Out over Perth and Melville "Waters there is an outlook at which the greatest grumbler could scarcely carp. The importance of securing the part of the Mount chosen and turning it into a park, was fortunately fully appreciated by Sir John Forrest, and the Government bought back the portion of the land carelessly alienated, for. £14,000-a sum not now excessive. That the land was ever parted with by, the Government of the colony was a pity, and its redemption was the only means of repairing the blunder. Other £16,000 have been spent on the land. The nett result is good. The opening of the Park-road on Saturday drew special attention to it, and those who visited the Park for the first time were greatly impressed by the beauty of the view and the possibilities of development in the Park itself. For the Park is one of those things that, can be unproved steadily for an indefinite numbers of years. Indeed, it can grow for almost as many centuries as the splendid old cathedrals of some of the cities on the Rhine. Few better gifts can be left to our successors than a pleasure ground of this size and so placed. In St. George's Terrace and the Park. Perth will contain two fine municipal show places, as any Australian city. But, if regarded in the more utilitarian light, the Park is a valuable asset merely as a health giver. The gospel - of fresh air is a gospel of the present day, and public parks are its natural corollary. Where cities have allowed themselves to be crammed with houses and factories till almost every spot of green has disappeared, they now regret the oversight and try to make amends by purchasing public parks in their outer suburbs to form "lungs," as they are unpoetically but forcibly called. Perth, however, will have no such need, for her 1,000 acres of park will, for long, be all she requires. Perth Park. (1897, August 27). Western Mail (Perth, WA : 1885 - 1954), p. 37. Retrieved from http://nla.gov.au/nla.news-article33143427

The name was changed in 1901 to 'Kings Park' to mark the accession of King Edward VII to the British throne.

Kings Park and Botanic Garden is a large park and bushland reserve in the heart of the City of Perth and is the home of Western Australia's State Botanic Garden. The reserve is visited by over 6 million people each year. With its remarkable expanses of unique bushland, tranquil parkland and botanic garden, the park is the most popular visitor destination in Western Australia.

Two thirds of Kings Park is bushland, making it an important conservation reserve in the urban area. The bushland is home to a diverse range of native wildlife and accessible by a network of walking trails. As you explore the Bushland Nature Trail, you see unique Western Australia trees including Tuart, Jarrah and Marri scattered throughout the bushland. Banksias, sheoaks and other small trees and tall shrubs make up a middle storey with a diversity of low, beautifully flowering plants forming the understorey. There are plants in flower all year round, with the peak between July and October.

The wildflower collection in Western Australia is the largest on Earth, with more than 12,000 species, over 60% of which are found nowhere else on Earth. These spectacular flowers colour the landscapes from coast to forest and city to outback. The six-month flowering season begins in the north in June and July on the vast outback plains of the Pilbara, Goldfields and Coral Coast where vibrant blooms contrast with pindan earth, rugged canyons and turquoise sea.

By September, the flower flush has moved south and reached Perth’s botanical gardens, nature reserves and national parks, finishing with a flurry in October and November throughout the forests and coastal heaths of the South West.

What you see here reminds you of bush-flowers found on the eastern seaboard but with slight variations in colour and size. Some of these photographed this Spring run below.

Kings Park and Botanic Garden is open to the public 24 hours a day, 7 days a week and entry is free. Find out more by visiting: www.bgpa.wa.gov.au/kings-park

Mangles Kangaroo Paw (Anigozanthos manglesii) - The State Floral Emblem is one of the most spectacular plants with its vivid red and green coloured flowers. Honeyeaters are often seen collecting nectar and so pollinating the flowers

Native Wisteria (Hardenbergia comptoniana) - One of the climbers native to Kings Park. It has attractive Wisteria-like clusters of deep purple pea flowers in spring. Look for its two green eyes!

Swan River Myrtle (Hypocalymma robustum) - This low shrub bears many lightly scented pink/mauve flowers along its branches in spring. Each flower has five petals and more than sixty stamens.

Blueboy (Stirling latifolia) - This strange shrub has buff blue leaves and erect brown to orange flower heads. The common name reflects the fact that plaster made from sand where this grew developed a blue stain

Prince of Wales feather (Ptilotus polystachyus) - According to the Australian Native Plants Society - there are about 100 species in the genus Ptilotus, all but one occurring only in Australia.