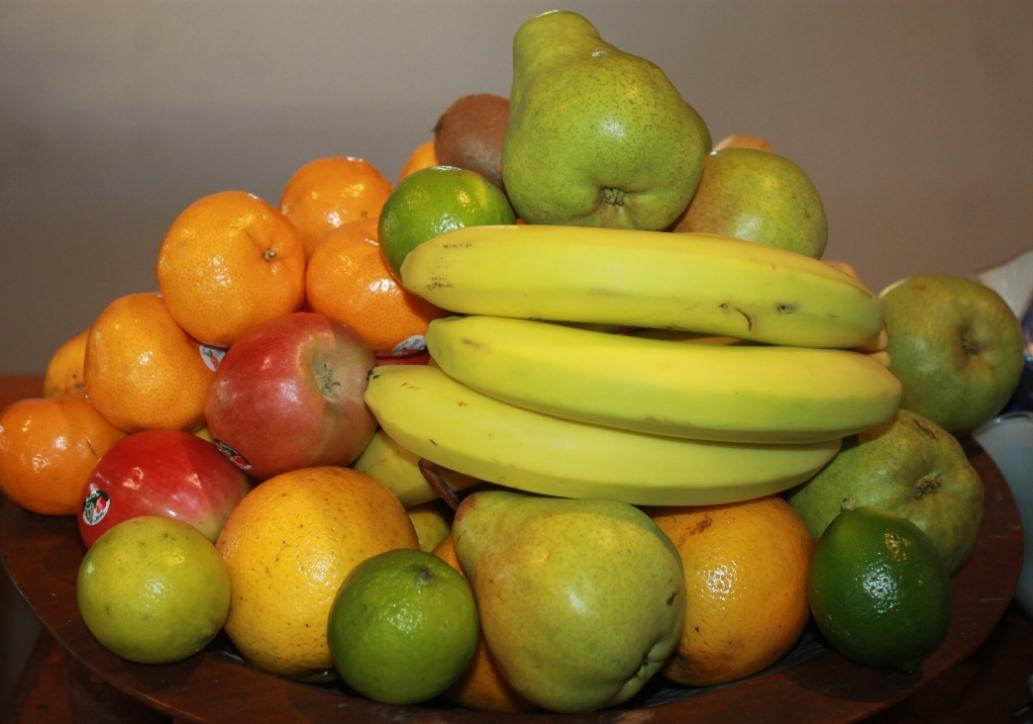 A fruit bowl piled with everything seasonal is a colourful invitation to good health. Just grab some seasonal health by choosing a piece of fruit and go!
In season at present – pears, apples, bananas and avocados – yes, avocados are a fruit!, or delicious citrus – navel oranges and mandarins, or for a handful of nuts, almond blossom season is upon us!
The almond blossom season is celebrated across many regions of Australia. The Willunga Almond Blossom Festival in South Australia runs on Saturday and Sunday July 30th and or visit the Mallee Almond Blossom Festival in Victoria on Sunday, 21st of August, 2016 – if you happen to be close by. The Almond Harvest occurs between February and April here, after they are harvested they are then allowed to dry before husks are removed. 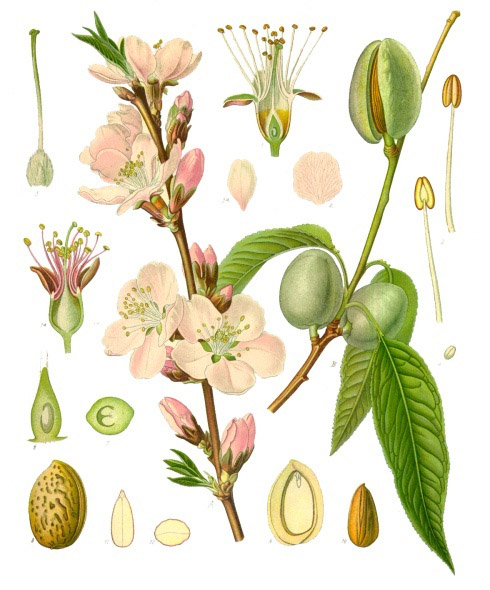 Almonds
The almond (Prunus dulcis, syn. Prunus amygdalus) is a species of tree native to the Middle East, the Indian Subcontinent and North Africa.
Right: Prunus dulcis - from Köhler–s Medizinal-Pflanzen 1897
"Almond" is also the name of the edible and widely cultivated seed of this tree. Within the genus Prunus, it is classified with the peach in the subgenus Amygdalus, distinguished from the other subgenera by the corrugated shell (endocarp) surrounding the seed.
Domesticated almonds appear in the Early Bronze Age (3000–2000 BC) such as the archaeological sites of Numeria (Jordan), or possibly a little earlier. Another well-known archaeological example of the almond is the fruit found in Tutankhamun's tomb in Egypt (c. 1325 BC), probably imported from the Levant. Of the European countries that the Royal Botanic Garden Edinburgh reported as cultivating almonds, Germany is the northernmost, though the domesticated form can be found as far north as Iceland.
The almond is a nutritionally dense food. A 100 gram serving is a rich source (>20% of the Daily value of the B vitamins riboflavin and niacin, vitamin E, and the essential minerals calcium, iron, magnesium, manganese, phosphorus, and zinc. The same serving size is also a good source (10–19% DV) of the B vitamins thiamine, vitamin B6, and folate; choline; and the essential mineral potassium. They are also rich in dietary fiber, monounsaturated fats, and polyunsaturated fats, fats which potentially may lower LDL cholesterol.[46] Typical of nuts and seeds, almonds also contain phytosterols such as beta-sitosterol, stigmasterol, campesterol, sitostanol, and campestanol, which have been associated with cholesterol-lowering properties.
Almond Kringle
A little bit naughty but very nice!
Ingredients
8 tablespoons butter, softened, divided
1-1/2 to 2 cups flour, divided
1 package (1/4 ounce) active dry yeast
2 tablespoons warm water (110° to 115°)
1/4 cup warm cream (110° to 115°)
2 tablespoons sugar
1/4 teaspoon salt
1 egg, beaten
1/2 cup almond paste
1 egg white, beaten
1/4 cup sugar cookie crumbs
2 tablespoons sliced almonds
Directions
In a small bowl, cream 6 tablespoons butter and 2 tablespoons flour. Spread into an 8-in. x 4-in. rectangle on a piece on waxed paper. Cover with waxed paper; refrigerate.
In a large bowl, dissolve yeast in warm water. Add the cream, sugar, salt and egg; beat until smooth. Stir in enough remaining flour to form a soft dough.
Turn onto a floured surface; knead until smooth and elastic, about 6-8 minutes. Do not let rise. Roll into an 8-in. square. Remove top sheet of waxed paper from butter mixture; invert onto center of dough. Peel off waxed paper. Fold plain dough over butter layer. Fold widthwise into thirds. Roll out into a 12-in. x 6-in. rectangle. Fold into thirds. Repeat rolling and folding twice. Wrap in waxed paper; refrigerate for 30 minutes.
On a lightly floured surface, roll into a 24-in. x 5-in. rectangle. In a small bowl, beat almond paste and remaining butter; beat until smooth. Spread lengthwise down the center of dough. Fold dough over filling to cover; pinch to seal. Place on a greased baking sheet. Shape into a pretzel. Flatten lightly with a rolling pin. Cover and let rise in a warm place until doubled, about 1 hour.
Brush egg white over dough. Sprinkle with cookie crumbs and almonds. Bake at 350° for 20-25 minutes or until golden brown. Carefully remove from pan to a wire rack to cool before slicing chunks to suit.
Pears
The English word “pear” is probably from Common West Germanic pera, probably a loanword of Vulgar Latin pira, the plural of pirum, akin to Greek apios (from Mycenaean ápisos), which is of Semitic origin (Aramaic/Syriac "pirâ", meaning "fruit", from the verb "pra", meaning "to beget, multiply, bear fruit"). The place name Perry can indicate the historical presence of pear trees. The term "pyriform" is sometimes used to describe something which is pear-shaped.
Pear cultivation in cool temperate climates extends to the remotest antiquity, and there is evidence of its use as a food since prehistoric times.
Pears are a great source of dietary fibre and contain small elements of all these (sort of like a big sweet green good for you lolly!:
Vitamins
Thiamine (B1),,Riboflavin (B2), Niacin (B3), Pantothenic acid (B5), Vitamin B6, Folate (B9), Choline, Vitamin C, Vitamin E,  Vitamin K,.
Minerals
Calcium, Iron, Magnesium, Manganese, Phosphorus, Potassium, Sodium, Zinc.
For those who want something hot for cold days:
Poached Pear with Vanilla Bean and Custard
Vanilla poached pears
500g caster sugar
1 vanilla bean
3 x 5cm-long strips lemon rind
1 cinnamon stick
4 firm pears (such as Packham)
Custard Ingredients
1 vanilla bean, halved lengthways
1 cup milk
1/2 cup pure cream
1/3 cup caster sugar
4 egg yolks
Custard
Scrape seeds from centre of each vanilla bean half. Place milk, cream, vanilla seeds and bean halves in a saucepan. Bring to the simmer, stirring, over medium heat. Strain milk mixture into a large jug. Discard vanilla bean halves. Whisk sugar and egg yolks together in a large bowl until thick and creamy. Gradually whisk into hot milk and cream mixture.
Return the custard mixture to a saucepan or double saucepan if you have one. Place over low heat. Cook gently, stirring with a wooden spoon, for 5 minutes or until mixture is thick enough to coat the back of the spoon.
Pour custard mixture through a fine strainer into a bowl. Stand bowl of custard in bowl of iced water, stirring frequently, for 10 minutes until mixture cools to prevent custard cooking further or 'splitting' on cooling.
Vanilla poached pears
Heat 4 cups cold water, sugar, vanilla bean, lemon rind and cinnamon in a saucepan over medium heat. Add peeled pears. Simmer gently for 20 minutes or until pears are just tender. Allow pears to cool slightly in syrup. Remove with a slotted spoon. Divide pears between serving bowls. Spoon over custard and serve. 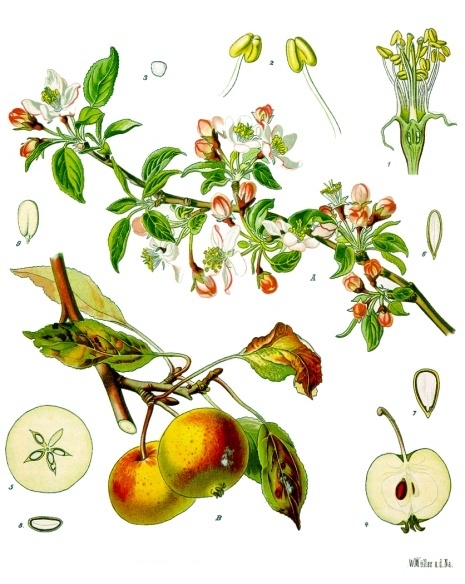