A Day To Remember And Celebrate In Pittwater 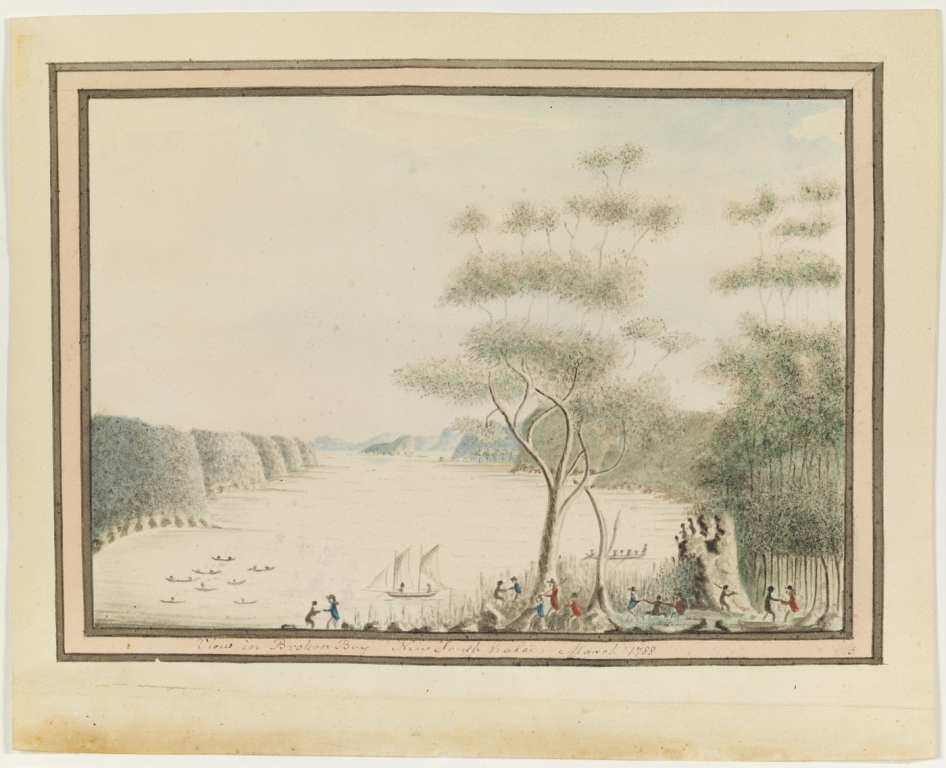 A Day to Remember and Celebrate in Pittwater
by Richard Pearse

Late in a cold wet and stormy evening on the 5th of March 1788, 232 years ago, Governor Arthur Phillip and Lieutenant William Bradley, with a party of marines and boatmen, rounded West Head, entered into the Southern Arm of Broken Bay and sought shelter from the wind and rain.

They had left Sydney Cove on the 2nd March to investigate the place that appeared to be a broken bay that was marked by Captain James Cook in 1770. They had found the bay that evening, named it Broken Bay, and began to assess its waters as a harbour and its land as a place for cultivation to support settlers..

As they sought shelter on the 5th in the Southern Arm they were welcomed by an old Aboriginal man and a boy. The man offered them a fire stick, then showed them water and a large cave in which they could be sheltered. Phillip decided the party would camp the night on ground near the beach which the old man helped them to clear.

On the next day the party continued their examination of the Southern Arm in their cutter and longboat. They observed several of the coves on the Western shore where they found a good supply of water in streams which flowed into the bay and also observed some waterfalls. They  then crossed to the Eastern shore where they found many canoes with women and men fishing. Here they landed and were shown how women fashioned fish hooks by cutting and grinding shells. Here the members of the party - officers and marines - held hands with Aboriginal people on the shore and there was a careful examination by each of the other. William Bradley recorded these greetings and the view of the bay from where he stood on the shore in his painting in his painting of the scene

Governor Phillip observed that the Southern arm, which he named Pittwater ,was “.. the finest piece of Water I ever saw ..” and judged “.. there are some good situations where the land might be cultivated.”

The next day the party continued to examine other arms of Broken Bay and then returned to Sydney Cove on the 9th March.

This year in 2020, 232 years later, Richard Pearse and Roberta Conroy, local residents and members of the Bayview Church Point Residents Association, retraced the movement of the party in Pittwater on the 6th March , the anniversary of the exploration of  1788. They report -

“”The weather was similar to that in 1788. The temperature was 24 degrees, the same as Bradley recorded in Fahrenheit on the same day in 1788..

As in 1788 the days before had seen gales and  heavy rain . but on the 6th  it was as sunny as it had been in the scene recorded by Bradley.

We travelled slowly under motor down the Western shore from Resolute Beach to Longnose Point. Much had changed! At Resolute Beach there were no Guringai people present but a party of teenagers swimming. The coves they saw are now the settlement on Mackerel Beach, the cabins at Currawong and the reserve and settlement at Coasters Retreat. But much thankfully is still the same. The hills and Portuguese Beach are as they were in 1788 thanks to the establishment of Ku-ring-gai Chase National Park.

We crossed to the Eastern shore in search of the place which  Bradley had  recorded in his painting in 1788.

There were no canoes or fishing people to be seen on this occasion, but we wove between moored yachts to the shore and met friendly local residents who were interested to know that Phillip and Bradley had visited this location two hundred and thirty-two years ago. They helped us to confirm that the scene Bradley had recorded in his painting was indeed created at the place now called Long Beach - the foreshore between Taylors Point and the Southern part of Clareville Beach. They felt happy to be living at the site where the first depiction of Pittwater was made.

The residents agreed with us too that this indeed was a day on which  the people of Pittwater should remember  and celebrate the first explorations of 232 years ago.

The account of the 1788 exploration is from Champion S., and Champion G. Journey to Broken Bay by Water:  2nd to 9th March, 1788, The painting by William Bradley is from  Bradley, William, A Voyage to New South Wales, facsimile edition,1969, Ure Smith, Sydney.