The first hot sunny weather of 2022 attracted people to the beach, including many visitors from out of the area, coinciding with reduced rostered surf patrol numbers due to some members reporting they were in Covid isolation.

The surf club's Club Captains Nick Sampson and Jason Dale, who spent all day on patrol on both days (as did some other members), sent out SMS and Facebook requests for additional assistance from bronze qualified members who could help out, knowing that several members were away on holidays like everyone else.

Available club members answered the call in droves and ensured that the public was well covered by patrols for the two busiest days of the weekend Sunday 2 Jan and Monday 3 Jan 2022.

"Club Captains myself and Jason are so proud of our amazing club today. It was a phenomenal effort from our rostered patrols also a huge thanks to everyone that responded to the SOS call to arms.

To the members that patrolled all day, you’re all legends. Morning Patrol that all stayed till 2:30 you're gems 👏Image

As a club we did at least 69 rescues today and around 300/350 preventives. Every single member who came down saved at least one life.

Our club ensured all those families made it home today safely because of your efforts.

Shout out to all the trainers and education team who had everyone prepared and rescue ready. "

Message Received from one of those families:

Many thanks for a swift rescue this afternoon. We got caught in the undertow and a nice lady helped me with a three-year-old until Nathan (Wellings) on a rescue board arrived who took the girl in safely. I and the other grandma were pick up by the IRB. All very neatly done. With a great outcome. Greatly appreciated by the whole family

Jason Dale said on Monday, "Brilliant work by all those on patrol today, both rostered, rostered that stayed beyond the rostered hours, and those additional volunteers that acted on a TXT for additional help.

For the second day in a row the northern beaches had a great mix of blue sky, swells, and reasonable winds all bringing to our beach high volumes of people. Add to the equation a sandbank at low tide everyone wanted to be on, a couple of rips plus a shore break at high tide that had plenty of people rolling around in the sand. With this all patrolling members involved brought their A game.

Those coming to our beach certainly were in the best hands. Efforts by those on patrol being called out by the general public as making them "feeling safe". Plus, visibly all lifesavers being "engaged & attentive" to everything across our beach, particularly between the flags."

Club President Bernadette Mackay who also patrolled both days, added her thanks and compliments to patrolling members: "You gave up your time with family and friends to protect the beach despite the number of Covid cases travelling through the community.

On both days, resources were deployed at the right time and all members were looking out for each other and were on standby to assist if required. It showed great respect to fellow members and good judgment in reading the situation. At one stage we had two simultaneous board rescues and 4 people being picked up in the IRB."

The Club also set up an outpost at North Avalon, where the strong rip which provides easy entry for boardriders, was also producing several rescues both by local board-riding club members and patrols and preventative actions for swimmers.

People who needed assistance were visitors or new residents, overconfident or unfamiliar with the fact that Avalon Beach is a dangerous beach. Avalon has a Danger rating of 7 out of 10 on the Australian Beach Safety scale.

For the inexperienced visitor, North Avalon in particular can look like a safe place when it is not due to the rip that runs alongside the rocks. While locals understand how the rip works, this can be a dangerous spot for those unfamiliar with these waters. Despite warning signs and the patrol presence, and visible rescues of people with their arms up for assistance, some people have to be warned in person and advised to go to the flag area.

Lifesavers put up flags on the beach to show where it is safe to swim. The yellow and red flags are a national symbol of where lifesavers would like you to stay, so you don’t get caught in a rip. Rips are where water is quiet on the top but a dangerous current is dragging you out from underneath. The flags mark the area where it is safe to swim. It is essential to swim between the flags, especially if you are not a strong swimmer.

Please, swim at a patrolled beach this summer and always Swim Between the Flags.

The main outcome was that no one lost their lives. It was a great team effort by ABSLSC's volunteer surf lifesavers.

Further info from Nick Sampson, one of the two Club Captains.

Final rescue stats for the whole weekend total 85.. including rescue numbers in am and pm each day and by rescue method, names in brackets are the Patrol Captains for each of the morning and afternoon Patrols.

Total 85 over the weekend

Rescues were carried out by IRB, rescue boards, and swimmers with tubes, and were of people in difficulty in rips at North Avalon, South Avalon, and outside the flag area in the centre of the beach.

Full list of names of those who volunteered and patrolled on;

*Duplication meaning they were across both patrols. 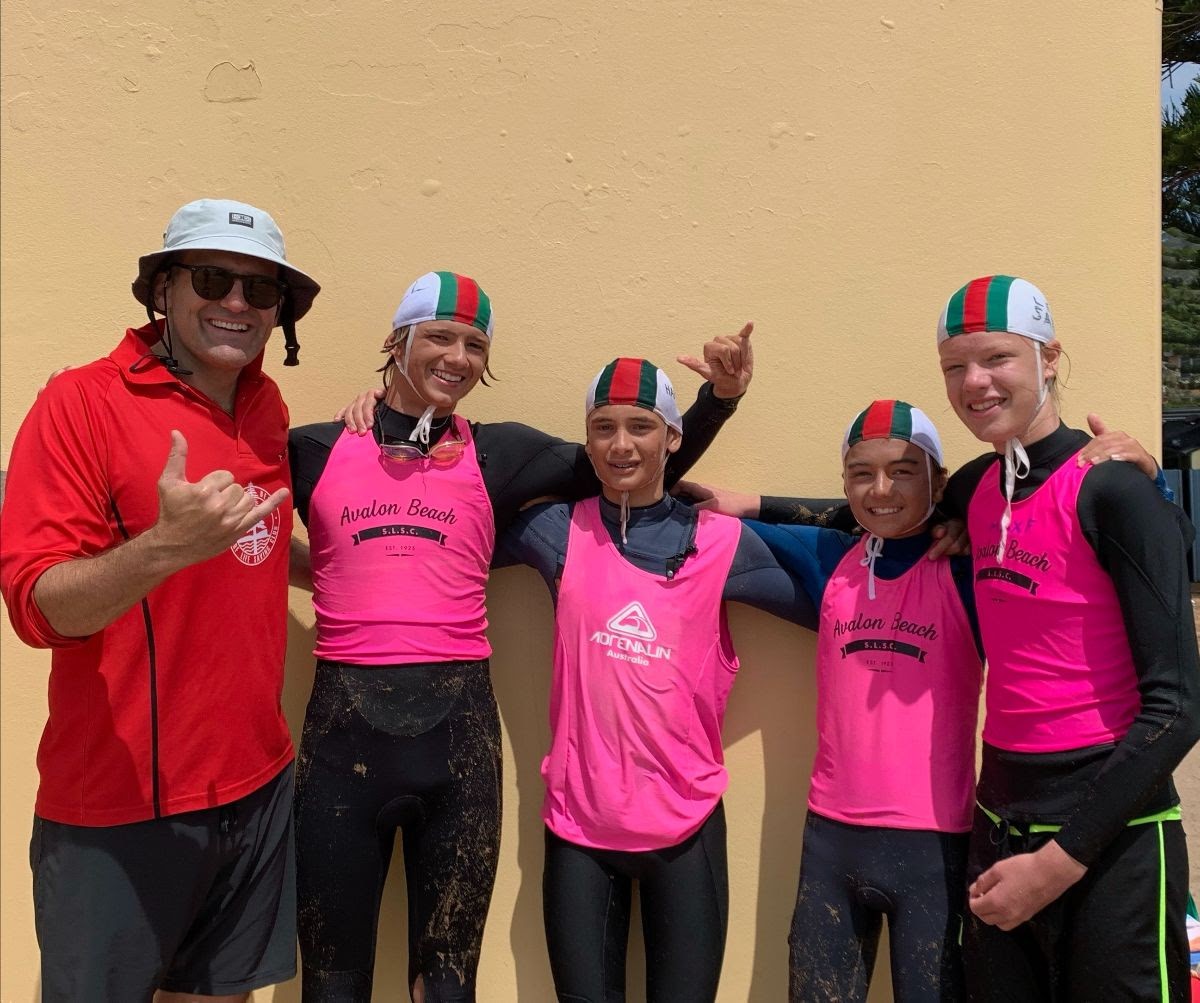 Just 2.5 weeks after completing his SRC assessment, Will (pictured next to Nipper Age Manager Tom Waters) participated in an after patrol hours rescue at Kiddies Corner, Palm Beach. A father and daughter were both caught in the unusually strong rip at kiddies and had drifted some distance and were still being taken out. Will and another surfer helped to bring the girl safely back to shore by taking turns paddling whilst she held on to their board. Other nearby surfers went to the aid of the father. Outstanding effort by Will and all the surfers that were able to assist this rescue.  We're so proud of you Will!