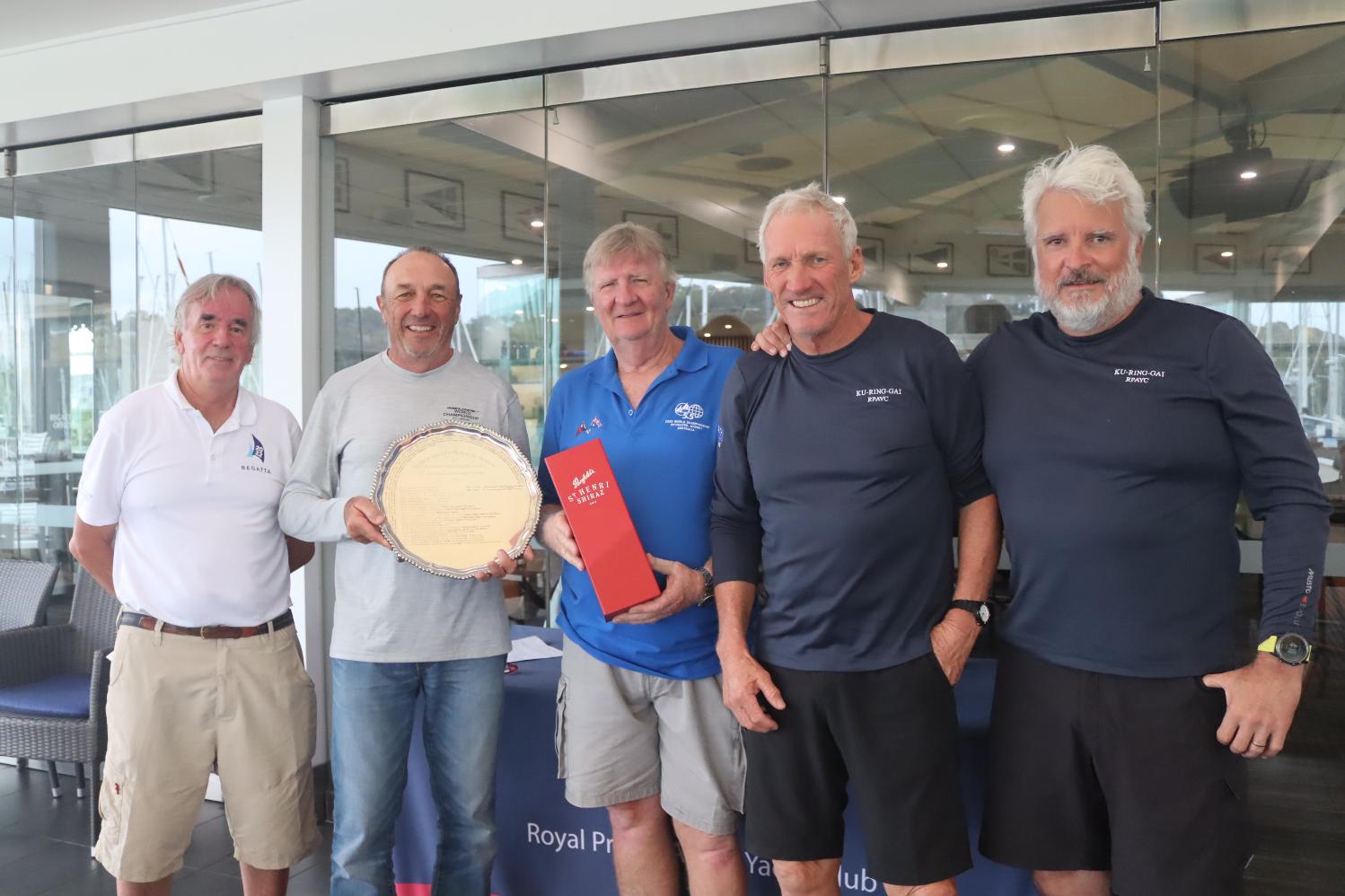 Winners of the 2022 5.5m Australian Championships

Commenting on the past three days of racing John said ‘After having the worlds here 2 years ago it has been great for the members to retain the fleet and to have such a strong fleet racing again this year. Next up for us is the Worlds in Europe which we head off to in June this year’.

It was a challenging and wet weekend, which kept tacticians and mark layers busy, as the rain cells dragged the wind backwards and forwards, from 0 to 20 knots, with a fleet again in the double digits, saw this class enjoy close racing on the beautiful waters of Pittwater.

On day one KU RING GAI 3 (John Bacon), showed what speed this 2016 Schmidt/Wilke Design modern 5.5 could achieve, recording a perfect score card after day one.

Day two saw the start boat burn through the fuel as the fleet tried to find somewhere on Pittwater with a steady enough breeze to get a race in. 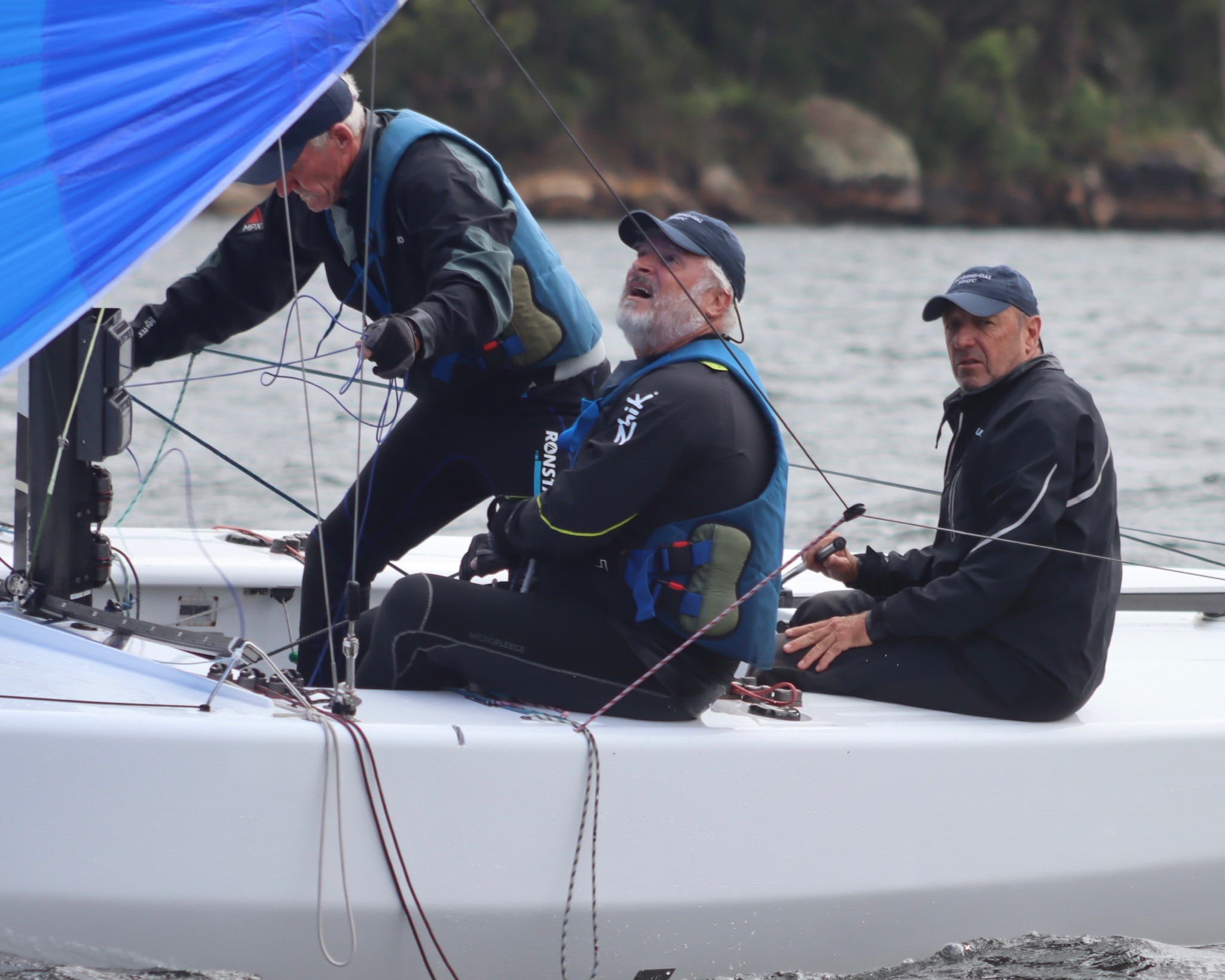 By 1430hrs, a course was set, however mid-way through the sequence a sizeable wind shift and increase meant that the first part of the race turned into a slalom race in 15 knots of breeze. A blanket could have been thrown over the entire fleet, which made the top mark and bottom mark rounding’s tight and competitive.

Enjoying the slalom legs was ALPHA CRUCIS (Bob Stoddard), this modern Schmidt/Wilke Design 5.5 is affectionately known as ‘the long boat’, given her huge overhangs. With class stalwart and former world champion Phil Smidmore onboard, they had the boat dialled in well, and won both races, taking the title of ‘boat of the day’.

By the end of day two, there was some major movement on the overall leader board. Punching well above their weight, and reviling in the shifty Pittwater conditions, saw KINGS CROSS (Scotty O’Connor) move into third place. A great achievement considering she is one of the oldest boats in the fleet, a Robert Miller (aka Ben Lexcen) design from 1968.

“This boat (Kings Cross) should have gone to the Mexico Olympics!” proclaimed a jubilant O’Connor.

An earlier start time was arranged for day three, with Race Officer Stephen Merrington scheduling four races to catch up on the regatta programme and take advantage of the forecasted breeze. He did just that getting 4 races away to conclude the Nationals as an eight-race series over the three days.

John Bacon and his team onboard KU RING GAI 3 produced another solid day with a 1,1,1,5 scorecard to take the overall championship win on scratch with a total of 15 points.

Following only 7 points behind was a gallant effort by RHAPSODY (Chris Hancock) who had another solid day of keeper races. RHAPSODY, a Luders design (1978), impressed many given both the boat and the owner’s vintage. 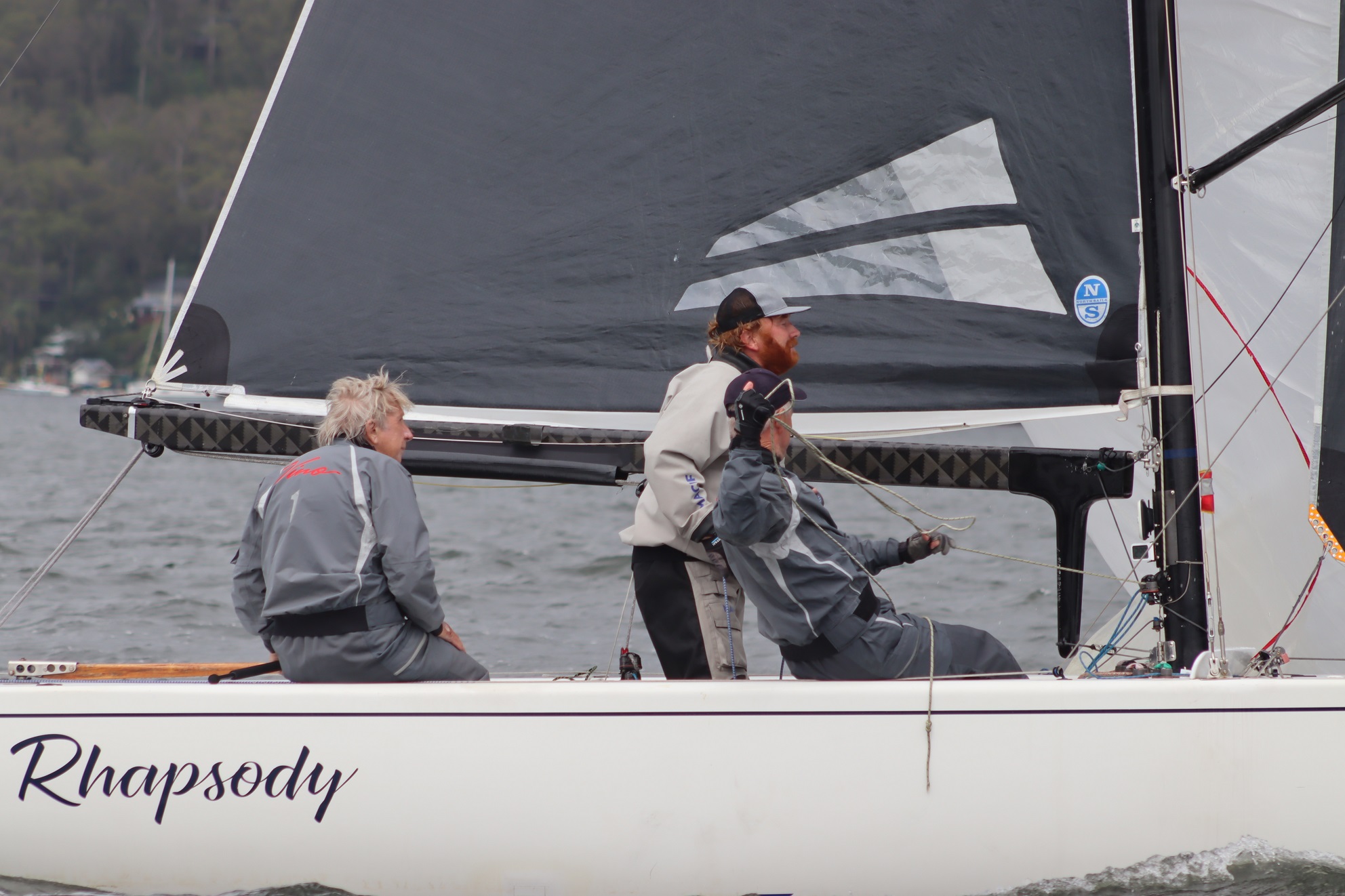 In third place saw KU RING GAI (Malcolm Parker) only 2 points behind, at age 27, it is great to have some fresh faces and youth join the class.

The unprecedented weather for this national event was both challenging for the competitors and the race management team. The race committee did a fantastic job to complete the series.

Racing continued for the 5.5m fleet during the week, with the remainder of events as part of the Festival of Fives, concluding with the Associates Trophy on Thursday evening as part of the RPAYC Thursday Twilight Series.

The 5.5-metre class was a redesign of the 6-metre class by Charles E. Nicholson in 1937. The first boats conforming to the 5.5-metre rule were built in 1949. There had been an earlier attempt to build a cheaper alternative to the Sixes. In 1929 the 5-metre class was established by the French "Union de Societes Nautique Francaise" and the class was accepted in London. It achieved a position as the smallest new international metre class and some hundreds boats were built. Nevertheless, the 5 metre never managed to achieve an Olympic status.

The 5.5-metre class replaced it quickly and was raced in Olympics for first time in 1952 Summer Olympics in Helsinki. The Scandinavian Gold Cup has also been competed with 5.5m boats since 1953. 5.5 metre boats replaced the International 6-metre at the 1956 Olympic Games held in Melbourne, Australia.

The 5.5 metre participation in the Olympic sailing events continued at the 1960 Olympic Games and 1964 Olympic Games, at which former RPAYC member Bill Northam won the gold, Australia's first gold medal in sailing, aboard the Barranjoey, with crew members Peter O'Donnell and Dick Sargent.

The RPAYC looks forward to hosting the 2023 Australian Championships in February next year. 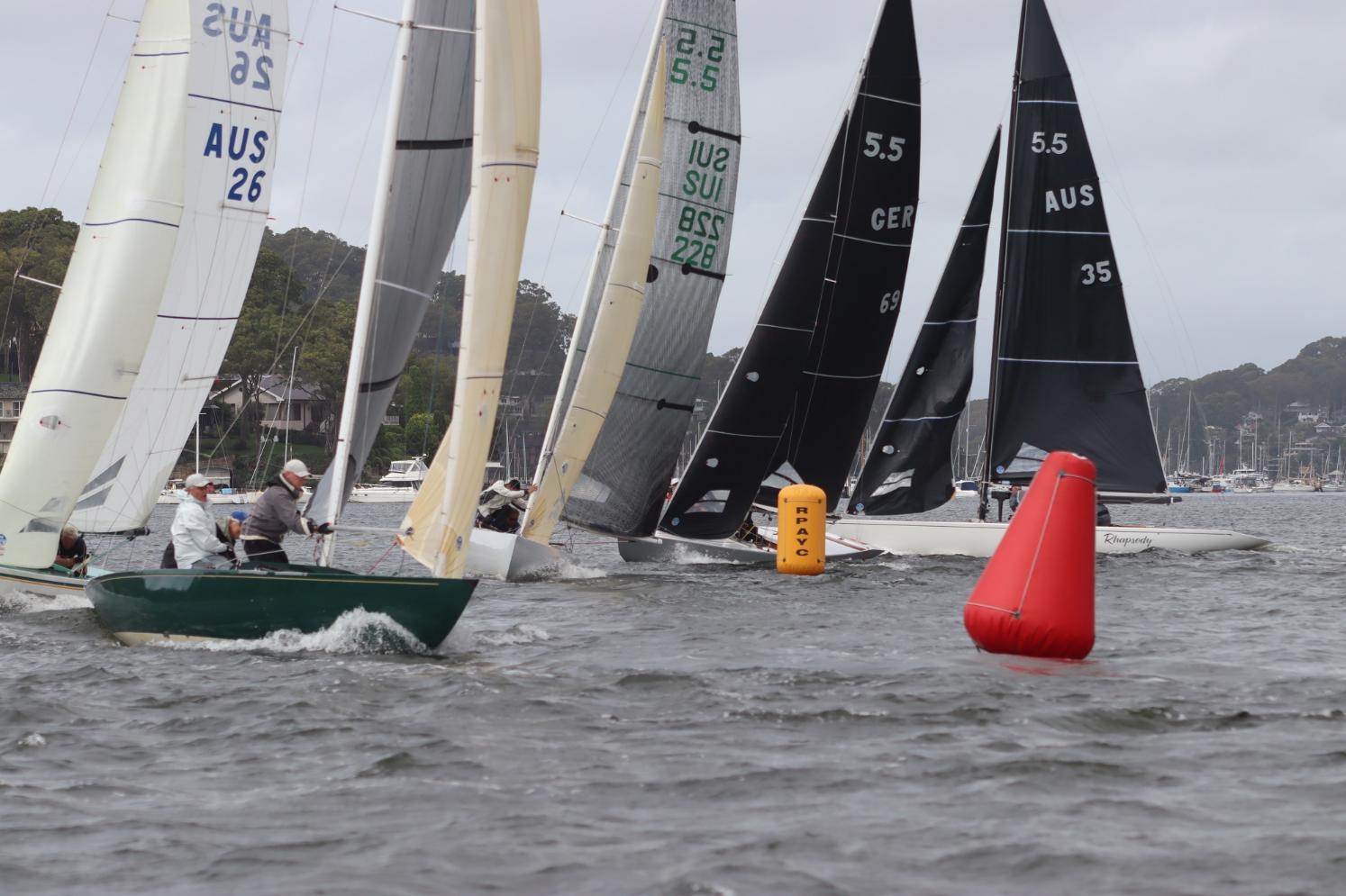 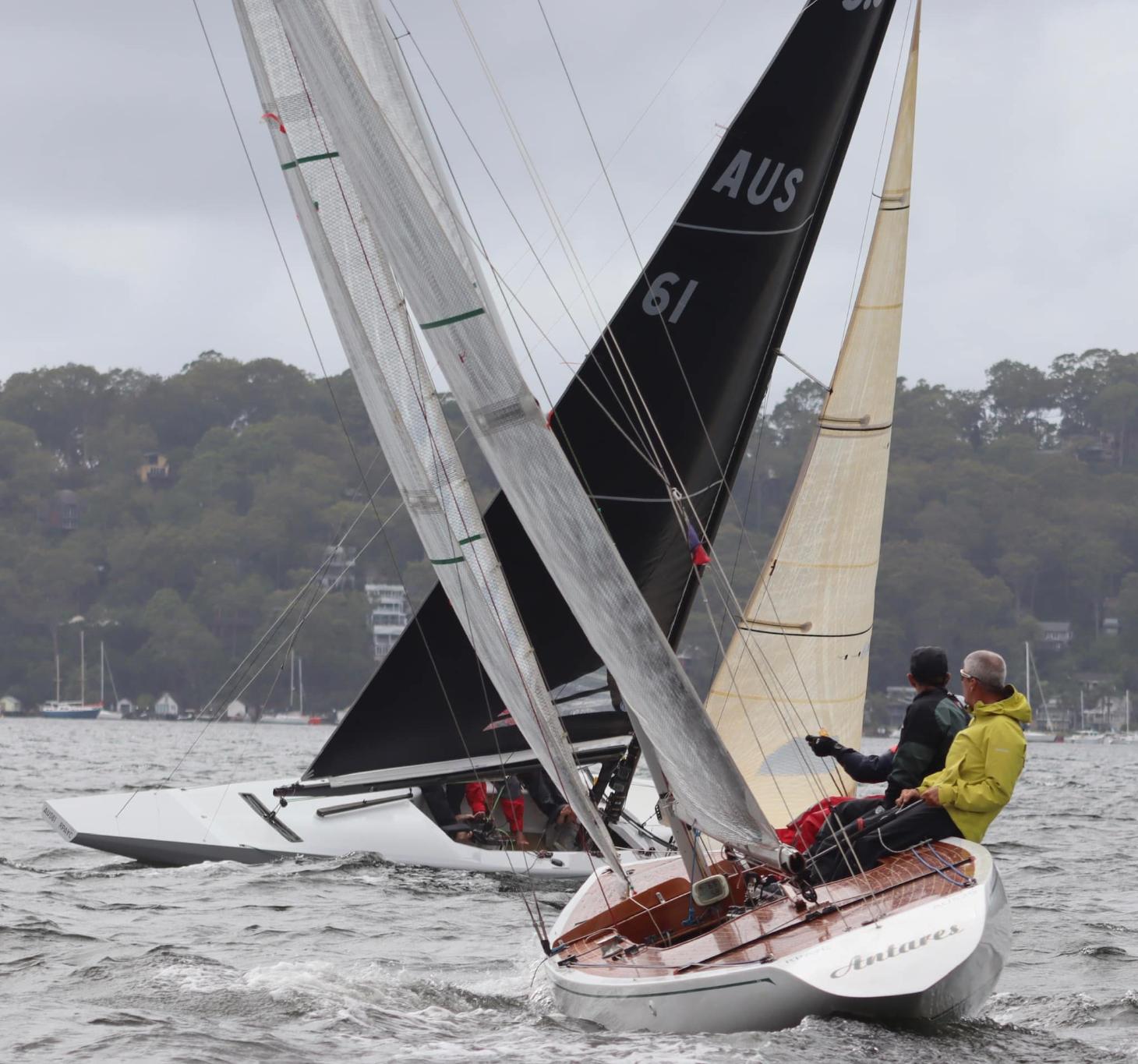