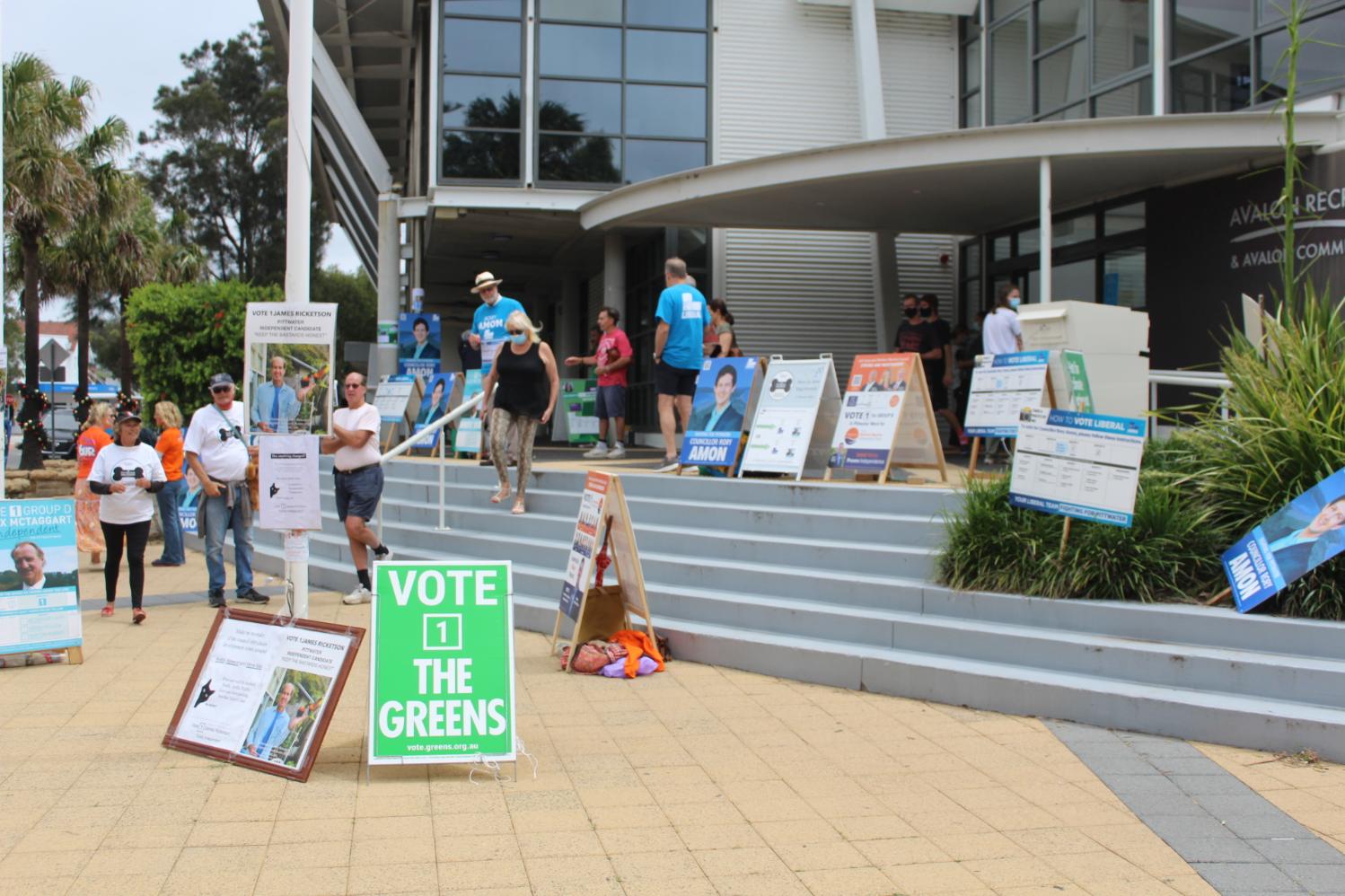 Outside the Polling Booth in Avalon Recreation Centre, Saturday December 4th, 2021
With the distribution of Preferences on December 21, 2021 the results of the Local Government election for the second term of the Northern Beaches Council, formed when Manly Warringah and Pittwater were forcibly amalgamated in May 2016 by the NSW State Government, have been announced by the NSW Electoral Commission.

''The votes are all counted and I'm delighted and very honoured to say I've been elected as a Pittwater Councillor!

Thank you so much to all those in the community who've placed your trust in me and the Greens.

Secondly, I'm so grateful to the Greens campaign team who've worked so hard in so many ways for this - everything from doorknocking and design work to letterbox dropping and talking to voters at polling booths.

I'd also like to pay tribute to the many ordinary residents and members of community groups who've shared their experiences and wisdom with me over the years. I've learnt so much from them and hope we can all work together during my time on council.

I'd also like to acknowledge and thank former Pittwater MP and Mayor Alex McTaggart for his commitment to the community over so many years.

And to my family, especially my husband Simon - who's kept things running on the home front throughout a very long campaign - and kids, all my love and thanks for your incredible support!

On another note, I'm also delighted that Kristyn Glanville - Greens, our Greens candidate in Curl Curl, has been elected too! Her experience as an environment and planning lawyer will be invaluable on council in what will be the most significant work of the next term - developing the Local Environment Plan. However, as a grassroots based party, our decision making as councillors will be based on not only the input of party members but also the wider community.

Finally, I will do everything in my power to protect Pittwater's precious environment, maintain and enhance our low-rise villages and support the community. And whilst I know many of us on council will differ on a variety of issues, I'll be working towards finding common ground and creating a cooperative, transparent and responsive council.''

''Thank you to the wonderful Community of Pittwater.

Thank you for putting your confidence and trust in me, and electing me to represent you and Pittwater on the Northern Beaches Council. I feel truly privileged and incredibly thankful to you all, and I look forward to working with, and advocating for the entire Pittwater Community over the coming years.

Throughout the campaign, my focus and my mindset was - that if I should be so honoured to be elected by the community, I would always put the community first – before party politics or agenda. My reason for running, reflects the direction and ambition for what I hope to achieve – to advocate for the concerns of families and the interests of local business. I am passionate about working closely with the Community, the Mayor, the Councillors and the Council to build a more liveable, vibrant, environmentally sustainable, and supportive community, while striving to provide the best possible services, amenities and outcomes for the entire community.

If I may take the opportunity to say thank you…

I would not be in the position I am today, if it weren’t for my running mates Sarah Turnbull and Ian White - their passion and dedication for our community is second to none, and of course Michael Regan and the entire Your Northern Beaches Independent Team for all the guidance, support and the incredible dedication to our Northern Beaches Community, our way of life, and our aspirations.

And of course, I save the biggest thanks to my top supporters - and at times rightful critics, my wife and best friend Liat, and the kids, who without their love, backing and patience - this would not have been possible.

To the Pittwater Ward community, you have already helped me to start to create a ‘do-list’, and am ready to listen and be your voice. I look forward to meeting you, and working with you all in the future.

Pittwater Councillor Rory Amon posted on his Facebook page immediately after the election and prior to preferences being allocated:

''Thank you to all my volunteers, street-stallers, leaflet deliverers, prepoll and Election Day workers, your countless hours invested on our campaign, and your tireless support. Thank you to Karina Page and Philip Longley for standing on our team - you are the very best of of community. Thank you to all residents who supported us.

Whether or not you voted for us, I will do my best to represent you in Council as we fight together for the best interests of Pittwater.

It’s been a privilege to serve on Council for the past four years and I’m looking forward to the next few.

But, for now, after a gruelling four week campaign, it’s back to work at the day job as a family lawyer.''

This Local Government Election was marked by the large number of 'above the line' votes for political parties rather than individuals. The statistics for those who stood to represent Pittwater were:

For the other Wards those who will represent residents are:

This means there will be 6 Councillors from the Your Northern Beaches Independent Team, 5 from the Liberal Party, 2 from the Greens, 1 from Good for Manly and 1 Independent.

Full results for all other Wards, Manly, Curl Curl and Frenchs Forest, may be accessed at: vtr.elections.nsw.gov.au/LG2101/northern-beaches/results

Statements received by Candidates in the run up to this Local Government Election may be read at: www.pittwateronlinenews.com/Local-Government-Election-2021-Candidates

The Municipality of Manly was first incorporated on January 6th 1877, being the first local government authority on the peninsula with Thomas Rowe, father of Harry Ruskin Rowe, becoming the first Mayor. On March 7th 1906, the Warringah Shire was proclaimed by the NSW Government Gazette, along with 132 other new Shires. This LGA ran roughly from Broken Bay in the north to Manly Lagoon to the south, and by Middle Harbour Creek and Cowan Creek in the west. On May 2nd 1992, The Governor of New South Wales proclaimed the establishment of the Municipality of Pittwater, the area of which roughly followed the area formerly known as 'A' Riding of the Warringah Shire, commencing on the northern side of Narrabeen Lagoon and running to Palm Beach and west to Ingleside and Elanora Heights. On July 1st 1993, with the enactment of a new Local Government Act 1993, the municipalities of Manly and Pittwater were renamed "Manly Council" and "Pittwater Council" and Warringah Shire Council became "Warringah Council".