February 15, 2020
By The Australian Sailing Team

Aussies have dominated the podium at the Nacra 17 World Championships, with the brother and sister duo of Nathan and Haylee Outteridge claiming silver, and cousins Jason Waterhouse and Lisa Darmanin, the bronze.

Great racing was the key ingredient of the last day of regatta, and even the wet weather could not take the shine off the results. The Sou’wester held sway all day delivering 12-21 knots and rain as the afternoon wore on, but action, excitement, and the battle for supremacy were far more the talking point.

Although the Outteridges were the overnight leaders in the Nacra 17 class, it was Waterhouse and Darmanin who shot out early to take the first of the two Gold Fleet races of the day. By the time both of those were completed they had climbed into second place, 13 points astern.

In the stiff breeze that was on offer for the medal race, neither of the two Australian crews started well. The British crew of John Gimson and Anna Burnet took the lead on the first upwind leg, and were never headed from there. The Outteridge team finished in ninth, which left them just one point behind the Brits when all was said and done.

Nathan Outteridge said after racing, “It has been a really good week for us. Today is a bit of disappointing end to it, especially as we had that lead. To lose the Worlds by the one point is tough. At the end of the day if you don’t get the result you want, then it hurts. Despite that, it was fun to sail at the kind of level we did. I know we stepped it up to what was needed, and just could not close it out.”

Lisa Darmanin said once back ashore, “It was a pretty tough week at Geelong. We sailed well today to give us a shot at taking out the Gold. We are pretty happy and pretty proud of our two Bronzes at two consecutive World Championships. We have really developed as a team, and I think we’re working better than we ever have.” 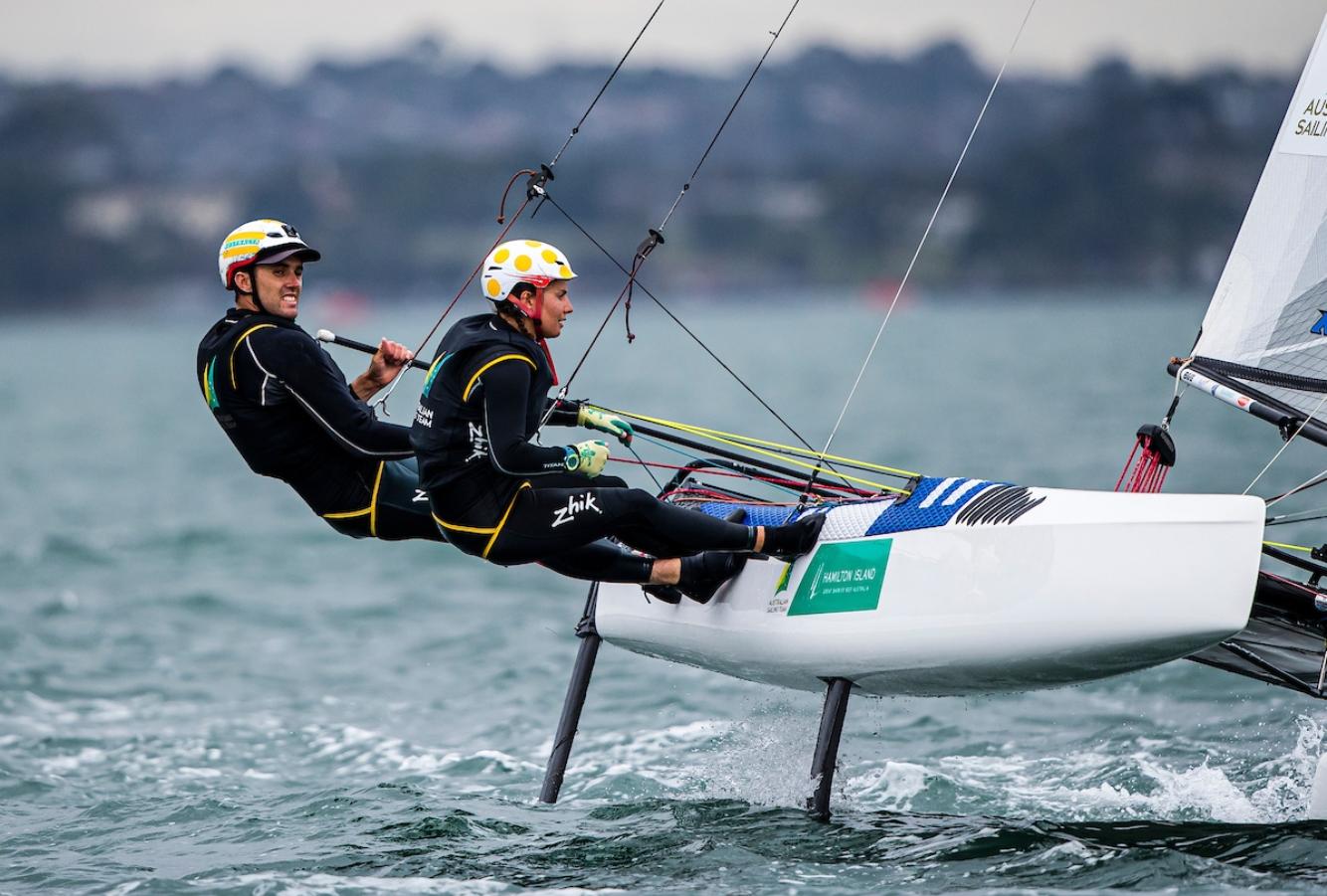 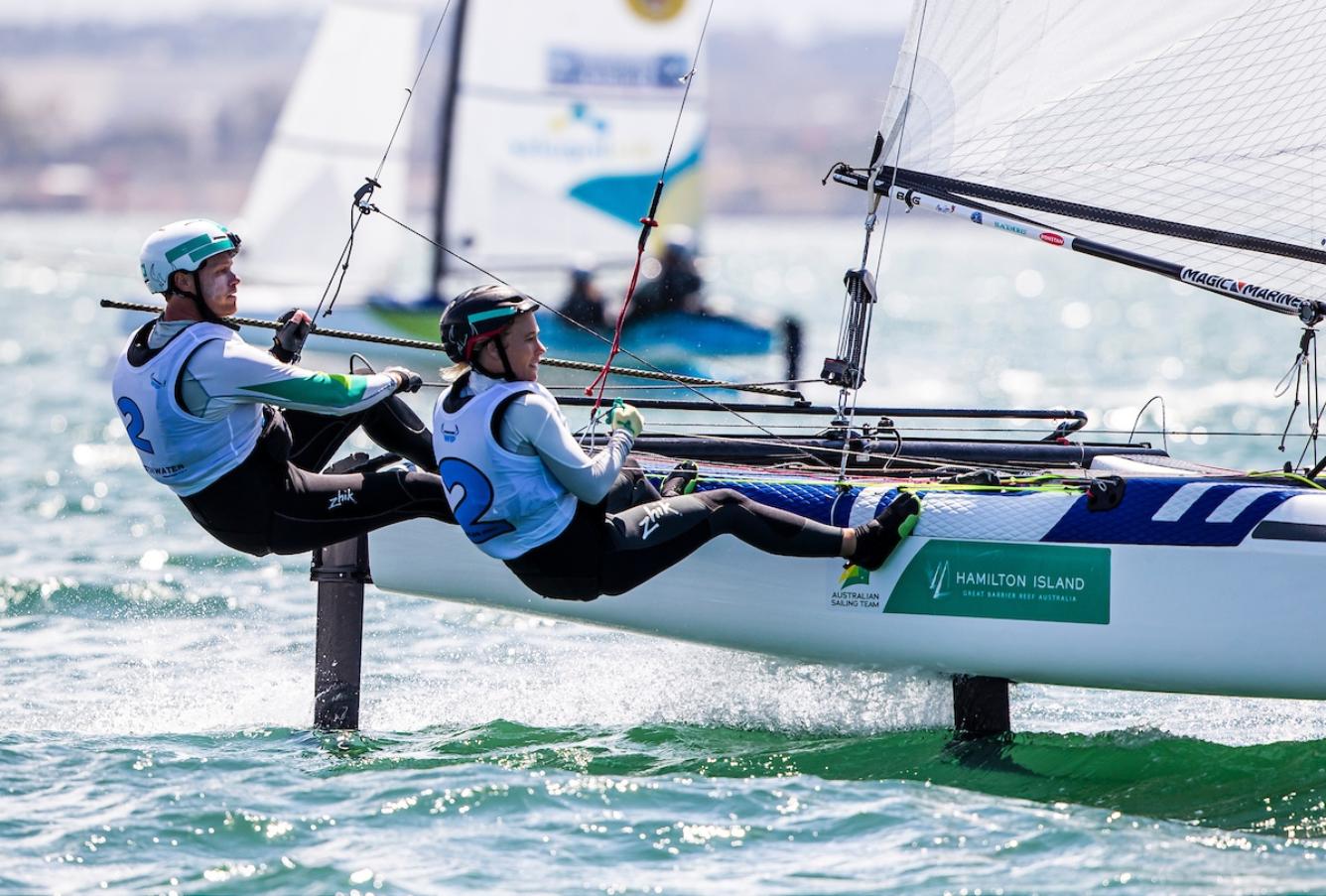 Peter Burling and Blair Tuke from New Zealand dazzled to win another 49er world championship, the sixth for the magic combo, which is easily a class record.

In thrilling medal race the Spanish 49erFX team of Tamara Echegoyen and Paula Barcelo and the British Nacra 17 team of John Gimson and Anna Burnet owned the 49erFX and Nacra 17 top spots respectively.

Three medal races on Corio Bay in cool SW 10-14 knots building to 18 knots by the afternoon capped off the 49er, 49erFX and Nacra 17 2020 World Championship, and added more data to the form guide for those nations yet to announce their representative teams for Tokyo 2020.

Medal prospects for Enoshima, the sailing venue for the Olympic Games July 24 to August 9, are a little clearer. Then there are the surprise top 10 absentees including Rio 2016 FX gold medallists Martine Grael and Kahena Kunze (BRA) and Rio Nacra 17 gold medal winners Santiago Lange and Cecilia Carranza (ARG). 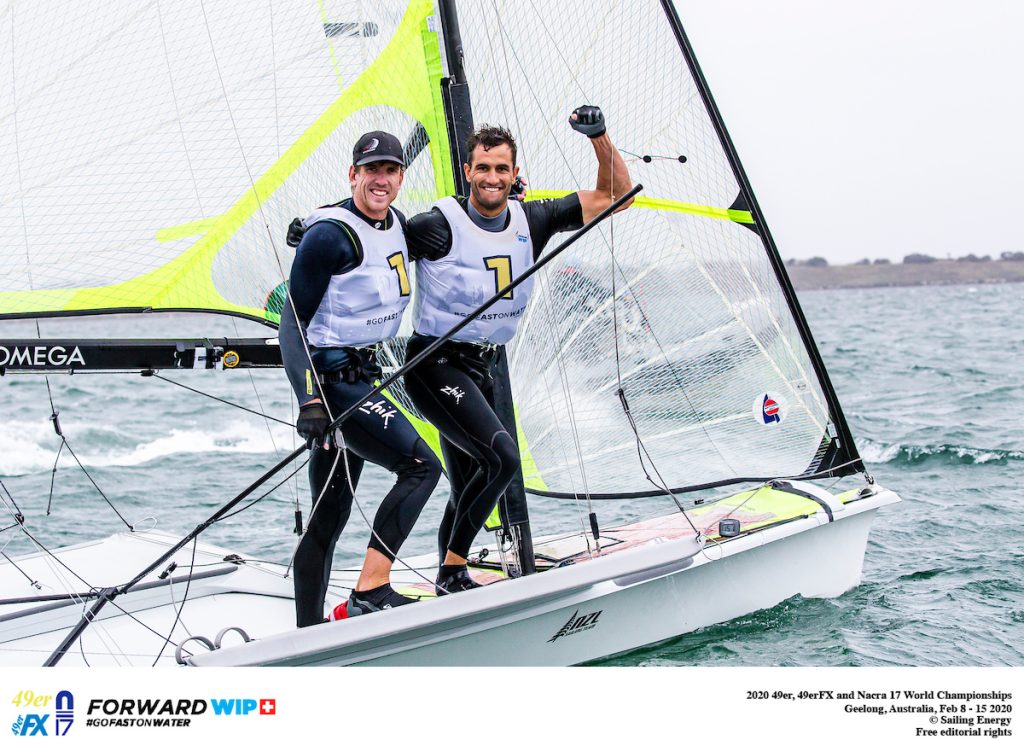 Second by 20 points was the Spanish pair of Diego Botin and Iago Lopez Marra and third by a margin of two points were the Germans, Erik Heil and Thomas Ploessel.

“We put together a couple of good ones this morning so we could be a bit more relaxed in that last one,” Burling said. “Being an Olympic year it’s a good one to win.”

Tuke had this to say: “We’ve really stepped up in some areas this week. We’ll enjoy this win as they don’t come that often.”

When asked how they will balance an Olympic and America’s Cup campaign for the second time, Blair commented: “We’ll just keep going as we’ve been going, and enjoying both. We’ve had more than a solid year of doing both campaigns; before Rio it was the same.”

Burling/Tuke began the medal race on port tack at the boat end and showed great speed, especially downwind. They remained strategically cautious, avoiding any risk to their commanding first.

Heil/Ploessel put together a strong start mid-line and were fast upwind. They went on to bullet in the medal race, giving them the bronze, while the Austrians Benjamin Bildstein and David Hussl were left reeling after a penalty call at the start. Bildstein/Hussl, who were first on the leaderboard prior to the final day of racing, couldn’t close the gap on the racetrack and missed out on top three by one point.

Echegoyen with Barcelo (ESP) and Dobson with Tidey (GBR) locked horns throughout the medal race. Each team was well clear of any competition and only had to beat the other to secure the gold medal.

“We are so so happy,” Echegoyen said on-water once the world championship result was clear. “You know this kind of course is shifting all the time, you have to think about what is the best plan. We tried just to be close to her (GBR); you have to be calm and keep going. If you do a split, you can lose control.

“Because of the Volvo Race, Paula and I started this campaign a little late; it’s a short time to try and get to the high level of this fleet. At the last worlds in Auckland we had to abandon [due to an injury to Paula]. Here we just tried to focus every day,” the beaming skipper added.

“Every moment it was so close and so stressful and finally we get the gold,” Barcelo said as the pair enjoyed some celebratory champagne, having beaten Dobson/Tidey.

On the second upwind beat of the medal race, the British team made significant gains on the Spanish before tacking underneath. Echegoyen, the 2012 match racing world champion, tacked immediately on their line and Dobson/Tidey reacted. The Brits were locked in and made gains, but the layline forced both to tack back with the Spanish directly ahead into the windward mark.

The British looked to have a slightly better hoist going but capsized when their kite filled with water halfway up. The Spanish sped away, only looking back moments later to realize the pressure valve had been released.

The eventual silver medallists will be replaying the capsize in their heads for some time. “Our first reaction is we are a little disappointed,” Dobson admitted. “We could have taken it to the Spanish a little better in the medal race, but on the whole we have sailed a really good regatta.”

Outside the match race for gold was an eight-team battle for the bronze medal. Almost all of the teams were in the hunt when drama hit at the leeward mark. Some teams over laid, others rode forward in a puff and all arrived at the leeward marks together. Chaos ensued, and Roble/Shea (USA) pounced with a smooth rounding, which they road into the lead.

Critically for the Americans, their countrywomen, Henken/Tobias (USA) suffered in the leeward gate pileup and went from a leading position to deep in the pack. 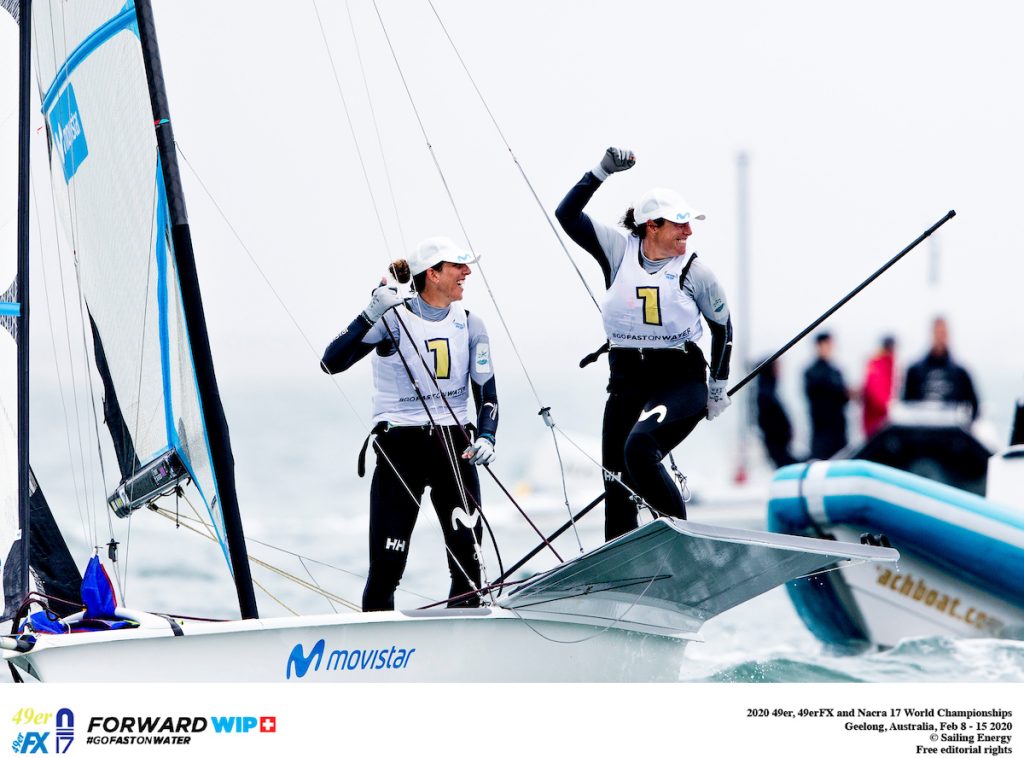 John Gimson and Anna Burnet (GBR) rebounded from their tiller extension breakage in the final of two morning races to put themselves into the gold medal position. The Brits led from the first work, taking advantage of the two Australian teams playing a cat and mouse overall game for country selection further back.

Gimson acknowledged back on the Royal Geelong Yacht Club hardstand, “We knew with the Australians trials still on, it definitely helped us. Our strategy was to get a clean start and stay on the lifted tack. Neither of us can believe it; after the week we’ve had we are unbelievably happy.”

“We just kept fighting this week,” Burnet added. “We knew from the forecast it was going to be building, it ended up being a bit breezier than we thought. It’s been amazing having Iain Percy here mentoring and helping. We’ve been away since November 1, we’ll now head back home to get boats ready for Europe, then it’s all on for Tokyo.”

With country selection to be announced, there was everything at stake for Australia’s two top 10 Nacra 17 teams, Nathan and Haylee Outteridge and Jason Waterhouse and Lisa Darmanin, who were first and second respectively in overall standings prior to the gold medal race. The Outteridges scooped the silver medal and Waterhouse/Darmanin the bronze, and though the order seems correct on paper, it was not the result the brother and sister due were after.

“We are happy to have a win today, and also go home with a medal,” Darmanin said. “We have really developed as a team in this quadrennial, and I am proud of how we are sailing. In a medal race like today, where there are so many things to think about and crews attacking you from everywhere, that is when the team comes together and really shines.” 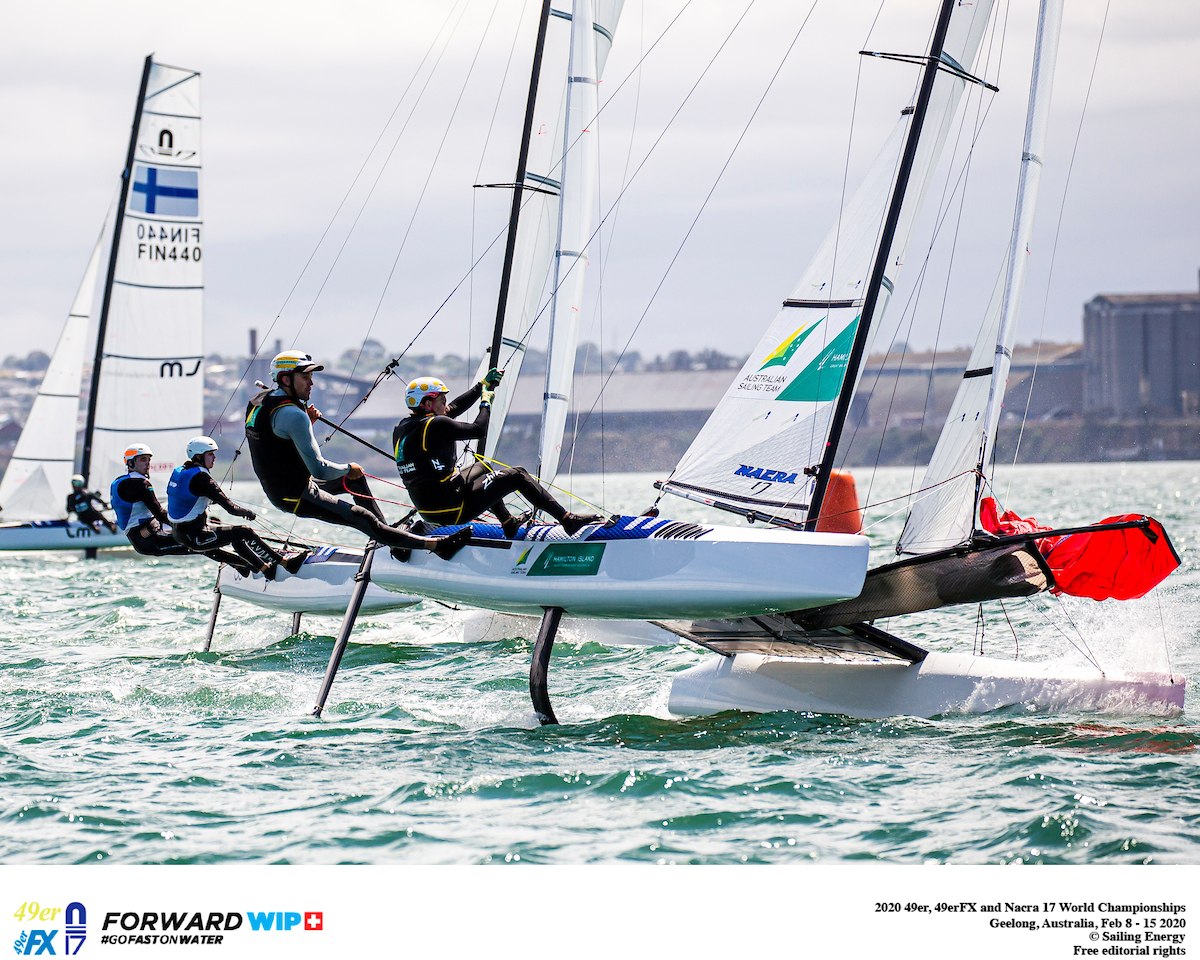 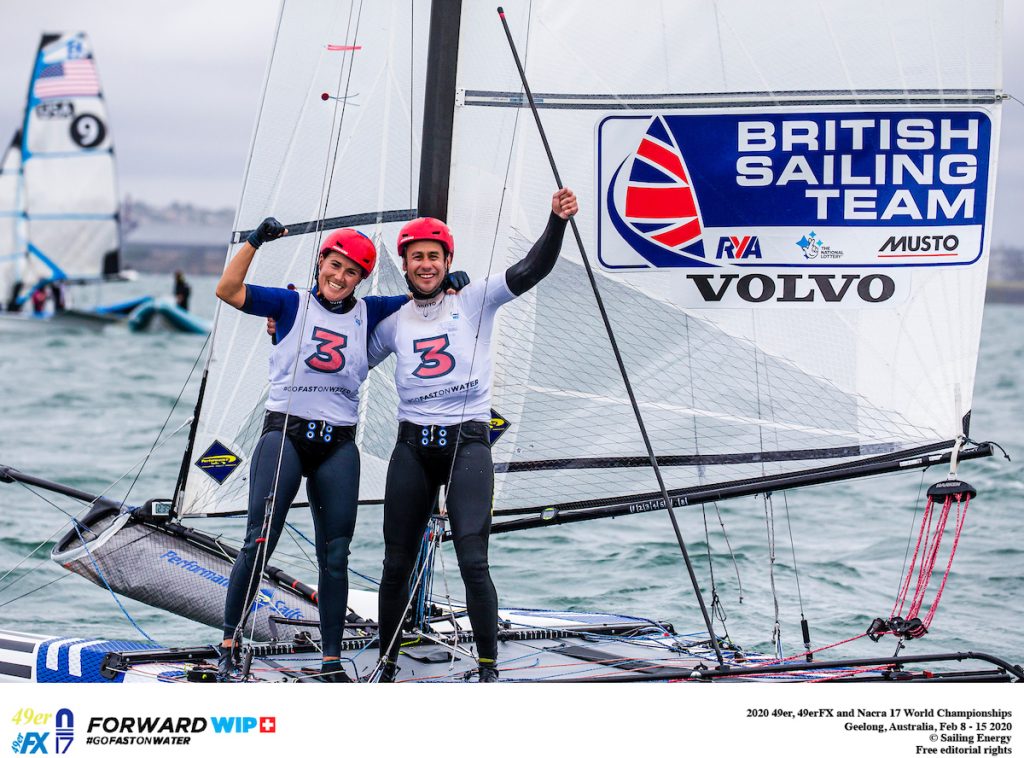 US Sailing publish their points system so as of today, Riley Gibbs and Anna Weiss wrapped up USA selection in the Nacra 17 and celebrations were noisy on the boat ramp for Stephanie Roble and Maggie Shea who pipped their USA countrymates with their medal race result. Both teams can now begin their preparations for Enoshima in earnest.

Australian selectors are expected to make an announcement on their Nacra team as early as next week, with Rio 2016 silver medallists Jason Waterhouse and Lisa Darmanin widely tipped for the pick. The Phillips brothers, Will who drives and Sam who crews, reached a benchmark in terms of internal selection for Tokyo 2020 with their sixth overall.