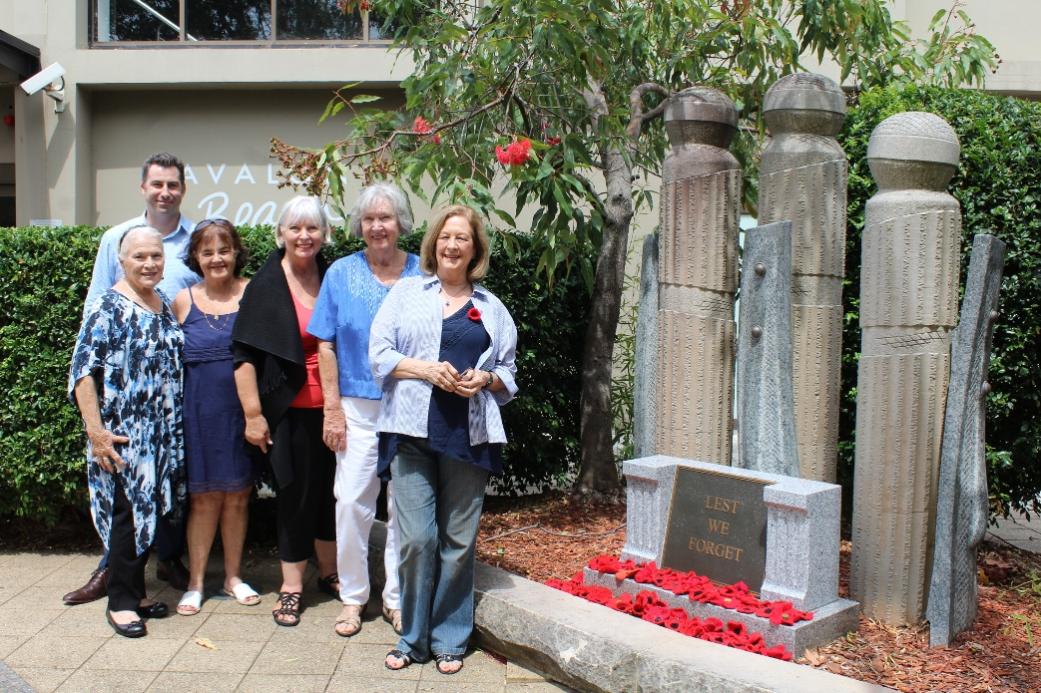 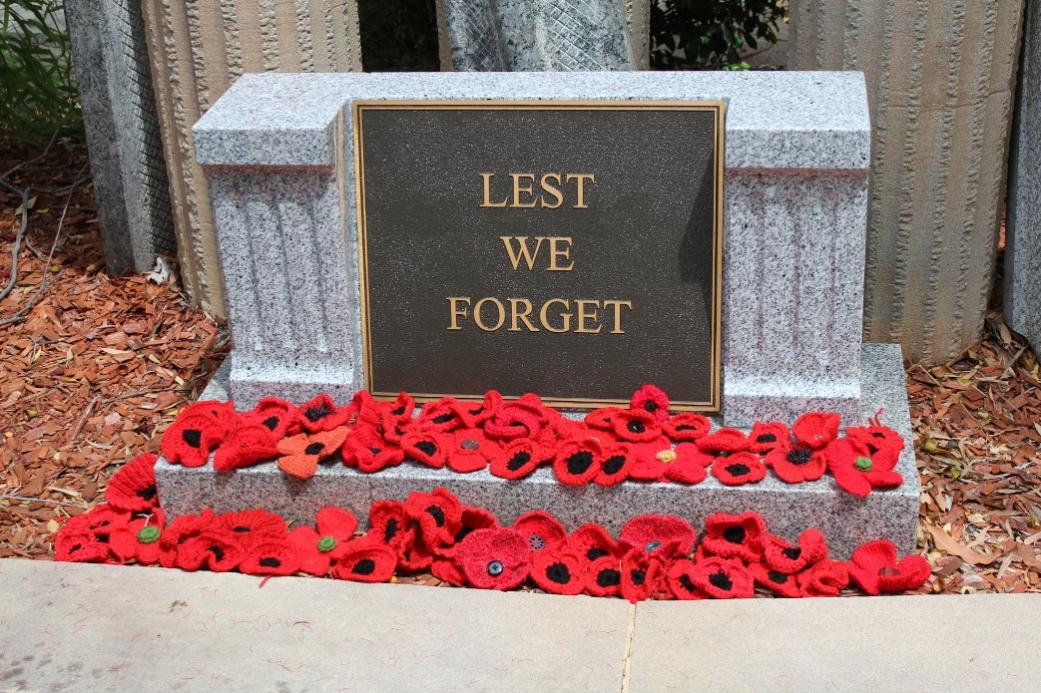 In 2018 Avalon Beach RSL is going to have a Poppy Wall.

Already 12 ladies are busy knitting and crocheting away. You can help by dropping made flowers into the Avalon Beach RSL Club or join the group in the club on Mondays at midday. Just look for Dannie Sloper!

Red Wool is also needed if you have some or see some when out and about, perhaps pop into a Red Cross shop near you and see if any has been put there.

For those of us who can’t crochet or knit (sigh), on Wednesdays at 2pm, at the same RSL, people can also participate in making cloth red flowers with Tamara Sloper Harding, which is a Craft, and makes something lovely too. This will probably suit those who don’t have a problem cutting material and sewing better, plus you get to spend time with a lovely lady!

If you can’t do this either as you will cut it wrong or stab yourself with a pin or sew the petals to the tablecloth by accident (longer sigh), perhaps keep your eyes peeled for the red polyester material others may be able to do something with and drop this in to the RSL.

Angus Rimmer, General Manager at Avalon Beach RSL stated this week he and the club are 100% behind the initiative. Members and visitors are looking forward to the club having a Poppy Wall for Anzac Day this year, Wednesday April 25th, and having an even larger display incorporated into the garden-courtyard area by Remembrance Day 2018, November 11th, which will also mark one hundred years since the cessation of the hostilities known as World War I – The Centenary of Armistice.

This year, of all years, let us honour those who have served us by turning the green areas leading into Avalon Beach RSL into a blaze of masses of red handmade poppies; these are the threads, woven with thoughtfulness, that may bring a smile to those who serve us still. 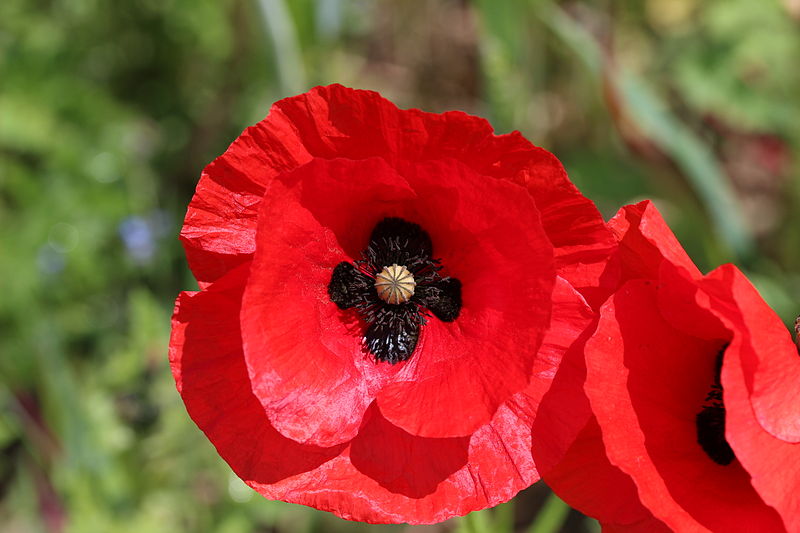 The flower of the common or field poppy Papaver rhoeas, on which the remembrance poppy is based.  Courtesy Bjorn S...

The remembrance poppy was inspired by the World War I poem "In Flanders Fields". Its opening lines refer to the many poppies that were the first flowers to grow in the churned-up earth of soldiers' graves in Flanders, a region of Belgium. It is written from the point of view of the dead soldiers and, in the last verse, they call on the living to continue the conflict.

The poem was written by Canadian physician, Lieutenant Colonel John McCrae, on 3 May 1915 after witnessing the death of his friend, a fellow soldier, Alexis Helmer, who was killed during the battle on May 2. .

McCrae fought in the Second Battle of Ypres in the Flanders region of Belgium, where the German army launched one of the first chemical attacks in the history of war. They attacked French positions north of the Canadians with chlorine gas on April 22, 1915 but were unable to break through the Canadian line, which held for over two weeks. In a letter written to his mother, McCrae described the battle as a "nightmare";

For seventeen days and seventeen nights none of us have had our clothes off, nor our boots even, except occasionally. In all that time while I was awake, gunfire and rifle fire never ceased for sixty seconds.... And behind it all was the constant background of the sights of the dead, the wounded, the maimed, and a terrible anxiety lest the line should give way. — McCrae

McCrae performed the burial service himself for his friend, at which time he noted how poppies quickly grew around the graves of those who died at Ypres. The next day, he composed the poem while sitting in the back of an ambulance at an Advanced Dressing Station outside Ypres. This location is today known as the John McCrae Memorial Site.

The poem was first published on 8 December 1915 in the London-based magazine Punch. It's first appearance here was in a Tasmanian Newspaper:

IN FLANDERS FIELDS.
In Flanders' fields the poppies blow
Between the crosses, row on row,
That mark our place, and in the sky
The larks, still bravely singing, fly,
Scarce heard amid the guns below.
We are the Dead. Short days ago
We lived, felt dawn, saw sunset glow,
Loved, and were loved, now we lie
In Flanders' fields.
Take up our quarrel with the foe;
To you from failing hands we throw
The torch; be yours to hold it high.
If ye break faith with us who die
We shall not sleep, though poppies grow
In Flanders' fields.
—"Punch."
December 8, 1915.
IN FLANDERS FIELDS. (1916, February 5). Examiner (Launceston, Tas. : 1900 - 1954), p. 4 (DAILY). Retrieved from http://nla.gov.au/nla.news-article50857520

I met a man who had a couple of poppies in his buttonhole, gorgeous blooms, deep red and black, with beautiful shaped petals, says a writer in the London "Evening News."

On January 28, 1918, while still commanding No. 3 Canadian General Hospital (McGill) at Boulogne, McCrae died of pneumonia with "extensive pneumococcus meningitis". He was buried the following day in the Commonwealth War Graves Commission section of Wimereux Cemetery, just a couple of kilometres up the coast from Boulogne, with full military honours. His flag-draped coffin was borne on a gun carriage and the mourners – who included Sir Arthur Currie and many of McCrae's friends and staff – were preceded by McCrae's charger, "Bonfire", with McCrae's boots reversed in the stirrups. Bonfire was with McCrae from Valcartier, Quebec until his death and was much loved.

After several months of hard fighting on the Western Front, the Allies finally broke through the Hindenburg Line on 29 September 1918. The German army was beaten and within weeks came the Armistice.

The Armistice of Compiègne between the Allies and Germany came into effect at 11am on the 11 November 1918. The guns fell silent on the Western Front and after more than four years of unimaginable bloodshed and destruction, the war was finally over. At home in Australia, large crowds gathered in capital cities to celebrate the end of conflict.

The Armistice paved the way for the signing of a formal peace treaty, the Treaty of Versailles, and the end of the war six months later. On 28 June 1919, the treaty was signed in the Hall of Mirrors at the Palace of Versailles, with Australian Prime Minister William Morris (Billy) Hughes and Deputy Prime Minister Joseph Cook adding their signatures on Australia’s behalf.

After the Second World War, Armistice Day became Remembrance Day, a time to commemorate war dead from all conflicts, as well as their widows and children, and those who serve still. At Remembrance Day Services held at Avalon Beach RSL Cenotpah each year the Legeacy Widows are the guests of honour.

Some patterns for those who like to keep busy, even while watching a movie or the news of an evening:

For the best finish, knit with a Double Knit (DK yarn). The size of needle you choose will determine how big the poppy will be, but we recommend 3.5mm or 3.75mm (UK9). If you have different yarn left in your stash, just use that and the appropriate needle size. If you have any problems with any of the techniques in the poppy patterns - and you have access to the internet - you will find lots of tutorial videos on youtube.

Colour A Red (one ball will make a lot of poppies!). Colour B Scrap of Black or a black button

Thread tail through yarn needle and slip all the remaining live stitches onto the yarn tail and pull tight. Pull around into a circle and then mattress stitch (or use whatever stitching you normally use) to seam for an invisible seam. Sew in ends.

Colour A 1 ball red yarn (this will make a lot of poppies). Colour B Scrap of black yarn or black button

Using Col A Cast on 60 stitches. Row s1 –10 : K2, P2 across whole row(for a slightly smaller poppy do 8 rows of rib). Row 11 : Knit 2 stitches together across the row (30 stitches). Row 12 : Slip 1 stitch, Knit 2 stitches together then pass the slip stitch over... repeat across the whole row (10 stitches). Break off yarn with long tail and thread back through remaining stitches and pull tight. Join edges with mattress stitch

You will need some red wool and a black button.

1. Three petal crochet poppy with 4.5mm hook. Ch 3, join with slst to form circle. Ch 3, work 9 dc into the centre of the circle and join with slst.. Work the three petals separately.

Also please visit: By The Left Veterans Initiative: Younger And Female Veterans Have Served Too - Avalon Beach ANZAC Day March 2018; Sub-Branch encouraging all female Veterans to March With Us 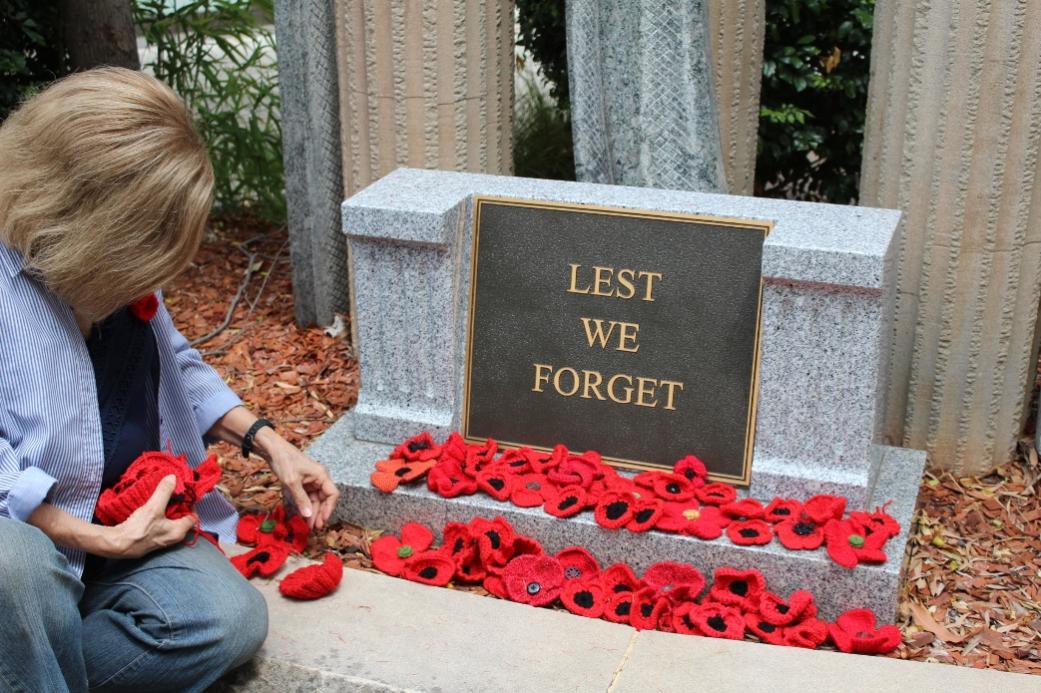 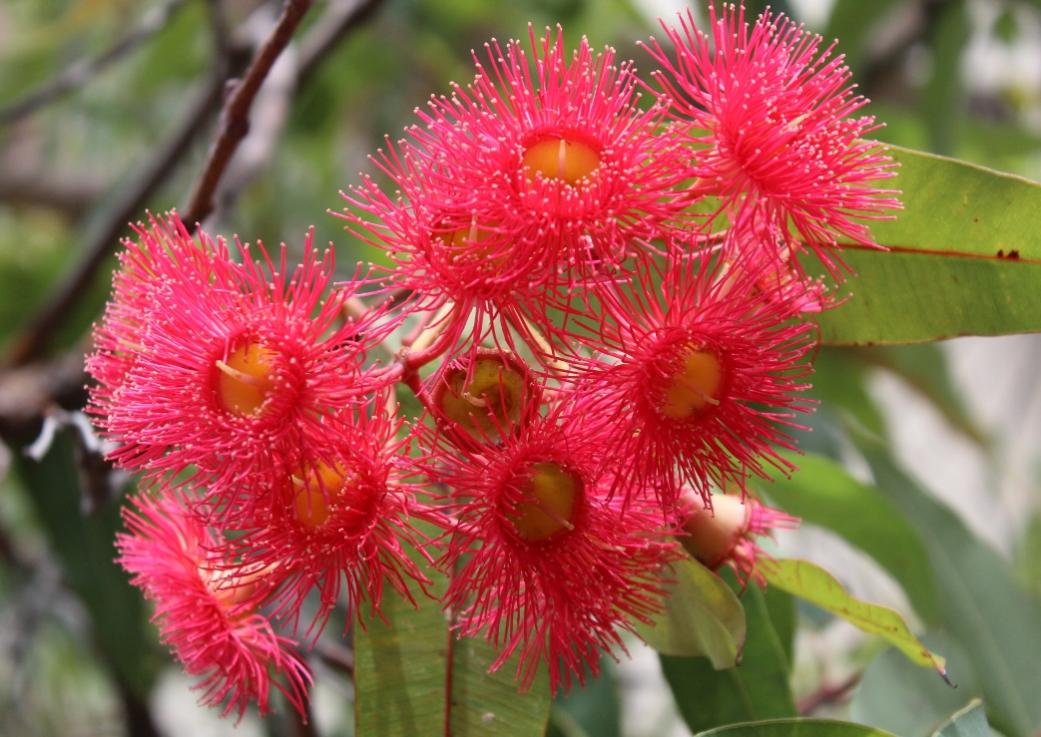 An Australian Red Flowering Gum (Eucalyptus ficifolia) was planted to shade the cenotaph at Avalon Beach RSL a few years ago.
Report and Pictures by A J  Guesdon, 2018.
Tweet