Water is the essence of life, a resource second in importance only to oxygen.
“Water is life, sanitation is dignity” - Roberto Lenton

We are so very lucky here in Australia. Even though we are currently in a drought we are able to leave a tap running or have a shower longer than we need and we don’t even realise how lucky we are. We have so much more clean water than people in Timor Leste.
Timor is an island, surrounded by water.  It sits on a coral triangle that is home to more species of marine life than anywhere else on earth. The clean, warm waters that surround the world’s newest country provide ideal conditions for a delicate coral reef ecosystem, supporting a vast diversity of creatures, from the smallest shrimp to the massive whale shark.

Timor-Leste’s north coast sits on the edge of an underwater precipice, the Wetar Strait, a marine trench almost three kilometres deep, which provides a corridor for sea animals: whales, dolphin, tuna and sailfish patrol offshore. The coastal coral reef is constantly refreshed by the deep water, which brings both predators and prey to within reach of its inhabitants. The local people catch fish for food with nets. When I was there I saw some men use explosives to shock the fish which they then scooped out of the water.

In 2010, according to Timor-Leste’s National Statistics Directorate, almost 40 percent of the country’s 1.1 million inhabitants lacked access to an improved water source.  The problem is most evident in rural areas where approximately 75 percent of the population lives - 44.4 percent do not have access against about 15 percent in urban areas. In the eastern districts of Baucau, Lautem and Viqueque, and Oecussi District, an enclave inside Indonesia, that figure tops more than 50 percent.

In Soibada there are no significant dams and only two perennial rivers. The rivers are steep and none are suitable for transport. Construction of small earth bank dams assists water storage, but for the most part people rely on underground water from wells for drinking. Any water available for irrigating crops is reserved for rice fields. Some of the photos here show how the women at a local orphanage wash the dishes and prepare meals. The children have to walk for around half an hour each way to fill buckets from a stream to do the cooking and washing.

There is high rainfall in the wet season (our summer), and abundant natural springs all over the island. Despite all this rain and the springs the people there have only a fraction of the water that we have to use each day.

East Timor is the poorest nation in Asia, and one of the poorest in the world. Access to safe water and hygienic sanitation is a significant problem. Nearly two thirds of the population live in rural areas where there is either no or very limited access to safe drinking water.

Before 1999, less than half of the population of East Timor had access to safe water, and according to the UN, most of the water systems were focused on urban areas.

Water-born diseases are rife. Children are often sick. Water related diseases, such as diarrhoea, malaria, and dengue fever represent some of the most common childhood illnesses in East Timor and are significant contributing factors towards the high infant mortality rate of 126 per 1000 live births.  Access to safe water and proper sanitation will help prevent these water-born diseases. The people of Timor need a water and waste system that works throughout the country.

In addition, there is limited access to education which means there is little hygiene knowledge within the community. Many people don't understand about germs, or the benefits of washing hands and other basic hygiene practices.  For example; a person further up a stream may use it for washing himself or his clothes then it flows downstream and someone else drinks it or cooks with it.

This subsequently has a large impact on the lives of people, particularly children.

Independence and the contamination of water supplies
When an overwhelming majority of East Timorese voted for independence from Indonesia in 1999, it led to violent opposition. Militia opposing East Timor independence killed pro-independence supporters and threw bodies in the water wells.  Thus, they contaminated the country’s supply of clean drinking water.

Much of East Timor’s infrastructure was destroyed following the independence ballot of 1999. This included water supply infrastructure. Exacerbating this situation was the already degraded state of rural water supply systems due to inadequate design, poor construction and low quality materials.

In September 1999 I was part of the Australian-led peacekeeping troops that were deployed to Timor Leste. The lack of clean water was a problem for the Australian troops too. We bought in bottled water from Australia and made fresh water from sea water in the Australian ships that were at anchor in Dili (the capital of Timor) harbour. It was stored in huge rubber bladders and we would fill up gerry cans each day so that we could wash ourselves and our clothes. The only time there was enough water to wash our hair was when it rained. It was so wet during the rainy season that our clothes and hair never really dried. This had health consequences in itself (My hair went mouldy and rotted and fell off). People used bottles of water to trade with. It was a very precious commodity. Local Timorese would chase our vehicles asking for water and food.

International aid agencies are assisting the Timorese by building systems to bring the water to the people. The water sources are natural mountain springs and water is piped down the mountains and through the valleys to taps which are close to the villagers homes. This means that people will have year round access to clean water close at hand for their daily needs.  For the poor, the public taps are usually the only source of clean water, fulfilling a basic need.

One of the first tasks to build the system is the cleaning of the source. The springs are often filled with mud and rocks which reduces the quantity of water produced and also affects the quality. An open water source also means that it can be easily contaminated. The first task of the volunteers is to clean and build a cover for the water source.
Water is piped up to 10 km from the source, passing through gullies and along valleys. The pipes are anchored into the ground with a small concrete pillar every 30 metres or so.

Clean water supply has also helped people resume gainful employment. Water is critical for small business. Aid groups are restoring the water supply to schools, hospitals, and business ventures, as well as to homes and poor communities.  One lady I know has opened a restaurant. It is a simple place with long wooden tables and benches, but the food is tasty and clean. Running water helps her maintain a good standard of hygiene.

The Australian Government through its proposed new phase of the rural water, sanitation and hygiene sector (RWASH) in Timor-Leste for 2012-2017 has stated the approximate budget allocation to this program of work is $60 million over five years. This new phase will build on Australia’s existing program, Be Saneamentu no Ijene Komunidade (BESIK). BESIK is a five-year, $41 million project implemented by a managing contractor which provides technical assistance to the Government of Timor-Leste (GoTL) and subcontracts NGOs to deliver water and sanitation services to communities.

In 2012 Pittwater Friends of Soibada was approached by Rob Romer of TankPro. He will be part of the team of Volunteers that will visit Soibada in July 2013. What Rob hopes to achieve whilst in Soibada is to give the community access to clean, safe, sterile water. At present there is no clean, running or stored water and any water that is collected is diseased. The setting up a Rainwater / Water Collection Tank, at the school and installing TankPro to sterilise this water is also on Rob’s ‘to do’ list. The water will be used for Drinking, Washing Food and Vegetables, Cooking, washing hands (after toilet use).

Clean, sterile water will help eliminate waterborne diseases, bacteria and viruses and help to improve the health of the people, which suffer from vomiting and diarrhoea and sometimes death from drinking contaminated water.

Another project whilst there will be at a Medical Centre where there is already a water tank installed. At present, the water is in very poor condition, containing waterborne diseases and laden with mosquito larvae. This will not only sterilise the water but also eliminate the mosquito larvae (which are Malaria Hazard). 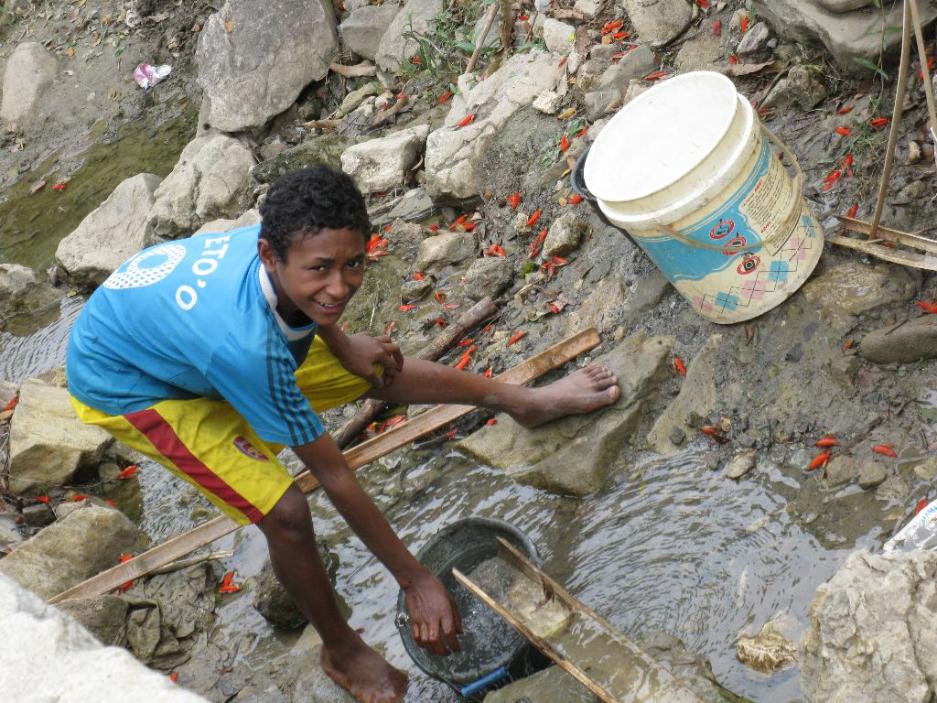