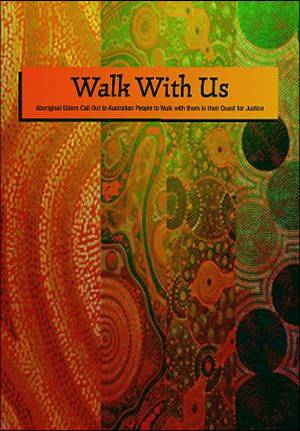 Walk With Us is the long awaited sequel to last year’s highly regarded and recommended This Is What We Said. Since its publication in August 2011, Walk With Us has been launched in various cities around Australia like Melbourne, Sydney, Canberra and Perth.

In Sydney it was launched in Glebe on Thursday, 1 September 2011 by Nicole Watson, Research Fellow, Jumbunna Indigenous House of Learning and Jeff McMullen, CEO (Honorary) of Ian Thorpe's Fountain for Youth. Auntie Millie Ingram did the Welcome to Country. The Sydney launch was highly successful with about 120 people packing out the top floor of the book store gleebooks. In the audience were among others notable people like Paul Coe, Eva Cox, Lola Forrester, Graeme Mundine and Don Palmer. Sky News was recording the launch as well. The three brilliant speakers were very informative, emotional and motivating. The evening was highly inspiring with speeches that went straight to the heart. The comments of the NT Elders featured in Walk With Us were echoed in their excellent speeches.

Aunty Millie gave a powerful Welcome to Country and stated that the words of the people from the Northern Territory included in Walk With Us are heartbreaking. She concluded with an appeal to help our brothers and sisters in the Northern Territory, encouraging us to speak out and tell our fellow people.

Ms Nicole Watson said that “at a community level, the Intervention has enabled the Commonwealth to seize control of Aboriginal lands not only the most valuable asset of many communities, but the lynchpin of identity and culture. The imposition of government business managers has usurped community initiative and contributed to a sense of powerlessness.” Towards the end of her speech she remarked “We need to spread the word that these measures are inhumane and they do more harm than good. We also need to spread the word that each one of us is diminished while these measures remain in place. Aboriginal people in the Northern Territory deserve better. All Australians deserve better than measures that degrade and dehumanise the most marginalised people in our society. And we must tell our fellow Australians this.”  She concluded by reading out the highly moving Elders Statement of 7 February 2011 included in Walk With Us.

Mr McMullen began by saying that the Welcome to Country by Aunty Millie and the Elders Statement read by Ms Watson “goes to the heart of the issue, that we walk in an Aboriginal land, and the fight for Aboriginal lands and the future of the homelands is the great moral challenge facing all of us and facing this country.” He motivated the audience to raise their voice about the ongoing injustices occurring through the NT Intervention, there is something we all could do. Emphasising that it is important for people to know that there will be no future funding for homelands when the Federal government’s funding next year ends, he pointed out that Paul Henderson’s recent offer to stop using the word “Intervention” would not change the discrimination as the policy itself remains intact. Then he conveyed a heartfelt message from Rosalie Kunoth-Monks, whose quotes are also featured in the book, that she wanted the audience to know that the voices in this book are true and this is what is happening and they want others to walk with them.

Mr McMullen reminded us that Brian Manning had said that “don’t forget the reason that really the Wave Hill Walk Off succeeded in winning back that land was unity”. He also praised Amnesty International’s new strong campaign, the homelands campaign, pointing out its report The Land Holds Us would be an excellent accompanying piece to Walk With Us. Towards the end he invited audience members to get copies of the book to give to others who don’t know about the issues.  He finished by saying that Walk With Us “says it all, this is a book that you can read, you will learn a lot more from it, that it is a book that is so powerful, …give it to someone that also has some power, give this book to someone who will take action, who will lend a hand and actually walk with these Aboriginal people”.

The evening concluded with a highly stimulating Q&A session with very active audience participation and statements by Lola Forrester and Eva Cox among others.

In the article Resetting our relationship with Aboriginal people of 29 August 2011 Michelle Fahy writes “in the divisive environment of the Intervention, true partnership seems further away than ever. Why is this so hard? Given the amount of debate on Indigenous issues, the absence of the voices of the people concerned is telling. So the launch this week of a new book by the group 'concerned Australians' is cause for celebration.”

A compilation from the evening as well as the complete speeches can be found at http://stoptheintervention.org/facts/films-and-literature/book-walk-with-us/videos-wwu

For further information about “Walk With Us”, please see www.concernedaustralians.com.au