Australian Dolphins Employ Sponges to Go Fishing - It's All in the Blood! 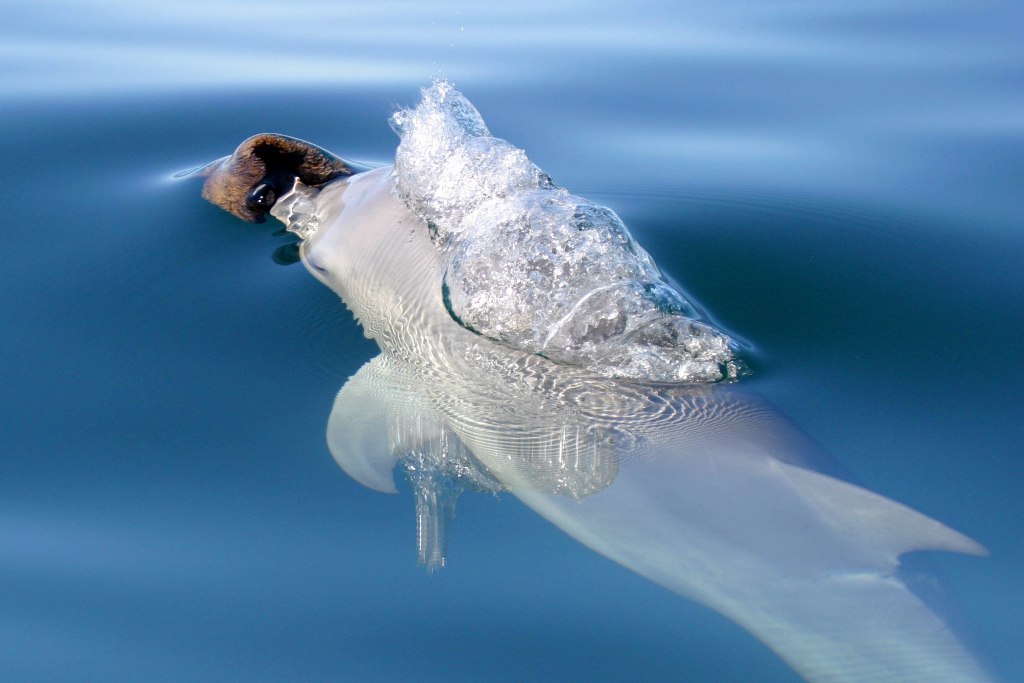 Some bottlenose dolphins in Shark Bay in Western Australia put sponges on their rostrums to use as tools to forage. A study of the dolphins has shown social behavior can shape the genetic makeup of this wild animal population. Credit: Simon Allen .

A UNSW-led team of researchers studying bottlenose dolphins that use sponges as tools has shown that social behaviour can shape the genetic makeup of an animal population in the wild.

Some of the dolphins in Shark Bay in Western Australia put conical marine sponges on their rostrums (beaks) when they forage on the sea floor – a non-genetic skill that calves apparently learn from their mother.

Lead author, Dr Anna Kopps, says sponging dolphins end up with some genetic similarities because the calves also inherit DNA from their mothers. As well, it is likely that sponging dolphins are descendants of a “sponging Eve”, a female dolphin that first developed the innovation.

“Our research shows that social learning should be considered as a possible factor that shapes the genetic structure of a wild animal population,” says Dr Kopps.

“It is one of the first studies to show this effect – which is called cultural hitchhiking – in animals other than people.”

The study is published in the journal Proceedings of the Royal Society B.

Dr Kopps and her colleagues identified individual dolphins in western Shark Bay about 850 kilometres north of Perth. They observed them from a boat as they foraged for food, travelled around the bay, rested, and played with other dolphins.

Genetic samples were also taken, and analysed for mitochondrial DNA type, which is only inherited from the mother.

It was found that the dolphins that lived in shallow waters, where sponges do not grow, mainly fell into a genetic group called Haplotype H.

The dolphins living in deep waters, where sponges do grow, were predominantly Haplotype E or Haplotype F.

“This striking geographic distribution of a genetic sequence cannot be explained by chance,” says Dr Kopps, who carried out the research while at UNSW and is now at the University of Groningen.

As well, the DNA results from 22 dolphins that both lived in deep water and used sponges as tools showed they were all Haplotype E.

“For humans we have known for a long time that culture is an important factor in shaping our genetics. Now we have shown for the first time that a socially transmitted behaviour like tool use can also lead to different genetic characteristics within a single animal population, depending on which habitat they live in” she says.

The team includes UNSW’s Professor Bill Sherwin and researchers from the University of Zurich and Murdoch University.

Researchers first spotted dolphins putting sponges over their rostra in Shark Bay in 1984: 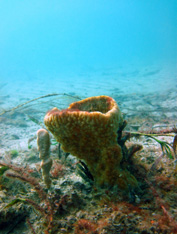 Dolphins are well known for their exquisite echolocation abilities, which enable them to detect and discriminate prey species and even locate buried prey. While these skills are widely used during foraging, some dolphins use tools to locate and extract prey. In the only known case of tool use in free-ranging cetaceans, a subset of bottlenose dolphins (Tursiops sp.) in Shark Bay, Western Australia habitually employs marine basket sponge tools to locate and ferret prey from the seafloor. While it is clear that sponges protect dolphins' rostra while searching for prey, it is still not known why dolphins probe the substrate at all instead of merely echolocating for buried prey as documented at other sites. By ‘sponge foraging’ ourselves, we show that these dolphins target prey that both lack swimbladders and burrow in a rubble-littered substrate. Delphinid echolocation and vision are critical for hunting but less effective on such prey. Consequently, if dolphins are to access this burrowing, swimbladderless prey, they must probe the seafloor and in turn benefit from using protective sponges. We suggest that these tools have allowed sponge foraging dolphins to exploit an empty niche inaccessible to their non-tool-using counterparts. Our study identifies the underlying ecological basis of dolphin tool use and strengthens our understanding of the conditions that favor tool use and innovation in the wild. 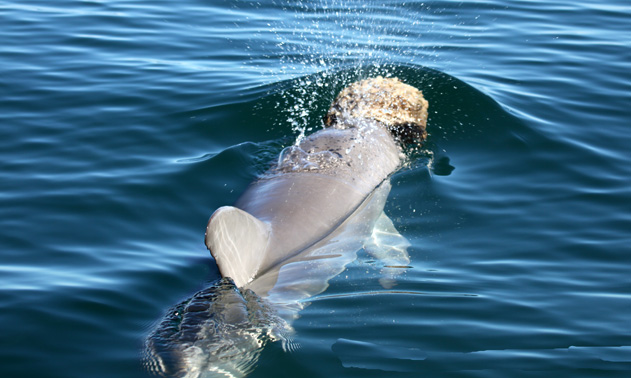 Sponge face. Some dolphins in Shark Bay use marine sponges as a fishing tool.

In 1984, researchers spotted dolphins doing something unusual in Shark Bay, Western Australia. When the animals got hungry, they ripped a marine basket sponge from the sea floor and fitted it over their beaks like a person would fit a glove over a hand. The scientists suspected that as the dolphins foraged for fish, the sponges protected their beaks, or rostra, from the rocks and broken chunks of coral that litter the sea floor, making this behavior the first example of tool use in this species.

But why do dolphins go to all of this trouble when they could simply snag a fish from the open sea?

The answer, researchers hypothesize and report online in PLoS ONE, is that the bottom-dwelling fish are a lot more nutritious. Some species also don't have swim bladders, gas chambers that help other fish control their buoyancy as they travel up and down the water column. In the Bahamas, where dolphins are also known to forage for bottom-dwelling fish, dolphins hunt partly by echolocating these bladders, which give off a strong acoustic signal. That helps the cetaceans find prey even when it's buried in sea sand.

But WA dolphins use sponges as tools to find food they cannot easily detect through echolocation, according to a new study published by Georgetown researchers in the July 20 issue of the online journal PLoS ONE.

Georgetown’s Eric Patterson (G’12), a Ph.D. in biology candidate, and longtime dolphin researcher and professor Janet Mann published the study 26 years after the discovery that dolphins use tools to forage for prey. The study was funded by the National Science Foundation, the National Geographic Society and Georgetown University.

“Tool-use has long fascinated us, especially since we are the quintessential tool-users and it was once believed to be a hallmark of humankind,” Patterson explains. “But some primates, elephants, birds and other species also use tools, and studying why and how they do so provides insight into the context in which tool-use arises.”

Most wild animals that use tools do so to extract food from difficult to reach places and Shark Bay bottlenose dolphins in Western Australia are no exception.

“These dolphins rip up marine basket sponges that grow along the seafloor and then wear them for protection when scouring the rough substrate for prey,” says Mann.

A staple for the sponging dolphins is the barred sandperch, but the mammals cannot detect it through echolocation because the fish lacks a gas-filled organ called a swimbladder.

Most fish have swimbladders, which helps control their buoyancy. Bottlenose dolphins are able to detect the gas chamber through echolocation.

By using the marine sponges to uncover the sandperch, Patterson and Mann show that the dolphins use the sponge tool to easily access the fish without injuring their beaks on the rough seafloor below.

“Sponging dolphins seem to specialize in hunting these swimbladderless prey when compared to the rest of the Shark Bay population,” says Mann, who has been studying the bottlenose dolphins there since 1988.

Patterson says the researchers believe the small size of the prey explains why “spongers are the workaholics of the bay – they have to hunt often in order for this small-yet-reliable meal to be enough, but it seems to work for them since they are able to pass the method down for generations.”

Nearly all of the female Shark Bay dolphins that live in channels that are 7 to 12 meters deep specialize in sponging.

“These clever dolphins have figured out a way to exploit fish that other dolphins cannot,” Mann says. “This highlights the dolphins’ innovative and problem-solving ability, which has been well-demonstrated in captivity, but less so in the wild.”

Mann also notes that her research team’s previous work has demonstrated that dolphin mothers pass the sponging method down to their daughters and some of their sons. So far, the team has documented three generations of spongers.

“This tradition is highly specific to the micro-habitat spongers live in, demonstrating the importance of ecology in the evolution of tool-use and culture,” she says. 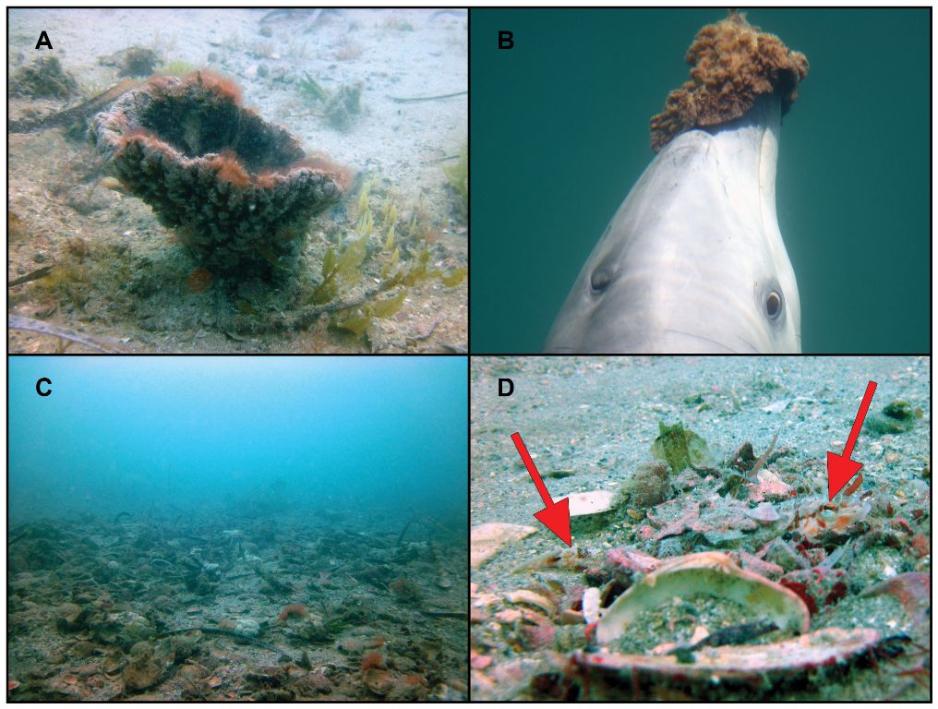 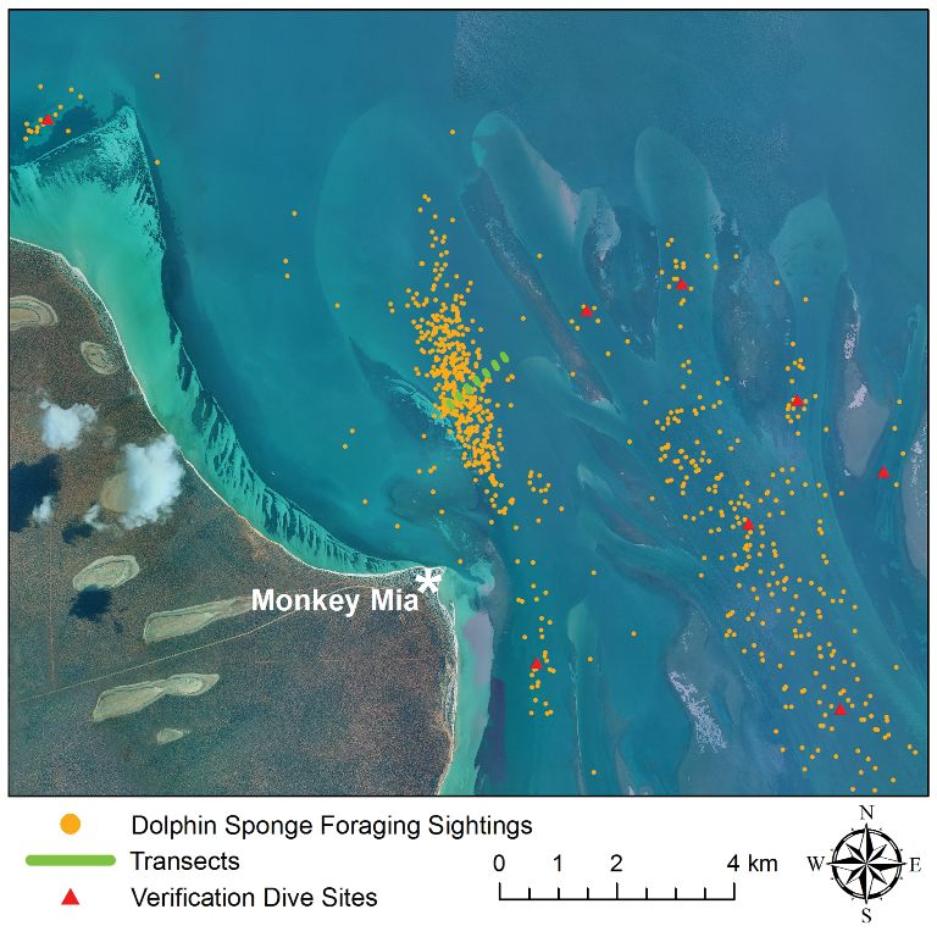