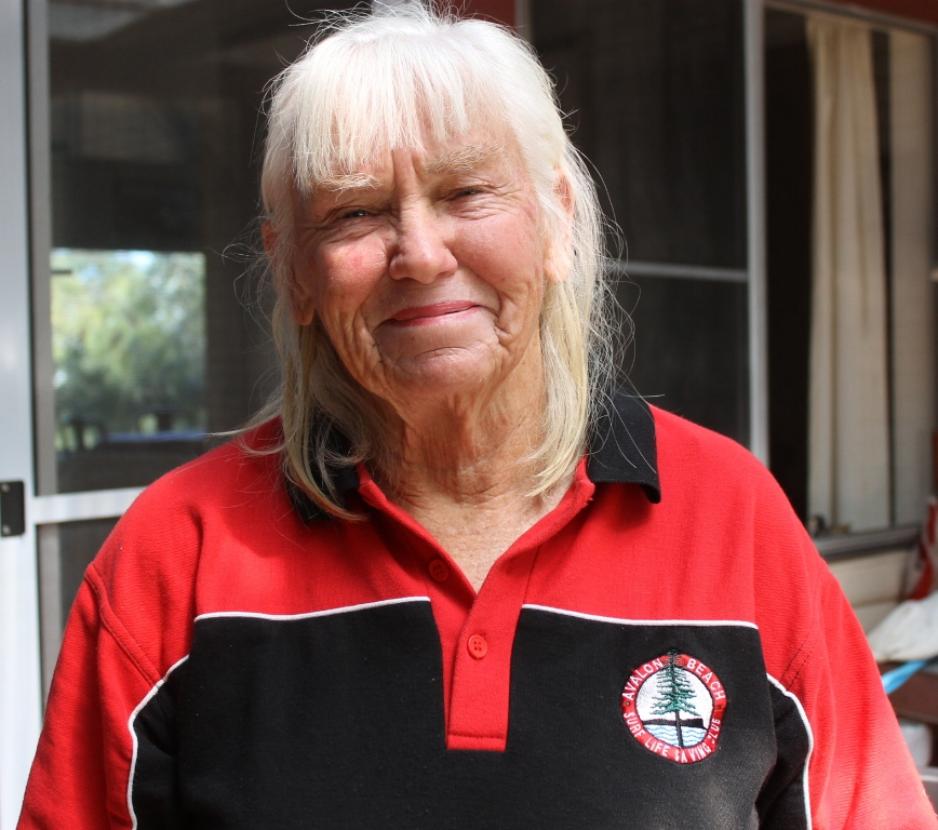 Paddling in the Lion Island Challenge this year was a lady who also plays golf, squash and bridge – has won to many medals to list! –   taught seniors too as part of Dee Why's  Tibetan Community Swim Program – has swum against Dawn Fraser; ‘Didn’t beat her of course – but came close’ – in masters swimming events and taught thousands, literally, to save other's lives and their own in and out of the water. Still a volunteer at Avalon Beach SLSC and still doing Patrols on the beach in her 70's, Virginia has been saving lives since she was 17.

Did you grow up there?

I grew up in Canada in the industrial town of Sarnia. When I was 22 I met an Australian and we got married in Sarnia.

Shortly afterwards I lost my dear sister Stephanie, she was in a car accident, in a car hit by a drunken driver, and only 21 - we had a few family tragedies. 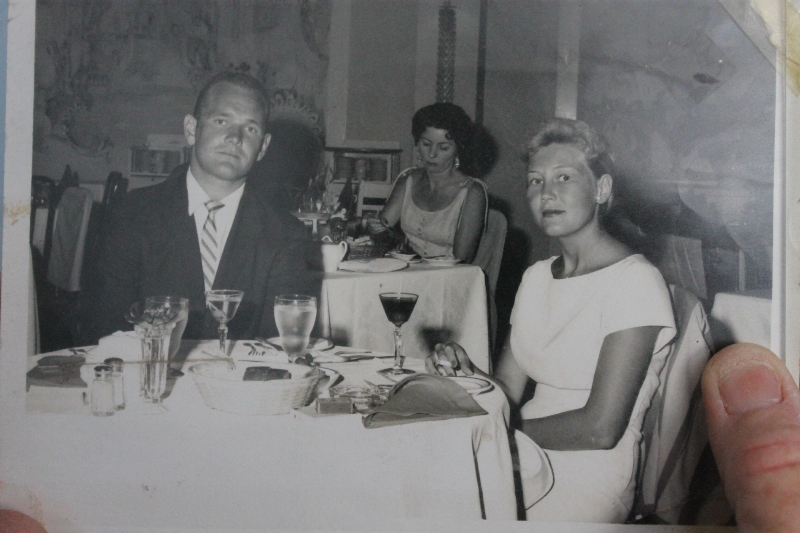 Stephanie having dinner with Neil Armstrong

We had our first daughter and at Christmas 1966 we travelled to Adelaide for me to meet my in-laws and show them their granddaughter for the first time. I loved the beaches and the life-style here but we returned to Canada. A year later my husband, Malcolm, was offered a transfer to Australia to be involved with the first manufacturing operation of Dow Chemical in Australia. I was happy to do this and start a new life here.

There are a lot of similarities between Canadian and Australian people – did you feel quite at home here?

Very much so. I think that Canadians and Australians have more in common than either one has with the USA for example. I wish Canada wasn’t so far away.

We lived in Sydney for two months and then moved to Melbourne which was the manufacturing site for Dow. Our second daughter was born in Melbourne. In 1972 we moved to Dow Australia headquarters in Sydney and bought our house in Avalon. In 1976 we transferred to Dow’s Pacific Area headquarters in Hong Kong. We were there for 5 years and then transferred to Auckland, New Zealand and then back to Sydney in 1985. Another transfer took us to the Gold Coast. Malcolm retired in 1996 and we stayed in Queensland until returning to Sydney in 2005. We kept our house in Avalon and have now had it for 42 years.

Our daughters started school at Avalon Primary and continued through to high school in Hong Kong and New Zealand. When we left NZ one of our daughters stayed there and got married there. She now lives in Melbourne and our second daughter now lives on the Gold Coast.

Which was your favourite out of all the overseas postings?

I loved all the places – the scenery in NZ is so varied and changes so quickly as you travel through both the North and South Islands. Hong Kong is a fascinating place and we enjoyed the Chinese food and culture. I worked at the American school teaching swimming. I got my first qualification in swimming from Royal Life Saving in Canada and taught my first Bronze Medallion class when I was only 17, taught swimming in Melbourne, here I teach swimming; I’ve been involved in swimming right the way along.

What is the difference between Royal Life Saving and Surf Life Saving?

In NZ I worked with under 5’s and teaching mums how to resuscitate babies. 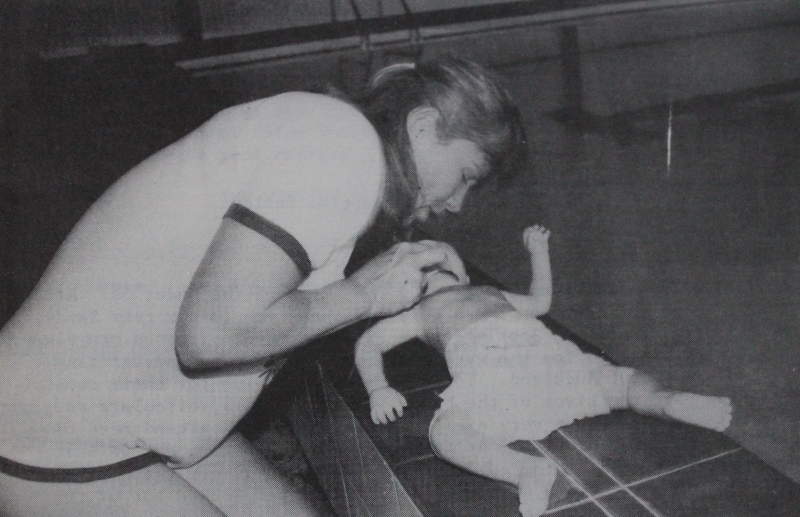 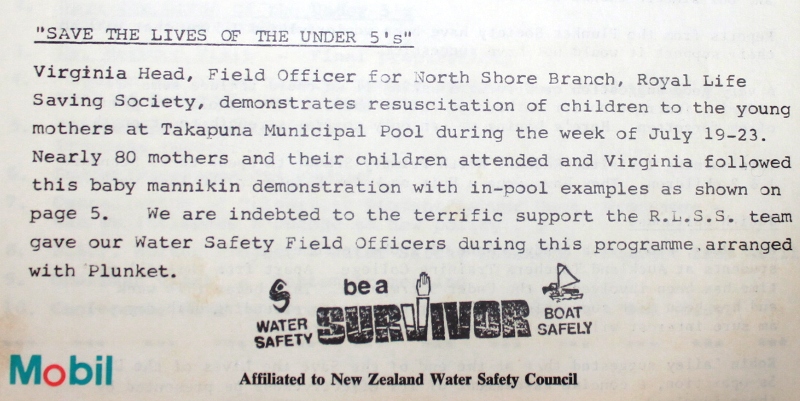 How did you get involved in that?

We started the Masters swimming group in Takapuna, NZ, and they needed qualified RLS as officials.

I had kept up my credentials from Canada so I volunteered. We started probably the first ocean swim race in Auckland from Takapuna to Rangitoto Island and I believe the event is still being held.

If you started when 17 and are 72 now – that’s a long time to be helping others to learn how to swim..

Yes, it’s a lot of volunteering. I’m still doing it and still love it.

When did you join Avalon Beach SLSC?

I joined Avalon Beach in 2004. Before that I was a member of Southport SLSC on the Gold Coast. 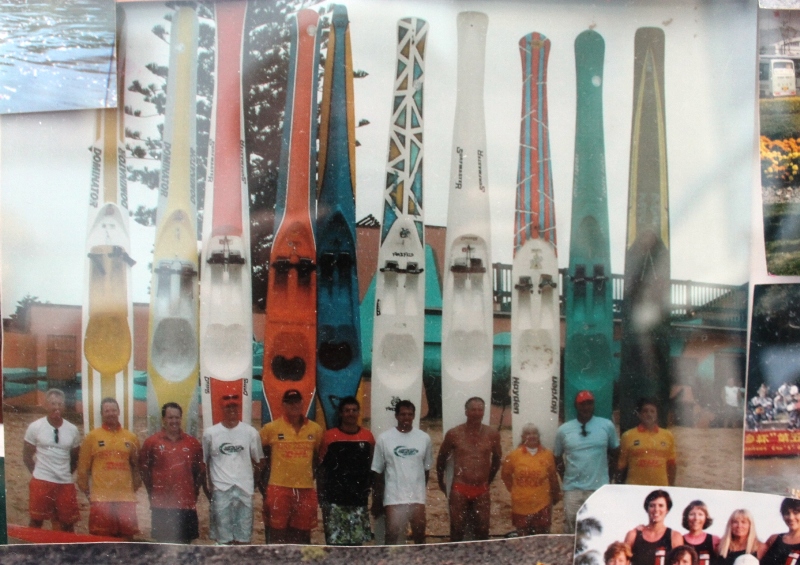 At Avalon - old clubhouse in background - 3rd from right.

Yes; I did my first patrol last Saturday, the day the 2014/2015 season opened. I love my patrols because you get to see the happy people at the beach. I’m not sure if it is because I am older but a lot of people come and talk to me. Last week someone from Newcastle and asked me why there were so few people swimming and I answered “because it’s cold!”. Maybe Newcastle is colder?

My job on patrol is to watch all the swimmers. If anyone gets into trouble I get one of our young, keen patrol members to go to the rescue.

You still do swims at Palm Beach in the morning with a group?

Yes; we call ourselves the Barrenjoey Breakers. There are about 19 of us of all ages - even one lady who is older than me! There is no commitment with this group; you just show up at the time and swim. We had a new lady come last week who was afraid of the ocean. I gave her a lesson in the pool and then she swam from the rock pool to the flags. She was really happy.

So you are still teaching people to swim ?

Yes. I teach privately, one on one. If they are in Surf Life Saving or the kayak club (I am a member of the Manly-Warringah Kayak Club) I give them 3 free lessons. I have given lessons to a number of people who are afraid of the ocean and got them back into enjoying swimming in the ocean.

In the 55 plus years you’ve been teaching swimming, what are the major changes you have noticed in what was taught then and now?

It’s a lot faster now because the stroke now goes down the side rather than across the body. People must learn to dive through the waves. I was in the big swell at the Bilgola Ocean Swim last year and got caught in the big waves. I went down to the base of the waves and watched them going over the top of me. It was beautiful and people need to learn to do that.

There have been a lot of developments in safety too. Life jackets, emergency calls, resuscitation methods and defibrillators are great and resuscitation is being taught in schools. Everyone should learn the basics of resus. and it saves lives.

While on ocean swims – you are still participating in those?

What is the best aspect of going in the Ocean Swims?

I love the waves and it is a competition that I am still able to do I like the challenge – they are all different. I love the Palm Beach to Whale Beach – The Big Swim. I swim wide and stay clear of the crowd so I don’t get kicked or pulled under.

Do you like the new Avalon Beach SLSC clubhouse?

Yes; it’s fantastic. I’m using the gym, doing Cross Fitness. Things I’ve never done before in my life. So I hope I’m getting fitter. I’m trying for the Australian team to go to the Dragon Boat world championships in Canada next year. 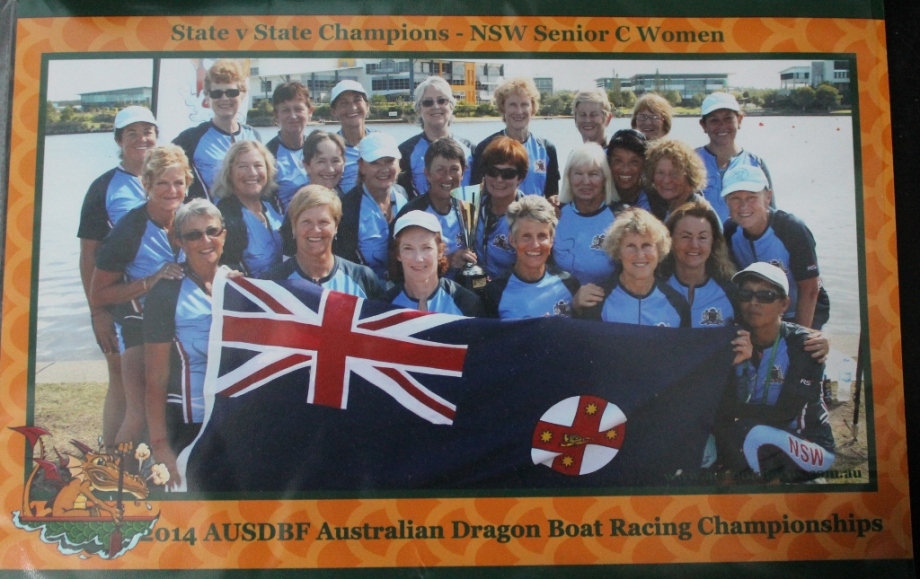 After a lifetime of being involved in the pool and ocean-what attracted you in first place? 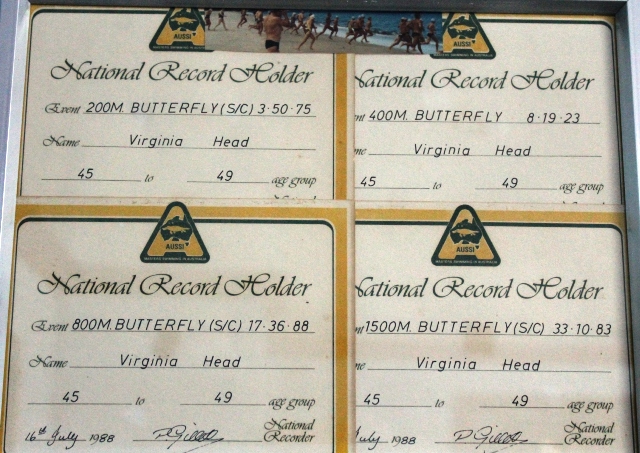 I grew up in Canada on Lake Huron. Very small waves. So it was natural for me to be attracted to swimming. I got a job as a lifeguard at the swimming pool in Sarnia and it just flowed on from there.

Have you ever saved anyone here?

Not while on patrol, but I have been out with someone paddling on a ski when they fell in and got caught in the rip at Palm Beach and I had to leave my board and go to their rescue. I’ve been out at Palm Beach when sharks have gone underneath the ski. I’ve never paddled so fast as I did then!

What is the best thing about being involved in Surf Life Saving?

It makes me feel proud to say I am a life saver and help others to stay safe.

So, are you looking forward to summer?

Yes. My greatest concern is that there are so many people of different nationalities who come to the beach and don’t swim between the flags. I started a program at Dee Why for newly arrived Tibetans to learn to swim. I’d like to see everyone learn about the dangers of rock fishing and the waves. Perhaps Surf Life Saving could help.

There’s not enough 70 year olds working at being fit. I got kicked off of Dragon boats at 50 because I was too old. In surf life saving, the young ones have told me that after 50 I shouldn’t be on a ski, which I ignored, of course. It used to be 50, now perhaps it’s up to 60, so there is some shift. 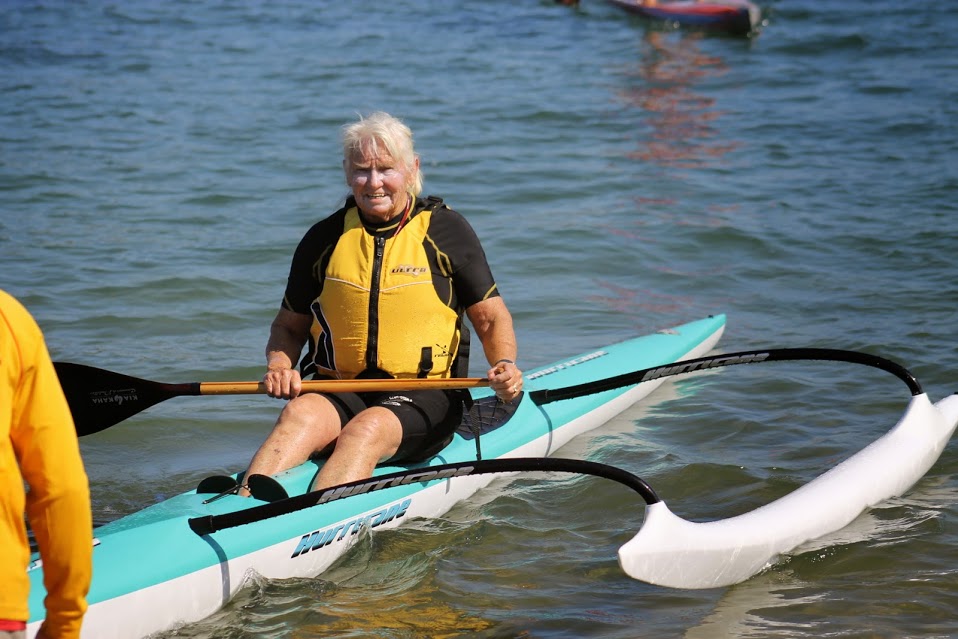 Do you think our surf beaches would benefit with multilingual signs or fines to be handed out to people who wont swim between the flags?

We are actually getting water safety signs written in Tibetan as well as English. Perhaps multilingual signs could help tourists but I think that people who live here should learn to read and speak English.

I’ve often thought of this and I think I would like to be a dolphin. I remember saying to Malcolm that I must have been a dolphin in my last life.

I like Palm Beach because I enjoy swimming there and when there is a bit of a swell I can catch a wave. I love Lion Island too. The Lion Island Challenge is on this week end and I’m doing it in my OC1 this year. I’ve raced In outriggers in Hawaii and at Hamilton Island.

What is your motto for life or a favourite phrase you try to live by?

Life is what you make !! 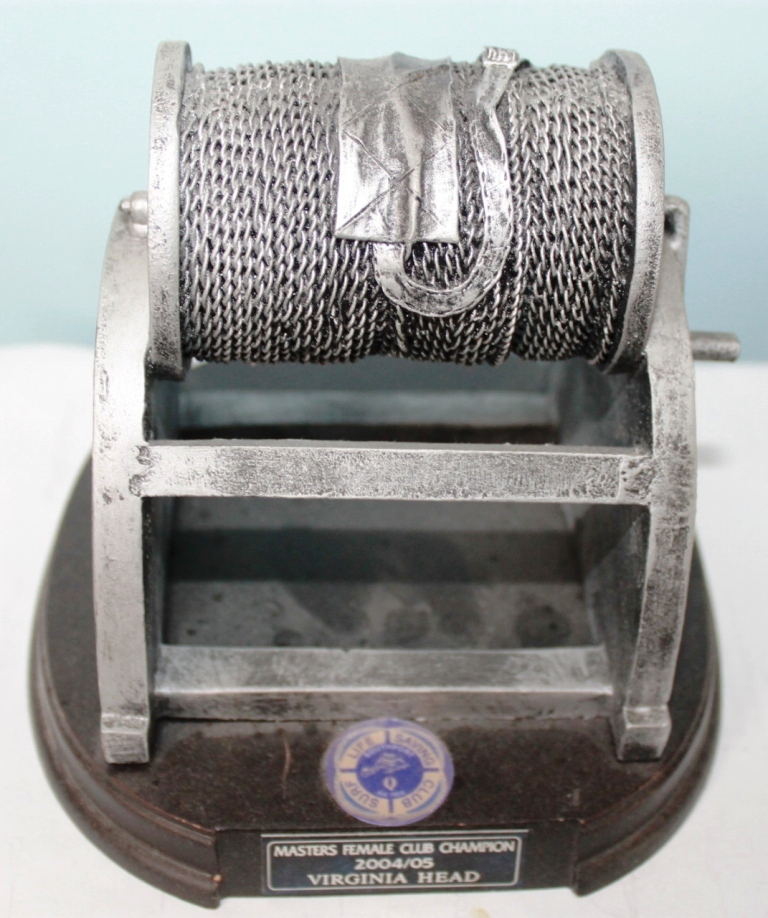 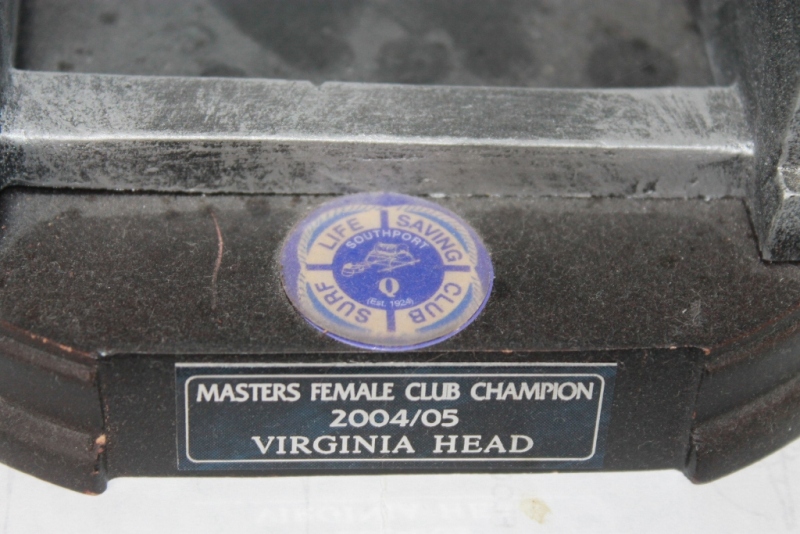 Some of Virginia's medals. 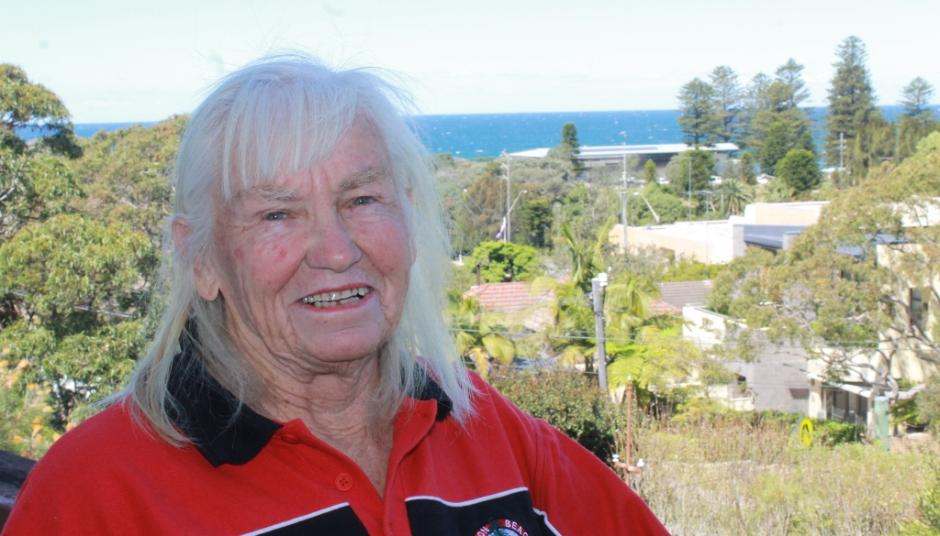 The view from Virginia's Home to Avalon Beach SLSC .