On the walls of Avalon Beach Surf Life Saving Club, among the shields and even used as one of the best shields ever in this case, is a range of surf equipment that stems from a pre-fibreglass age and when men knew how to do it for themselves with a few woodwork tools, a lot of ‘know-how’ and from what is available, material wise. In post WWII Australia bricks, metals and even wood was in short supply. Re-gearing a Nation from defending itself to building itself did not happen overnight. If you wanted to build a home you had to learn how to make bricks yourself, apply to get on waiting lists for certain amounts of necessities or even ‘luxuries’ like carpet and do the best with what you could find in surplus or recycle from discarded odds and ends. From this necessity and lack sprang some of the most betiful skiffs, paddles, boats and whatever was needed to fulfil getting up and getting on with it in all walks of life, including saving lives on our local beaches.

Ken Davidson (a Life Member of ABSLSC for 46 years service) remembers this double blade paddle was made by Doug Crane and brought into the club in the late 1950’s or early 1960’s. It is now awarded to the winner of the Doug Crane Classic, an annual December swim race that honours Doug Crane’s contribution to the club. 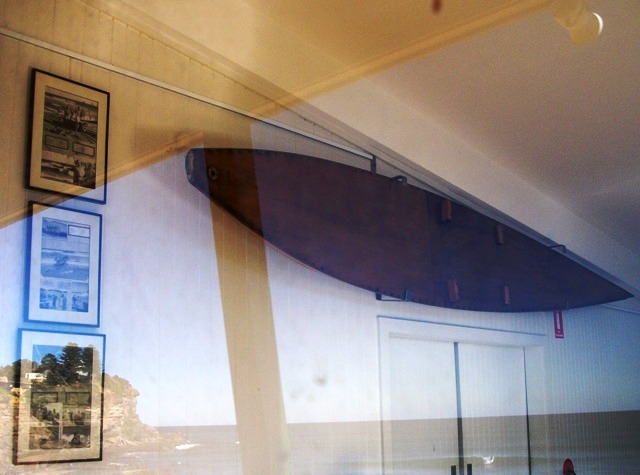 Doug Crane was a Naval Architect, Avalon Beach Surf Life Saver and keen fisherman. Getting to the fish offshore as well as the club having the equipment they needed during the post-war scarcity was solved by building a skiff (pictured) and later a surfboat (below). The skiff and paddle form part of ABSLSC’s Surf Craft memorabilia and, as built by a member, are priceless. The craftsmanship, ingenuity involved and quality are testament to skills and how practical functionality can also be appreciated long after modern versions have replaced these classics.

The word "skiff" comes from the Middle English skif, which derives from the Old French esquif, which in turn derives from the OLd Italian schifo (‘a boat’), which is itself of Germanic origin (German schiff and Scif ‘’a ship’). This term was applied to any flatbottom open boat of shallow draft, having a pointed bow and a square stern and propelled by oars, sail, or motor. The Gladstone skiff, although more like what is now termed a kayak or canoe, would be a well known example of this term applied to such vessels. Nowadays these particular surf crafts are called ‘surf ski’. The skiff with a sail has developed into sailing boats bearing the name "skiff" of various classes from 10ft to 18ft.

The first surf skis, which originated on Lake Innes, Port Macquarie, were used by brothers Henry and Jack McLaren from 1912 and applied to work around the family’s oyster beds before being used on the surf beach. Surf skiffs, or skis, as well as paddleboards when they too were developed, formed part of the lifesavers equipment from earliest days and are still in evidence on Australian beaches throughout the season as a quick means to get into the water and to a bather in peril. Today they are called 'rescue boards'.

Skiffs, in all their versions, have plied our waters for work use and leisure since records were made;

The sea is delightful after emerging from these black, forests; — its eternal surf on the dazzling  beach commands your attention; and the breezy coolness atmid-day, even in the height of summer, with the variety, of seashells and medusae washing ashore, and the white skif  with cedar or lime bound to Port Jackson, make the sea coast much pre-ferable to the bush. Before getting to Terrigal we were com-  pelled to cross the head land of Tudibarring, a precipice five  hundred feet high, with the path not the breadth of your sofa at  the very edge of the abyss. It was quite nervous — as the rock rather overhangs, and we could just see the foamy lather of the  dashing spray. JOURNAL OF AN EXCURSION TO BRISBANE WATER. . (1826, December 20). The Australian (Sydney, NSW : 1824 - 1848), p. 3. Retrieved from http://nla.gov.au/nla.news-article37071619

THE ANNIVERSARY DAY IN SYDNEY. - The weather in Sydney on Thursday was all that could be desired for the due celebration of the Anniversary of the colony. The Anniversary Regatta stood foremost among the sports of the day, and was conducted with great success. The wind was too strong for the skiff races, but admirably suited for the sailing matches. The A. S. N. Company placed the steamer Governor General at the disposal of the committee as a flag-ship and, with the attraction of a band, the company on board enjoyed themselves thoroughly. Sir William Denison was present during a portion of the day. Mr. G. Thornton noted as starter. There were fifteen races, principally rowing. The champion skiff race was won by Candlish -- McGrath, White, and Punch, who started, having their skiffs capsized. A race of amateurs, in four-oared gigs, was won by the Sandfly, pulled by Messrs. K. Howard, W. Mason, F. T. Fitzhardinge, and H. B. Fitzhardinge, W. Howard coxswain. A race for all men pulling a pair of oars in watermen's skiffs, was won by H. White and T. Deward, beating Punch and McGrath, T. and G. Mulhall, and four others, after a keen struggle. The Frolic, Mr. Younger, won the second-class yacht race, and Mr. Dean's Mischief the first-class yacht race, beating the Annie Ogle, the Ida, the Surprise - which at first led, but carried away part of her gear - the Australian, and the Blue Bell. McGrath beat Deward in a race in licensed watermen's boats, with a pair of skulls. A race in bonafide whaleboats, pulling five oars, was won by the Mulhall's crew, beating Day's crew of Londoners, who, however, had the disadvantage of pulling against fresh men, after having taken part in previous races. A very gratifying spirit of harmony prevailed throughout the day amongst the competitors. A few persons assembled at Lady Macquarie's chair, in expectation of entertainments which were announced to take place there, but did not. Watson's Bay and Mr. Billing's menagerie, were popular places of resort. Thousands went to Manly Beach, where various amusements were provided, an entertainment by Professor Parker concluding the day. SYDNEY NEWS. (1860, January 31). The Maitland Mercury & Hunter River General Advertiser (NSW : 1843 - 1893), p. 3. Retrieved from http://nla.gov.au/nla.news-article18645830

Assembling and Finishing a Double-Bladed Paddle

2. Draw out the pattern for your blades. You can look at blades online or visit a kayaking supply store to get ideas on size and shape of the blades.

3. Cut the 2-by-2 inch board to the length you measured. Measure the board to locate the center. Round the board with the draw knife to create handles or hold points. Sand the board until the handle is comfortable in your hands.

5. Place the 2-by-2 inch board on a flat surface and glue the blades to the board with marine grade glue. Clamp the boards together until the glue sets. Check the glue's label to see the appropriate wait time. Most marine glues will set within one hour.

6. Cut the blade shape that you previously drew out of the boards with a saber saw. Shape the blades with the draw knife and sand all the edges until smooth.

7. Apply a layer of stain with a cloth over the entire paddle and allow it to dry.

8. Seal the paddle with six to seven coats of marine spar varnish. Allow each coat to dry before adding the next coat. 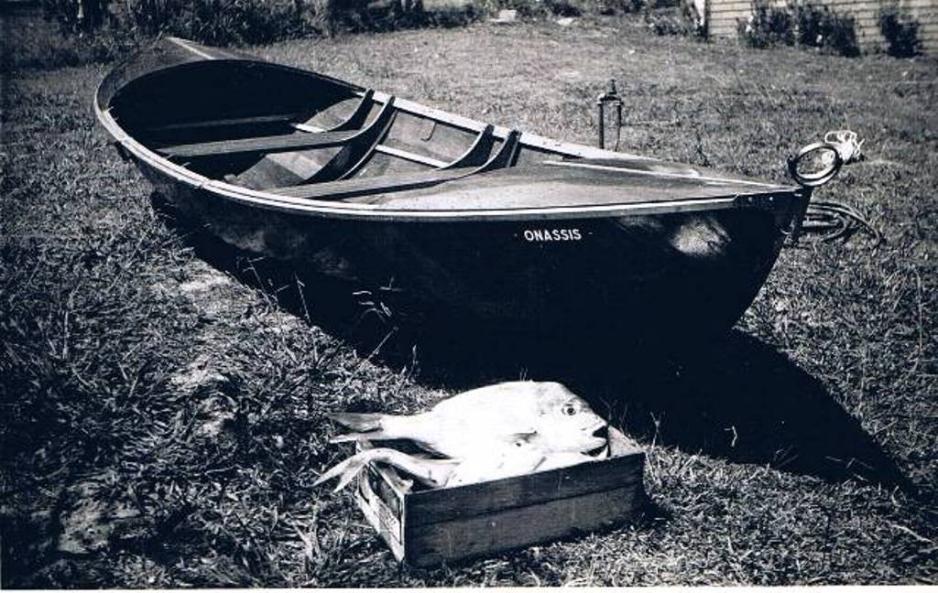 Doug's handmade boat - the Onassis! Photo courtesy Doug and Joan Crane. 14.6 feet with 3 foot beam, and it could be rowed from two positions and it had a traditional sweep oar.
DOUG on this: The Army had all the coachwood nails in the country because they needed it, you see you couldn’t buy the stuff, and at the end of the War they had all this surplus stuff out at Black Wattle Bay, which was all you could get; and it was 1/16th of an inch thick and about four and a half inches wide, each plank, and so I built a frame first. 237 planks went into it and they were double planks, in fact they’d be triple planked; we’d put a couple together and lay them over on the frame, and they’d lose a bit of length. At the time I had to determine all this from TORS, and I met a bloke who used to come to the dockyard to flog off certain chemicals, and one of the chemicals that he had on his list was a fantastic wood glue; so I’d lay one of these planks over the other and the next day be able to do the other side. 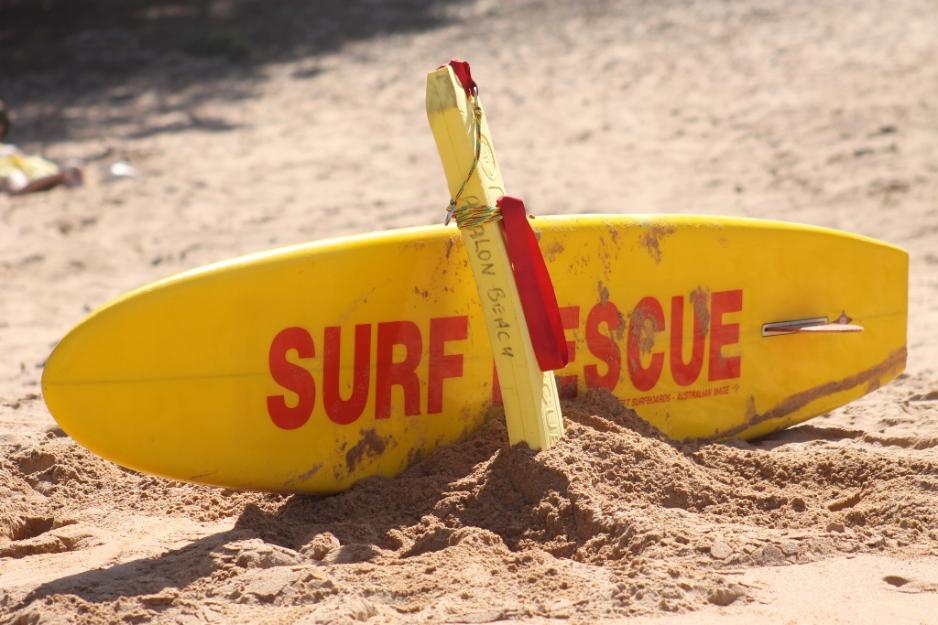