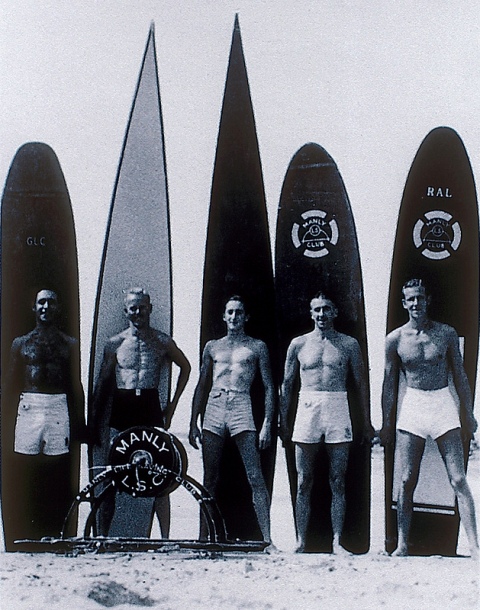 All roads lead to the surf. So we find –when the car Joins the stream of traffic northward bound for the wonderful beaches that fringe the coast from Manly to Broken Bay. At last parking space is found In the ranks of cars that crowd the ocean parade of one of the further resorts. The crowd is In holiday mood, and there Is pleasure In watching the living, colourful pageant before our eyes.

A murmur In the crowd, and we turn to see an outward surf-boat planing down a rushing green hill of water, the spray flying from its bow. A towering statuesque figure In the stern dips and strains on the great rudder oar; the craft turns, rides head-on through a crashing "dumper," and soon Is tossing, a dazzling white shape, on the blue water further out. As it surges from trough to crest, there Is a glimpse of four bronzed Argonauts straining at the sculls, while the sunlight glances on the white helmet of the young Jason In the prow and the flashing sweep of oars. These are the men our beaches breed; Vikings of peace whose mission Is to save.

SURF HEROES.
Out beyond the breakers Is a youngster lying full length on a huge surf-board, which he paddles slowly with his arms, heaving lazily on the' swell. He crouches, watching a following wave, and next Instant is erect, with legs apart and arms outstretched-a picture of Neptune's charioteer driving his racing team from shield-shaped ear.

Aloft in the watch tower is "Ossie," the team captain, yarning with a group of idolising youngsters. With arms clasping sunburn legs they loam how their hero and his mates showed the South Africans the noble art of surfing at Durban. For among the senior clubmen of the coast are hundreds of A.I.F. men-great-limbed, massive fellows In their prime, who not long ago put the fear of death Into the Prussian Guards. And the younger men, still with the grace of the schoolboy athlete, are sons and brothers of Anzacs. Lithe and slender of limb, theirs are the depth of chest and breadth of shoulder that come of battling with a stubborn surf from childhood,

A delighted squeal from little "Skeeter" interrupts the talk. Following his pointing finger we see "big brother Bluey" carving his way through a heavy sea to his "patient," who is treading water a hundred yards out. Bluey (aged 15) has the bolt, and is practising for the great day when he will Join the life-saving club, the beach Asgard where dwell the kings and heroes of the surf.

Well, the day is getting hot and the water is inviting. Answering its call, one is soon threading a way through the ranks of splashing bathers to where a dozen heads bob in a line far beyond the rest. These are the vanguard, masters of every kind of roller that sends the greenhorn gasping to the shallows. The experts Ignore a dozen seemingly identical breakers and seize unerringly on the coveted "shoot." 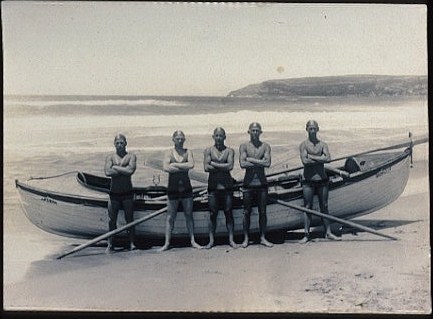 Beware of that tall billow with the concave face! Its crest will curl and crash vertically, seizing the foolhardy surfer, to roll him unmercifully head over heels, dragged spread-eagled hither and thither by a dozen seething cross-currents. Such is the "dumper," foe of the unwary. But mark how the cognoscenti deal with this monster. Retire to where they break In a tumbling yard-high bank of seething foam, with the spindrift flying from their crests. Now, break the charge of Neptune's cavalry; turn side-on to their onslaught; lunge and spring for their manes, every muscle braced for the shock. Or, again, dive for the bottom, feel them crash on your feet as they thunder over with a noise like distant cannon. Then spring for air with the frothy backwash creaming on your face.

The dumpers cease for a time, followed by a series of "flats"-waves with the full face of a shoot, but whoso lighter green betrays the hollow back which means lack of pace and body. Suddenly there Is an eager surge and the front-rankers are racing out to "get on to" a shoot. Yes! There Is no mistaking the dull green bulge of that big roller capped with the curl of foam which Is the badge of speed. The vanguard wheel ns one man, kick off and lash the water with frantic strokes as the wave Is on them. The shoulders and upflung head surge forward, racing like the figurehead on some storm-driven galley. The cave crashes and they are lost to view, but soon the broad back shows, head down, boring torpedo-like through the shallows. . . . Fifty yards Inshore a dripping figure rises among the wondering paddlers and struggles back for his next ride.

RESCUE.
Away to the left a bather is caught in a channel, and heralds the fact with much splashing and struggling. In a flash a man has plunged in, and is flogging his way through the choppy water with the saving belt round his chest. At intervals on the shore are three reelmen standing like statues, calmly paying out the lifeline with hands raised over-head. An upflung arm is the signal for them to bend to the task, hauling rhythmically hand over hand, with muscles starting under the double load. After a long pull the couple are wading back to safety. The rescuer grins, slaps his salvage on the back, and flings the belt at a comrade with a laughing word. A fine boy this, yet typical of hundreds of young savers. He Is breathless, hut dashes the water from his eyes, and mounts the sloping beach with all the grace of the marching stride he has learned in sand and shallow water. The poise of head, the swinging shoulders, and sway of hips are a delight to the eye, while the firm, rounded limbs move with effortless grace. Truly a feast for our sculptors-a model all ready in living bronze.

HALCYON'.
After a swim, a smart run along the sand is voted breathless work, so one sits for a space like the Lotus Eaters.
To watch the crisping ripples on the beach
And tender curving lines of creamy spray. 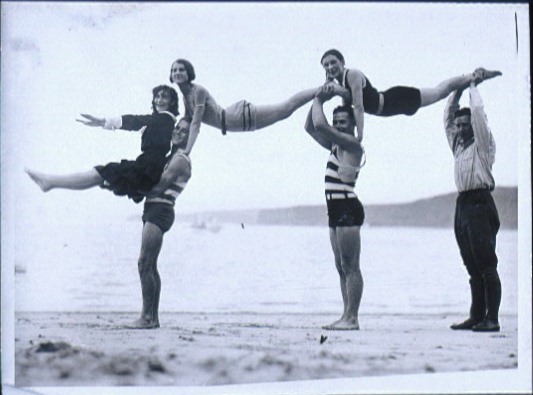 The sun pours down a flood of streaming golden light like a benison upon the sand. Its’ warm kiss glows on the skin still tingling with the cool salt drops; the heavy, spray-laden breeze trembles on the limbs like a caress, and the air is quivering in a mellow dream from the great blue arc of sky down to the living glow of sand. Under half closed eyelids we are aware of the bright flash of colour-the flutter of a silken wrap, a gleam of gold on some girl's rounded arm; rainbow patchwork of sunshades and the flowing lines of sinewy limbs. Beyond it all, the boil of surf and a haze of distant headlands; above It all, that clean, blue vastness- the miracle of an Australian sky.
Why envy the gods of Homer, debauched In the marble palaces of Olympus, swilling nectar from gold and Ivory vessels? What need of nectar when the mouth rejoices in that cold, salt freshness which only the surf can give? The gods of Tennyson's poem lived to the sound of
Clanging fights and flaming towns
And sinking ships mid praying hands.
But what have we? The sea's dull soothing roar and the happy shouts of children. Basking in the rich sunlight we know perfect freedom and relaxation In every fibre-the happy state when repose of soul and limb recalls to life the shy little gleams of beauty lost In the scramble of daily life, Banished by the magic breath of sun, sea, and air, cares seem very far away. SUN AND SURF. (1928, February 25). The Sydney Morning Herald (NSW : 1842 - 1954), p. 13. Retrieved from http://nla.gov.au/nla.news-article16444810