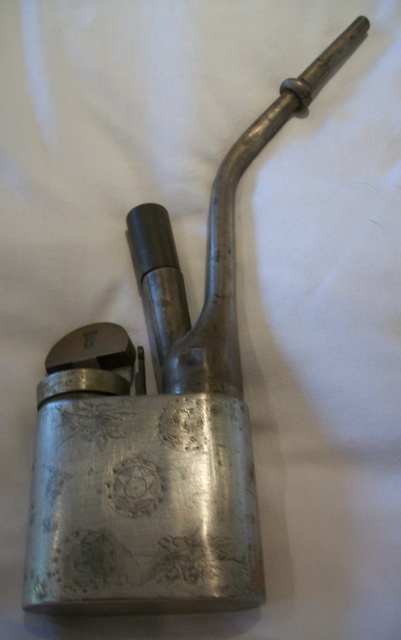 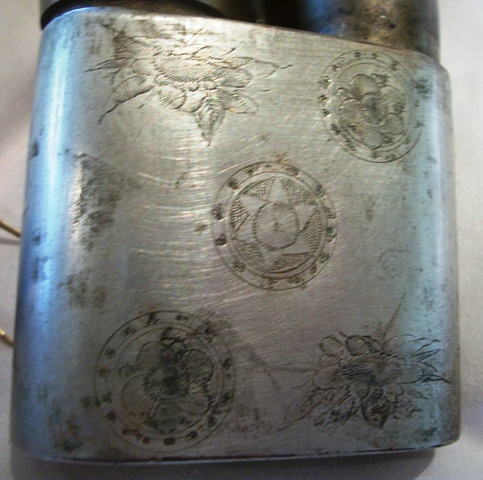 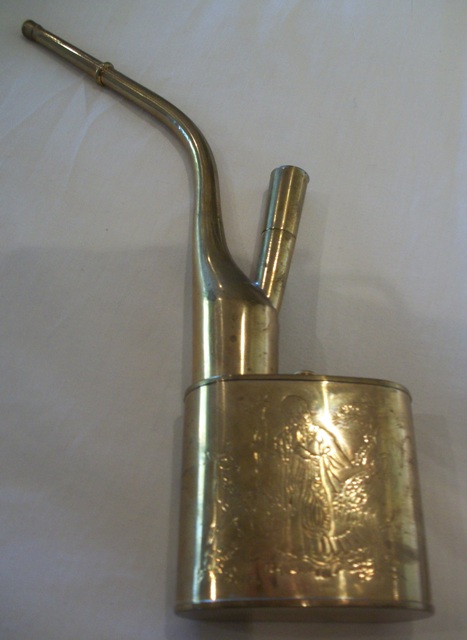 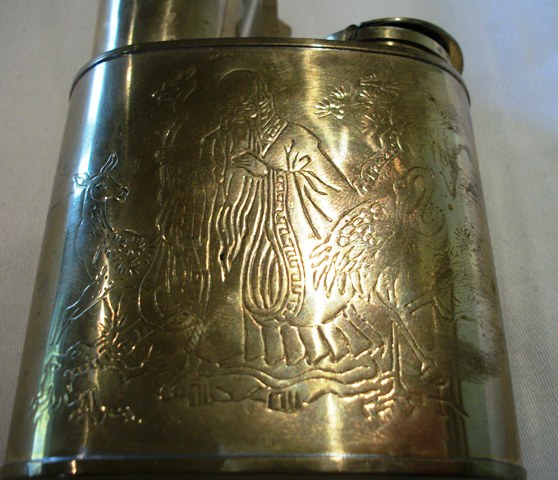 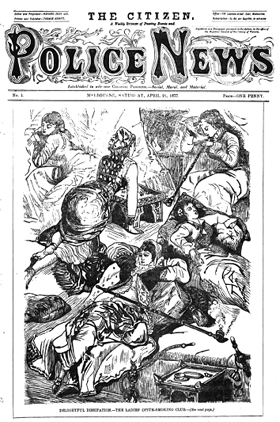 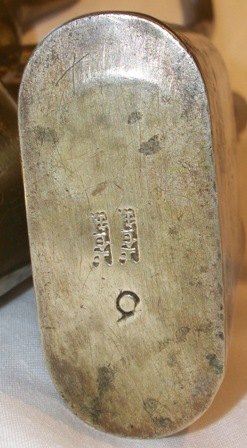 Recently a discovery was made in an attic of this opium pipe. The house is over a hundred years old. The pipe is said to come from the Braidwood area originally where relatives of the re-discoverer had a farm with frontage to the Mongarlowe river. In 1851 gold was discovered along and in this river and attracted Chinese peoples along with other settlers. By 1861 there were an estimated 13, 000 Chinese people newly arrived from China (some sources state migrants came mainly from Kwangtung, now Guangdong) in NSW and around 12, 000 of these were on goldfields.

The markings on the base of the pipe and on the inner lid of its opium storage vessel may predate when silver was exported from China to the world and their adoption of incorporating or copying English style silvermarks for this trade around 1775 or, as is more likely, it was made solely for a Chinese market and brought to Australia by a hopeful Chinese miner.

Until 1906 opium was legal in Australia and could be purchased from a grocery store. After it was banned the trade was driven underground and persists in other opiate forms even today. Laudanum was a popular form of using this drug during the Victorian era and was prescribed for everything from headaches to tuberculosis with patients quickly becoming addicted.

The markings or stencils on this pipe are poppy motifs from which opium is derived. The weight of the pipe itself is close to a kilogram and as silver currently sell for around $28.00 an ounce it could be worth as much in weight as it may sell for to a collector. The purity of Chinese silver forms part of an assessment of worth.

The second opium pipe here was found only a few years ago and is made of brass. The motifs on its sides place are Chinese and the symbols on the other side, a sage with a dragon-head shaped staff, deer, peach tree and crane are all symbols of longevity, happiness and good health as opium was considered to produce longevity in times where diseases such as cholera were rampant, often causing death, were treated with opiates. Opium causes anyone too look old beyond their years and emaciated through continuous use. This pipe would be worth between $100 and $150.00 if resold.

The motifs on this one are the ancient Chinese Taoist god of long life and luck. Called Shou-lao, the popular name of Shou-xing, the stellar deity of longevity or ‘Old Man from the South Pole’ he also usually depicted with a deer, dragon headed staff and crane. Pne trees and peach trees in blossom are also familiar parts of his motifs . The Deer are the mount of Shou-lao, and the only animals capable to find the plant of mortality, “ling-chih” said to grow in the base or between the roots of certain pine trees.  In the late Song Dynasty (960-1127 CE) stories about an "Old Man from the South Pole" arose in which this man gained certain powers from a so called "Old Man Star" entity among them the power of long life. The pair of cranes symbolize happiness, fidelity and longevity. The peach tree (or pine tree), in Chinese medicine, many curative qualities and is therefore associated with longevity. The dragon shaped staff is a symbol of spiritual power.

Guangdong is a province on the South China Sea coast of the People's Republic of China. The province was previously often written with the alternative English name Kwangtung Province.

MINING GOLD AT BRAIDWOOD From; http://www.argylecounty.com.au/towns/braidwood.html

43. On the influence of Opium-eating on Health and Longevity.—A recent trial at Edinburgh, arising from the refusal of a life insurance company to pay a certain-sum,- which they had insured on the life of Lord Mar, on the ground principally, that the insured Was in the regular practice of using laudanum to excess at the time he effected the insurance, has elicited from Dr. CBKISIISOX some interesting remarks in our cotemporary, the Edinburgh Medical and Surgical Journal, for Jan. last, on the- question, whether the habit of opium-eating is detrimental to health and longevity•? In the trial referred to, several physicians were examined, who all considered the Habit very injurious;, but few special facts were known to the witnesses, and these few rather -countenanced the supposition, that a fair proportion of opium-eaters reach an advanced age.

"It does not necessarily follow," says Dr, Christison, "that the habitual use of narcotics must tend to shorten life. The practice of snuffing, smoking, or chewing tobacco, is not believed to have any such effect.' It is true, that the much more injurious and more permanent effects which every repetition of a dose of opium produces on*,the digestive, organs and on the nervous system, supply a stronger presumption of ultimate injury to life in the case of that drug, than exists in the instance of tobacco. But even these circumstances must not be too easily assumed as sufficient grounds for the belief that the practice of using opium in excess tends to shorten life. For it is well-known, that some disturbed states of the nervous system, such as hysteria, may exist for a long time, and that the functions of digestion may often be long and seriously disturbed by ordinary stomach complaints, without life being materially shortened. It is necessary then to appeal to special facts.

"I have not-been able to find any facts of the least value on the subject m medical records. The following eases, however, have been communicated to me by several of my friends, in whose information I can place reliance.—1. A young lady of five-and-twenty has taken it largely for fifteen years. It was first administered secretly by her nurse to keep her quiet and save trouble; and the unhappy lady was subsequently compelled to keep op the practice for her comfort. She enjoys good health.—-. A female, a patient of mine in the Infirmary, a martyr to rheumatism, took it for ten years previous to her fortieth year, in the quantity of a drachm daily of solid opium. She then gave it up. Six months afterwards she was attacked with jaundice; subsequently she was several times severely ill of rheumatism; and she died in her forty-third year of consumption. This women, however, led a licentious life from an early period. —3. _A well-known literary gentleman, who has taken laudanum with some intermissions, for twenty years, and occasionally to the extent of nine or ten ounces daily, has now attained his forty-fifth year. He is spare in form, looks older than he is, but is capable of undergoing a good deal of bodily fatigue, and enjoys tolerably good health so long as he takes sufficient exercise. His allowance, when I had last an opportunity of conversing with him, was about nine drachms of laudanum daily.—4. A lady in this city, after drinking laudanum to excess for upwards of twenty years, died about the age of fifty. No information could be supplied of the disease of which she died.—5. A lady of the same age takes about .three ounces daily, and has used it for many years. She appears to enjoy good health-.—6. A lady, about sixty years of age, has taken it above twenty years, and is in good health.—7. A charwoman, who had been in the daily practice of drinking two ounces of laudanum-for many years, died at the age of sixty. The gentleman who has stated this fact, does not remember what disease she died of, although he dissected the dead body.—8. An eminent literary gentleman, I am informed, has been in the habit of taking laudanum since he was fifteen; and his daily allowance has sometimes been a quart bottle, (twenty-six ounces,) consisting of three parts' of laudanum and one of alcohol. Enormous as this dose may appear, Tarn assured the fact is Well-known to his acquaintances. He is about sixty years of age, and enjoys good health.—9. A lady of seventy,(now alive) has taken about half an ounce of laudanum daily, for nearly forty years. She enjoys tolerable health, and every year travels great distances to visit her friends*—10. Another woman of eighty died a few years ago at Leith, after taking about half an ounce of laudanum daily for nearly forty years; and she enjoyed tolerable health all the time.