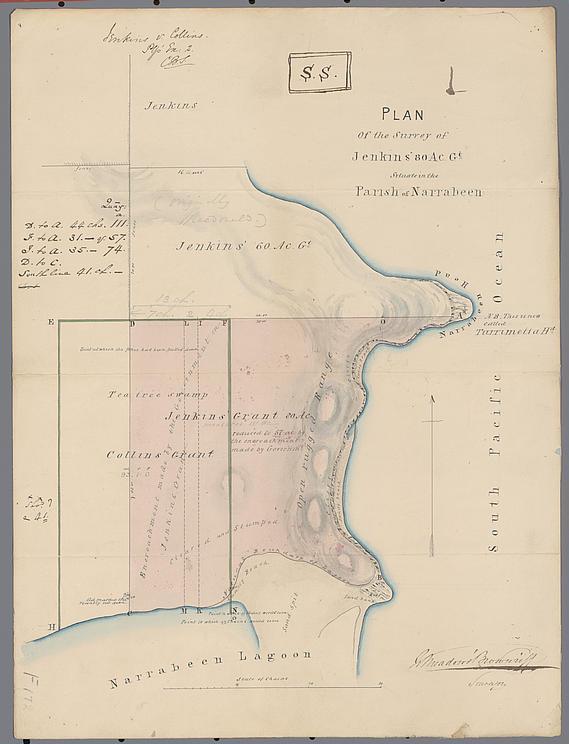 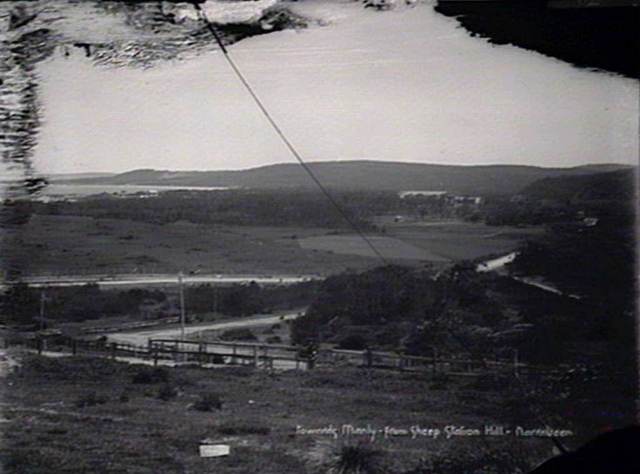 Above and Below both titled; Towards Manly from Sheep Station Hill, Narrabeen. Images d2_53089h and d2_53100 From NSW Govt Printer series. Courtesy State Library of NSW. 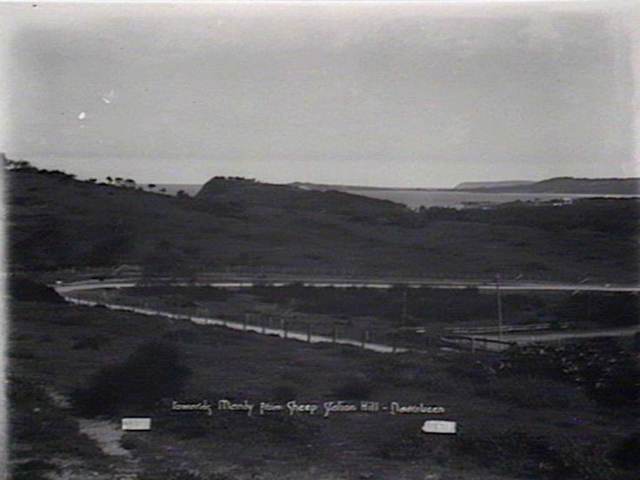 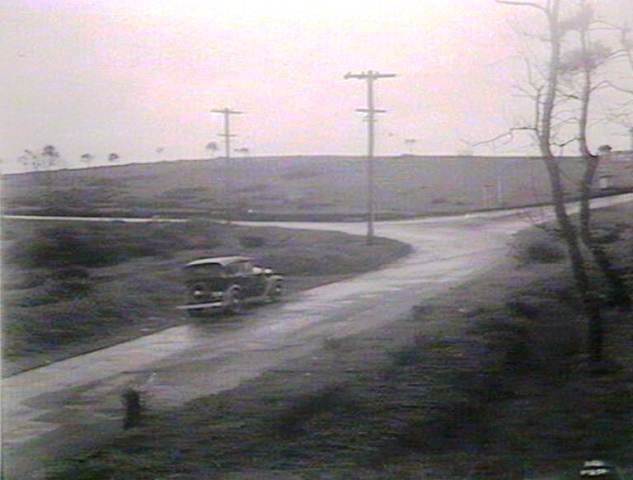 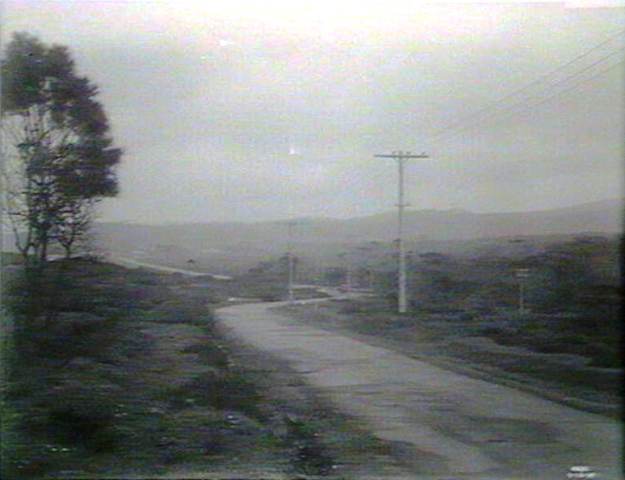 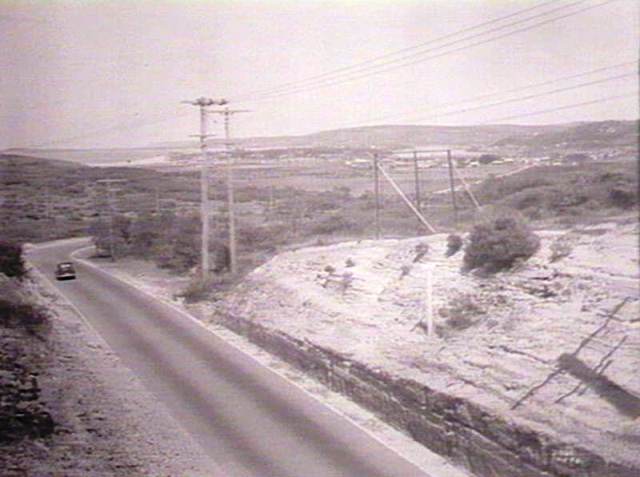 The origin of the name for this hill now is obscured. We spoke to former Mayor and Councillor David James who recalls this rise being named Sheep Station Hill as a teenager and that you could just tell the bus driver you want to alight at Sheep Station Hill and they would know where you meant, sheds a little light on a possible answer as to where the name may have derived from;

I have a remembrance that at some point in the early development of the sheep industry in NSW the coastal areas were tried out and failed due to the prevalence of foot rot caused by the damp conditions that the sheep species of the day could not cope with.  Something about running them on waterlogged or swampy ground, which part of that Jenkins land grant including the (now called Warriewood) Wetland and surrounds.

I think it may prove to be in the end more a folk memory, which is still an authentic source of history, of a failed attempt at sheep industry that was tried in the coastal regions. Fluke or liver disease is another supposed reason that early attempts at sheep did not succeed on the coast and had to await movement by the Macarthurs to the Camden and Parramatta areas (higher and better drained land). Also the only salt tolerant native grasses on the coast (femita species or kangaroo grass) while being useful as fodder were slow to regrow after grazing and soon were eaten out.

The Pittwater Offshore Newsletter's historian, Leicester Warburton, offers another insight into the use of this hill;

It is true that for a few years crime did continue to stain the fair name of beautiful Pittwater. For many months detectives were continually sent there. At one time six were reportedly camped on nearby Sheep Station Hill to watch for trouble. But, finally, active crime ceased and the district settled down to the quiet it still enjoys.

Many people tell of the outlook from this rise which shows you the lovely valley of Warriewood stretched to the western horizon and a lovely view south to Narrabeen. This hill also was well known for its steepness though;

“…So jaded were the horses at the holiday season that it was sometimes necessary for travellers to get out of the coach at steep grades and help push it up hills. This happened at Sheep Station Hill, beyond Narrabeen."

Sheepstation lookout: If you look diagonally across the sport fields, to the northwest, you will see Sheepstation Hill, separating Warriewood and Mona Vale. Before a cutting was made for Pittwater Road, it climbed up and over the steep slope. In the 1880s, coach travellers to Pittwater had to dismount at the foot of the hill to help push the coach to the top.

With its highly fertile soil, Warriewood is an area with a long history of farming. In 1829 a 350 acre parcel of land was granted to James Jenkins who established Cabbage Tree Hill farm. In 1906 the land was subdivided and sold in residential and farm blocks. The area expanded as a farming district and by the middle of the century was known as Glass City. This was due to the large number (over 3500) of glasshouses which were used to cultivate tomatoes. Pittwater Council Website.

Warriewood has also been an indication of the rural side of Pittwater and despite its swampy boggy ground yielded produce and timber for many;

The climate is so salubrious, and the temperature so mild and even, that all plants and flowers flourish with luxuriance and come to maturity and bear some weeks earlier than in other districts around Sydney, with the consequent high prices always paid for early products of good quality.

There is almost an entire absence of frost, as proof of which it may be stated that as many as three crops of potatoes have been obtained in one year from the same piece of land.

…Fine timber, including Ironbark, Stringybark, Grey Gum, Turpentine, Mahogany, Forest Oak and others are available in plenty for building, fencing, firewood and other purposes. Many of the trees are very fine and were pushing their leaves to the sunlight long before Captain Cook landed.

The fine coastal rainfall here is ample for all requirements, and the excellent loamy soil possesses that grand characteristic of retaining the moisture for much longer than ever happens between rains; the surface never cakes or bakes, so that even in what might be termed a dry season all vegetation continues to flourish, and droughts as experienced in the country districts are quite unknown." Henry Halloran & Co, The Great Warriewood Estate, 1907.

LIGHTNING FLASH. Men Struck at Warriewood. TREE SPLINTERED. Three men were slightly Injured by a flash of lightning, which struck a tree at Warriewood, near Mona Vale, on Friday. Mr. D. McLaren was clearing debris from his garden in Hill-street, and Mr. J. Skinner was watching him from a nearby house. Both men were almost blinded by a vivid flash when lightning struck a tall gum tree about 70 yards from Mr. McLaren. Every bough except one was hurled from the tree by the force of the explosion, and pieces of bark were thrown hundreds of feet in all directions. One bough, 4ft in length, was tossed 100 yards, where it struck the chimney of a cottage. Windows in neighbouring houses were shattered. Mr. McLaren, dazed and paralysed in one side, was able to reach Mr Tarry’s home, a neighbour's house, where he collapsed. He was treated, and suffered no ill-effects.

James Savage and Hermann Schrelnerp were working at the switchboard of the Mona Vale post-office, when their instruments were struck by a blinding flash. The two men were stunned, and when they recovered were almost helpless for some time. Then they returned to duty, to find that a number of lines had been rendered useless by the disturbance. Patrolling Mona Road, Constable Langhurst received a severe shock in the right arm, but' was able to resume duty.LIGHTNING FLASH. (1931, April 27). The Sydney Morning Herald (NSW : 1842 - 1954), p. 6. Retrieved fromhttp://nla.gov.au/nla.news-article16772870

Houses Rocked by Fireball. One man was temporarily paralyzed; two telephonists and a constable were struck by lightening; houses rocked and windows shattered when yesterday a fireball, exploding in a tree, smashed against an earth embankment near Mona Vale, says the Sydney Daily Telegraph.

Lighting the district for miles, the flaming missile crashed into a tall tree in Hill Street, Warriewood, near Mona Vale. There was instant confusion and terror-the tree splintered and smashed to the ground, and the fireball finished against a nearby embankment. Parts of the tree were hurled over 100 yards.

As the glare died away Mr. D. McLaren, dazed and paralyzed in one side, stumbled from his house in Hill Street, where he had been clearing away storm debis, to Mr Tarry's home nearby.  There he collapsed. He was revived later by Dr. Bruce.

Meanwhile at Mona Vale Post Office, telephonists Hermann Schrelnerp and James Savage had been struck while at their switches. They soon recovered to find that six local and five trunk lines bad put out of action. Patrolling Mona Road, Constable Langhurst received a severe shock in the right arm, but was able to resume duty. Houses Rocked by Fireball. (1931, May 1). The Charleville Times (Brisbane, Qld. : 1896 - 1954), p. 2. Retrieved from http://nla.gov.au/nla.news-article75686553

Cultural identity influenced a way of life in developing Warriewood. Many Yugoslavians who made their fortunes through hard work in the glasshouses and fields became a large part of our community were also part of the ‘growing pains’ every nation must live through and mature beyond;

I, MRS M. L.... of Warriewood Road Warriewood, New South Wales, hereby wish to apologise for having made untrue statements about the Nationality of Messrs. J. W. and I" F Szand of Sheepstation Hill, Warriewood. I find on Investigation that these statements absolutely untrue in every parameter, and I’ve had proved to me that they, their parents, and forbearers are thoroughly  English in every respect. M LOFTUS Warriewood Road Warriewood. Advertising. (1940, July 17). The Sydney Morning Herald(NSW : 1842 - 1954), p. 1. Retrieved fromhttp://nla.gov.au/nla.news-article17680164

Sheep Station Hill has also been the scene of a few deaths. One notable one caused by misadventure;

Stolen Car Overturns. SYDNEY, Today. In a stolen motor car Mr. Harry Slater (aged 30 years), of Dalton street, Mosman, was hurled to his death when the car overturned at Sheep Station Hill, Warriewood, near Narrabeen early this morning. He was thrown 20 yards down an embankment, and died a few minutes later with a fractured skull. Miss Annie Ryan (19), of Harbor street, Mosman, who was also in the car, received a fractured collarbone and injuries to the head, legs, and arms.. She is in hospital in a critical condition. Although dazed, she walked three miles to Narrabeen and told the story of the accident. The car was stolen last night from the residence of Dr. Wardlaw. of Bellevue Hill. The girl was admitted to Manly Hospital. HURLED TO DEATH. (1930, August 2). The Mail (Adelaide, SA : 1912 - 1954), p. 3. Retrieved fromhttp://nla.gov.au/nla.news-article63655236

One other mystery that perplexes; we do hope Gip found his or her way home;