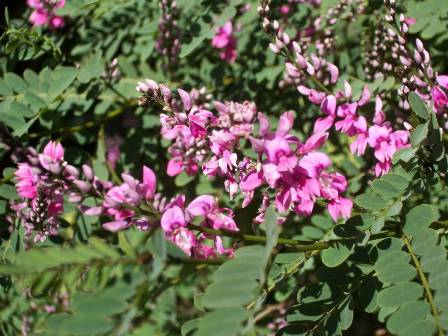 Spotted at Bayview this week this lovely Indigofera australis, known as Australian Indigo. This is a species of leguminous shrub in the genus Indigofera (Fabaceae family). The genus name "Indigofera" is Neo-Latin for "bearing Indigo" (Indigo is a purple dye originally obtained from some Indigofera species), while "australis" from the Latin, means "southern". The Australian aborigines crushed the leaves and added these to water to kill or stun fish and eels. The leaves and stems produce yellow-fawn dye with alum as mordant.

Sunday, 23 September 2012, 00.49am EST is the Spring Equinox minute or two and we are now, officially, on our way towards Summer and the longest day of the year. Here comes more light, flower scented air and a return to our trees and waterways of migrating birds. 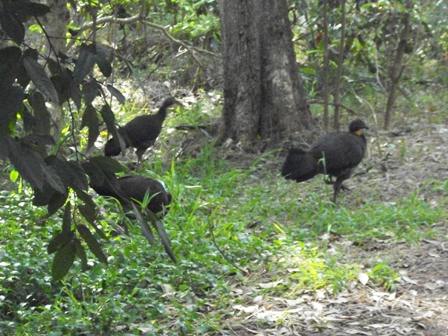 These three Bush Turkeys were spotted Wednesday afternoon foraging along the banks of Careel Creek. In recent months both the males have been spotted as far south as behind Barrenjoey High School and further north in the creek that runs behind the Avalon Bulldogs clubhouse.

The Australian Brushturkey or Australian Brush-turkey, (Alectura lathami), also frequently called the Scrub Turkey or Bush Turkey frequents many of our backyards and wetlands areas and will be nesting this time of the year of not already feeding new young. 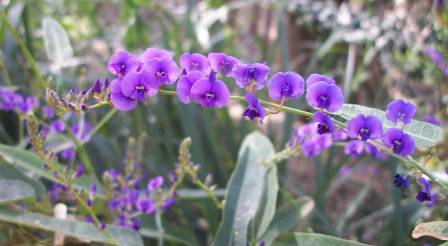 This Hardenbergia violacea, photographed in Stapelton Park, Avalon, is a species of Australian flowering Native plant, known in Australia by the common names false sarsaparilla, purple coral pea, happy wanderer, native lilac and waraburra (which comes from the Kattang language; Worimi, or Gadjang (also spelt Kattang, Kutthung, Gadhang, Gadang, Gathang) is an Australian Aboriginal language of New South Wales). It grows as a climbing vine, but also as a subshrub. Flowering in late Winter and all through Spring it makes a great fence cover which should be pruned after flowering. There are two other species in Australia; a pale pink form called Hardenbergia ‘Rosea’  and a pure white form as well called Hardenbergia ‘Alba’. 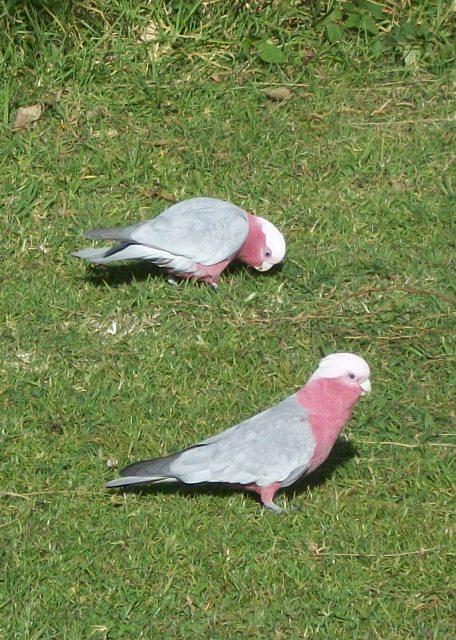 These galahs Eolophus roseicapilla, photographed this week are also known as the Rose-breasted Cockatoo, Galah Cockatoo, Roseate Cockatoo or Pink and Grey. They are one of the most common and widespread cockatoos, found throughout mainland Australia. The term galah is derived from gilaa, a word found in Yuwaalaraay (of northern New South Wales) and neighbouring Aboriginal languages.  To determine whether you are looking at a male or female by looking at their eyes; the male has a very dark brown (almost black) irises, and the female has a mid-brown/red irises.

Pittwater Weed of the Week 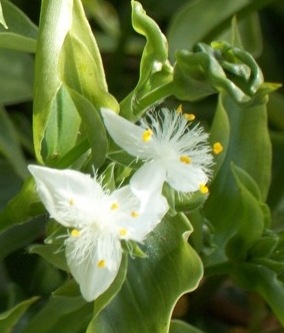 Pittwater has a significant weed problem from introduced plants. Some of these, such as lantana, are easily recognised due to our familiarity with the long battle to return these areas to their original state and reinstate native plants. Others may be mistaken for Australian natives. For a full listing of all Pitwtater weeds please refer to the Pittwater Council's website page on these.

Distinguishing Features: a somewhat fleshy long-lived herbaceous plant with trailing stems that produce roots at their joints. Its shiny leaves have dark green upper surfaces and often slightly purplish undersides. These leaves are alternately arranged along the stems and have sheathed bases. Its white flowers (about 2 cm across) have three pointed petals (7-10 mm long). these flowers are borne in small clusters near the tips of the branches.

Impacts: Trad (Tradescantia fluminensis) is a significant environmental weed in Victoria and New South Wales. New South Wales: Class 4 - a locally controlled weed. The growth and spread of this species must be controlled according to the measures specified in a management plan published by the local control authority and the plant may not be sold, propagated or knowingly distributed (in the Hornsby, Ku-ring-gai, Lane Cove, Manly, North Sydney, Ryde and Willoughby local authority areas).

Last year Council received a grant from the NSW Office of Environment and Heritage to find out the impacts of climate change on estuarine wetland and migratory waterbirds in the Pittwater Estuary. This gave us the great opportunity to find out exactly what waterbirds are present in Pittwater and which habitats they use to survive.

The Australian Wetlands and Rivers Centre (part of the University of New South Wales) carried out the surveys which occurred over 6 months from January to June 2012. They found 30 different species in this short space of time with the highest diversity in Careel Bay. An important species identified was the Eastern Curlew which is listed as a migratory species and appears on three migratory bird agreements which Australia has with Japan (JAMBA), China (CAMBA) and the Republic of Korea (ROKAMBA).

The surveys also looked at disturbance the birds received with human activities and dogs off their leash topping the list. In many cases, this disturbance prevents the birds from feeding and resting which can lead to them no longer being present in Pittwater. The results of the impacts of sea level rise were not much better with most areas currently used as feeding and resting habitat being affected.

The Australian Wetlands and Rivers Centre stated that we have a low number of migratory shorebirds. However this is not unusual compared with other datasets and linked areas such as further up the Hawkesbury River. The Pittwater Estuary has great habitat areas such as Careel Bay and Winnererremy Bay, but these are much smaller than other similar places within Sydney such as Botany Bay. This provides an incentive for us to take care of what we have so our beautiful waterbirds remain for us for many years to come.