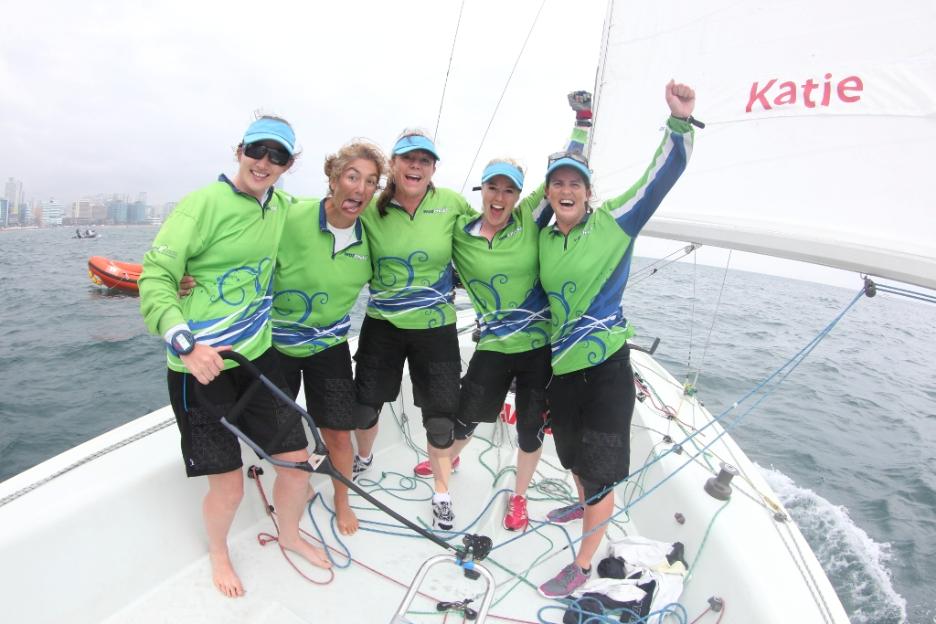 Katie and Team were lucky to be offered the wildcard for the event after Katie’s ranking dropped to 175 (highest being 2) due to some time out and also recently becoming a mother.

The girls decided it was a great opportunity to get some of the old team back together and go to the event to have some fun. Well the girls did more than just that, finishing 5th in the Round Robin they raced Swedish Match Racing Olympian Anna Kjellberg and Team and won 3-0. Progressing to the Semi Finals they were paired against the current Match Racing Gold Medalist Spanish Tamara Echegoyen in 3 hard fought races with multiple lead changes but did not come out on top. This left them to fight for 3rd place in the Petite Final. Racing against Russia’s Match Racing Olympian Ekaterina Skudina they lost the first race and fought back to take the next 2 races with a 2-1 scorecard to take a podium place.

Katie, Stacey and Jessica were all previous members of the Australian Women’s Match Racing Team and when that concluded they all took some time out to focus on other things. Jessica has become a science teacher at an International School in Belgium, Stacey is running the Reichel Pugh 66 ‘Black Jack’ based in Brisbane and Katie has been busy with a newborn baby.

We asked Katie for a few insights into how it felt to get back under competitive sails;
‘It was fantastic to be back on the water again, after some time off and then maternity leave I was ready to get back into it. Ideally some training and a lead up event would have been great, but time didn’t permit any of that so we went straight into the event without any training’.

‘Our result was well beyond my expectations for the event, whilst I always want to win the aim for the event was to get back into sailing for fun and with friends, to be able to achieve this and a podium finish was fantastic’.

‘It was definitely different traveling to this event, the first time I have had a family to travel with me! My husband came to help look after my baby girl Chloe (6 months), whilst I was on the water.

‘What is next? Good question, right now my priority is my baby girl but I can’t lie that I must say I have the sailing bug again, and will be keeping an eye on the Regatta Calendars to see what I can possibly fit in.

Tamara Echegoyen, Spain, is the 2013 ISAF Women's Match Racing World Champion. But final opponent Camilla Ulrikkeholm of Denmark didn't let the Spaniard continue her amazing record of only victories from the previous rounds. Sailed in breeze with gusts up to 25 knots, the exciting finals ended 3 - 2 in Spanish favour.

- It was a really difficult day, with wind changes and puffs that forced us to always stay close to the other boat to try and control them. Now I'm just so happy, and very proud of my great team. They've done a marvellous job, and I enjoy every day with them, Tamara Echegoyen praises her crew Sofia Toro, Eva Gonzalez, Mariana Lobato and Lara Cacabelos.

Camilla Ulrikkeholm fired off some Danish dynamite this Busan Sunday (9.6.2013)on the second event of the inaugural Women's International Match Racing Series. First defeating Ekaterina Skudina by passing her on the last downwind in their last semi final match, when both boats broached and got their spinnakers through the fore triangles. Ulrikkeholm managed to get the control back quicker, approaching the finish line and leaving the Russian behind with a kite that tore completely into pieces.
Then Ulrikkeholm went into the finals and there she shook up the - until then - unbeatable Echegoyen, beginning with two straight wins in the final matches. The road was then open for a Danish delight, but Tamara & Team wanted something else and fought back:
- I think Camilla & Co had more speed than us, and it was very difficult staying ahead of them. I had to think for myself that everything was still possible, that we had to focus on each race, relax and try to sail the best we could. If we could win all week before, then we could for sure do it again, Echegouyen comments.

- We know that we are strong in big boats and a lot of breeze, and we felt that we had everything to win against the Olympic Champion Tamara, Ulrikkeholm says, explaining why it went wrong in the last three final matches.
- Well, in the first one we got penalized for not finishing a gybe in time, in the second we lost a crew overboard when she wanted to hike a little extra and lost her grip, and in the last match we made a bad start at the leeward mark, and you can't afford such things when racing against Tamara Echegoyen!
- I want to congratulate Tamara and her team. We gave everything we could, but it wasn't enough for gold this time. However, if you ask us tomorrow I think we will be satisfied with our silver medals, Ulrikkeholm laughs.
- We had really amazing matches and a great fight, I liked this week from start to finish. My next event is the 49er European Championships in Århus, Denmark, but I will also have to try and fit a few more match racing events into my schedule, Tamara Echegoyen smiles.
Camilla Ulrikkeholm's next event will be the Danish Open Ladies Cup, sailed June 20 - 23 at her home waters of Skovshoved, Denmark.

In the petit final in Busan, Katie Spithill lost the first match against Ekaterina Skudina, but then managed to get back, defeating the Russian in two thrilling matches, and securing the third place and the World Championship bronze medals to Australia. She was more than satisfied with this accomplishment, as she hasn't been at the helm in match racing for two years:
- It was great to get back out there and remember how it's done. I think I have the match racing bug again now, and I just need to figure out how to finance some more regattas. A big thank you to my crew, who did an awesome job everyday on the water, Spithill says.

Regatta Director Alfredo Ricci was also very pleased with his sixth successful event in Busan, Korea:
- Absolutely, we are extremely happy and very proud to host the ISAF Women's Match Racing World Championship for the first time here in Asia, he says, explaining their way of looking at things.
- Our approach is to always listen to the sailors' feedback, taking care of any possible issue they may come up with. We are already looking forward to next year, being an important part of the Women's International Match Racing Series, he declares.

In the Women's International Match Racing Series' standings after two events in France and in Korea, Tamara Echegoyen is now sharing the top position with Lucy Macgregor, Great Britain and Anna Kjellberg of Sweden. 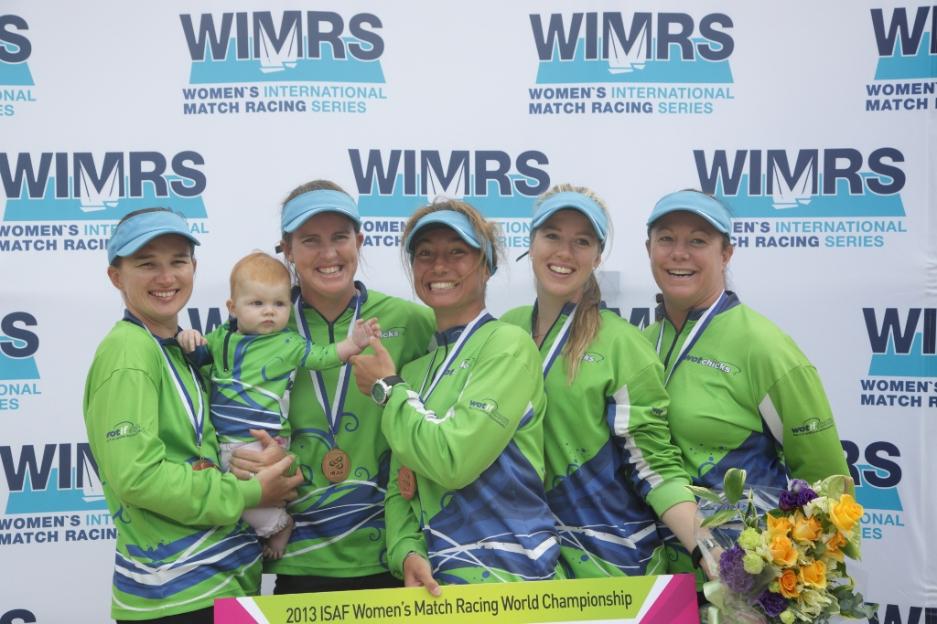