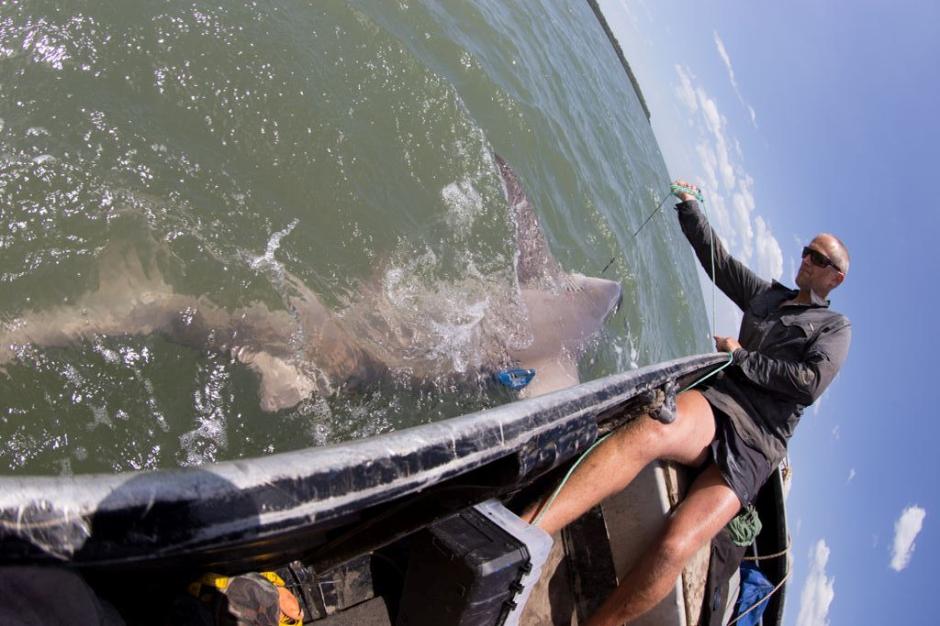 The first ever adult Speartooth Sharks have been caught and satellite tagged by CSIRO scientists working in remote Cape York.

The elusive shark species - listed as critically endangered - was discovered in the Bizant River on the eastern side of Cape York in Queensland in 1982, but up until now only juvenile specimens had been observed.

The two adult specimens captured were well over two metres in length. Before that, the largest recorded Speartooth Shark was only 189cm long.

Very little was known about the Speartooth Shark until research led by CSIRO in 2004 began to obtain a better understanding of the distribution of juveniles in a few river systems in tropical Australia.

"We've been conducting research into the movement and population status of juvenile Speartooth Sharks in the Wenlock River since 2006, and due to our long-term research we now know that juveniles are restricted to a few river systems in the Northern Territory and Queensland," CSIRO researcher Dr Richard Pillans said.

"But the lack of records of adults is a key gap in our understanding of this species, which is listed as Critically Endangered by the Environment Protection and Biodiversity Conservation (EPBC) Act."

According to Dr Pillans (pictured with a tagged shark) the chances of catching the adult specimens were incredibly small.

"We know from catching newborn Speartooth Shark with open umbilical scars in late October – December that the females are giving birth during this period, with preliminary estimates of total female adult population to be less than 500 sharks," he said.

Despite these low odds, over nine days of intensive sampling Dr Pillans, Barry Lyon and Luke Burnett (Australia Zoo) managed to capture two adult Speartooth Sharks - the first records of adults of this species in Australia and the first live specimens recorded by researchers anywhere.

While one of the sharks was a female approximately 2.2m in length, the other individual was a mature male of 2.3m in length, which was somewhat of a surprise and may indicate that the pupping area is also a mating area.

"Both individuals were tagged with satellite tags that will detach after approximately two months and provide information on where the sharks have moved to in this time," Dr Pillans said.

"The tags also collect water temperature and depth which can be used to reconstruct the movement pathways and provide detailed information on the habitat preferences of this species.

"It is hoped that the information obtained from these tags will provide the first data on where adult Speartooth Shark live, with this data critical to obtaining a better understanding of threats to this endangered species.

"We currently have no idea where the adults occur, all we know is that they are found in marine environments somewhere off the northern Australian coast."

The Speartooth Shark is a species of whaler shark and is often confused with bull sharks given their similar colouration and preference for riverine habitats.

The Speartooth Shark is characterised by its dark grey dorsal colouration, a large second dorsal fin and narrow spear-like teeth in the lower jaw which is where it gets its name from.

The Speartooth Shark gives birth to live young with the juveniles thought to be born at the mouths of a few rivers systems in northern Australia.

Once born, the young are completely self-reliant and move upstream where they spend the next three to six years about 40km to 80km from the river mouth in water of reduced salinity.

During the annual monsoon, juveniles move downstream to avoid the influx of freshwater but move back upstream once freshwater flows ease and salinity returns to their preferred range.

This research is funded by research funds from the Ord River Offset program, CSIRO and is in collaboration with Australia Zoo and the Commonwealth Department of Environment.

The speartooth shark (Glyphis glyphis) is an extremely rare species of requiem shark, belonging to the family Carcharhinidae. Only immature specimens, which inhabit the tidal reaches of large tropical rivers in northern Australia and New Guinea, are known. It is exclusively found in fast-moving, highly turbid waters over a wide range of salinities. This robustly built, gray-colored shark is characterized by a short and broad snout, tiny eyes, a relatively large second dorsal fin, and a black blotch beneath each pectoral fin near the tip. Another identifying trait are its teeth, which are large, triangular, and serrated in the upper jaw and narrow, spear-like, and serrated only near the tips in the lower jaw.

The speartooth shark seems to be relatively sluggish in nature, moving with the tides so as to conserve energy. Its activity levels are unaffected by day or night, reflecting the constant darkness of its environment. Small eyes and abundant ampullae of Lorenzini suggest that this shark relies more on electroreception than sight to hunt, while the large second dorsal fin enhances its ability to maneuver at slow speeds in fast currents. It has slender teeth adept for catching bony fishes and crustaceans, mostly on or near the bottom. Known prey include Macrobrachium prawns, Taenoides or Trypauchen burrowing gobies, ariid catfish, the threadfin Polydactylus macrochir, the gudgeon Prionobutis microps, the benthic croaker Nibea squamosa and the bream Nematalosa erebi.

The speartooth shark is not known to pose a danger to humans. Extremely rare like other river sharks, its global population has been estimated to number no more than 2,500 mature individuals, with no more than 250 in any subpopulation. This species is caught incidentally by commercial fisheries using gillnets and longlines, such as the barramundi (Lates calcarifer) gillnet fishery in Queensland (barramundi fisheries in New South Wales have been prohibited from rivers occupied by this species since 2005). Significant numbers are also taken by recreational anglers and bow fishers. Captured sharks might be eaten, used to bait crab pots, or discarded on land. Habitat degradation represents a third threat to the speartooth shark: the Fly River in Papua New Guinea has been severely affected by pollutants from mining activities, while proposed mining and dredging projects in the Port Musgrave area and uranium mining in Kakadu National Park are also of concern.

The range of conservation threats faced by the speartooth shark, coupled with its small population and restricted range and habitat preferences, have led the International Union for Conservation of Nature (IUCN) to assess it as Endangered. Furthermore, in Australia it has been listed as Critically Endangered on the 1999 Commonwealth Environment Protection and Biodiversity Conservation Act, though this is of minimal effect as Commonwealth protection does not apply until a distance of three nautical miles from the coast, likely outside the range of this shark. It has also been listed as Vulnerable on the 2000 Territory Parks and Wildlife Conservation Act, though a management plan has yet to be enacted. Sharks in the Kakadu and Lakefield National Parks are protected somewhat from habitat alteration, if not fishing. 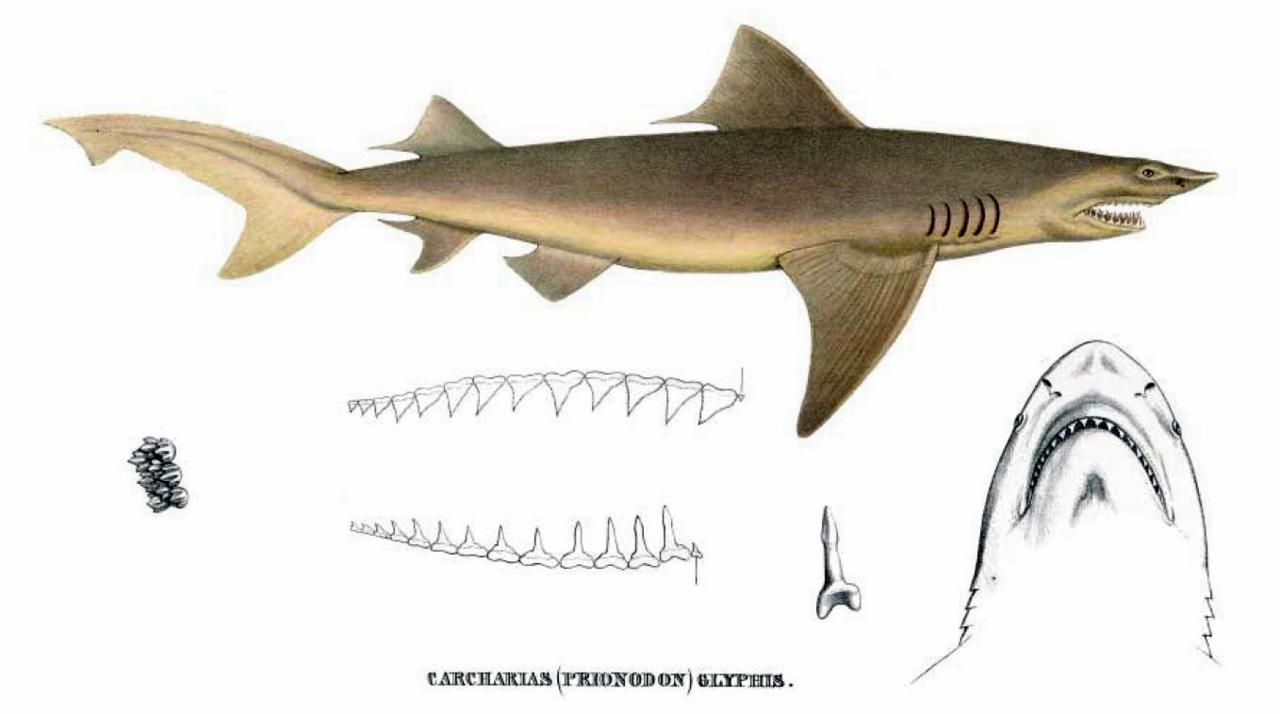 German biologists Johannes Müller and Jakob Henle originally described the speartooth shark as Carcharias (Prionodon) glyphis, in their 1839–41 Systematische Beschreibung der Plagiostomen. They based their account on a stuffed juvenile female 1 m (3.3 ft) long, of unknown origin (possibly the Indian Ocean or the South China Sea). In 1843, Swiss-American zoologist Louis Agassiz proposed the new genus Glyphis for this species and a fossil relative from Britain, G. hastalis. However, the use of Glyphis to encompass the river sharks did not gain wide acceptance until Jack Garrick's 1982 revision of Carcharhinus.

Müller and Henle's type specimen remained the sole known record of the speartooth shark until specimens of the "Bizant river shark" (Glyphis sp. A) were caught in Australia in 1982. Subsequently work by Leonard Compagno, William White, and Peter Last confirmed initial suspicions that "sp. A" was the same species as G. glyphis. Thus, in Australia this shark may also be referred to as the Bizant river shark or the Queensland river shark. 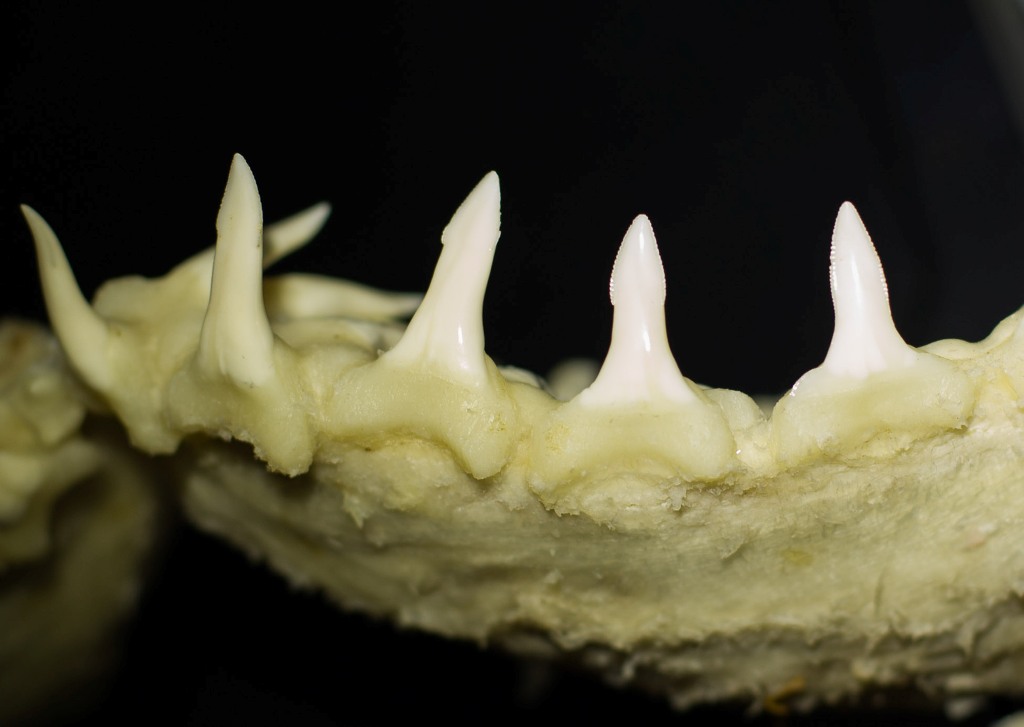 The lower teeth of the Speartooth Shark, which are long, narrow and erect with spear-like tips. The upper teeth are broadly triangular, erect and serrated.© CSIRO, Richard Pillans