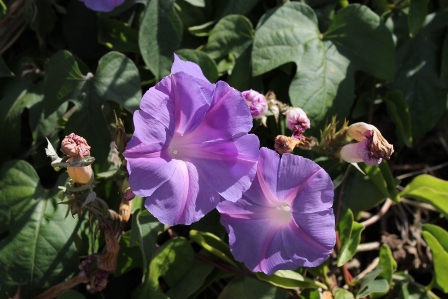 This attractive purple flowering vine that you see everywhere at present is actually a weed. Coastal Morning Glory (Ipomoea cairica) originated in the tropical areas of Africa and Asia although its native range now obscure. A garden escapee spread by seed and locally by spreading stems, it will flower most of the year. Now known as a localised major weed of the coastal regions of NSW and Queensland, especially along creeks. Ipomoea cairica is also naturalised in North and South America, New Zealand, Pacific islands, Taiwan and Japan. Unfortunately vines like this kill off native vegetation by covering their habitat and thus also reduce the range of our native animals and biodiversity in our bush. The best way to get rid of it is to dig out the crowns and roots to prevent regrowth or use a herbicide on larger infestations.

Pittwater Native Flowers of the Week

Above is Slender Rice Flower Pimelea linifolia. This lovely white flower made from many smaller flowers is an Australian shrub called Queen-of-the-bush or  Slender or Flax-leafed Riceflower. It is widespread throughout the south and east of Australia and is known to be toxic to livestock. The bark can be processed into fine strong thread for catching Agrotis infusa, the Bogong moth. This string, called a 'Bushman's bootlace', is produced by a traditional method that involves wetting, drying, beating and rolling the material. Up to 60 white flowers form brachteate heads on glabrous peduncles, bracts are 4 or 8. It was first published in 1793 by James Edward Smith, in his A Specimen of the Botany of New Holland.

Traditional Use; During summer, people came to the high country to feast on thousands of Bogong moths. They caught them in strong, delicate string nets made from Pimelea bark. We know the bark of the Riceflower as 'Bushman's Bootlace', but here's how to make string: Strip the bark, dry it, place in a stream for about one week, dry in sun, soften by chewing/beating with sticks and stones, roll on the thigh and spin into fine, strong thread.

'They had very fine meshes and were manufactured with great care, and being attached to a couple of poles they could be readily folded up when they had to be withdrawn from the crevices.' Helms 1895:594.

Below is Fringed Violet Thysanotus tuberosus, also known as the Common  Fringe-lily, another  perennial herb endemic to Australia. The species name tuberosus refers to the crisp tasting edible root. The leaves are linear in shape, and round at cross section towards the top. They are quite tiny, like warm weather to flower and are more profuse in mid-Summer although they will appear from late September if enough rainfall and warm spells encourage them to bloom. They are a velvet flower that lasts for one day only or even for just a few hours if the sun is too hot and they are not sprouting in a shaded area. These flowers grow in a wide variety of situations, from semi-arid parts of south eastern Australia to coastal areas receiving more than 1300 mm of rain per year. They are often found in open country, heathlands or in dry sclerophyll woodland, especially among the shed needles of coastal she oak trees. 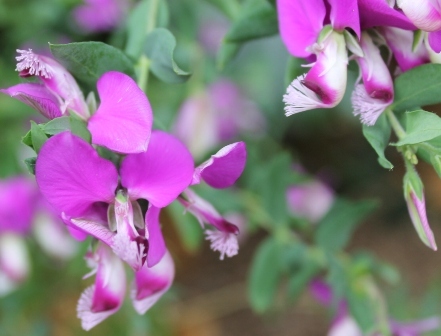 Although this attractive flower looks as though it may be an Australian native pea it originates from South Africa and is a hybrid between two species (P. opposistifolia x P. myrtifolia). Also called Milkwort Polygala x dalmaisiana the flowers are a brilliant purplish pink with two winged petals around a white purple crest. This evergreen shrub flowers almost all year round in Australia and attracts small birds. It grows well in semi-shade and direct sun, and prefers medium levels of water and can be propagated from cuttings. It is recommended that you prune it regularly to prevent it spreading too far or becoming straggly in appearance.

The sweet pea shrub’s similarity to our own peas may indicate the correlation between the continent of Africa and Australia that stems back 200 million years to when we were adjoined to India, South America, southern Africa and Antarctica. For hundreds of millions of years all land of Earth was joined together in one large mass or super continent scientists call Pangaea (meaning ‘all lands’ in Greek). Then about 200 million years ago the land began to drift apart, this is termed ‘continental drift’, and broke into two pieces; scientists called the continent in the north Laurasia and the continent in the south Gondwanaland. Gondwanaland included what we know as Antarctica, which was joined to South America, Africa, India, and Australia. Gondwanaland was named by Eduard Suess, an Austrian geologist and stems from a district in India where the fossil plant Glossopteris was found. Suess stated that because this fossil plant could be found in India, South America, southern Africa, Australia, and Antarctica, then all these lands must once have been joined together. Gondwanaland was a hot and dry place with rainy seasons; the first tree ferns and coniferous trees appeared there.

Pittwater Native Flowers of the Week 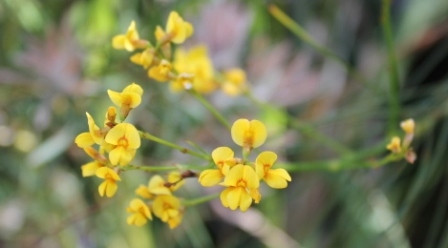 This beautiful and tiny yellow pea is one of those now flowering alongside the southern perimeter of Careel Creek where it has been planted as part of the renegeneration works undertaken there by PNHA and Pittwater Council. This one is called Jacksonia scoparia  - Jacksonia - after George Jackson, (?1780 - 1811), a botanical librarian; and scoparia - brush- or broom-like, referring to the manner of growth. It also known as Dogwood and said to refer to the smell that came from the wood when used for fires. Jacksonia scoparia reaches about 4 m high, flowers in mid-Spring and is a small shade tree loved by the tiny wrens now returning to the creek and the new shrubs and ground cover planted to attract them. It is an attractive small tree or shrub with dark grey furrowed trunk, pendulous branches and long narrow leaves. 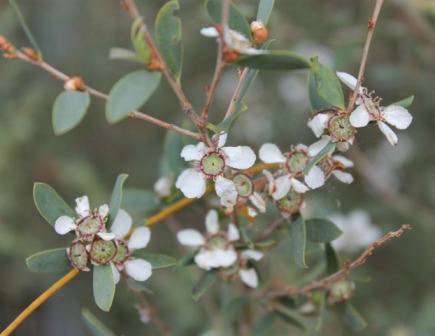 Leptospermum laevigatum, commonly known as the Coastal Tea Tree is a woody shrub or small tree of the myrtaceae family native to eastern Australia. Salt-resistant and very hardy, it is commonly used in amenities plantings and coastal plantings. In Western Australia it has flourished so well as an antidote to landslips from sand-mining it is now known as a weed. Coastal tea tree is a tall shrub or small tree to 5m. It is tolerant of salt spray and has been used as a windbreak or hedging plant and for soil erosion. These beautiful white flowers appear in early Spring and continue through most of Summer.

Pittwater Weed of the Week – Lantana 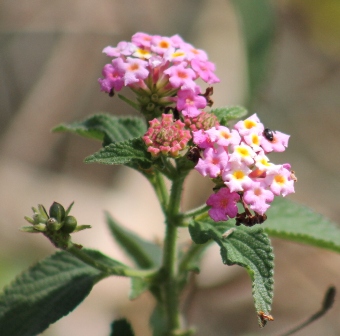 Lantana is a genus of about 150 species of perennial flowering plants in the verbena family, Verbenaceae. They are native to tropical regions of the Americas and Africa but exist as an introduced species and noxious weed in the Australian-Pacific region. In Australia, the plant was shipped here in 1841 and formed part of the Adelaide Botanic Garden. Within a few years it was spotted in Sydney. Lantana has been declared a Weed of National Significance, covering approximately four million hectares of land east of the Great Dividing Range (Source: weeds.org.au).

The genus includes both herbaceous plants and shrubs growing to 0.5–2 m (1.6–6.6 ft) tall. Their common names are shrub verbenas orlantanas. The generic name originated in Late Latin, where it refers to the unrelated Viburnum lantana. Lantana is a lalopathic, releasing chemicals into the surrounding soil to prevent seed germination, notably of the native flora, so that it eventually takes over native bushland.

The spread of lantana is aided by the characteristic of their leaves, which are somewhat poisonous to most animals, while their fruit is a delicacy for many birds which distribute the seeds. Birds like the Superb Fairy-wren in Australia, or the Mauritius Bulbul in the Mascarenes thus unwittingly contribute to the degradation of their home ecosystem. Biological control of introduced lantanas has been attempted, without robust success. In Australia, about 30 insects have been introduced in an attempt to control the spread of lantanas, and this has caused problems of its own. The Lantana Bug(Aconophora compressa) for example is a polyphagous species introduced in 1995 that feeds on dozens of plants, and not only has it failed to have a noticeable impact on the lantana population, it has even become a pest in horticulture, parasitizing the related fiddlewoods (Citharexylum). The Swamp Wallaby (Wallabia bicolor) is one of the few mammals that eat Lantana leaves without apparent ill effect.

Two ways to rid of this noxious weed:

1. Use a spray such as glyphosate. Be sure to follow the directions on the label and please note that once the initial kill is made, you may discover re-growth, especially among mature plants. So before jumping up and down and calling yourself Lantana-free, make sure to do additional applications, particularly on and around any stumps.

2. Cut the plants down. The plants can be slashed or mowed down and then any remaining roots and stumps can be treated with glyphosate to finish the job. Better yet, a backhoe or tiller can be used to completely rip the Lantana out of the ground where it can be piled and removed or used as mulch.

The fluffy blue flower pictured above is an introduced species from tropical America which is becoming one of our localised weeds throughout NSW coastal regions and pasturelands and is signifinicatntly more widespread in northern .  Erect to sprawling herb, 0.3-1m high. Leaves hairy, 2-7cm long and 2-5cm wide while flowers – are 4 – 5 mm across, pale lavender blue to white Inflorescences and occur in fluffy clusters on the end of erect or slightly drooping stems. To rid your garden of this; simply pull ensuring you have root system prior to the shedding of new seeds. This one was photographed alongside a creek in Pittwater.