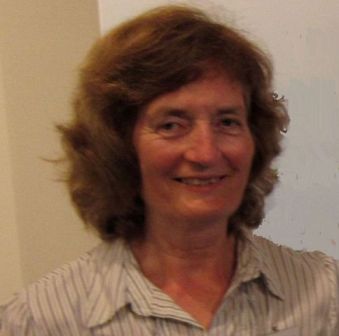 Born a kiwi (a flightless bird), I was quite young when a family friend took me with her on birdwatching expeditions where I learned the fascination of remaining hidden and just observing the behaviour of birds in their natural habitat – going about their lives without interruption from humans.

This experience has been a theme through my life in that whenever circumstances have seemed overwhelming, I can recover my equilibrium by merging myself into the natural environment – for example, by sitting very still on a rock by the seashore listening to the movement of the sea and knowing that there are millions of creatures in the sea going about their daily lives without my needing to intervene in any way. 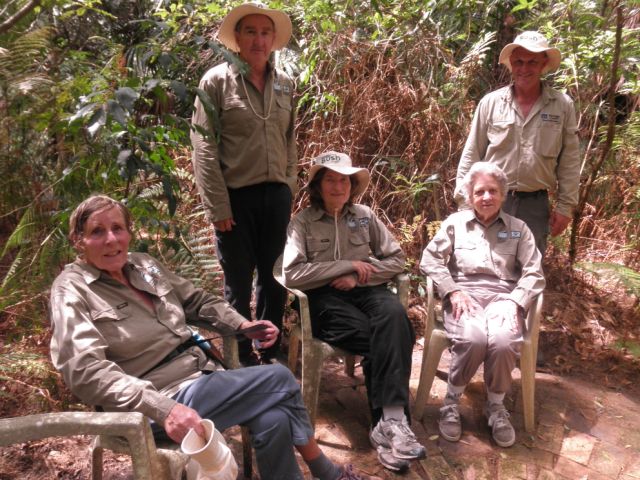 When engaged in bush regeneration, I am sometimes with friends and chatting whilst we work but sometimes I am further away, quietly weeding and listening to insects, birds, reptiles moving about – getting on with their lives.

Although I have no formal education in environmental subjects, when I was teaching at Elanora Heights Primary School, Sally Fisher came to visit. She ran a native plant nursery in the area and wanted to collect seed from the school bushland – in return, she inspired us to see what the school grounds could look like if we undertook bush regeneration and I was hooked! We organised science classes to include topics related to the bush and had children from Kinder to Grade 6 involved in the bush regeneration program. The keen ones also came out with me at lunch times to keep up the effort and the parents pitched in from time to time in weekends.

My role at the school was related to computers and because of that, even though I was technically a 3-day a week casual on the staff, was made “Science and Technology Co-ordinator”. We became involved in the early 90s with a very crude form of email technology called Keylink and through that our students communicated with schools far away about topics such as migratory birds.

Then came the Internet! Late in 1995, I needed to know whether there was any point in a primary school becoming involved in Internet so I went searching (it took 15 minutes for each page to download in those days so my ironing basket was kept empty whilst I waited) – there was nothing much out there at that time so I began canvassing teachers from around the world and “Hey Presto!” gathered up 80 teachers from various countries who were prepared to co-operate in a joint project studying our local rivers and lakes. 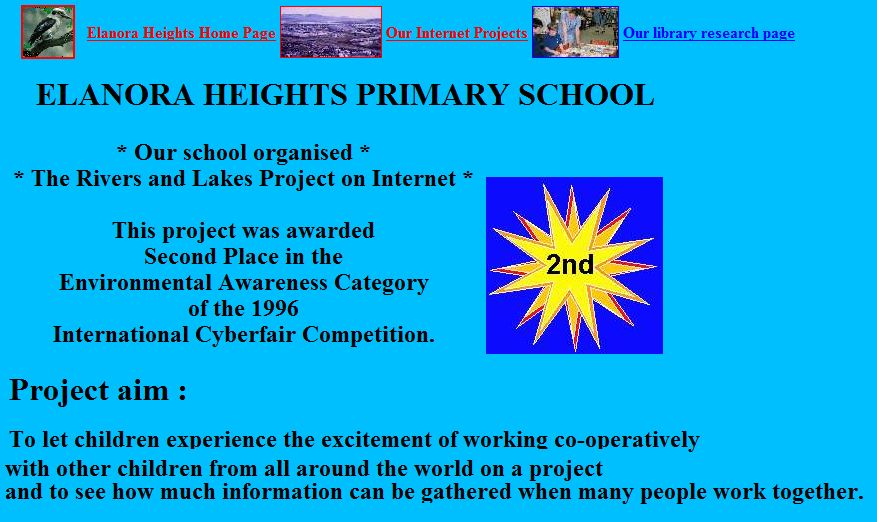 Here comes a confession. At that time, I thought Narrabeen Lagoon was a lake so our students contributed information about “Narrabeen Lake”. I have been doing penance for that since 2005 by promoting the use of the correct name – Narrabeen Lagoon!

Oh dear! We began in January 1996 to see how much information could be gathered by collaborative effort around the planet but by the middle of January were overwhelmed by the quantity and quality and – how could we share this? And how could 450 children in the school become involved when only one computer could access the internet? My son-in-law, Chris, downloaded a tutorial on writing HTML which I needed to learn almost overnight – writing web pages in HTML in a word-processor because at that time there were no such things as web page editors.

By the beginning of the school year in February 1996 our website was operational and all the wonderful information coming in was on display so our own students were inspired to research Hawkesbury River and Narrabeen “Lake”. A German collaborator advised me to enter the website to an international competition being run from California. This was a huge challenge with the narrow information pipe between here and the USA. It took us 36hours of continual effort to get a relatively small website transmitted to the server – the Californian server kept timing out on us because of the slow transmission speeds then available across the Pacific. These days the same process would take less than 15minutes! My son-in-law, Chris, helped me. He and my daughter lived downstairs at our place and had just produced twins. Jenny stored extra breast milk during the day, so Chris and I could feed the twins during the night - there we were feeding one twin each at 3am in the morning whilst clicking away on the computer trying to get all these files through to California. However, it worked! Our school won 2nd prize in the Environmental Category beaten only by a technology high school in the USA.

From 1996 to 1999 our school organised or participated in a range of internet collaborative projects but one of them “Endangered Animals of the World” http://www.tenan.vuurwerk.nl/reports/elanora/ewild.html influenced my subsequent life. Just as we were completing that one, National Parks Association (NPA) put out a plea for members in this area to become involved in protest about threats to the habitat of endangered penguins on North Head and I felt honour bound to put my effort “where my mouth is” and to “Think globally but act locally”.

By the end of 1999, I felt I could not do justice to both environmental activism and the demands of teaching, co-ordinating whole-school Science days, organising internet projects and being computer co-ordinator at the school so I retired. NPA had asked me to organise educational events in the Sydney region and in the process of organising a “Celebration of Biodiversity” event in Beacon Hill, I was told of a piece of land in which NPA had an interest. I investigated – it is in the Wheeler Creek Valley and needed far more bush regeneration than could ever be afforded by NPA so I have been involved since 1999 in a voluntary capacity managing that land with the help of others.

It was obvious in 2001, after we in NPA had conducted, with 50 or more volunteers, a biodiversity survey in the Wheeler Creek Valley, that all those wonderful creatures and plants were dependent for their survival upon the bushland linkages through the Narrabeen Lagoon catchment to Garigal National Park and there began the campaign to seek the protection of those connections. When Dick Persson was appointed as Administrator to Warringah Council we went to see him and he could immediately understand what we were saying. He suggested having a full-scale Seminar and inviting the Minister for the Environment. This took place in 2005. The morning was devoted to discussions of the catchment of Narrabeen Lagoon and the afternoon for sessions on the Lagoon itself (e.g. dredging, flood mitigation, etc)

Several attendees at that seminar gathered together and suggested we form a dedicated group to lobby for protection of the catchment and there was born “Friends of Narrabeen Lagoon Catchment” – initially a sub-committee of NPA but subsequently an incorporated association. The mission is to achieve permanent protection for the remaining bushland in the catchment of Narrabeen Lagoon.

Minister Debus announced at that forum that most of the Crown Land in the catchment would be protected for ever as natural bushland. That land has subsequently been gazetted as Oxford Falls Regional Crown Reserve but FoNLC is lobbying to have the crown land, and other state-owned lands together with the Lagoon itself incorporated into Narrabeen State Park with the primary objective of protecting the natural environment. 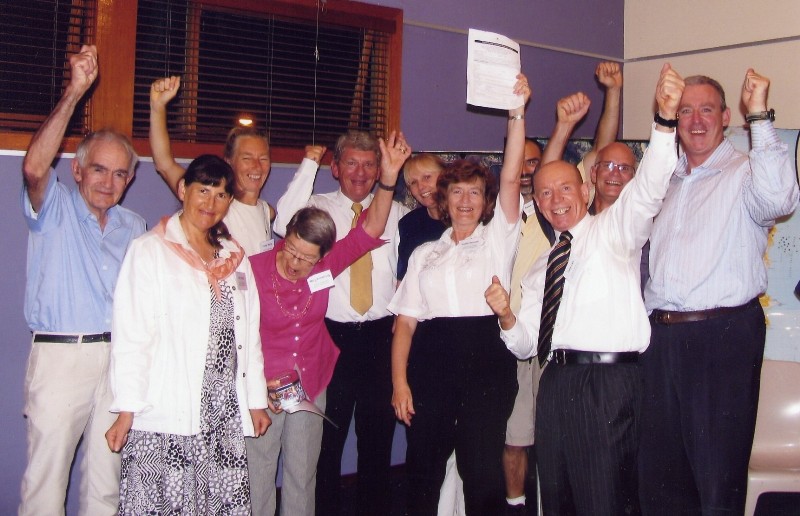 Following this, I worked with both Pittwater and Warringah Councils to apply for (and gain) a $1.9million Urban Sustainability grant for three years of bush regeneration and environmental education within the Narrabeen Lagoon Catchment.

Wheeler Creek Valley is my favourite place in the catchment of Narrabeen Lagoon – together with the resident endangered powerful owls and other creatures – I can work quietly there (unless the Monday motor cyclist is roaring through the bush in Red Hill) listening to the birds and restoring my soul. I have learned a little of the Aboriginal significance of this valley and am conscious of how many thousands of years of living, loving and learning have taken place there. If you walk from Wheeler Creek Valley around towards the Academy of Sport it is possible to gain uninterrupted views of bushland where you can easily envisage a time when Aboriginal people danced on those rock platforms.

You can sit on a rock up there and listen to bush creatures going about their day to day living and, although knowing there is much work to be done to permanently protect this area, you can for a while just “live and let live”.