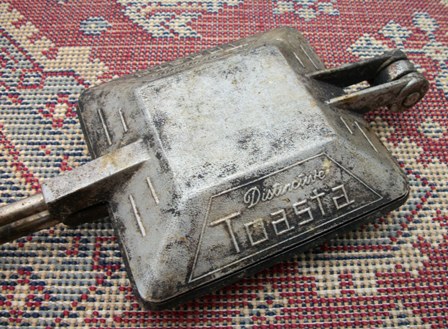 Sunday nights in winter we used to have soup and toast or a range of jaffles, usually cooked in the fireplace in irons made especially for this. These appliances are most commonly used when camping but, in the days when everyone had an open fireplace, they were also popular at home. Their use in Australia will soon reach a hundred years of age.

A sandwich toaster (also known as a toastie maker or jaffle maker in Australia) is designed to be used over hot coals. The original Australian jaffle iron was the same size as a slice of bread from a square loaf, and designed to be used in a fire, on a stove or gas ring. The iron was and still is made in two parts, identical except for the edge where they hooked together. Long handles enabled the two parts to be clamped firmly together, and to be inserted in a fire or stove easily. The jaffle has always been a popular snack here and was developed prior to 1920 as a means to reheat leftover food. Round versions were also made; ‘pie irons’.

The one shown here is termed ‘vintage’. Belgian waffle irons were the predecessors of all these sandwich or pie irons.
History: Medieval origins; The modern waffle has its origins in the wafers—very light thin crisp cakes baked between wafer irons—of the Middle Ages. Wafer irons consisted of two metal plates connected by a hinge, with each plate connected to an arm with a wooden handle. The iron was placed over a fire and flipped to cook both sides of the wafer. The irons were used to produce a variety of different flat, unleavened cakes, usually from a mixture of barley and oats, instead of the white flour used today.
From: Waffle. In Wikipedia, The Free Encyclopedia. from http://en.wikipedia.org/w/index.php?title=Waffle&oldid=455541862
Further;