On the Sundial Lawn at Royal Prince Alfred Yacht Club sits a replica cannon like that jettisoned from Captain Cook’s barque the HMS Endeavour when she was grounded on the Barrier Reef. A smaller cannon placed atop thisworks and is fired to signal the opening of the RPAYC’s Sailing Season.

The Ship ran aground on Endeavour Reef on June 11th 1770. Extracted from Captain Cook’s log (1.)

Monday, 11th. Wind at East-South-East, with which we steer'd along shore North by West at the distance of 3 or 4 Leagues off, having from 14 to 10 and 12 fathoms water. Saw 2 Small Islands in the Offing, which lay in the Latitude of 16 degrees 0 minutes South, and about 6 or 7 Leagues from the Main. At 6 the Northermost land in sight bore North by West 1/2 West, and 2 low, woody Islands,* (* Hope Islands.) which some took to be rocks above Water, bore North 1/2 West. At this time we shortened Sail, and hauld off shore East-North-East and North-East by East, close upon a Wind. My intention was to stretch off all Night as well to avoid the danger we saw ahead as to see if any Islands lay in the Offing, especially as we now begun to draw near the Latitude of those discover'd by Quiros, which some Geographers, for what reason I know not, have thought proper to Tack to this land. Having the advantage of a fine breeze of wind, and a clear Moon light Night in standing off from 6 until near 9 o Clock, we deepned our Water from 14 to 21 fathoms, when all at once we fell into 12, 10 and 8 fathoms. At this time I had everybody at their Stations to put about and come to an Anchor; but in this I was not so fortunate, for meeting again with Deep Water, I thought there could be no danger in standing on.* (* The ship passed just northward of Pickersgill Reef.) Before 10 o'Clock we had 20 and 21 fathoms, and Continued in that depth until a few minutes before 11, when we had 17, and before the Man at the Lead could heave another cast, the Ship Struck and stuck fast. Immediately upon this we took in all our Sails, hoisted out the Boats and Sounded round the Ship, and found that we had got upon the South-East Edge of a reef of Coral Rocks, having in some places round the Ship 3 and 4 fathoms Water, and in other places not quite as many feet, and about a Ship's length from us on the starboard side (the Ship laying with her Head to the North-East) were 8, 10, and 12 fathoms. As soon as the Long boat was out we struck Yards and Topmast, and carried out the Stream Anchor on our Starboard bow, got the Coasting Anchor and Cable into the Boat, and were going to carry it out in the same way; but upon my sounding the 2nd time round the Ship I found the most water a Stern, and therefore had this Anchor carried out upon the Starboard Quarter, and hove upon it a very great Strain; which was to no purpose, the Ship being quite fast, upon which we went to work to lighten her as fast as possible, which seem'd to be the only means we had left to get her off. As we went ashore about the Top of High Water we not only started water, but threw overboard our Guns, Iron and Stone Ballast, Casks, Hoop Staves, Oil Jarrs, decay'd Stores, etc.; many of these last Articles lay in the way at coming at Heavier. All this time the Ship made little or no Water. At 11 a.m., being high Water as we thought, we try'd to heave her off without Success, she not being afloat by a foot or more, notwithstanding by this time we had thrown overboard 40 or 50 Tuns weight. As this was not found sufficient we continued to Lighten her by every method we could think off; as the Tide fell the ship began to make Water as much as two pumps could free: at Noon she lay with 3 or 4 Streakes heel to Starboard; Latitude observed 15 degrees 45 minutes South. 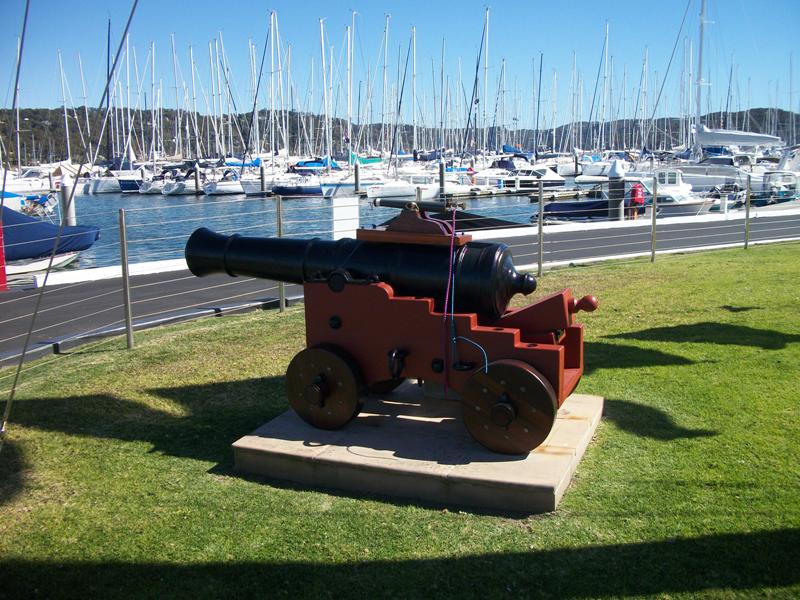 HMS Endeavour, also known as HM Bark Endeavour, was a British Royal Navy research vessel commanded by Lieutenant James Cook on his first voyage of discovery, to Australia and New Zealand from 1769 to 1771. Launched in 1764 as the collier Earl of Pembroke, she was purchased by the Navy in 1768 for a scientific mission to the Pacific Ocean, and to explore the seas for the surmised Terra Australis Incognita or "unknown southern land".

Renamed and commissioned as His Majesty's Bark the Endeavour, she departed Plymouth in August 1768, rounded Cape Horn, and reached Tahiti in time to observe the 1769 transit of Venus across the Sun. She then set sail into the largely uncharted ocean to the south, stopping at the Pacific islands of Huahine, Borabora, and Raiatea to allow Cook to claim them for Great Britain. In September 1769, she anchored off New Zealand, the first European vessel to reach the islands since Abel Tasman's Heemskerck 127 years earlier. In April 1770, Endeavour became the first seagoing vessel to reach the east coast of Australia, when Cook went ashore at what is now known as Botany Bay.

Endeavour then sailed north along the Australian coast. She narrowly avoided disaster after running aground on the Great Barrier Reef, and was beached on the mainland for seven weeks to permit rudimentary repairs to her hull. On 10 October 1770, she limped into port in Batavia (now named Jakarta) in the Dutch East Indies for more substantial repairs, her crew sworn to secrecy about the lands they had discovered. She resumed her westward journey on 26 December, rounded the Cape of Good Hope on 13 March 1771, and reached the English port of Dover on 12 July, having been at sea for nearly three years. 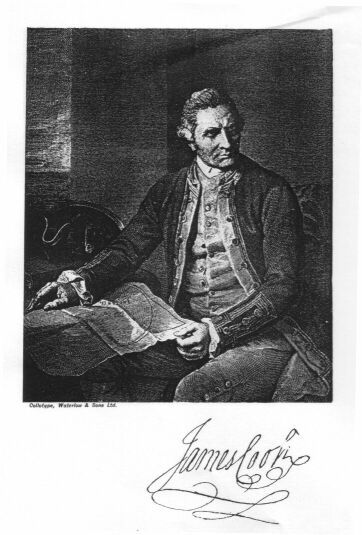 PLATE: PORTRAIT OF CAPTAIN JAMES COOK WITH A FACSIMILE OF HIS SIGNATURE. Collotype, Waterlow & Sons Ltd.

While Cook was feted for his successful voyage, Endeavour was largely forgotten. Within a week of her return to England, she was directed to Woolwich Dockyard for refitting as a naval transport. She then made two routine return voyages to the Falkland Islands, the first to deliver provisions and the second to bring home the British garrison. She was paid off in September 1774, and in March 1775 was sold by the Navy to shipping magnate J. Mather for £645.

Mather renamed the increasingly decrepit ship Lord Sandwich and returned her to sea for at least one commercial voyage to Archangel in Russia. In late 1775, he was asked by the Admiralty to provide one of his ships to transport soldiers to North America to help defeat the colonial militia during the American Revolution. Mather offered to return the ageing Lord Sandwich to military service, but her condition was so poor that she was declared unseaworthy. After extensive repairs the ship was finally accepted as a troop transport in February 1776 and embarked a contingent of Hessian soldiers bound for New York. In December 1776, Lord Sandwich was part of a large fleet of Royal Navy and transport vessels that came from New York in December 1776 to occupy the two largest islands in Rhode Island's Narragansett Bay. These troops originally planned to retake Boston by marching overland, and to capture Providence, the center of Rhode Island's resistance. This plan failed, and until 1779 the British and Hessian occupying troops were centered in Newport. During that time, the Lord Sandwich was used locally around Narragansett Bay and intermittently as a prison ship to hold American sympathizers.

Endeavour's end came in August 1778, when the British occupation of Newport, Rhode Island, was threatened by a fleet carrying French soldiers in support of the Continental Army. The British commander, Captain John Brisbane, determined to protect Newport Harbor by sinking privately owned transports there as a blockade. Between 3 and 6 August, a fleet of 13 transports, including the Lord Sandwich, were scuttled at entrance to the Harbour.

In addition to the search for the remains of the ship herself, there was considerable Australian interest in locating relics of the ship's south Pacific voyage. In 1886, the Working Men's Progress Association of Cooktown sought to recover the six cannons thrown overboard when Endeavour grounded on the Great Barrier Reef. A £300 reward was offered for anyone who could locate and recover the guns, but searches that year and the next were fruitless and the money went unclaimed. Remains of equipment left at Endeavour River were discovered in around 1900, and in 1913 the crew of a merchant steamer erroneously claimed to have recovered an Endeavour cannon from shallow water near the Reef.

In 1937, a small part of Endeavour's keel was gifted to the Australian Government by philanthropist Charles Wakefield in his capacity as President of the Admiral Arthur Phillip Memorial. Australian Prime Minister Joseph Lyons described the section of keel as "intimately associated with the discovery and foundation of Australia".

Another search for the original cannons jettisoned
Searches were resumed for the lost Endeavour Reef cannons, but expeditions in 1966, 1967, and 1968 were unsuccessful. They were finally recovered in 1969 by a research team from the American Academy of Natural Sciences, using a sophisticatedmagnetometer to locate the cannons, a quantity of iron ballast and the abandoned bower anchor. Conservation work on the cannons was undertaken by the Australian National Maritime Museum, after which two of the cannons were displayed at its headquarters in Sydney's Darling Harbour. A third cannon and the bower anchor were displayed at the James Cook Museum in Cooktown, with the remaining three at maritime museums in London, Philadelphia, and the Museum of New Zealand Te Papa Tongarewa in Wellington.

The word barque entered English via French, which in turn came from the Latinbarca by way of Occitan, Spanish or Italian. The Latin barca may stem from Celtic (perThurneysen) or Greek (per Diez). The Oxford English Dictionary considers the latter improbable.
In both Latin and Italian the term barca refers to a small boat, not a full-size ship. French influence in England led to the use in English of both words, although their meanings now are not the same. Well before the 19th century a barge had become interpreted as a small vessel of coastal or inland waters. Somewhat later, a bark became a sailing vessel of a distinctive rig as detailed below. In Britain, by the mid-19th century, the spelling had taken on the French form of barque. Francis Bacon used this form of the word as early as 1605.] Throughout the period of sail, the word was used also as a shortening of the barca-longa of the Mediterranean Sea.

The British Royal Navy used the term bark for a nondescript vessel that did not fit any of its usual categories. Thus, when the British Admiralty purchased a collier for use by James Cook in his journey of exploration, she was registered as HM Bark Endeavour to distinguish her from another Endeavour, a sloop already in service at the time.

The idea of recreating Endeavour for use as a museum ship was generated during the establishment of the Australian National Maritime Museum in the 1980s; the vessel would be funded by the Bond Corporation, and gifted to the nation on completion. A specialist shipyard, complete with viewing platform and guided tours for the public, was set up, and construction of the vessel commenced in 1988. Two years later, work stopped because the Bond Corporation hit financial trouble; a Japanese company, the Yoshiya Corporation, stepped in, but was also forced to withdraw support because of financial problems. (3.)

Volunteers maintained the incomplete vessel until the HM Bark Endeavour Foundation was established as a charitable trust in 1991. The Endeavour replica was launched at the end of 1993, and completed in 1994. After sea trials, the replica sailed from Fremantle to Sydney, where she arrived at the end of 1994. During 1995, the ship recreated Cook's voyage along eastern Australia. She is now housed as a permanent exhibit at the Australian Maritime Museum and touted as one of the world's most accurate maritime reproductions. See more: http://www.anmm.gov.au/site/page.cfm?u=1372 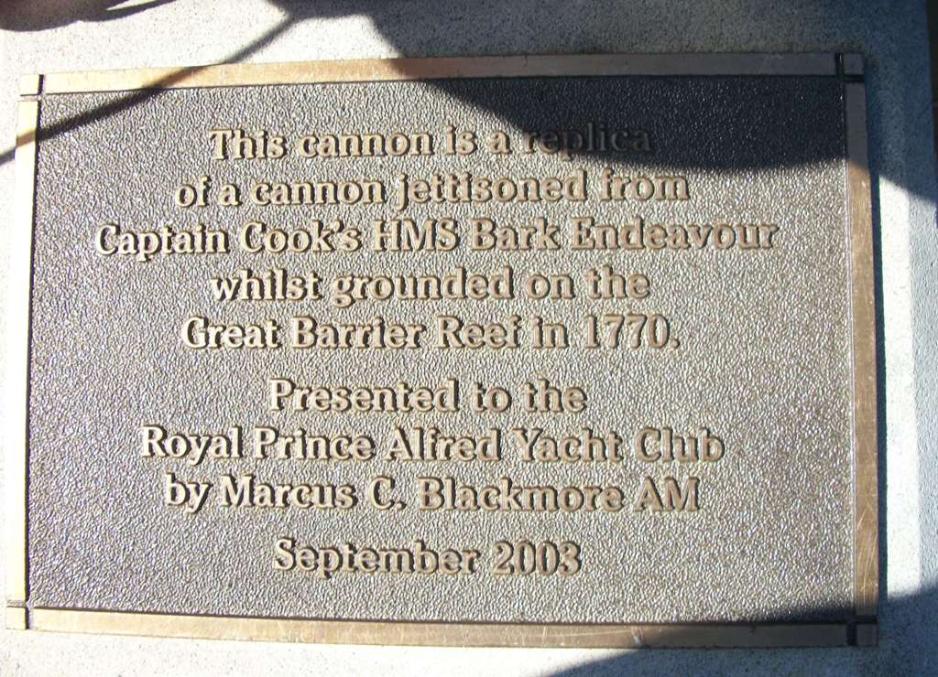