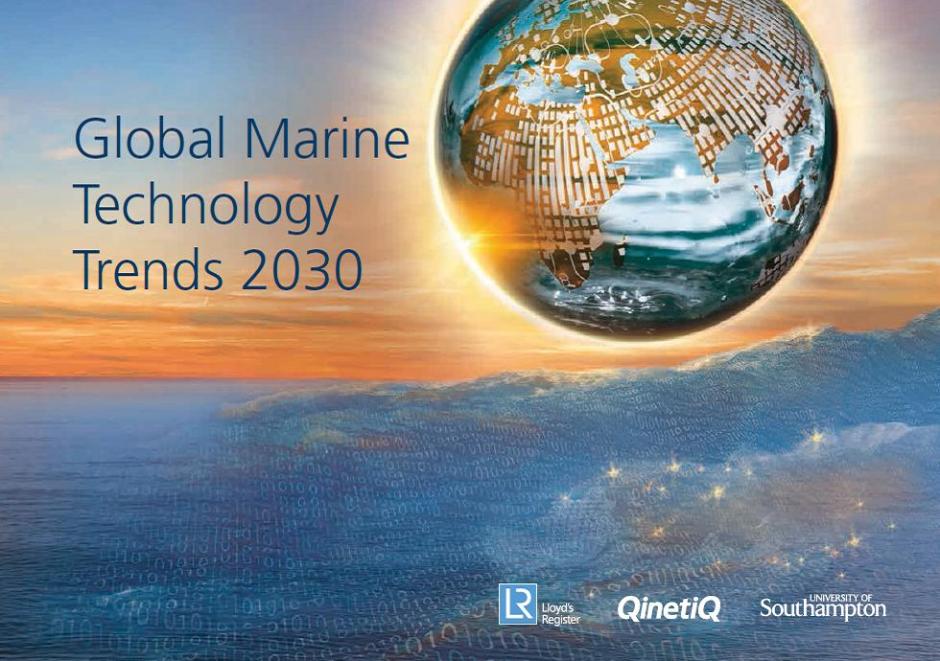 Global Marine Technology Trends 2030 Report Released this Week: Understanding the world’s oceans more essential than ever to secure the future of our planet

September 7, 2015 - A greater understanding and appreciation of our oceans is essential for the wellbeing of the world's population, according to the Global Marine Technology Trends 2030 (GMTT 2030) report launched today (Monday 7 September).

The report is the culmination of a collaborative project between Lloyd's Register, Qinetiq and the University of Southampton looking at the future for: commercial shipping -- without which world trade would cease; for navies -- so vital for security; and the health of the oceans -- addressing the challenges of pollution, climate change and exploitation of resources.

In asking 'what's next' GMTT 2030 is an aid to business, policy makers and society in trying to understand the future for the maritime industries and the oceans.

Leading the 'Ocean Space' section of GMTT 2030, experts from the University's Southampton Marine and Maritime Institute (SMMI) report that since the start of the Industrial Revolution, there has been a 30 per cent increase in ocean acidity and that 25 per cent of atmospheric CO2 is absorbed by the oceans. In addition, some 16 per cent of global protein intake comes from fish with an increasing amount of the world's medicines, materials and energy also derived from the oceans.

By the year 2030, the experts forecast that twice as many offshore structures will exist including 100 times more wind turbines than at present, and that 50 per cent of the world's oil will be produced offshore. They also predict that within the next 15 years, 50 per cent of the global population will live in coastal regions.

To mitigate against these effects and to develop opportunities for the future, they've identified a number of key transformational Ocean Space technologies that will make the biggest impact now and in the future. These include:

• Advanced materials -- rise in the use of ultra-strong materials for ocean structures using embedded sensors to enable remote sensing and support the ability of materials and structure systems to self-repair when damage occurs;

• Big data analytics -- extracting and using complex data from activities such as resource extraction, exploration and environmental protection to influence the way humankind perceives and interacts with the oceans;

• Sustainable energy generation -- offshore energy-generation platforms and algae stations will reduce the consumption of fossil fuels, mitigate pollution and have a minimal carbon footprint, so their impact on the environment will be relatively small. The combined use of these technologies, say experts from the SMMI, will help the world address the effects of climate change, the higher expected frequency and severity of extreme weather, the further reduction of land-based resources and the increasing coastal populations.

Professor Ajit Shenoi, Director of the SMMI, said: "We believe that working together, these technologies can be used to protect the ocean environment from excess exploitation and misuse as we gain a deeper understanding of the impact of human activity on the geology, meteorology and ecology of the ocean space. We can also better protect people living in coastal areas form extreme natural forces such as hurricanes and tsunamis.

"Given the depletion of land-based resources, people will increasingly look to the ocean for food, materials, energy and medicines. In fact, the potential of the ocean to provide these resources is already being realised. It will become necessary to deploy advanced and sustainable technologies to harvest these valuable ocean resources."

Professor Don Nutbeam, Vice-Chancellor of the University of Southampton, said: "This interesting and thought-provoking report provides potential answers to some of the most-pressing global challenges facing society. At Southampton, our world-leading research and education will undoubtedly play a crucial role in developing the emerging technologies required in our future marine world."

Global Marine Technology Trends 2030 is the culmination of a collaborative project between Lloyd’s Register, QinetiQ and the University of Southampton.

The report examines the transformative impact of 18 technologies on ship design, on naval power and on the use of ocean space in 2030.