The Most Fortunate
(An Easter Poem)
There have been many women fortunate —
( Cleopatra, Shcba, Nicolcttel)
Who ran a gamut of full, well-livedyears
Sounding the depths of rapture and regret

There have been women who thro' sinful lives —
(Catherine. Joanna, Pompadour)
Were lapped in luxury; for them the stars
Held always one more, super-gift instore
Even the women cradled by red Mars —
(Boadicca, Joan, the Lakshmi Bai!)
They drew their joy from trumpeting of wars —
They loved and fought — and bad their little day !
But none of them — the richest, loveliest, best —
(Queen become beggar, beggar raised to Queen).
Ever attained the pinnacle of bliss
Which waited the poor, lonely Magdalene.

When on a morning dark she heard a Voice—
('Mary!' it said — and worlds were in that name!)
'Master!' she wept, and knelt then at His feet
Wrapped in a radiance white as candle-'flame.

Edith Mary England was born in Townsville in 1899, and educated in Sydney and at Ipswich Girls’ Grammar School. She married and settled at Boonah. When her first book, The Happy Monarch, was released, in 1927, she had published verse widely in journals, newspapers and magazines throughout Australia. However, many of the poems take the Queensland pastoral environment as their subject matter, and she is one of the first Queensland poets to really come to grips with the unique features of the environment, in poems like Magpies at Sunrise, Queensland Night, Winter Morning, and December in Queensland. Her most popular work is a  second book of poetry,  Queensland Days.

EASTER POEM.
"THE WORLD BY WISDOM KNEW NOT GOD."
ANCIENT men of mighty scroll,
Of wisdom deep and spirits bold;
Have scanned the universal globe;
But they sought where prophets never told,
Essayed to find their Unknown God.
But they sought where saints have never trod.
Oh mind, Augustine! blind to see
Without a kingdom horn in thee,
Dethrone thyself of learned pride,
Kneel at the Cross thy Saviour died.
Secular wisdom, where is thy might?
Canst thou lay inc 'down in sweet repose ,
And awake me in the morning light?
To meet , my Master who arose
I may sleep two nights in silent death,
To breathe my Saviour’s living breath.
V. von Bibra. 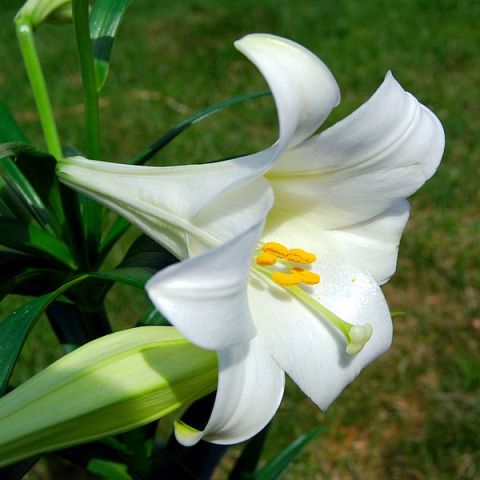 Easter Lilies.
EASTER lilies, pale and tall,
Growing by the garden wall—
Pure and slim, and fair as when
Baby Christ was nearly ten—
Nowise altered, still the same,
Bearing the Madonna's name. .
.Silver censers lifted up;
Dew of heaven in each cup;
Hear them with a tender sound
Hint of mystic things profound—
Are they saints transmuted thus
Singing Easter hymns for us?
LOLA GORNALL.
Easter Lilies. (1929, April 6). The Brisbane Courier (Qld. : 1864 - 1933), p. 24. Retrieved March from http://nla.gov.au/nla.news-article21392818

Lola Gornall (1884-1969) The writer Lola Sydney Gornall was born in Sydney, Australia, on January 24, 1884, to Peter and Alice Hardman Gornall, proprietors of The Suburban Times , Redfern, Sydney. She had one sister, Olive Agnes Gornall Clough. Lola Gornall was a poet and a drama critic, and a member of the Australian Journalists Association. Her poems were published in a variety of periodicals and anthologies, chiefly in Australia and New Zealand, in the early twentieth century.