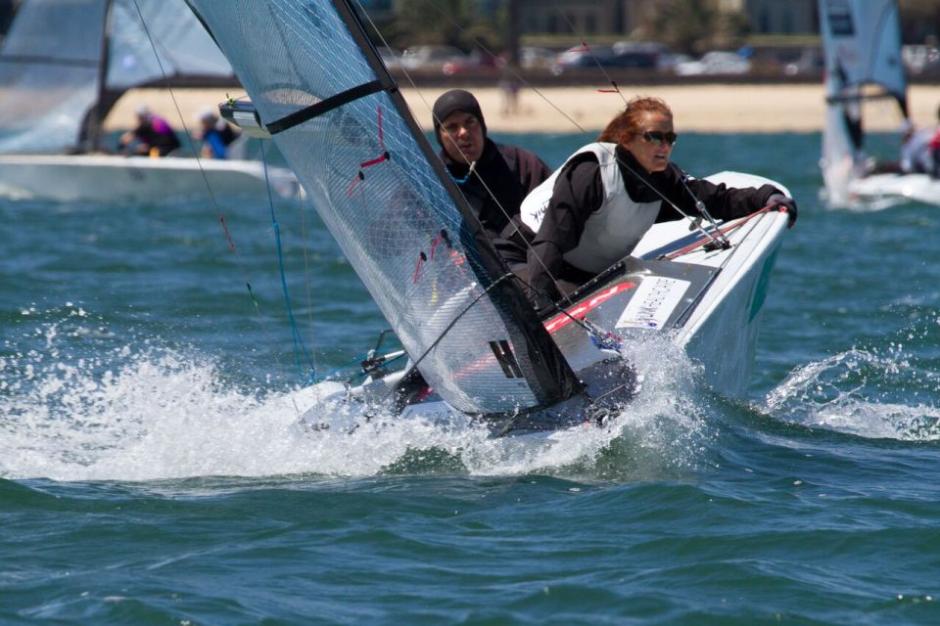 World Championship titles and Rio 2016 Paralympic Games places are at stake with racing taking place out of the Royal Yacht Club of Victoria. A number of Paralympic medallists and World Champions make up the starters in the 2.4mR, SKUD18 and Sonar fleets.

London 2012 Paralympic Games gold medallists Dan Fitzgibbon and Liesl Tesch (AUS) will spearhead the 18-boat SKUD18 fleet in Melbourne and come into the event on an unbeaten run. After a short break following London 2012 the pair were back in the SKUD18 at the 2014 World Championships in Nova Scotia, Canada where they took their first world title together. Since then, the pair have been a mainstay at the top of the podium in the last 12 months winning gold at Sailing World Cup Melbourne and Miami as well as the Delta Lloyd Regatta in Medemblik, the Netherlands.

Sailing on home waters, holding an unbeaten run, the odds look heavily stacked in the Australians favour and Tesch remained confident, "Melbourne is one of our favourite waterways in the world and the event will be another great positive step in our Paralympic preparation. And no pressure on us as the defending World Champions…. well, the big target will be on our back after our Paralympic Gold medal first, then 2014 World Champion and our season so far, so watch this space.

"It's absolutely fantastic to have the Worlds Championships here in Australia and it's quite an honour to have it on beautiful Port Phillip. It will be the chance for Australians to have a look at top level, fantastic racing.

Of the 18-teams in Williamstown, just four remain together following the London 2012 Paralympic Games and that experience could prove vital in Williamstown.
Alexandra Rickham and Niki Birrell (GBR) are the most decorated SKUD18 sailors in the fleet and hold five world titles, 2009, 2010, 2011, 2012 and 2013 as well as London 2012 bronze. In recent times they have played second fiddle to the Australians but in Fitzgibbon and Tesch's backyard, there is no better arena to beat them on the Road to Rio and they will be up for the challenge.
Italy's Marco Gualandris and Marta Zanetti remain together following London 2012 and will be pushing for the podium. Singapore's Jovin Tan and Desiree Lim also retain their partnership and whilst they're capable of a podium finish, Paralympic qualification will be their main focus after they opted out of sailing at the first qualifier.
At the 2014 World Championships Australia, Canada, Great Britain, Italy and the United States of America qualified for the Rio 2016 Paralympic Sailing Competition. As host nation, Brazil are guaranteed a spot on the Rio 2016 meaning that five remaining places are up for grabs at the 2015 Para World Sailing Championships.
Seven nations have headed to Melbourne with expectations of taking one of those five places which will make for an interesting week across the 11 race series.
Paralympic experience from Israel's Zahavi Hagar, New Zealand's Tim Dempsey, and Malaysia's Nurul Amilin Balawi could play key as they sail with new crews for the 2015 Worlds but teams from Spain, Netherlands, Poland and the experienced Singaporeans will ensure a stern test.
The SKUD18 fleet started racing at 13:00 local time on Saturday 28 November and will conclude racing on Thursday 3 December.
About the 2015 Para World Sailing Championships
The Para World Sailing Championships take place out of the Royal Yacht Club of Victoria in Williamstown, Melbourne, Australia from 24 November to 3 December 2015. As the second and final qualification regatta for the Rio 2016 Paralympic Sailing Competition, seven spots in the 2.4mR, five in the SKUD18 and six in the Sonar will be decided in Melbourne. More than 30 countries will be represented with over 200 sailors and coaches registered for the event. The Organising Committee estimates that the event will have an economic impact in the viciny of $7 million for the Victorian and local economies. The Victorian State Government along with Hobson's Bay City Council are supporting the event.
About the Royal Yacht Club of Victoria
The Royal Yacht Club Victoria (RYCV) was initially founded as the Port Phillip Yacht Club in May 1853, and is one of the oldest yacht clubs in Australia. The Club is situated in Williamstown, Victoria just 13 km away from the centre of Melbourne, with a stunning view of the city skyline, and is steeped in decades of yachting history and tradition. Today RYCV boasts more than 900 members and over 300 yachts on the register making it an ideal club for sailors with all levels of experience.
Event website - http://www.foxsportspulse.com/assoc_page.cgi?c=0-10017-0-0-0 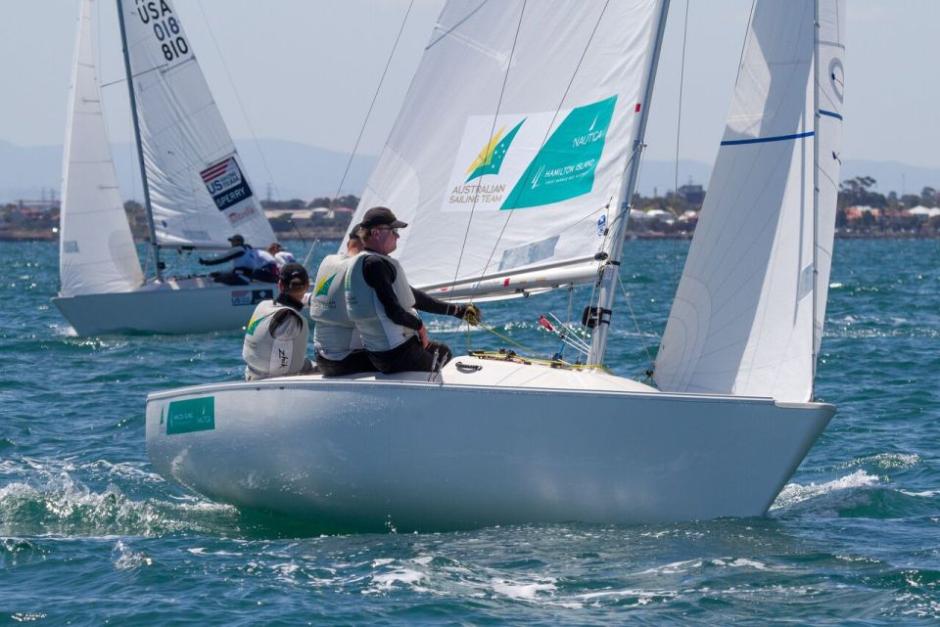 In perfect conditions on Melbourne's Port Phillip, the first two races of the Para World Sailing Championship were run today by the Royal Yacht Club of Victoria in Williamstown, Melbourne, Australia. Winds were steady at around 10 knots and as cloud cover cleared all three course areas were bathed in sunshine.

Great Britain's Megan Pascoe opened up a first day lead in the 2.4mR whilst Australian sailors in the SKUD18 and Sonar top the billing.

In somewhat of a sensation today, one the favourites in the 2.4mR fleet, Great Britain's Helena Lucas, received a "U” flag disqualification in the first race and has a lot of work to do to work her way back up the leader board.  After two attempts to get the fleet away, the race committee used the "U” flag to try to get a clean start.  Even under threat of disqualification for an early start, three sailors still took them on and paid the price.  Joining Lucas on the sidelines were New Zealand's Paul Francis and Australia's Neil Patterson.

The leading group worked the left side of the course on the first leg, and having established themselves at the head of the fleet, did their best to consolidate their places on the remaining legs, but even within the lead group there were some major changes of position, particularly during mark roundings, where the action was every bit as cut-throat as it was in yesterday's practice race.

Lucas' team mate Megan Pascoe took responsibility for Great Britain however, starting well in both races to finish the day with a third in race one and a first in race two, to head the leader board in company with German champion Heiko Kroeger, who scored two seconds for the day, sailing with great consistency throughout.

Damien Seguin of France has seven points, along with Norway's Bjoernar Erikstad.  These four were prominent in both races today and deserve their position on the leader board.  Australian Matt Bugg struggled, placing ninth in the opening race and eighth in the second. His team mate Peter Thompson excelled in the second race, picking the shifts well to finish fourth, but with a 29th place in race one, he is well back from the leaders.

Others featuring at various stages, and still prominent on the leader board, are Austrian Sven Reiger, German Lasse Kloetzing, who lies one point behind Matt Bugg on 18 and Czech Republic sailor Daniel Bina a further point back.

Conditions were perfect for the SKUD18's.  Australia's Dan Fitzgibbon and Liesl Tesch began with a second place in the first race, but were dominant in race two with a good win. Their main competition will continue to come from the British pair of Alexandra Rickham and Niki Birrell who trail them with a second and third to their credit and Poland's Monica Gibes and Piotr Cichocki, who posted and eighth in the second race after winning the first.

In race two, the Australians rounded the first mark with a small but decisive lead, but sailing fast and deep under spinnaker, doubled their lead when they reached the gate and went on from there to a very comfortable win.

After racing Fitzgibbon said, "The first day of World Champs for us and we are trying to settle in to a long week ahead. It's just the first day and the first race was a bit on the light side and a bit choppy and we came away with a second, which was good to settle in.

"In the second race we got a bit more wind, 12-15 knots and we got away with a win in that one, which was good. We extended on the fleet and for the first day, we're pretty happy with where we are.”

The Australian Sonar crew of Colin Harrison, Jonathan Harris and Russell Boaden had to fight hard for their two wins today.

At the top mark in race two, Canada's crew of Paul Tingley, Logan Campbell and Scott Lutes led narrowly, ahead of the Australians and Britain's John Robertson, Hannah Stodel and Steve Thomas.  Once again however, Harrison was able to finesse his way to the lead on the downwind leg and from there was never headed.

After two races, the Australian team leads the way with two wins. They are followed by New Zealand's Richard Dodson, Chris Sharp and Andrew May who recorded a fifth and a second and the Israeli team of Dror Cohen, Arnon Efrati and Shimon Ben Yakov a point further back.

Scores are quite close in this fleet and give the promise of some great competition during the remainder of the regatta.

Racing is scheduled to resume at 13:00 on Sunday 29 November out of the Royal Yacht Club of Victoria in Williamstown, Melbourne, Australia.

In the 2.4mR Tasmanian Matt Bugg sits in overall sixth place after posting a ninth and eighth.

“It’s great to have everyone here and for others to see Australia, to come down here and sail with us and enjoy what we enjoy, how good Australia is and show it off a little bit. I think everyone is enjoying it and having a great time.” 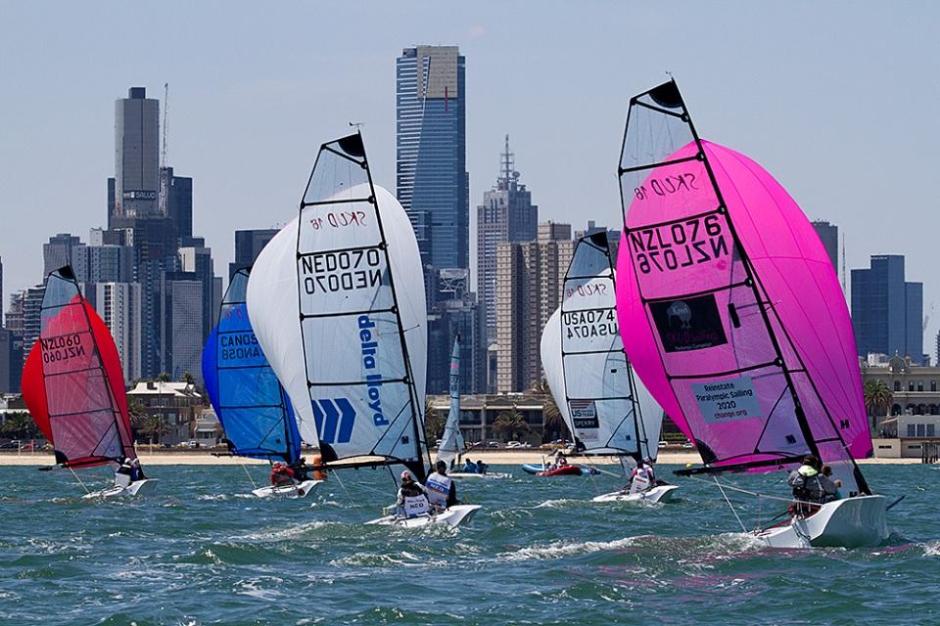