New developments planned for the Northern Beaches promise vibrant, busy communities. But in many cases the downside to this is fragmentation of bushland and loss of habitat for our native fauna. Pittwater Natural Heritage Association, Northern Beaches Roadkill Prevention Committee and Katandra Bushland Sanctuary Trust are campaigning to connect threatened bushland reserves in the Pittwater area in a bid to help stop the decline of our native fauna.

Currently there are two major developments planned for the Pittwater area. One is the Ingleside land release which will turn a semi-rural locality into a residential suburb and the other is the planned upgrade of Mona Vale Road from two lanes to four.

The Ingleside Land Release could change the nature of over six hundred hectares of land situated to the west of Mona Vale.

This could mean that houses and roads will predominate over significantly reduced native bushland.

Therefore the ability of native wildlife to filter through the existing low density suburb to and from the bushland reserves on the Warriewood escarpment will be severely compromised.

In addition, the upgrade of Mona Vale Road from two to four lanes could create an impermeable barrier to wildlife trying to move between a number of reserves and patches of bushland around Ingleside and Warriewood.

These two developments together create a serious threat of fragmentation and isolation of native fauna habitat that has to be addressed before they go ahead.

The survival of many fauna species is at stake.

Many native species are already fighting for survival as they try to cross our busy roads.

Motorists on Mona Vale Road and other roads in our area often see dead wallabies on the side of the road. Wallabies are known as an indicator species, meaning that for every dead wallaby there are many other species killed by motor vehicles that you don’t notice: echidnas, lizards, turtles, antechinus to name just a few. These small animals are not easily seen from a moving vehicle or are carried away by carrion eaters such as crows.

However, increasingly around the world, planners are taking notice of the environmental effects of their actions and are including wildlife corridors and fauna crossings in their land use planning.

The Queensland Department of Transport and Main Roads publication Fauna Sensitive Road Design Manual acknowledges the negative effects of roads on the survival of wildlife populations and sets out measures to ameliorate them.

Roads and Maritime Services NSW is building wildlife crossings on some of its highway upgrades. In 2011 RMS commissioned a study of roadkill on the Northern Beaches by SMEC Australia which identified a number of roadkill “hotspots” on Mona Vale Road and recommended that measures such as fauna crossing structures be considered when upgrading roads.

Many types of fauna crossing structures can be used to reduce fauna fatalities on roads. The main types used in Australia are canopy bridges (ropes strung between poles for arboreal species), vertical poles that allow gliders to cross above roads, culverts allowing fauna to pass under roads and vegetated land bridges which allow the widest range of native species to safely cross roads above the traffic. 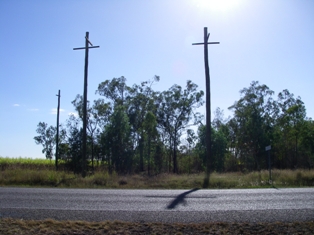 Pittwater Natural Heritage Association, Northern Beaches Roadkill Prevention Committee and Katandra Bushland Sanctuary Trust, assisted by other environmental and wildlife groups are campaigning for wildlife corridors and fauna crossings to connect the remaining bushland in the area around Warriewood, Ingleside and Terrey Hills. We have a regional vision of connecting Katandra, Ingleside Chase Reserve, Garigal National Park and Ku-ringgai Chase National Park so that native fauna can roam freely between them to breed, find food and, when necessary, escape from bushfire.

There are many steps on the path to achieve our regional vision. The first step was completed when, with the assistance of Pittwater Council, agreement was reached for some private land on the Warriewood escarpment to be added to Ingleside Chase Reserve.

Right: Regional connectivity: the reserves shown in green must be connected by corridors and fauna crossings

We are now talking to the Department of Roads and Maritime Services about construction of a fauna bridge across the upgraded Mona Vale Road. There is also the issue of fauna corridors through Ingleside to be negotiated. Both RMS and the Ingleside planners say they will take the needs of native fauna into account. But will they do enough?

We will keep campaigning to ensure that they do.