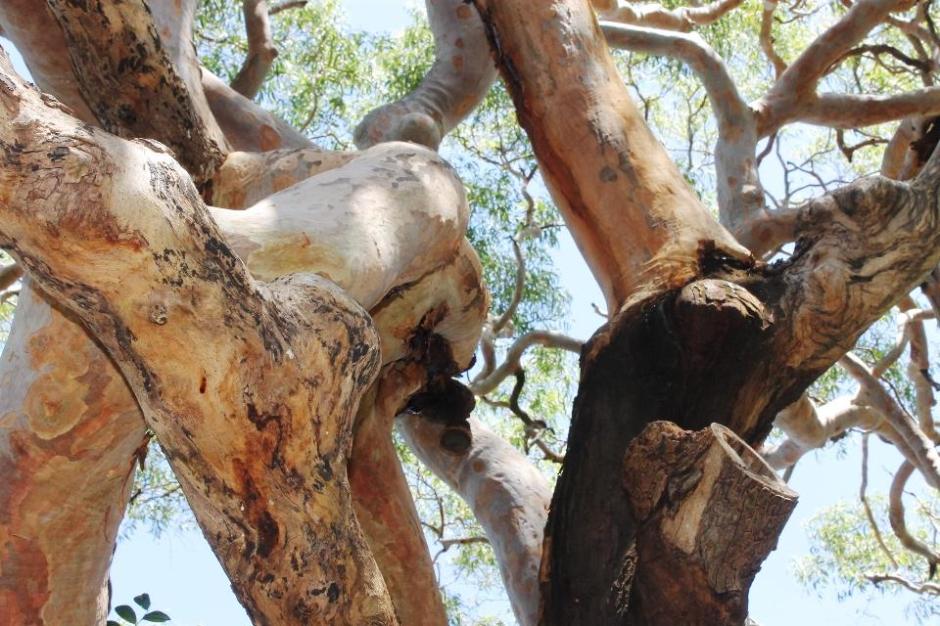 THE OLD GUM TREE.
By E. Cole.
Royally silent is a world of song,
Against the sunrise towered the great tree.
Magpies were fluting their loud melody.
Clear bellbird, striking each his crystal gong.
Chimed where the chiming river gleamed along,
And thrushes poured out bubbling ecstasy;
But the proud tree soared mute, content to be.
Or was it human haste that did it wrong?
Then, like a learning child, I slowly spelt
The bright sound—symbols on its boughs afloat,
The life praise of the strong; and down I knelt,
Beneath that gush of leafy note on note.
And leaned my cheek against the trunk,
and felt
The thrilled vibrations of a singing throat.
THE OLD GUM TREE. (1925, May 30). The Australasian(Melbourne, Vic. : 1864 - 1946), p. 59. Retrieved from http://nla.gov.au/nla.news-article140713301

A RHYME OF GUM TREES.
Bronze-green, bronze-gold, the eucalypts stretch out to the horizon.
The reticent tall children of a frank and subtle land.
The hundred-named, the million-formed
"monotonous" men call them,
The gum trees that some artists and all lovers understand.

For 'Corot's ghost is often here, and living men come also
To paint them In the sunbeams shower; no trees so glance with light;
Or ranged upon hillside like the-columns of  a temple,
Or tossing wild funereal plumes against the coming night.

The gum trees sleep so lightly that f o faintest breeze will wake them,
For I have seen them etched in black on skies of apple-green
Till feather-soft the dawnwind ran among their carven branches,
The sun uprose; and feather-light they danced in golden sheen.

They never were like other trees, and all their subtle changes
Of flower and leaf, and all their moods of gaiety or pride
Or cynical reserve, will go unknown save to their lovers,
But It will not fret the gum trees It their beauty Is decried.
Sharp wafts of Scent are blown to me; from here to the horizon.
The secret forest reaches out, as restless as the sea,
With foam of blossom here and there; and every tree within It
Is pungent with the savour of Its own Identity.
DOROTHEA MACKELLAR
A RHYME OF GUM TREES. (1925, March 21). The Sydney Morning Herald (NSW : 1842 - 1954), p. 13. Retrieved fromhttp://nla.gov.au/nla.news-article16197033

The Gum Tree
By "Den"
By the side of the track the gnarled old gum
Lifts strong arms to the sky;
He marks the rare bush toilers come,
And the tourists trooping by.
So has he stood thro' many a year
And watched them come and go;
They change, says he, who pass by here,
Yet forms are straight and eyes are clear,
As in the long ago.

From bullock drays to motor cars,
From gloom to lights that shame the stars,
Change comes indeed; from garb they wore,
From moleskin pants to the wide plus four,
From tall bush wives of sterling grit,
To laughing girls in riding kit;
An outward change, says the old gum tree,
But the race seems much the same to me.

By the side of the back the old gum stands,
Last of his giant race,
Who saw these men from distant lands
Change all a country's face.
From his mountain side where the old gum grows
He has watched the fathers press
Who came not back; but well he knows
Today's strong men are sons of those
Who tamed the wilderness.
The Gum Tree. (1931, August 22). Advertiser and Register(Adelaide, SA : 1931), p. 5. Retrieved from http://nla.gov.au/nla.news-article35680241

And you, oh gaunt gum tree,
"Why white?" Why white?"
'The ghosts of all the bush passed creepingly,
One night, one night."

And you, oh blue gum tree,
"Why are you blue?"
The far, sweet seas thrill every leaf of me
Till I grow blue." 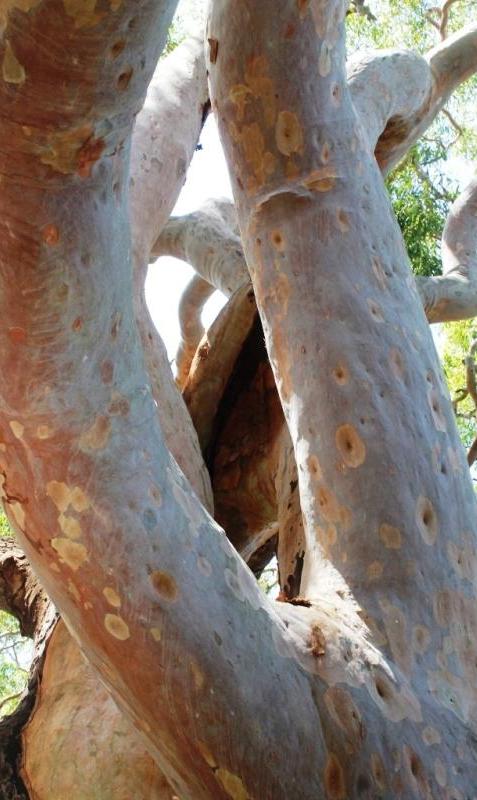 ONLY A GUM TREE.
Only a gum tree, gaunt and bare,
But what memories centre there,
Of days long left behind;
Associations rush to the mind,
When that tree was the winning post
Of many a race won and lost ;
Where the Squire of Wilton Vale
Was the judge who told the tale
Of who lost, and who was winner,
To many a weary, and who was winner,
Whilst the sturdy Laird of Mayfield
Was wont the starter's flag to wield.
And he aye kept strict order,
And ne'er allowed the nags o'er the border.
There some great horses started,
Chief of which, Walkover, long departed;
And Smith's Bonny Black Bess,
Who found Noble's Tommy only a little less ;
Of dead heats they ran two,
Each trying their best to do,
And hen a third was run,
Which, by a nose, Black Bess won.
Now, old tree, thy doom, sad and cruel,
To be burnt and used for fuel ;
But in thy death still glorious,
As, useful, you are still victorious.
Living, thou were bonny and rare ;
Dead, no fuel with you can compare.
Childhood's years hover round you,
Youthful pleasures like early dew ;
The pride of manhood's maturer years,
With all its hopes and fears.
Ageing as stern time passes bye,
I can still see you in mind's eye,
Ever loved and ever dear landmark,
In daylight or when dark.
Where oft the peaock's shrill cry,
Rung out beneath the starry sky.
Now, alas ! thou are for ever gone,
And left us sad and alone.
But how like life you seem —
First a signal, then a dream.
Fare thee well, my old friend,
May we all be as useful to the end ;Fix this text
Living, thou wert ever good,
Dead, useful still as wood.
— MERNDA.
ONLY A GUM TREE. (1916, December 1). Evelyn Observer and Bourke East Record (Vic. : 1902 - 1917), p. 2 Edition: MORNING.. Retrieved from http://nla.gov.au/nla.news-article60665899

ONLY A GUM TREE.
(BY MERNDA.)
Just recently Mrs A. Thomas, of Mayfield, has had cut down probably the most noted tree in our district, the memories of which surrounding it are many and of a period dating far back in the history of the district. The tree was an ordinary red gum tree, well-shaped and symmetrical until of late years, when it began to gradually die away, hence the reason for it being cut down. My first memory of the tree was when only a boy. I sat under its shade when the late Patrick Nelson, father of the late Mrs Ryan,(mother of our Shire Secretary), the late ex-Cr. Nelson and Mr Patrick Nelson, the well-known farmer, of Doreen, lived in the Marsh farm, then the property of Mr Winter. My father having purchased the Marsh farm was on his way to inform Mr Nelson of his having done so, and he left me sitting under the tree, a little way off from the house.
Later on some stirring meetings were held under the tree about the Glue-pots on the Plenty road, and about the year 1857 races were held at Bridge Inn, which was on the opposite side of the Plenty road. The race-course was right round the hill on which the Mayfield homestead now stands, starting and winning at the tree. Many stern and tough races were fought out on that course, a notable competitor being the late John Abbott, who then lived at Donnybrook. It was here that equine wonder, the steeplchaser, Walkover, won his first race, being very hard pushed by Mr John Wood Fleming's steeplechaser. I think Walkover was purchased out of the Morang pound for a trifling sum, about £4, and yet he put up a record that, as far, has not been beaten, winning in Melbourne with 13st 13lbs on his back. Other races from time to time were run, the most notable being that between Mr James Smith, the builder and owner at the time of the Rose, Thistle, and Shamrock Hotel, Plenty road, who owned a black mare by name Black Bess, and Mr Noble's black horse Tommy, Mr Noble being the head-teacher of what is now S.S.488, Merada, a good and capable teacher, but a little heavy with the cane, a taste of which I had once or twice. Well, the two nags, after running two dead heats, ran a third heat, which Black Bess won by a nose. Many other keen races were competed for at the "Old Gum Tree," and picnics and foot races as well. Among many winners I can remember the late Wm. Fleming, of Coburg, John Pratt, the miller, at Mayfield, and your humble servant, "Mernda."
In those days the greasy-tailed-pig was always a feature in the competitions, the pig being mostly won by the late John Thomas, of Separation, Merada. The tree stood in front of the store of the late Moses Thomas, and was also used as apost to put the target on for shooting matches. For some years Mr Thomas’s family owned a peacock that always  roosted high up in the tree, and his peculiar cry often rang out in the night air. You can easily understand, Mr Editor, how memory clings to such a land mark ; it is not often given to one in a period extending over 60 years to see a link with the past after so many years disappear. Such is what time brings about, but all the same it leaves its memories. Many races were won by the Beale family on the racecourse, Mr Adam Beale and his brother, Young Beale, both riding and winning there. The late ex Cr Lindsay Beale  was a regular attender, also Mr Patrick Nelson, of Doreen, Mr John Grierson,of Preston, and, I think, Cr Reid has sometimes been there, and after all, although a new order of things has arisen, more distant, more formal, it is true, it would not hurt for a little of the old-time neighbourly feeling and genuine good-heartedness to be grafted on to the new order now and then. We meet samples of the old times, but they are getting rarer and rarer. One of the few left that I know of, is Mrs Stewart, of Arthur's Creek.
The late Mrs Ryan was another example, and many others, as showing the comrade-ship that existed in those days. The late Mr John Wilton, J.P., of Wilton Vale, noted as the judge at all the races, and a stern, upright judge he made. The late Mr Moses Thomas, of Mayfield, always wielded the starter's flag, and he was equally strict and impartial in the performance of his duties. How few of those who took part in those days are left; they are like the lamented old gum tree, departed and gone. Peace to their memories. May we all die as useful and good ends as most of them did, beloved and respected by all, is my earnest wish and prayer.
"Tempos fugit" is well exemplified as a Latin saying in the life and death of the old gum tree, which must have had its origin more than a century ago, thus being a warning to us all to note how time flies. ONLY A GUM TREE. (1916, November 24). Evelyn Observer and Bourke East Record (Vic. : 1902 - 1917), p. 3 Edition: MORNING.. Retrieved from http://nla.gov.au/nla.news-article60665827 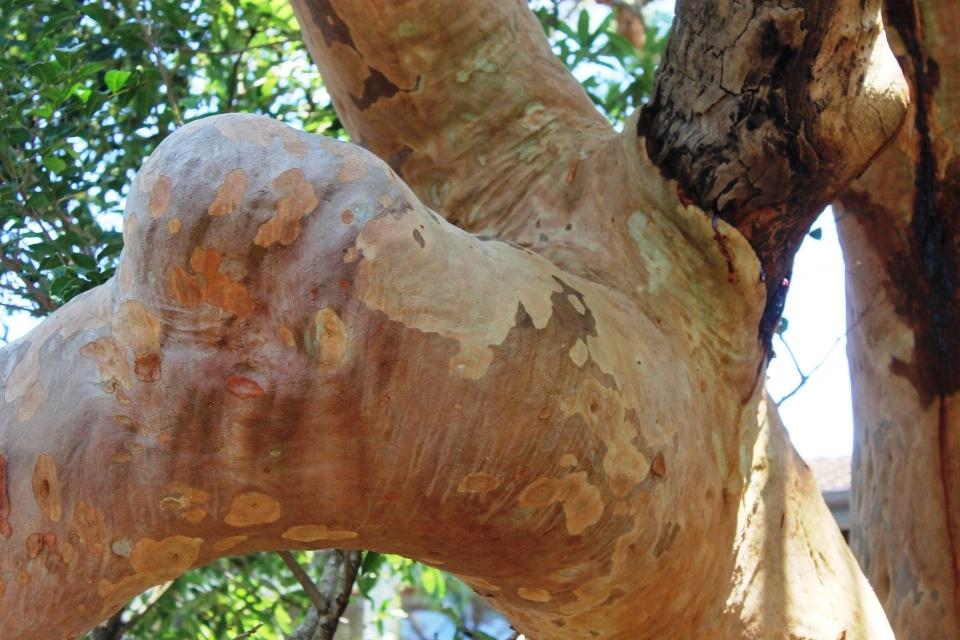 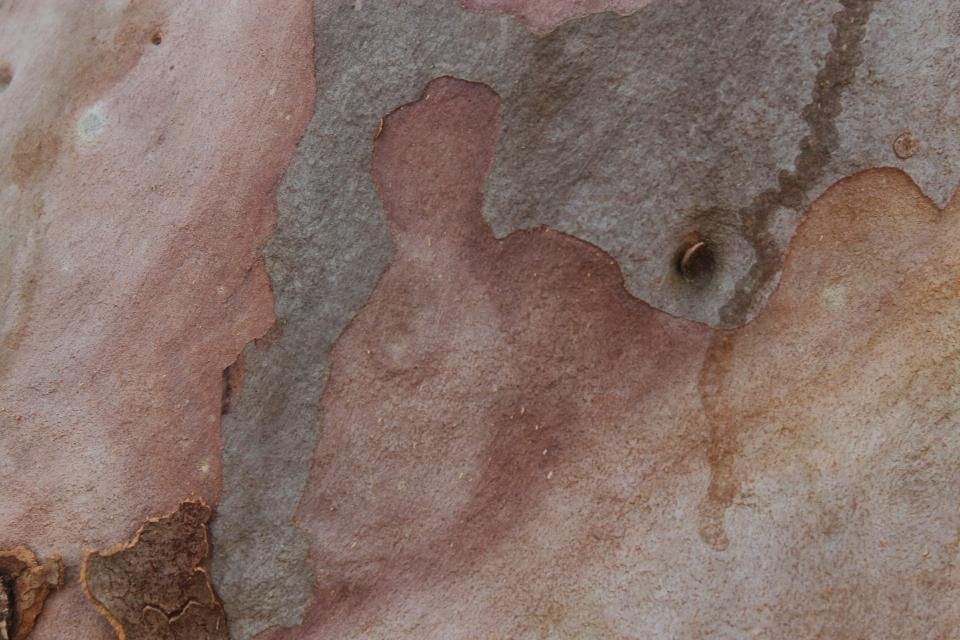