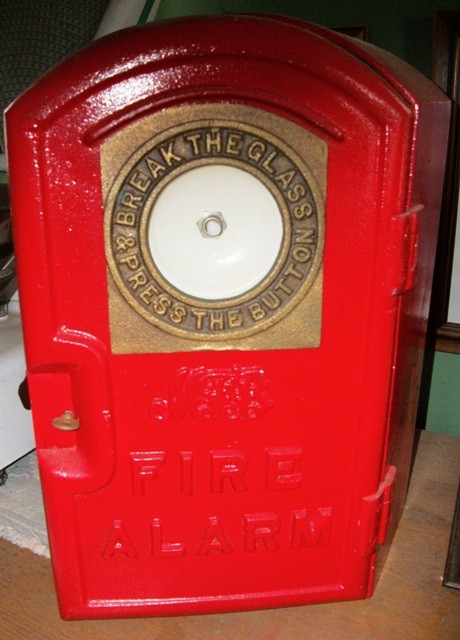 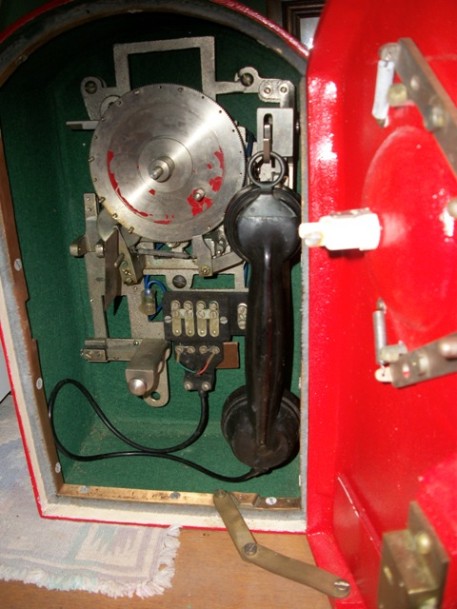 Outside cases of alarm boxes were made of cast iron until 1928. Thereafter they were made mostly of cast aluminum. This one, from the 1890’s (and Trevor's Museum), has a telephone (No. 97 or 99) installed, which the person reporting the fire would use to nominate its location. They were painted red originally to distinguish them from blue police call boxes and placed in public buildings such as hospitals and schools as well as on highways, corners or crossroads.

A fire alarm box was an outdoor device used for notifying a fire department of a fire. Early boxes used the telegraph system and were the means of calling the fire department to a neighborhood in the days before people had telephones. When the box is triggered, a spring-loaded wheel spins and taps out a signal onto the fire alarm telegraph wire, indicating the box number. The receiver at a fire station then can match the number to the neighborhood.

The idea was first were developed by Dr. William Channing and Moses Farmer in Boston, MA, 1852 using the telegraph system to pinpoint the location of and communicate a fire alarm. They apteneted their “Electromagnetic Fire Alarm Telegraph for Cities”.

By the 1920’s further improvements on design required the user to break the glass, turn the key and open the door, then pull down hook inside to transmit the alarm to a central alarm office where the box number was tapped out on a bell, flashed a red signal light, and punched out its number on a paper tape register much like a stock ticker. There was also a telegraph key and sounder inside each box, which the fire chief, or chief’s driver could use to order a greater alarm or all-out fire signal to the central alarm office.

Decommissioned fire alarm boxes have become an item which people collect. Some are collected as-is for their historical significance, while others are used for decoration. Entire boxes or parts may be found on online auction websites. The most comprehensive book published on Fire Alarm boxes is FIRE ALARM! by Paul Ditzel, 1990 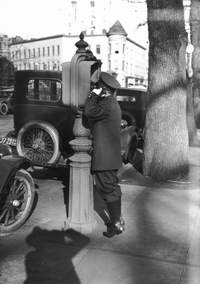