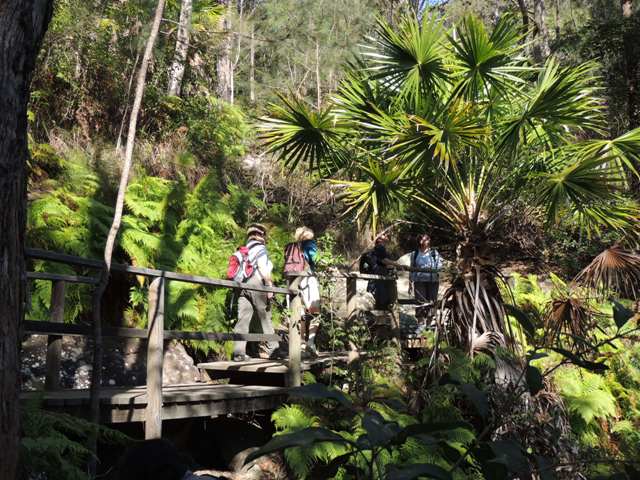 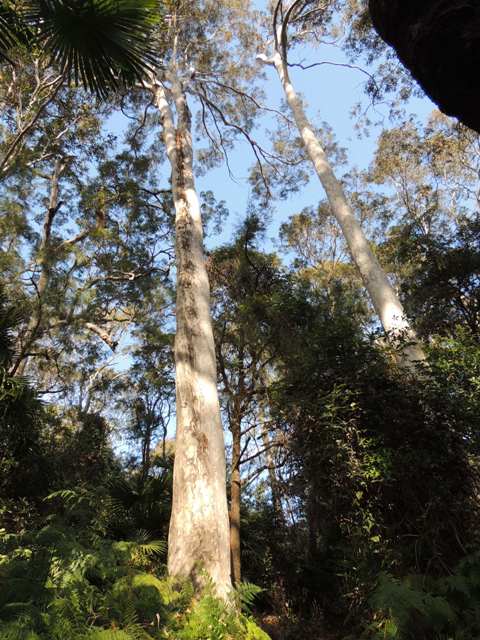 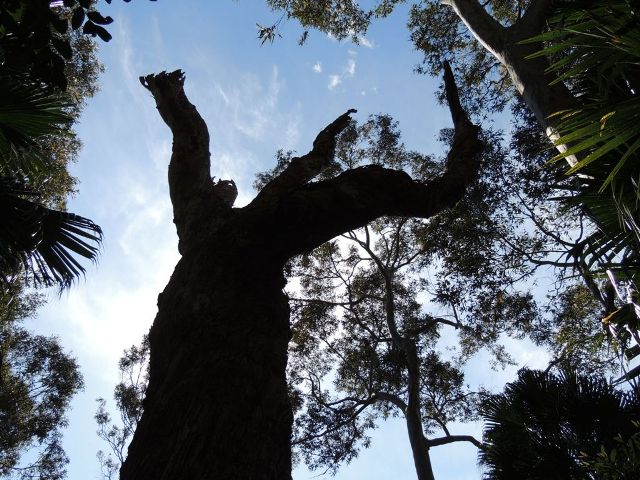 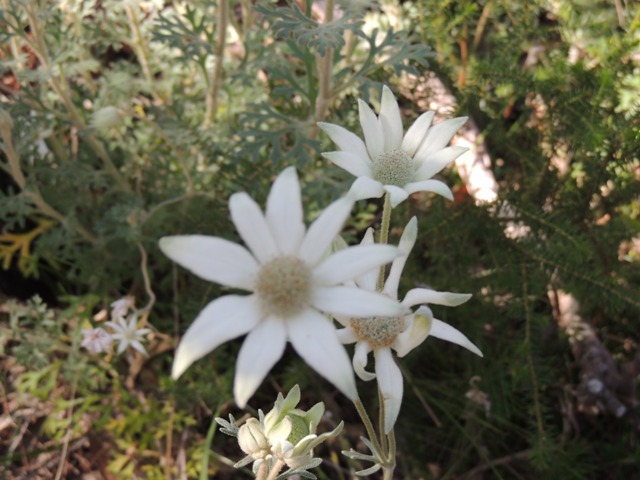 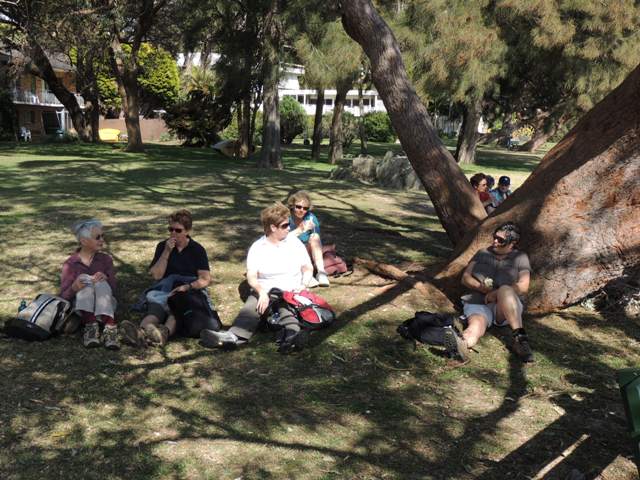 Bush to Beach
by Robyn McWilliam

Lizards are decoratively chiselled into the rock. The top beam of this sandstone archway announces the entrance to Angophora Reserve on Palmgrove Road Avalon. Along with Hudson Park the area covers eight hectares.

A plaque just inside the Reserve is dedicated to the memory of Connie Adams 1933-1989. She devoted years to preserving the natural beauty of Avalon.

From Joan Lawrence’s book Pittwater Paradise I learn that the Wildlife Society purchased the Reserve as a bushland sanctuary in 1937 and opened it officially on 19 March 1938 with the aim of preserving a giant angophora tree. This species, Angophora costata, is also known as the Sydney red gum. In the book there is a photo of two women dwarfed by the imposing trunk.

Spring is a great time to venture along the track flanked by dense foliage: ferns, cabbage tree palms and towering gums 15 to 25 metres high. Standing beside one of the immensely tall angophoras, I feel tiny. Looking up I see the blue sky is spattered with leaves. The tree’s limbs are torturous and straggly. Its pale grey trunk is dimpled and the shed bark round the base is tinged brownish red.

When I brought my husband and grandchildren in here we’d had lots of rain. We swung our granddaughter over muddy places on the trail. Hands entwined, four of us encircled a huge trunk. Pa stumbling back over dead palm fronds made the children giggle.

Then we went on to the dead tree. Silhouetted by the sun, its dark lifeless branches loomed overhead. From its shape it might be the one in the photo. Further along, we climbed steps cut into rock and arrived at the waterfall. Water streamed over rust-stained rocks as we stood on the timber bridge. “See the colours, Nanna,” my granddaughter said, pointing her tiny finger as sun shone on the ochre and umber tones. We turned back; our brief sojourn in the bush had been an adventure.

Recently, I lead my bushwalking group along the track. Formed more than 25 years ago, it was run by the Narrabeen Community Centre. Now it is a private group. Rosemary, a former leader, would scour the street directory for any sections of green on the maps and devise walks. We start at 9.30 am and aim to finish by noon. A few of us then head for the nearest café for a coffee and light lunch. It’s a fantastic way to explore your local area.

As we tramp along, our chatter is competition for shrieking white cockatoos. Catching our breath on the bridge, we hear whistles, chirps and the odd squawk of other birds. There’s no water running today. Fronds of tree ferns provide a little shade as we glance down the gully. Cabbage tree palms spread their fronds in a circular display. Dead ones droop around the trunk like a skirt.

Then on through Hudson Park and upwards we walk past a few flowers promising spring. The pinky mauve petals of boronia and the yellow of egg and bacon flowers brighten the track. There’s an expanse of flannel flowers mostly still in bud. And later straggling over sandstone boulders is the native violet with its tiny purple flower.

We take a right turn along behind houses and end up in a cul-de-sac. Then we continue left down past back fences to the steps onto Hudson Parade. Across the street to the left is another pathway down to Delecta Avenue and we come out onto Clareville Beach. Lawns run right down to the sand. Shady trees provide a place to take a break and midweek we have the place to ourselves.

What a spot to look over Pittwater through the myriad of moored boats! In the sun’s warmth it’s tempting to stay by the shore. But we head back into the bush to enjoy the rest of our walk amidst the bird calls and native flowers. If you haven’t discovered Angophora Reserve and where it leads put it on your to-do list this spring.

Words and Images by and Copyright Robyn McWilliam, 2012. All Rights Reserved 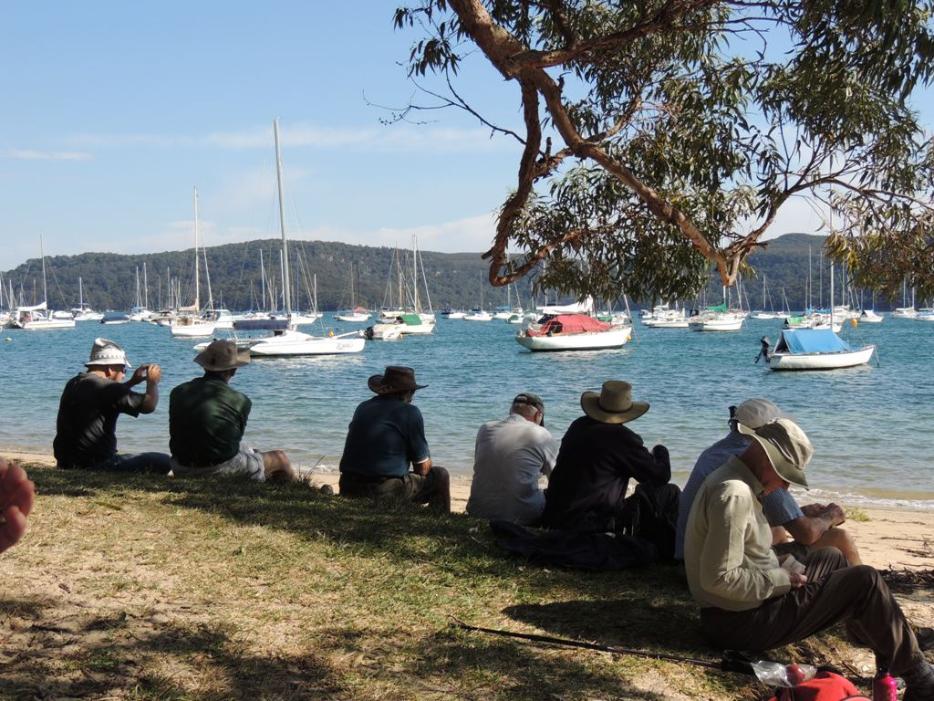