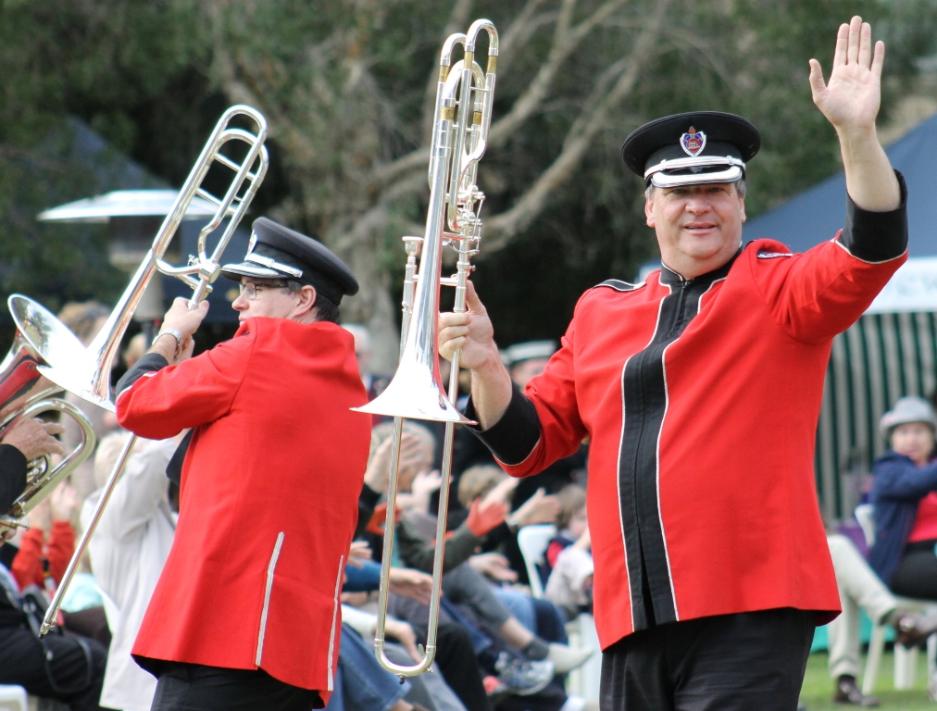 Just one of the wonderful bands that performed yesterday at the only Annual Tattoo in NSW - the NSW Fire & Rescue Band and Marching Team . Picture by A J Guesdon. 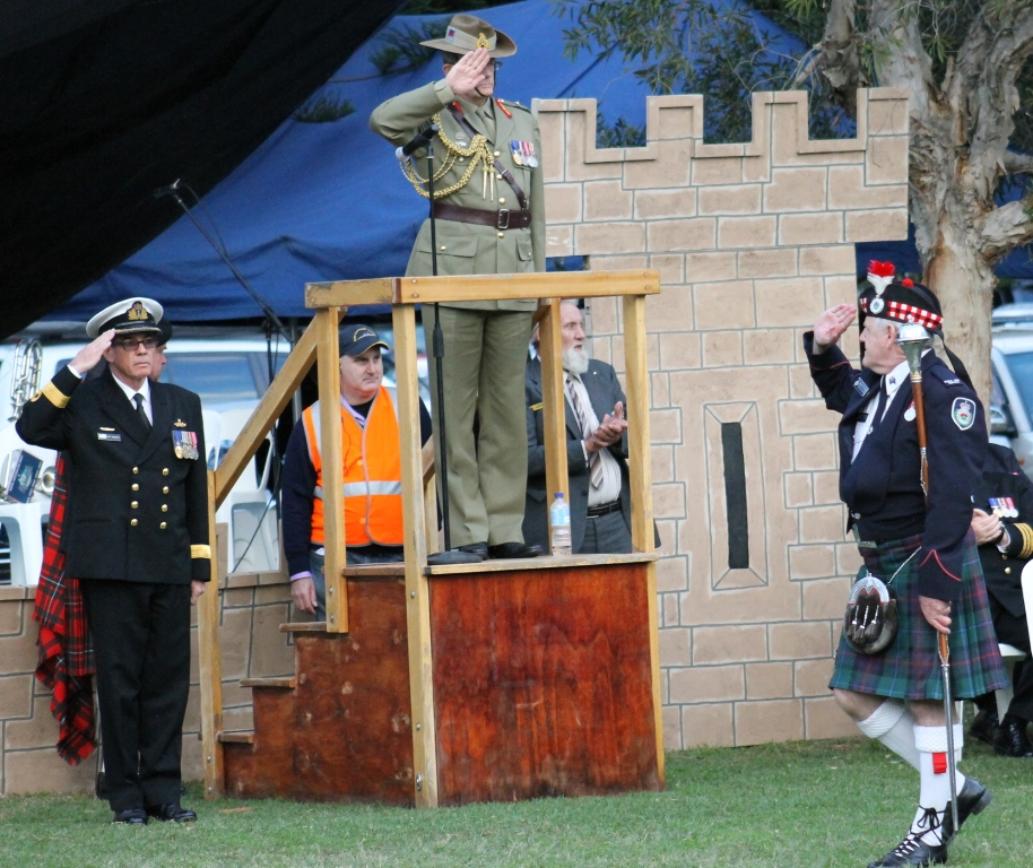 The Salute during the March Past was taken by Major General Brereton accompanied by Commodore Geraghty. Picture by A J Guesdon.

The MC for this year’s Avalon Tattoo, Andrew MacGregor who has performed this duty since the first, welcomed all to the Dunbar Park with Cead Mile Failte – One hundred thousand welcomes ladies and gentleman, laddies and lasses to the 2013 Avalon Tattoo. I am Laird Andrew MacGregor of Glencoe, your MC for today.

This year’s Avalon Tattoo was a family fun day from beginning to end that brought together many of our local groups and organisations as well as being a great way for our younger people to learn about what options there are in the cadets to invest in and grow themselves while physically growing tall. The Tattoo is a significant event on the Northern Beaches and increases each year. It remains a free, not for profit, non-commercial activity and relies on the support of the volunteer participants.

This year, in keeping with the established traditions of this annual Northern Beaches of each service taking a turn to be the focus, 2013 gave all a chance to see our Royal Australian Navy and Cadets from Training Ships Condamine, Sirius, Tobruk, Hawkesbury and Sydney. The Challenge and Freedom of Entry was theirs to exercise this year. Inspector Graeme Pickering, Northern Beaches Local Area Command, NSW Police addressed the Challenge this year beside Pittwater's Mayor, Cr. Jacqui Townsend. The Salute during the March Past was taken by Major General Brereton, Head of Cadet, Reserve and Employer Support Division.

A highlight, besides all the wonderful Pipes and Drum bands, was hearing the RAN Concert Band under the baton of Steven Stanke. This band was formed in 1913 and the first concert band came into Sydney on HMS Australia in October 2013. A great reminder of the International Fleet Review on Sydney Harbour later this year.

A full list of all participants is listed below.

This year we share Commdore Graham Sloper’s (Rtd.) address as part of the Sunset Ceremony. Graham works tirelessly with a dedicated team to ensure each Avalon Tattoo is a success and is also coordinating the 2015 Commemortaion Service at Rat Park for ANZAC Day. 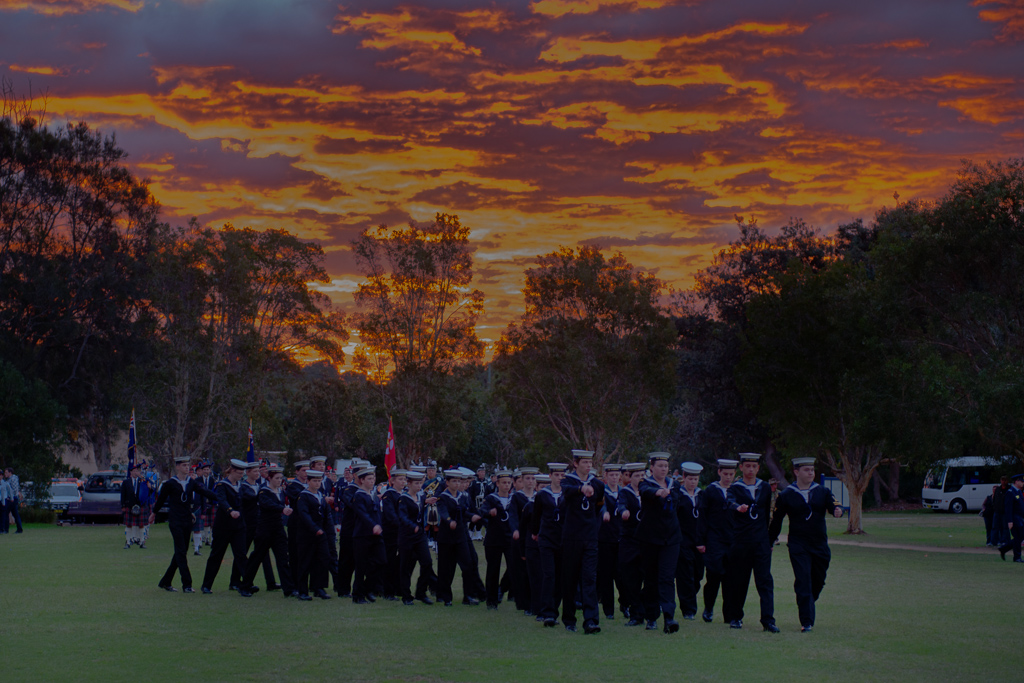 That was a magnificent Ceremonial Sunset and please join me in acknowledging the Cadets under Parade Commander LCDR Lois McKinney and the wonderful Royal Australian Navy Band under Bandmaster CPO Mark Ham.

We are trying something different tonight with glowsticks now being distributed. Please do not activate them until the massed pipe bands commence and, on completion, if not being taken home, please place them in the rubbish bins at the rear of the seats.

The RSL of Australia is an organisation of men and women who have undertaken military service for Australia, the Commonwealth or its Allies. There are sub-Branches in local areas which are separate to the commercial RSL Clubs but are usually co-located with them. The Avalon sub-Branch is proud to be able to host the annual Tattoo as a community involvement especially in supporting our local youth and community support groups and organisations.

It would not be possible without the generous support and cooperation of the Pittwater Council which has enabled the annual Tattoo to be a major Northern Beaches event.

Before moving to thank those who have made the Tattoo such a success, I'd like to mention the Cadet Units on the Northern Beaches. There is the Australian Air League and then what are known as Community Cadet Units in 201 Army Cadet Unit, who have participated in all seven Tattoos and 305 SQDN Australian Air Force Cadets who have only missed one. The Navy Cadet Unit Training Ship CONDAMINE has had mixed fortunes over the last few years with lack of Staff and a base. A study is being undertaken to determine the feasibility of re-establishing Navy Cadets on the Northern Beaches, possibly even here in Avalon. I have been advised that there may be flexibility in renaming the Navy Cadet unit and it might be TS PITTWATER or TS AVALON.

Names of potential staff and cadets can be given to the RSL sub-Branch, details are in the flyers being distributed.

And now a plug for the ANZAC Centennial. It is now less than two years to the Federal Electorates of Warringah and Mackellar combined March and Commemoration Service on the Sunday before ANZAC Day 2015 from Warriewood to Rat Park. All schools, community services and groups and sporting organisations have been contacted and the provisional support is overwhelming. We have over 5,000 in the march and an estimated 20,000 at the Service. There will be massed school bands and choirs on the park for the Service and all the cadet units will participate. I often say a volunteer is someone who didn't understand the question so I volunteered to coordinate the Centennial Ceremonial. Please feel free to contact me about the Commemoration.

Youth Career Options. A welcome result from the Tattoo is the provision of career information to our youth. While the ADF gives advice on options and how to keep them open, other Community Services including RFS, Police and SES have had a number of enquiries.

Now for a few acknowledgements:
To the VIPs and special guests. Thank you for allocating time from your busy schedules. I would particularly welcome Mrs Ana Guterres, representing His Excellency Abel Guterres, Ambassador for Timor Leste, who sends his apologies as he had to be in Dili this weekend. In doing so I acknowledge the great work of Pittwater Council and the Pittwater Friends of Soibada in their cooperation program. Australia seems to have forgotten that nearly 40,000 East Timorese lost their lives in World War II supporting a small force of Australians. For the Defence and Community Service representatives thank you.

To the Spectators. The sub-Branch offers the Tattoo for you to enjoy and I hope today has been successful.

To the Participants. None of the performers nor the displays receive any financial assistance so their attendance is exceptionally generous noting these times of financial paucity. This is particularly applicable for the returns of the Federal Police Pipe Band from Canberra and the Pipes and Drums of the National Servicemen from Brisbane. This is their second year and hopefully, the National Servicemen's Band will be the lead next year in Tattoo 2014 when 201 Army Cadet Unit will exercise Freedom of Entry and the Tattoo will have an Army emphasis. Thanks to the Pipe Bands and the Concert Bands, one being that from the NSW Fire and Rescue with their precision marching team.

To the Volunteer Workers. Again this year a very small number of volunteer worked tirelessly to make today possible. It is not possible to identify all individually without forgetting someone but you have my and everyone's sincere thanks. Just to mention a few:

Robert Dodds and his group of Club and sub-Branch members who not only prepared the stage, flagpoles, lighting and awning but have to remove them on completion.
Andrew MacGregor who coordinated the displays and, with Linda, produced all the brochures, and then has been the MC
Peter Wilson, the Northern Beaches Nashos and the Marshalls who controlled road barriers, vehicle movements and parking.
The Navy Cooks and the Two Tanyas who provided the food for today including lunch sandwiches for 750.
The VIP Coordinators or should I say controllers lead by LTCOL Richard Morgan.
Welcome back to Mark Bradbury after his accident who coordinated the ceremonial
Ted and Ann Noble of the Rural Fire Service who coordinated the pipe bands
David Willingham for the castle background
The NSW Police for the traffic control for the Street Parade

What is The Future? Some of you may have heard rumours from a small vocal minority opposed to the Tattoo but I can assure you that this great event will continue. Next year will be 201 ACU's Freedom of Entry and an Army emphasis. There is the possibility of a large number of armoured vehicles and even of financial sponsorship which might then allow some reimbursement to participants for their costs in attending. The
participants have been requested to provide constructive criticism on improving the Tattoo and, as something new, comments from spectators to the sub-Branch email on the Navy Cadet flyer, or on Facebook would be welcome.

Finally, Special Mention is made of our Community Service representatives and the youth organisations. We have heard the bands from Mater Maria, Pittwater High and Barrenjoey High Schools. The participation of the RFS Cadets, Sea Scouts and SES in the Street Parade together with the Sea Scouts Fire Display Team complement the Navy, Army and Air Force Cadets and the Australian Air League with their Hornets Drum Corps. The sub-Branch is honoured to make this Tattoo commitment to the community, especially to our youth, the future of Australia. 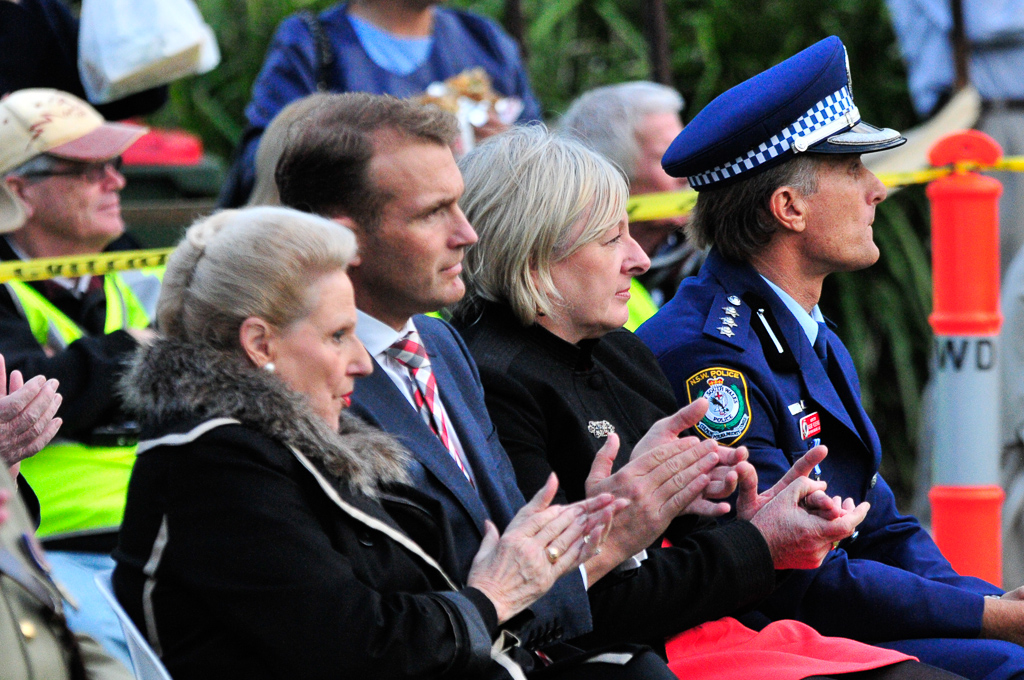 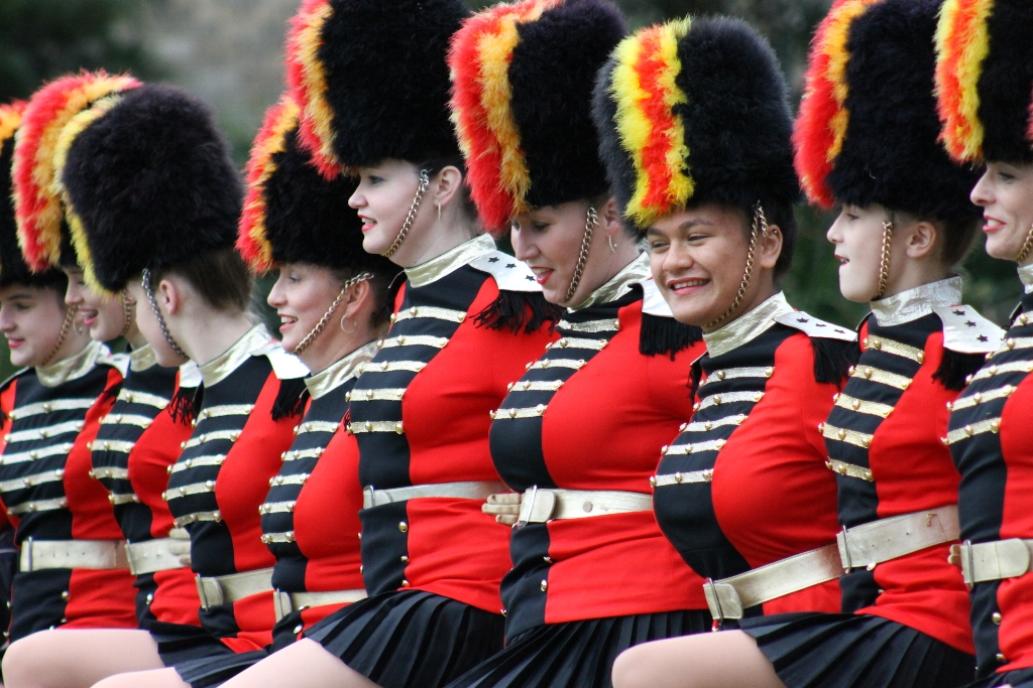 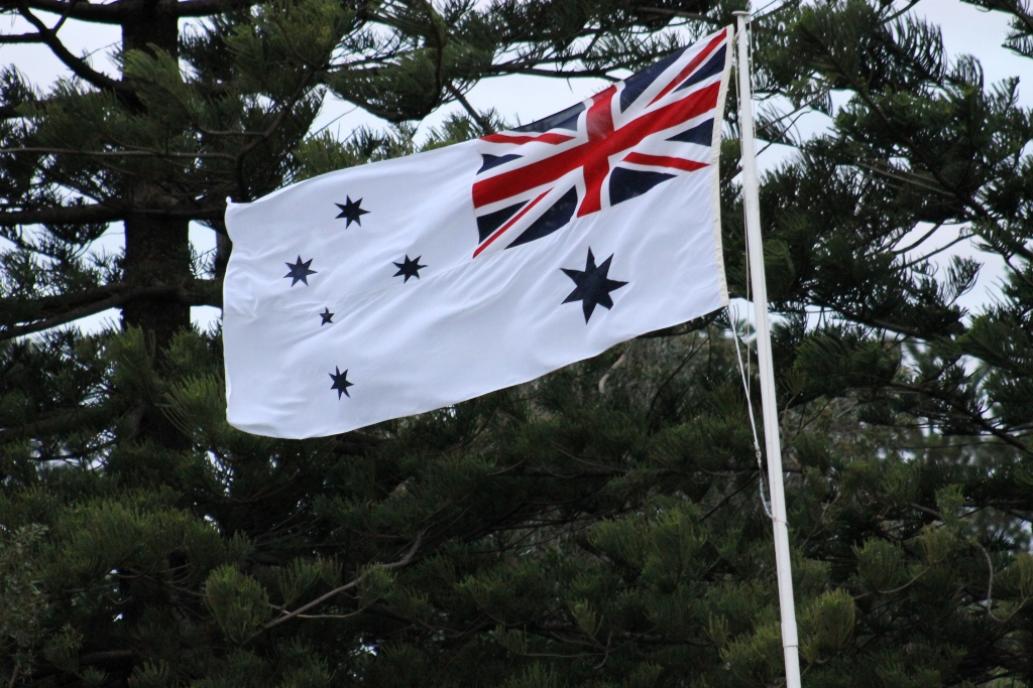 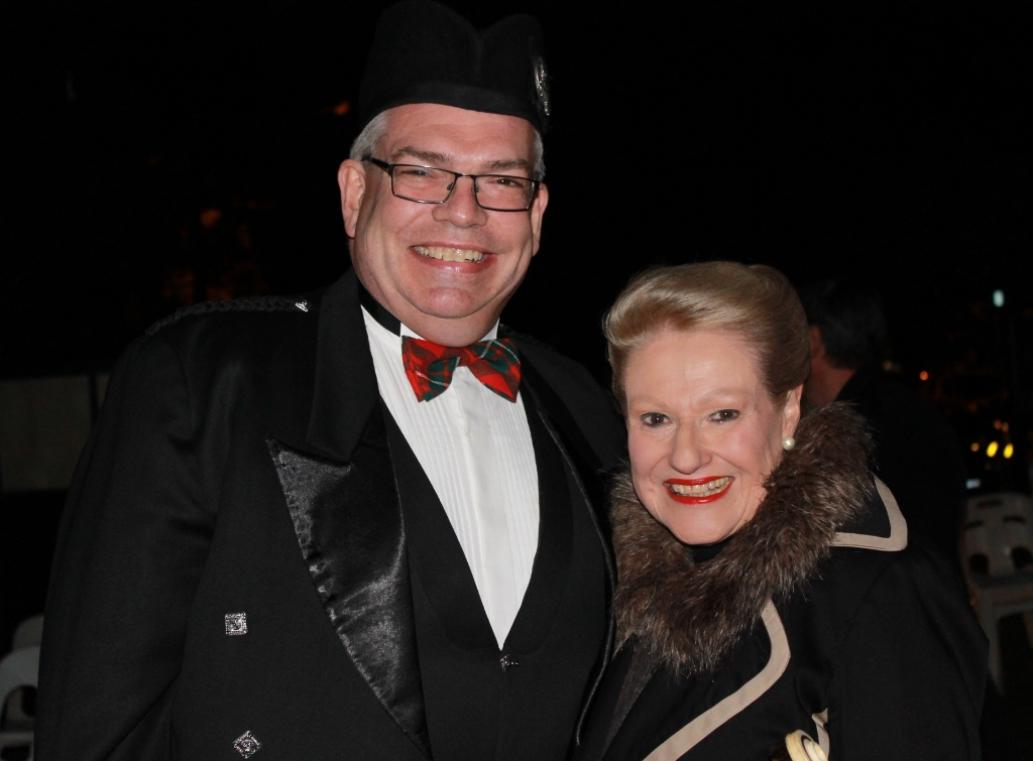