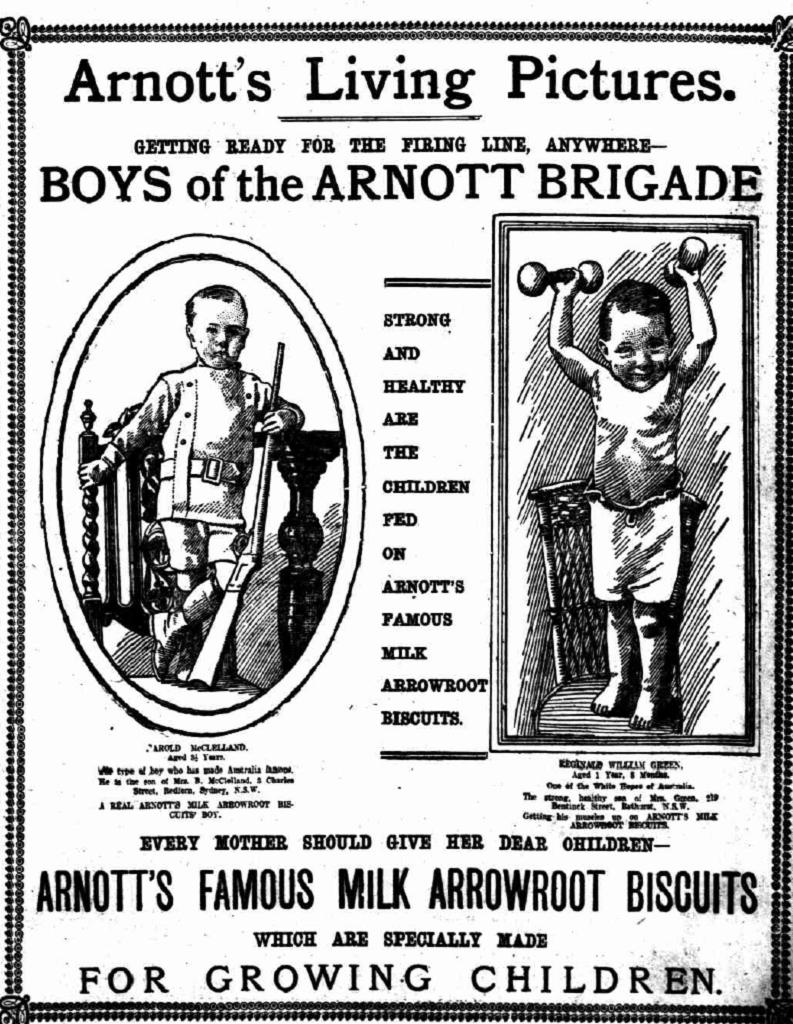 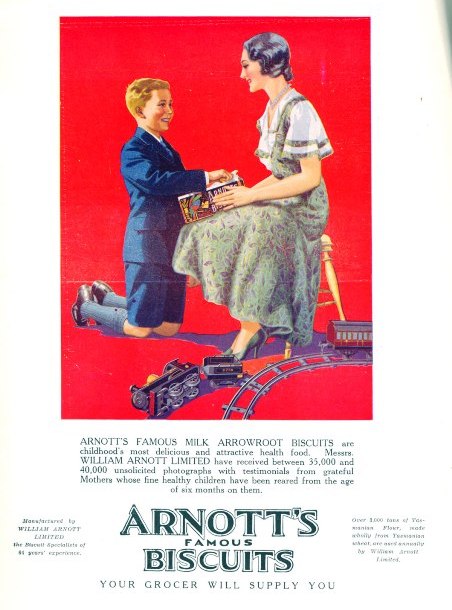 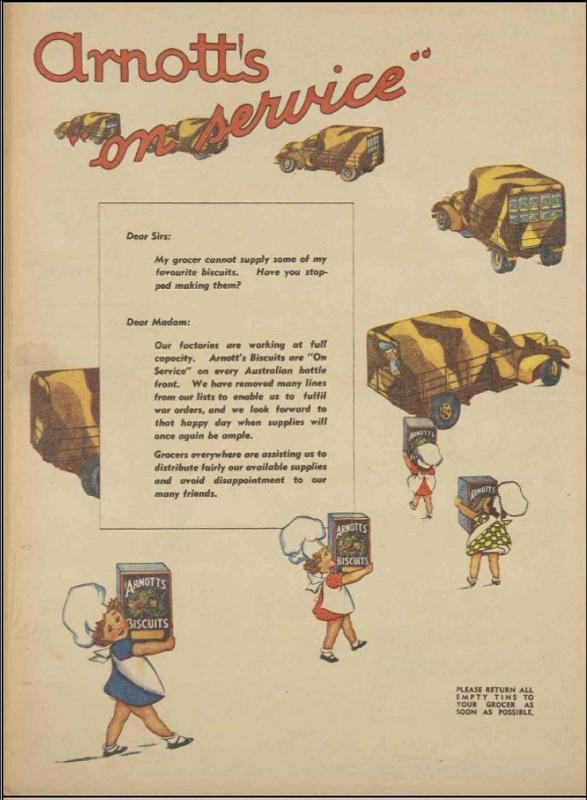 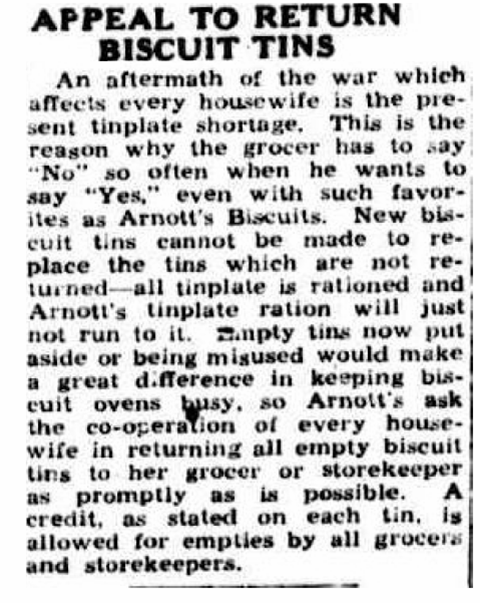 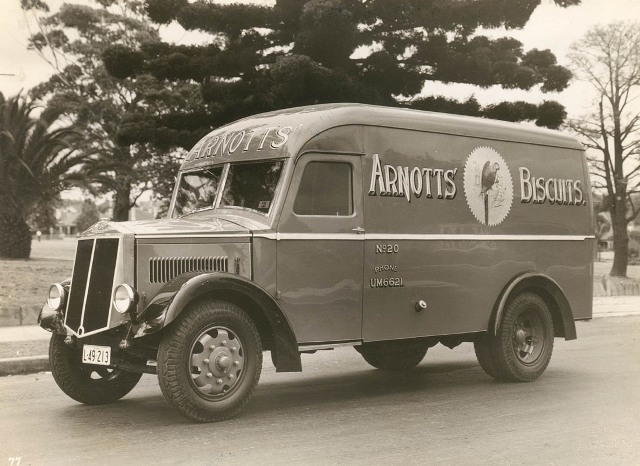 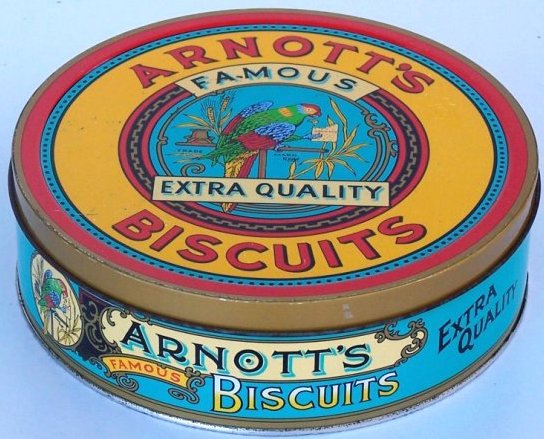 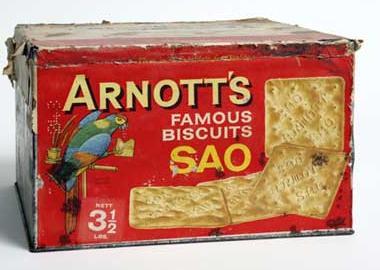 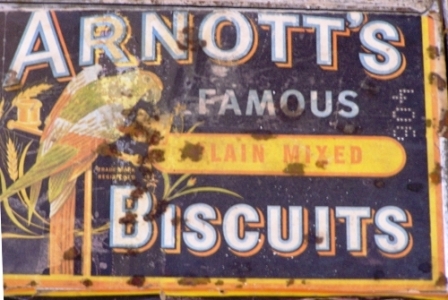 Fetching between $1700 to $2000.00 for earlier tins, and some asking $24.00 for tins only a few years old, all who have Arnott’s biscuit tins to store your own homemade Anzacs and cakes in, may want to relegate them, and their attractive finishes, to collectors items ands spare them the rust caused by water. Despite the Arnotts Company becoming the property of Campbell’s Soup (US) in 1997, many people collect these tins in each year’s edition (usually at Christmas or in other celebratory anniversaries and issues to celebrate events) due to their ‘Australian’ connection. Arnott’s was considered an ephemeral Australian company; during the Depression they cut back workers hours to three days a week rather then dismiss people. They created and sent special biscuits in soldiers only tins for our troops during both WWI and WWII. They sold biscuits to many places overseas and around 10000 tons per year in Australia annually (1930’s). 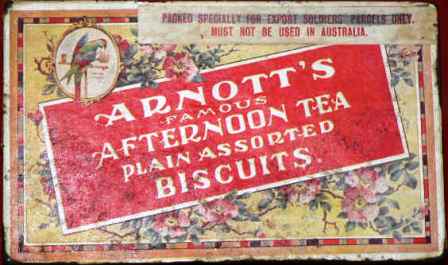 Used to store marbles, repair kits, photos, with some reports of people’s ashes also being buried in them, the Arnott’s biscuit tin has become part of an Australian heritage to some and one of those collectors’ items that increases in value when not kept for aesthetic reasons. 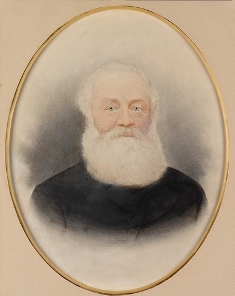 William Arnott, was born in 1827 (1827-1901) in Pathhead near Kirkcaldy, Fife, Scotland and emigrated with his brother David to Australia in 1848. The milk arrowroot biscuit stemmed from an idea when crossing the ocean to Australia as this formed part of the diet of all those on board. He began a baker’s business in Maitland but after floods in 1859 and again in 1861 moved to Hunter Street, Newcastle.

In 1875 a new enterprise, William Arnott's Steam Biscuit Factory opened in Newcastle. In 1900 the first Arnott’s tins began appearing, as a means to store biscuits, keeping them fresh. The first Sydney factory was opened at Forest Lodge in 1894. In 1905, the Arnott family (William had seven sons and five daughters through two marraiges) wanting to expand, decided that a larger factory was required. Requiring access to the railway for transportation, the Arnott’s purchased a six and half acre site at Homebush in 1906. The factory was designed by architect Charles Slatyer and built in 1907 at a cost of £10,400. Until 1940 biscuits were sold by weight in 14 pound tins.

Arnott’s tins stamped with the Homebush address are very 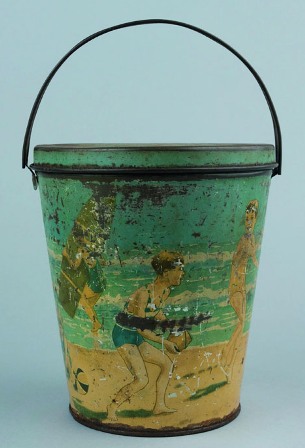 popular. One of the most sought and valuable Arnott’s biscuits tins is the "beach bucket" containers produced by Arnott's at Homebush during the 1930’s, in fact all tins made before the war (II) can be worth up to $2000 if found in very good condition. We found one Tinplate beach bucket style container with a lid, featuring images of families at the seaside, impressed to the base 'William Arnott Ltd - Biscuit Manufactures - Homebush NSW' Australia, circa 1920 (?), 26 cm high, 16 cm diam (to Right).

Another rare and collectible Arnott's tin was the castanet tin which can be worth even more. Several Arnott's promotional items were made, and the glass barrels used to display biscuits on shop counters are also very desirable. The value of Arnott's tins has increased since the company was acquired by Campbell Soup Company in 1997. While " Any featuring early versions of the famous parrot logo (a Mexican species, according to legend) are especially prized. Some collectors only want the parrot in its various representations". (James Cockington . 2007. It takes the biscuit. September 12, 2007. SMH)

The first printing and branded tins were made in 1868  by the UK biscuit company Huntley & Palmer, who introduced the Ben George tin (named after Benjamin George, who patented the new transfer-printing process and the first lithographic tin ever made, the “Ben George” tin.).

Vintage tins are usually heavier then more modern version due to the materials used, and their inks and paints will have faded due to age. Always try and collect those that are not rusted or damaged. Some state not to let the early transfer print tins get wet as this will cause a ‘bloom’ on the surface and ruin them.

ARNOTT'S CAKES AND BISCUITS.
Although Arnott's principal establishment is at Newcastle, in all provision shops of Sydney there are to be found at the present time "Arnott's Christmas cakes." The popularity of these goods is shown by the ever increasing demand, and the quality of them is so good that many thrifty housewives are beginning to give up the making of cakes on the ground that they can get these nice cakes cheaper than they could make them. Although at this time of the year special attention is directed to the Christmas cakes, the huge variety of biscuits produced must not be forgotten. By far the largest biscuit-makers south of the line, the Messrs. Arnott have much to be proud of. Mr. William Arnott established the business in 1868 on small lines. Since then its ramifications have extended through all New South Wales.
ARNOTT'S CAKES AND BISCUITS. (1894, December 20). The Sydney Morning Herald (NSW : 1842 - 1954), p. 3. Retrieved  from http://nla.gov.au/nla.news-article13990166

ARNOTT'S BISCUITS.
Arnotts biscuits are well displayed in all the leading grocers' shops, and are in ever-increasing demand from those to     whom quality appeals. Messrs Arnott Ltd have recently put on the market a few dainty and appetising new varieties, such as "King's Own" (an assortment of fancy biscuits especially suitable for the boys at the Front), "Good Luck" (a delicious shortbread), "Adora Cream Wafers," "Scotch Shortbread Fingers," " Date Shells," "Selected Afternoon Teas" (fancy line), " Mab Cake." " Mario " and "Creamy Chocolate," besides the old- established favourites, Arnott's Milk arrowroot '"the children's food'), Sao Creams, Zuzu Mixed, Fairy Cakes, and a  host of others
ARNOTT'S BISCUITS. (1916, December 5). The Brisbane Courier (Qld. : 1864 - 1933), p. 3. Retrieved from http://nla.gov.au/nla.news-article20095959

BISCUITS. Mr. C. R. Arnott's Visit. Among the passengers from South by the Canberra, was Mr. Campbell R. Arnott of the well-known firm of biscuit manufacturers, William Arnott Ltd, a name which Is a house hold one throughout Australia. Mr. Arnott who is connected with the advertising side of Arnott's extensive business. Is paying his first visit to North Queensland, and he has al ready been -very favorably Impressed by the passage through Whitsunday Passage and Townsville, In an Interview, Mr. Arnott stated his firm was doing an ever-expanding trade In Queensland. It was because of this that Messrs. R. M. Gow and Co., Arnott's Queensland representatives, had opened a branch In Townsville, and fresh stocks were sent here weekly direct from the factory to give North Queensland retailers the best service possible. They were deter mined to maintain service, along with the high quality of their products. It was Interesting to learn from Mr. Arnott that there Is no arrowroot In Arnott's arrowroot biscuits. 'Arrowroot Is injurious to the baby's stomach,' said Mr. Arnott 'The biscuit has been given merely a trade name. Now, the shredded wheat biscuit describes exactly what It Is. It the essentials of the grain plus that contains the whole of the wheat— all roughage which Is so essential to healthy digestion.' The mention of wheat prompted a remark from Mr. Arnott that he did not like to see it selling at so low a price. He liked everybody to be doing well, he said. For some to be doing badly, simply started a vicious circle. But things were not too bad now — not depressed. Times were nor mal, not supernormal. These were not boom times, nor had they a right to expect boom times yet ; they would be a long time coming, he thought. But why should we not be absolutely content with the normal for a while 7 Alterations in the tariff had not assisted his firm, said Mr. Arnott they had stood on their own legs for 60 or 70 years, and did not fear foreign competition. On the contrary his firm was Invading foreign markets—Japan, China, the Malay States, Java, Egypt and all parts of Polynesia. The factory makes 115 standard lines of biscuits, he said, and produces one new brand on the average once a month. The main part of the machinery used in their manufacture still came from England, but all additions and repairs were executed In Australia. 'And, think of the vast quantities of Australian raw materials that go into the production of those 10 000 tons of biscuits,' exclaimed Mr. Arnott 'And think of the vast quantity of Queensland sugar that is melted into them. I'm glad to be in the land where It grows. Mr. Arnott went on to Cairns by the Canberra. He returns to Townsville by the vessel and goes by train to Rockhampton, and back south.
ARNOTT'S BISCUITS. (1933, March 21). Townsville Daily Bulletin (Qld. : 1885 - 1954), p. 4. Retrieved from http://nla.gov.au/nla.news-article61379594