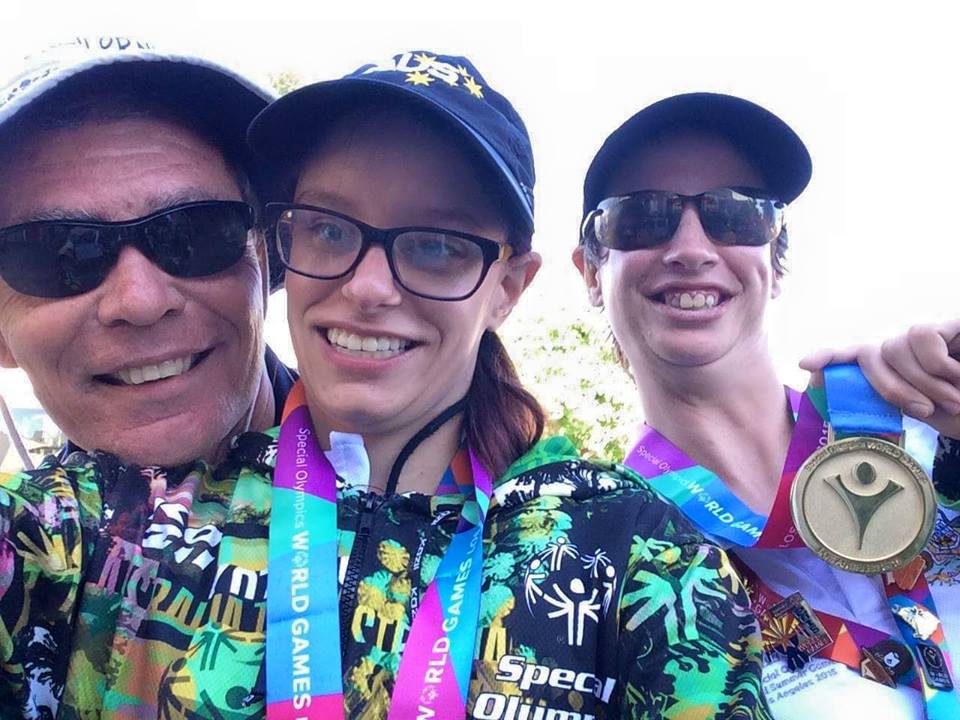 Congratulations Alyse and Mel - Gold!  - with onboard coach - Chris Ruston

Alyse Saxby has once again won a Gold medal in Special Olympic World games In Los Angeles, August 2015.  She teamed up with Melissa Nelson from Port Stephens to win level 3. She secured the victory again on the last day of competition, but this time won by 3 points. She won her first Gold in Greece in 2011 sailing in level 2 following her second in Bejing sailing as forrard hand in Level 3.

Australia contested 4 levels in this World Games. Level 1 requires the athlete to control the jib and help ballast the boat while the boat is skippered by a unified partner. If there is a large fleet of contestants in any level, divisioning races before the actual comp. break the fleet up into smaller divisions. Sonja Gilmore from Queensland achieved silver in division 2, level 1. Jacob Williams from Queensland achieved silver in level 2 division 3. Both levels 1 and 2 raced in CFJ’s (California Junior dinghys). In level 2 the boat must be skippered 100% of the time by the athlete.

In Level 3 the boat must be skippered and crewed entirely by the athletes. The on board coach can assist by ballasting but must not steer or adjust the sails. In Los Angeles there was only one division with one lay day for one crew every race day. There were 4 boats for 5 crews.

Chris Ruston SO2015 coach with the sailing team, sent through reports when he could.

"Lucky it was lighter on the last day. Alyse finally got enough confidence to say that she was not afraid of the jibes any more.  Should have seen the look on Mel’s face when I said she would need to help Alyse by working the main.

The L1-2 CFJs had problems. They are much more unstable than a 420. L2 should have got the gold except that the Russian Olympian who had not done well in the divisioning rounds suddenly started winning overall. 2 divisions higher.

There were no entrants for level 4. Level four requires a team of 2 athletes to race entirely unassisted. Level 5 requires a single athlete to sail alone and unassisted. The boat used for this was the Laser 2.4. Australia blitzed this with Allister Peak (Gold) and Bronwyn Ponder( Silver) repeating their dominant effort from Greece 2011."

Alyse’s lead up to the Special Olympic World Championships in Sailing in Los Angeles July 2015.

After winning Gold in level 2 as skipper of a 420 dinghy, Alyse bought a spiral sailing dinghy and has it housed at her club (RPAYC). This was in the expectation that  she would attempt to gain selection in a level 3 and the craft would be similar to those used in China (2007) or Greece (2011). The skipper in level 3 must steer 100% of the time , as well as control the mainsail and hike, so the Spiral develops all of those skills very well. She continued her racing experience

In Hansa competitions sailing both singles and doubles as often as possible, she continued regular training at Pittwater Sailability and later at Pittwater Crystal Bay sailing everything from the 203 dinghy, 303 and Liberty dinghies and racing at every opportunity.

She teamed up with Melissa Nelson from Port Stephens Sailability to compete for selection in the NSW Special Olympics Sailing Team at Melbourne in October 2014. The girls travelled to Japan to sail the 303 doubles in the Hiroshima Peace Regatta and sailed very well in this open regatta. They were aiming to get selected in level 3 or 4 (level 3 has an on board coach while level 4 has no coach on board). Her coach in the NSW team was Colin Alderton who also competed in Level 1 with his son Bradley.

Friendly regattas were held both in Canberra, Port Stephens and Queensland to give all sailors race experience before the selection trials in Melbourne. There also was an intensive coaching weekend hosted by The Royal Motor Yacht club at Newport staffed by Crystal Bay Sailability volunteers.   All of these sailing opportunities occurred in Hansa class dinghies. In the selection trials in Melbourne the girls gained selection for the World games in Los Angeles and contested level 3 with Queensland Special Olympic instructor Chris Ruston as on board coach.

Chris said during in Los Angeles; “Your work paid off, thanks again for their preparation. Lighter wind today so not too much trouble at top mark or jibing.”

The boat sailed in Los Angeles is the Cal 20 which is used to give disabled people sailing experiences. Phil Mayo of Wangi Yacht club offered to lend his boat (a Blaze 23 )to the girls for training on Lake Maquarie. Alyse travels by ferry, bus and train to Morriset. Mel and her Mum Annette join her there and thence to Wangi. The girls have been coached by Mark Skelton of Wangi YC as well as Bruce Schofield who coaches Mel at Grahamstown Dam with Port Stepens Sailability. Wangi Club has let them race from May onwards so getting real race experience in the boat.  Chris Ruston travelled from Queensland to get a day’s racing with them and was very pleased with their progress.

Alyse has been given intensive race training by the Sailability Crystal Bay team using Liberty dinghies every Tuesday morning all year. Generally 3 boats contest the starts and Alyse is coached between each race.  Generally she can complete 6-8 short races. We were expecting her to be a handful for any Special Olympic Sailor in the USA. Mel and Alyse are a great team who also are wonderful ambassadors for the sport they love.