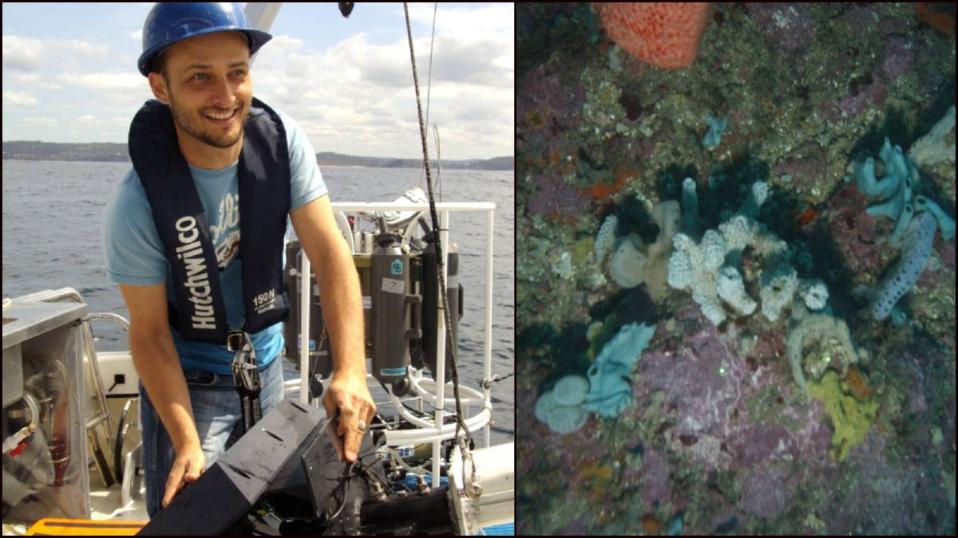 9 April 2018: NSW Office of Environment & Heritage
Large areas of reef, ancient volcanic vents and relict rivers formed thousands of years ago have been discovered on the sea floor off the Illawarra coast by marine scientists from the NSW Office of Environment and Heritage (OEH) and the University of Wollongong.
The mapping is part of an ongoing effort to create a high-resolution digital map of the NSW seafloor (SeaBed NSW), to better understand the distributions of reef and soft sediment environments.
OEH scientists have systematically scanned the first section of seafloor off Wollongong, from Bellambi Point to Red Point (Five Islands), using sonar and video systems mounted on the OEH research vessel RV Bombora.
OEH marine scientist, Dr Tim Ingleton said when mapping in the ocean we are unable to directly observe the seabed so we need to use remote sensing technologies to peel back the water to see what lies underneath.
"We use a range of different technologies to 'see' through the water column. These include sonar, laser and video systems, which are operated from boats, planes and even jet skis. We also collect sediment samples to verify our models and understand the composition of the seabed," said Dr Ingleton.
"Once our sonar mapping was completed and built into a 3D digital model, we discovered that reefs cover close to 60% of the area mapped off the Wollongong coast, with video footage collected with our partners from the University of Wollongong showing an array of colourful sponges, boulders and kelp forests. 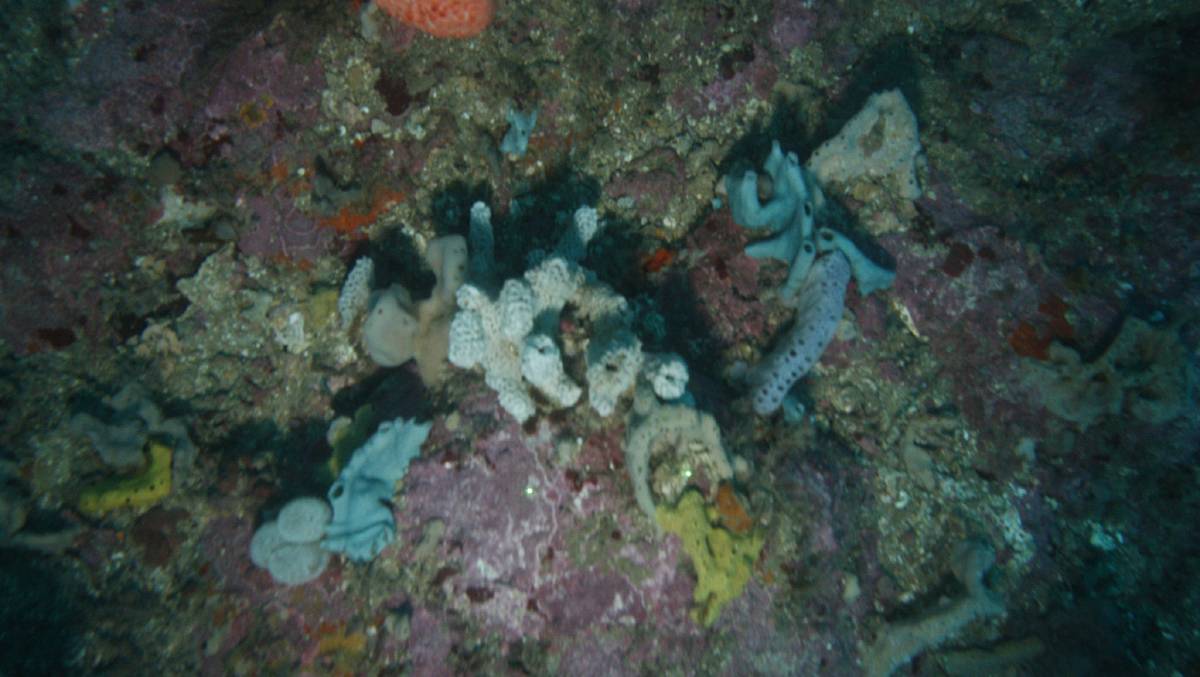 Sponge garden at Five Islands. Picture: Office of Environment and Heritage.
"We discovered evidence of ancient river channels that flowed thousands of years ago when sea level was lower and the coastline was located far offshore, which was confirmed by sediment samples containing smooth and round pebbles typical of fluvial environments.
"We also noticed a few strange round patterns that looked like 'crop circles' on the sea floor.
"These intriguing crater features may have been formed by ancient volcanic activity in the area. Volcanic features called Diatremes form as magma rises through a crack in the Earth's crust and meets ground water. Super-heated water vapor and volcanic gases rapidly expand, causing explosions that leave behind a shallow crater. 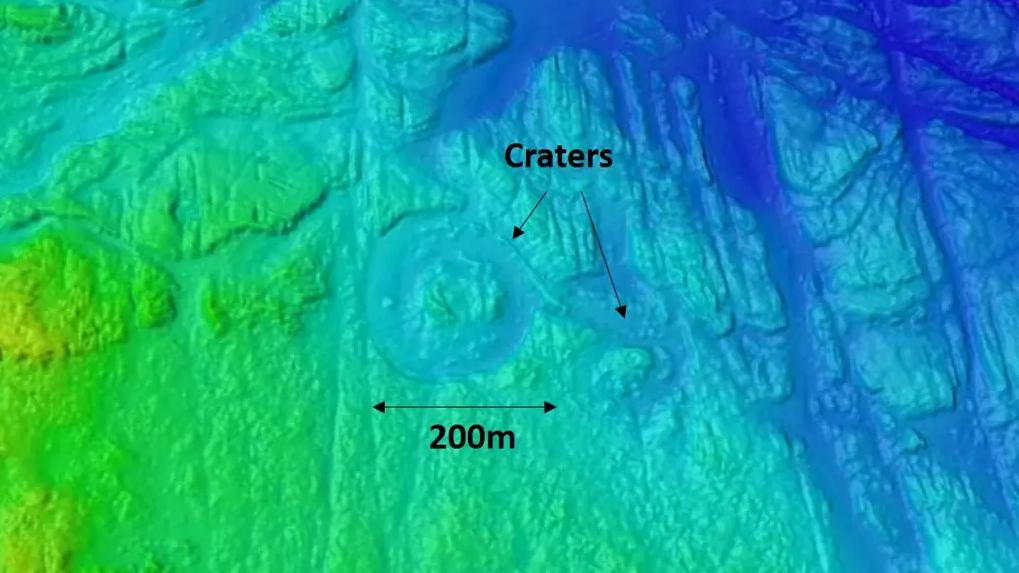 Underwater volcanic craters off the NSW coast. Photo: Office of Environment and Heritage 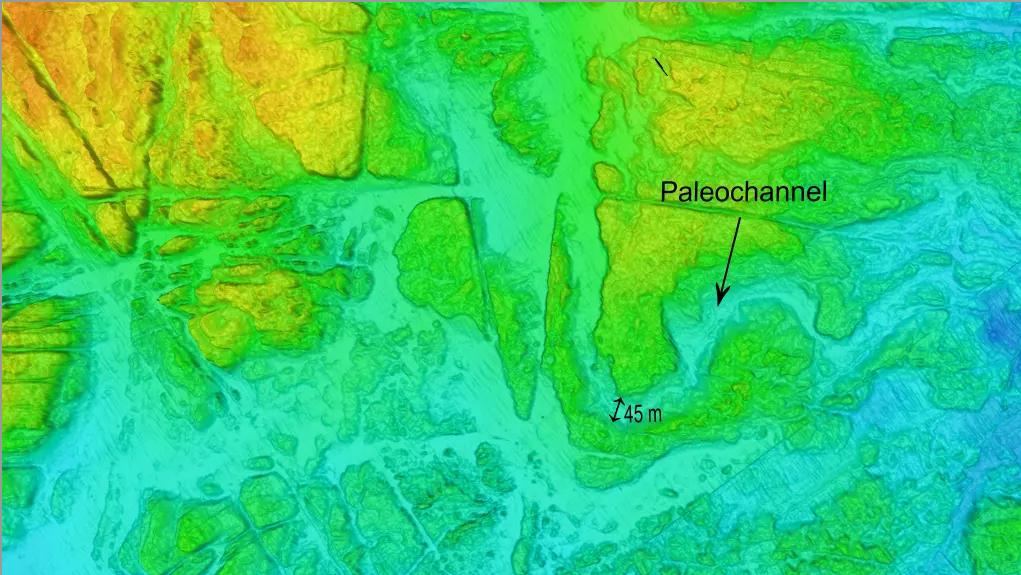 Paleochannels revealed by the digital mapping. Photo: Office of Environment and Heritage
A palaeochannel, or paleochannel, is a remnant of an inactive river or stream channel that has been filled or buried by younger sediment. The sediments that the ancient channel is cut into or buried by can be unconsolidated, semi-consolidated, consolidated or lithified.
"Since 2005, OEH scientists have mapped as much as 15% of the state's coastal waters. The SeaBed NSW program will expand on that systematically, using RV Bombora and state-of-the-art equipment to collect high-resolution data on the depth and composition of the seabed across targeted sections of the NSW coast. The data will be made available to researchers, councils and the public.
"This work will help to build a baseline digital model of the NSW seabed, and improve our understanding of the NSW seabed," said Dr Ingleton.
SeaBed NSW is a project funded as part of NSW Government's commitment to deliver state wide science and technical advice for coastal management. 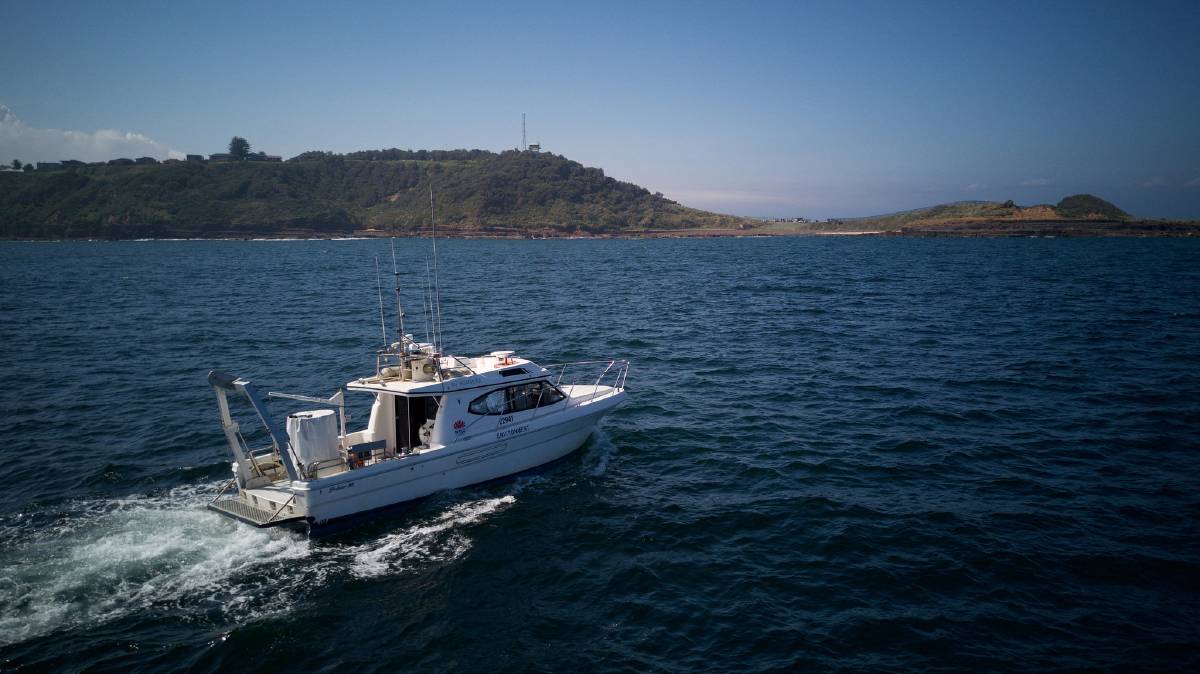 New South Wales extends three nautical miles into the sea from the coastline. The coastal waters are dynamic and complex, and support high biodiversity.
Coastal marine ecosystems are increasingly under pressure from fishing and other activities, from pollutant and nutrient exports from coastal catchments, and from changing oceanographic conditions due to climate change.
Knowledge about the distribution, structure and ecology of underwater habitats in NSW is vital for developing strategies to ensure that there are viable, healthy marine ecosystems in the future.
Until now, there has been no concerted effort to study these vital coastal systems on a broad spatial scale in NSW. OEH scientists, Dr Peter Davies, Dr Tim Ingleton, Edwina Foulsham and Michelle Linklater are doing this work together with Dr Alan Jordan from NSW Department of Primary Industries, helped in the field by our capable skipper Richard Gardiner. The research is focussed on revealing the relationships between physical and biotic factors in NSW coastal waters.
Habitat maps of the seabed are produced using a swath system (which maps the seabed in sweeps or swaths), towed underwater video cameras and oceanographic instruments.
The OEH team have produced a variety of scientific products for managers and policy makers. All existing information on coastal habitats of NSW were collated into a database (HABMAP) and reproduced as a series of maps (completed 2009) for coastal Catchment Management Authorities (CMAs), by OEH and NSW Department of Primary Industries. This information is available on the Geosciences Australia website OzCoasts. The team is now updating the HABMAP database and map series.
This work informs management of the coastal marine reserve system of NSW by the Marine Estate Management Authority (formed in 2013). The zoning plans of existing marine parks are soon to be reviewed. The habitat maps produced by OEH are crucial for planners developing and reviewing zoning plans and negotiating with stakeholders.
In September 2012, the team collaborated with the University of Tasmania, Geosciences Australia and CSIRO on a project in marine waters bordering the Solitary Islands Marine Park and Marine Reserve, off Coffs Harbour, NSW. The group deployed a 3-D video robot, sleds and baited underwater rigs, all equiped with videoing equipment, to test which method was the most effective for monitoring the health of shelf rocky reef habitats in temperate Australian seas. The results are being analysed (early 2013).
The research vessel RV Bombora recently sailed to the NSW northern rivers tracking fresh water plumes discharged during floods in January and February 2013. This data will assist the team to validate national satellite data used to map the NSW coastal water temperatures and phytoplankton (chlorophyll-a) available from IMOSexternal link - Integrated Marine Observing System, and contributes to the government's Monitoring, Evaluation and Reporting (MER).
From OEH Seabed habitat mapping webpage.
Tweet