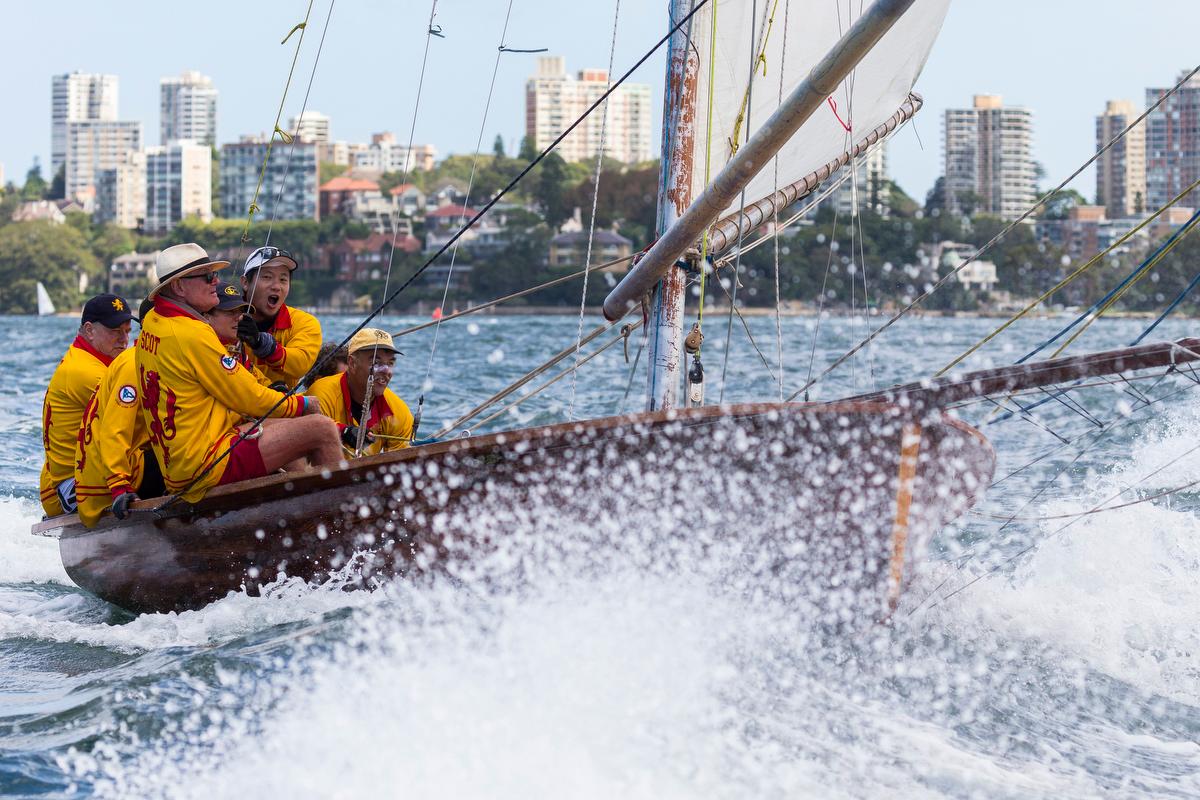 Adrian Walters’ nippy Shaw 11 Little Nico, sailing for the Sydney Harbour Regatta host club, added another victory to their impressive regatta tally on day two of the weekend regatta. Divisional winners in 2016 and second in 2019 and 2017, Little Nico’s domination of the short-course format is well and truly etched in the flagship series annals.

“Most of us have sailed together for a few years,” Walters said after racing. “This year we tried out some new sails and overall we are very happy with the result. Every year we seem to get better and better. The MC38s make us work hard though.” Walters has a busy program planned for Little Nico, including Sail Port Stephens in April and the northern regattas in the Queensland Whitsundays later in the year.

On the huge reunion that the 16th annual Sydney Harbour Regatta afforded sailors from around the state, Walters adds, “It’s nice to see real people again after Covid. All the regattas going forward are going to have good participation; everyone’s keen to get out after a long break.”

Sydney Harbour Regatta is the state’s first major multi-club and multi-class regatta post-Covid restrictions, drawing 187 entries and 1,293 crew who completed 84 races across seven course areas thanks to MHYC and the eight supporting clubs and 87 wonderful volunteers. Amazingly, there were only two protests.

Results for all divisions are available here.

“I’ve been associated with Middle Harbour Yacht Club for a long time, and I’m so pleased for the club to see all this camaraderie and confidence. This regatta has a sense of normalcy about it,” said Aldis dockside. “Owning the DK is a good learning experience for me, I came to the sport fairly late,” he added.

Performance spinnaker and non-spinnaker fleets wrapped up their four-race series with two passage races around harbour islands and other marks. A third for Russell Waddy’s Sydney 38 cruiser Allsail Another Challenge in the final division 1 race was enough to leapfrog Steve Hatch’s M, a Sydney 36 cruiser/racer out of the Cruising Yacht Club of Australia.

Waddy, Parrott and all the other divisional placegetters are invited to gather at MHYC on Monday evening, March 8, to be recognised at the official trophy presentation and go in the running for the Grand Prize Draw of: 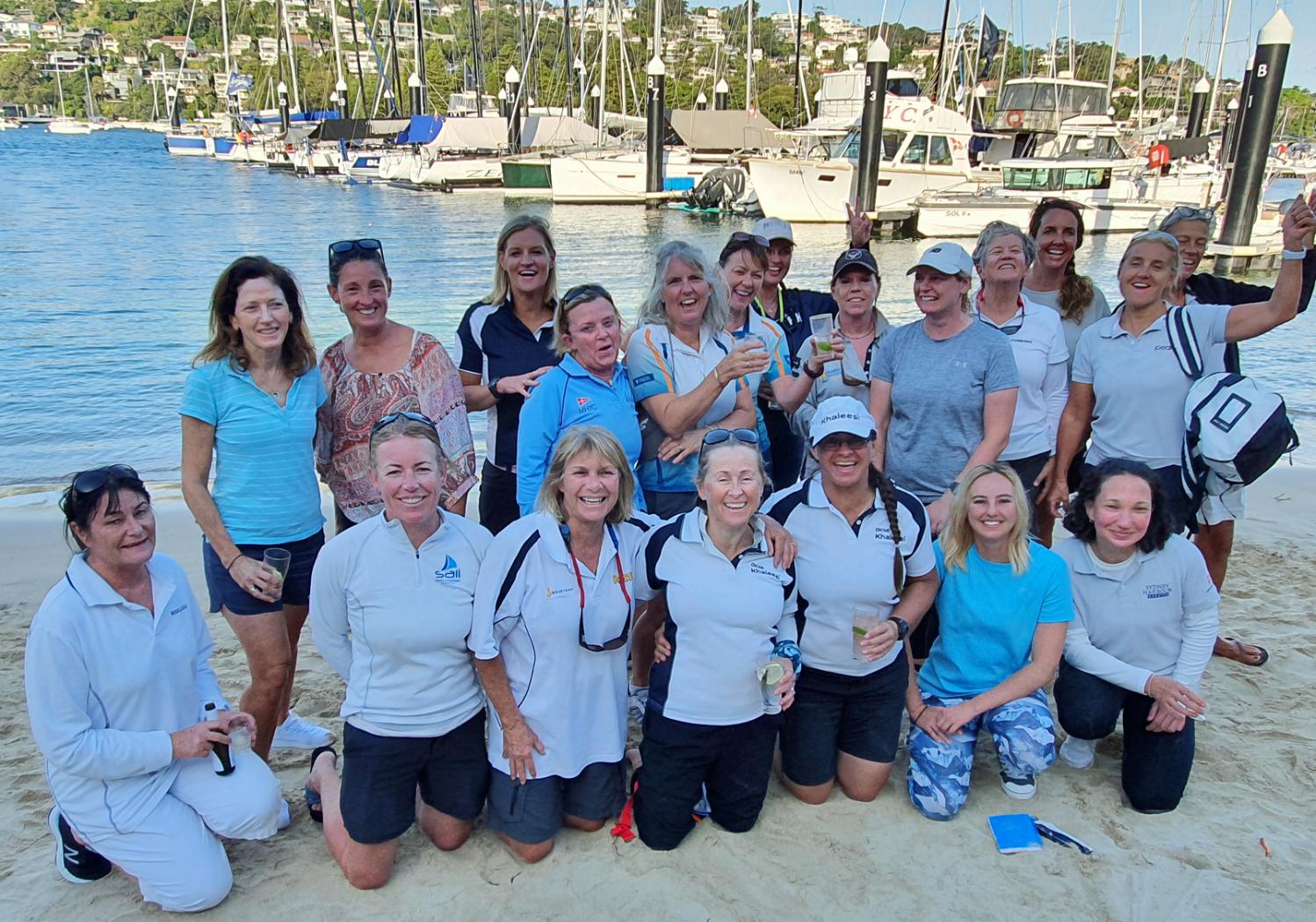 Conditions offshore on day one of Middle Harbour Yacht Club’s annual Sydney Harbour Regatta had tummies churning and skittled one Sydney 38 bowman who was saved from a Man Overboard incident by the lifelines, which was ideal for both he and his crew given they were the lead boat at the time.

As Peter Byford and David Hudson’s Sydney 38 Conspiracy approached the first top mark rounding of the class’ NSW Championship series in heavy seas, bowman Antony Hawke suddenly hit the deck during the kite hoist. The slightly embarrassed crewman said after racing that he definitely thought he was going for a swim and was happy to shift the blame to the people pulling the ropes at the back.

Conspiracy bowman is saved by the lifelines - photo by Andrea Francolini

Conspiracy went on to win that opening race and finished second in the next two windward/leewards, giving them the boat of the day title. Byford steers their Royal Prince Alfred Yacht Club Sydney 38 for the starts and upwind and Hudson takes the helm downwind. “It was challenging to steer and too choppy to get a roll on, in order to surf the waves,” Byford said. “The crew is consistent for these big regattas, and two of them are my sons Tim and Ben.”

Results for all divisions are available here.

Hazardous surf and swell along the New South Wales coast made the sea state uncomfortably lumpy for the offshore divisions – TP52/Super 50, Open Class and Sydney 38s – but also provided opportunities for the planing hulls, particularly when the sou’east breeze gusted to 19 knots. Leading the Open division after two races is Keiran Mulcahy’s consistent King 40 Soozal out of Pittwater.

Inside North Head, the Super 20s, 30s and 40s enjoyed wave action at the heads with less swell. Top of the Super 40s on IRC handicap is Darryl Hodgkinson’s Carkeek 40 Victoire and on EHC handicap they are second to Adrian Walters’ Little Nico, sailing for the host club. Steven Proud’s Swish is the first MC38 as that class uses the series to prepare for their upcoming national title, March 19-21.

The inshore courses stretched from Manly almost to the Sydney Harbour Bridge and those divisions had a much easier time in 12-14 knots and flat water. The largest Performance Spinnaker and Non-Spinnaker divisions completed two passage races.

Four state titles fall under this year’s Sydney Harbour Regatta umbrella. As predicted, Reg Lord’s Juno is at the head of the J/70 pointscore thanks to three bullets and matching Juno’s unbeaten run in the Yngling state title is Hamish Jarrett’s Miss Pibb. Craig Mitchell’s Centaurus claimed the Cavalier 28 NSW Championship based on today’s one design results.

The two-day series, hosted by Middle Harbour Yacht Club and made possible thanks to on-water support from eight other Sydney clubs, has drawn 187 entries for the 16th edition. Principal Race Officer Denis Thompson was delighted the sun came out and winds moderated from the forecast fresh southerlies. “It was great sailing; everyone had a lot of fun. There wasn’t as much congestion in the harbour this time; we had fleets going to different marks and we made sure they didn’t overlap too much.”

This evening is a chance for crews to unwind and swap tall tales at the MHYC beach party. Racing resumes on Sunday March 7 with decent autumn breeze expected from lunchtime onwards.