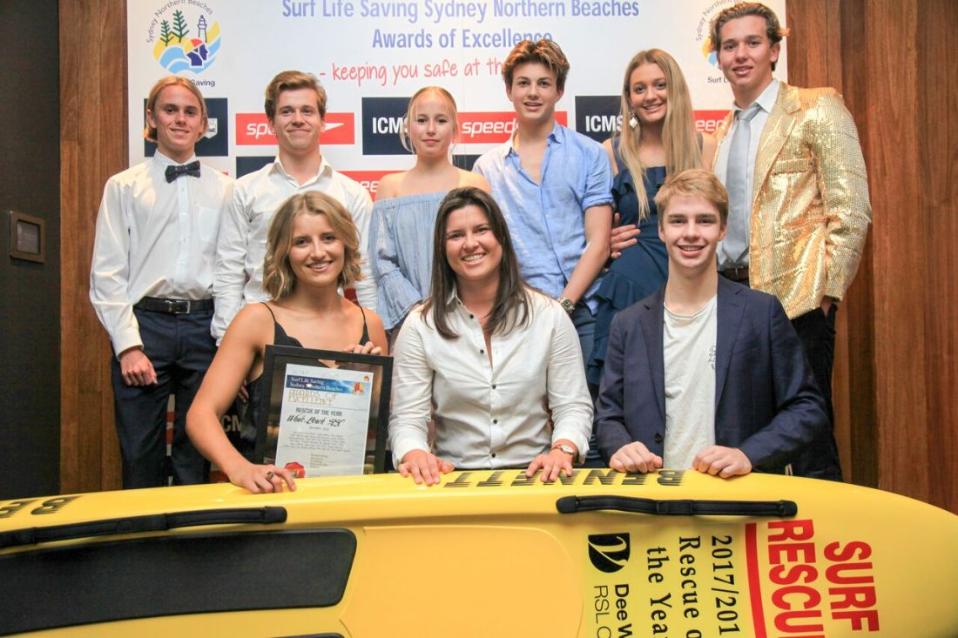 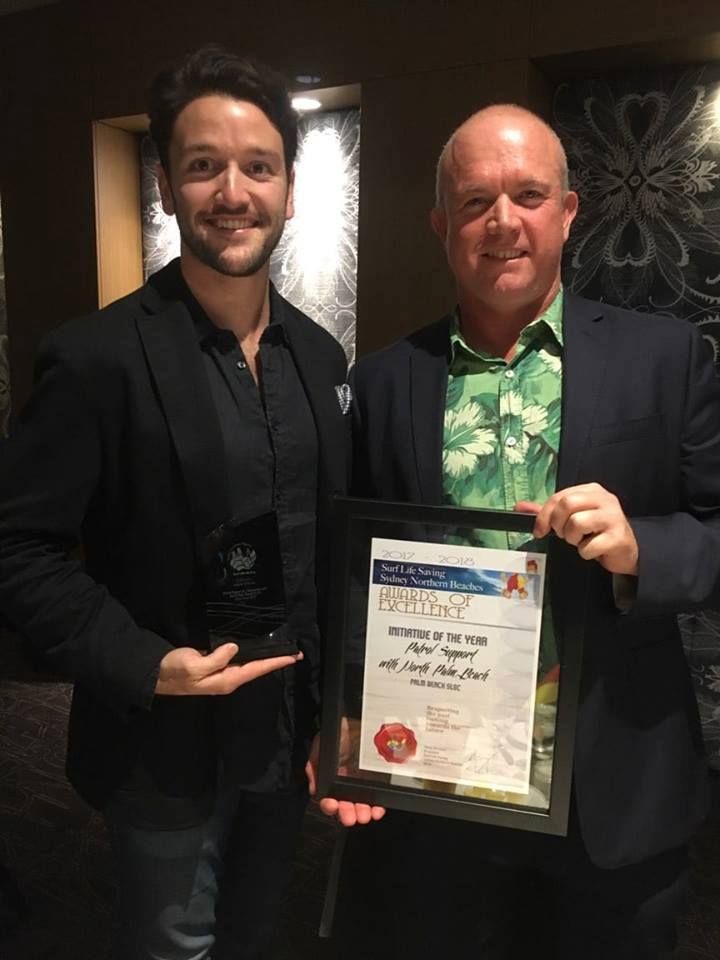 Initiative of the Year: Support of North Palm SLSC 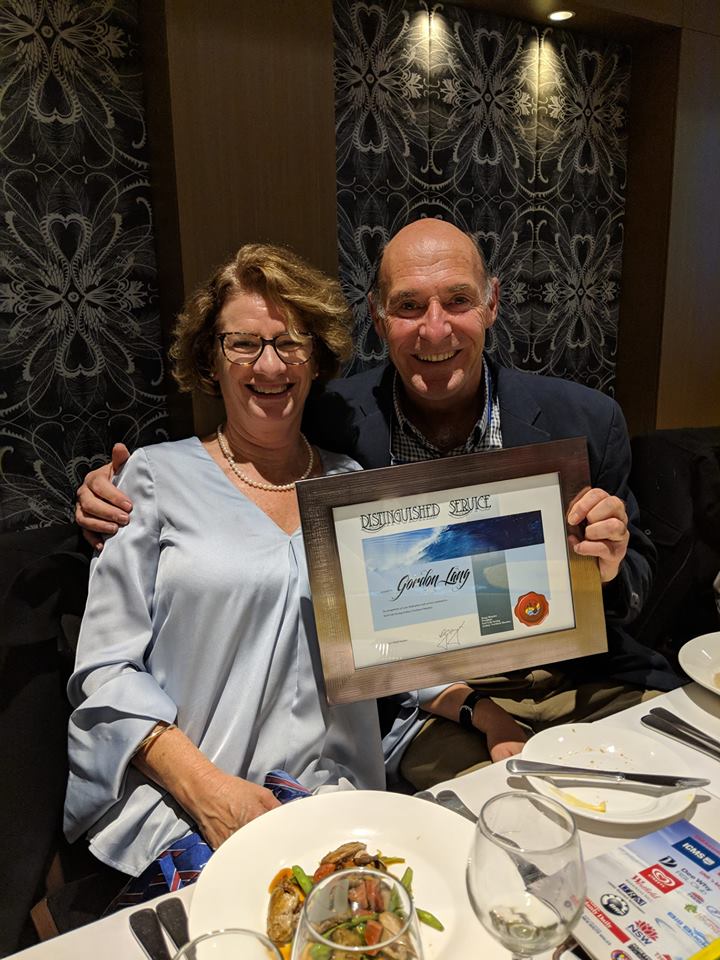 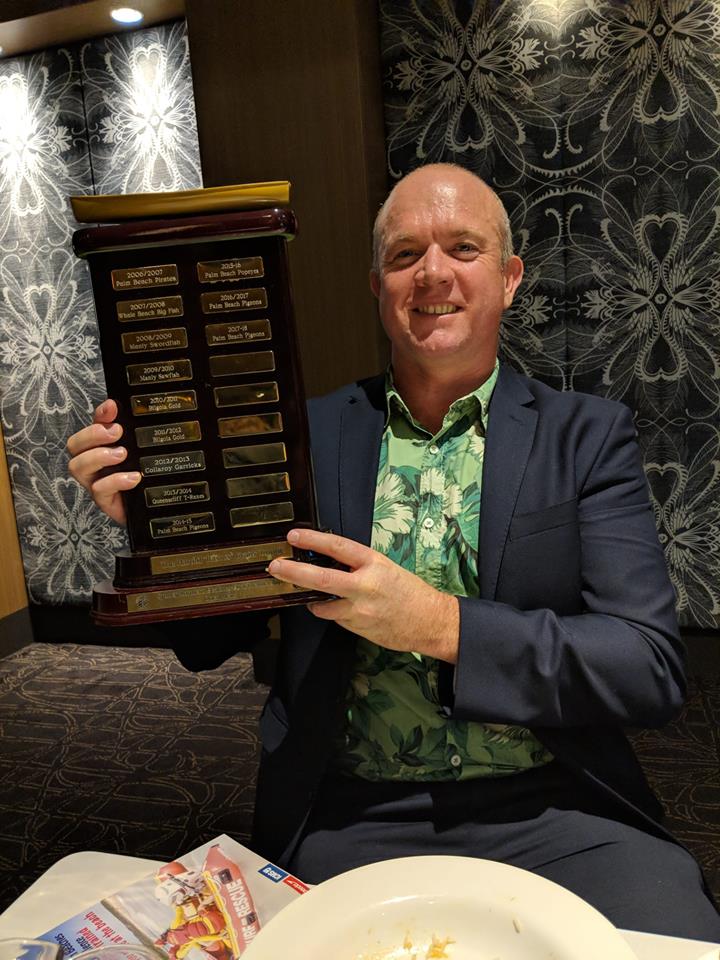 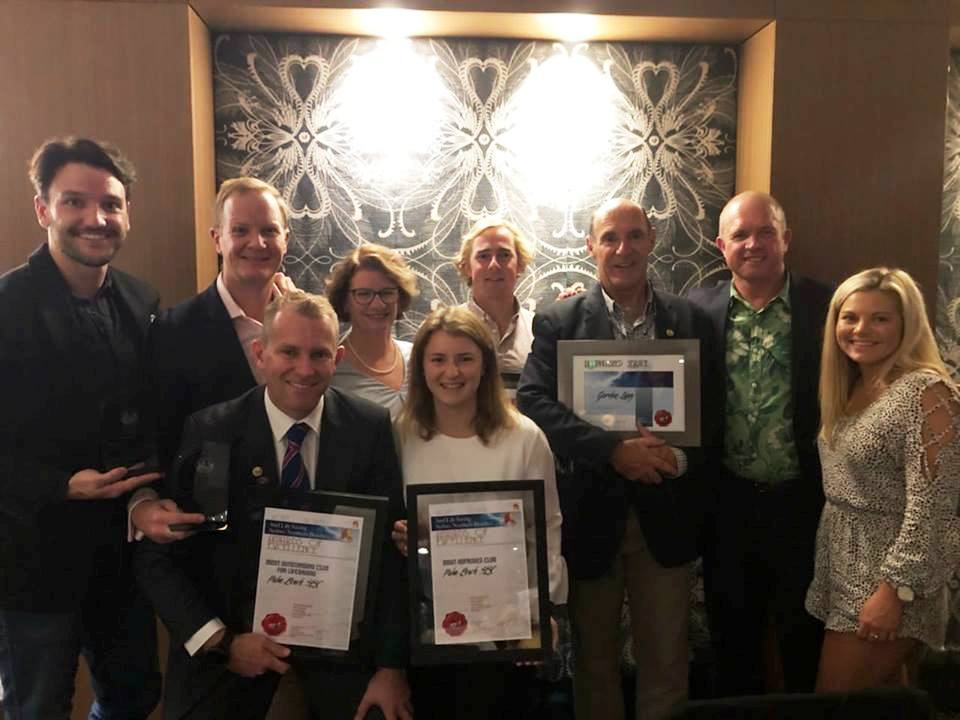 Most Outstanding Club (for Lifesaving)
Avalon Beach Surf Life Saving Club
Avalon Beach SLSC were winners of the inaugural Youth Services Award.
Winners of Community Education Program of the Year for the Youth Networking Program.
Congratulations to our record breaking four boat crews who won the Branch Pointscore this year (best overall in their divisions over all the Branch carnivals): the Chanels, Double Denims, Avocados and Bandits. 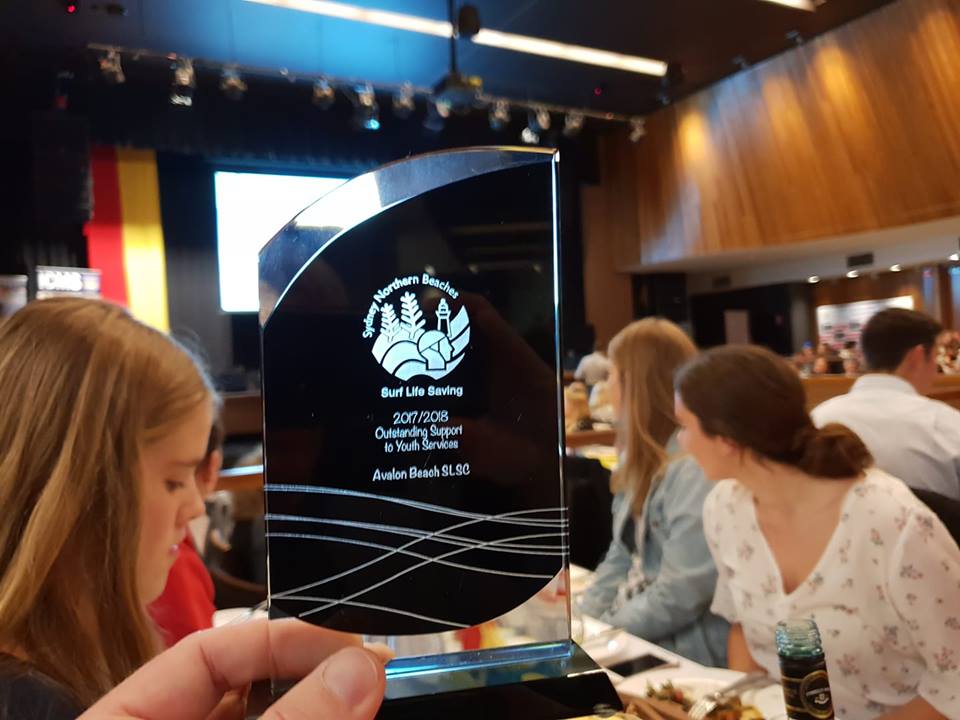 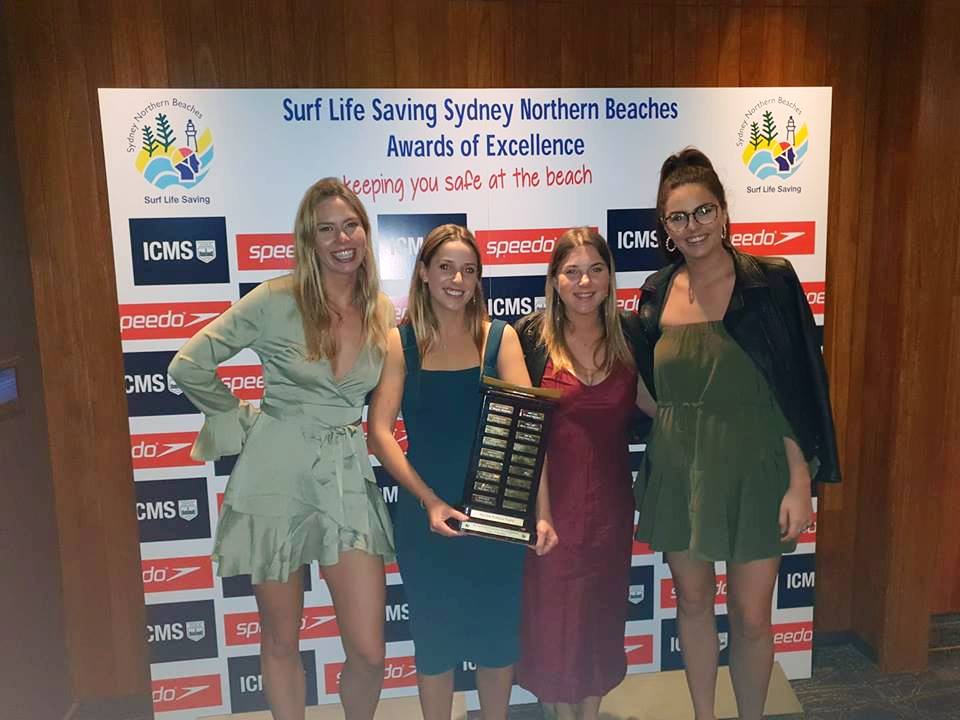 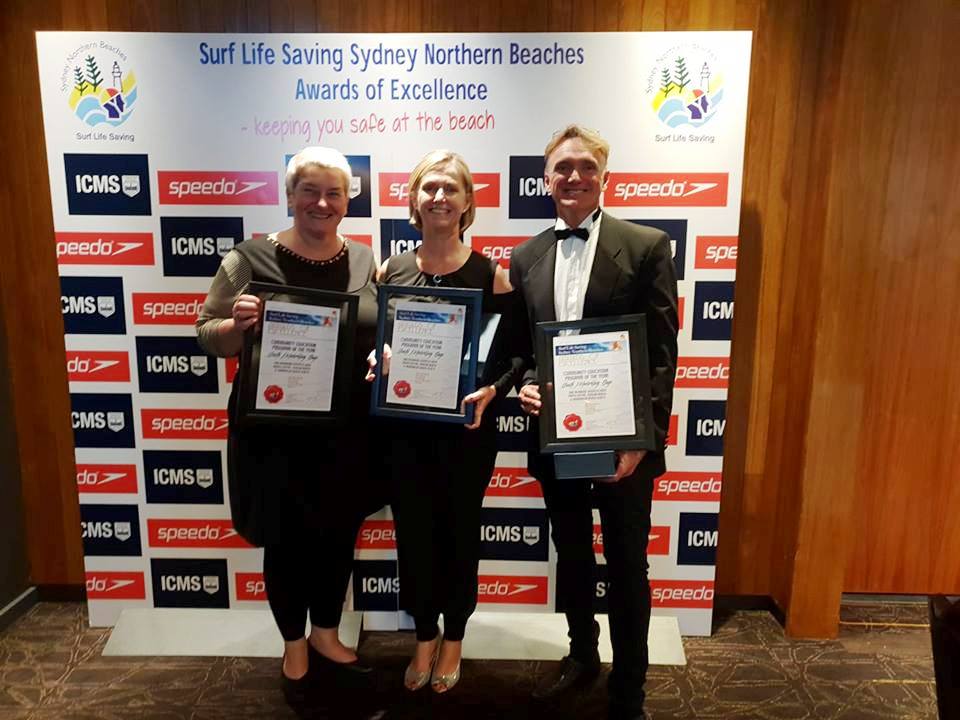 Community Education Program of the Year for the Youth Networking Program
Congratulations Jim Shearer on your Outstanding Service Award at the Sydney Northern Beaches Awards of Excellence for Surf Life Saving. Fiona Roberts (with youngsters at Avalon Beach SLSC) tells us; 'Dad helped start nippers in the 60's and to this day is still very involved with the North Narrabeen surf club.' 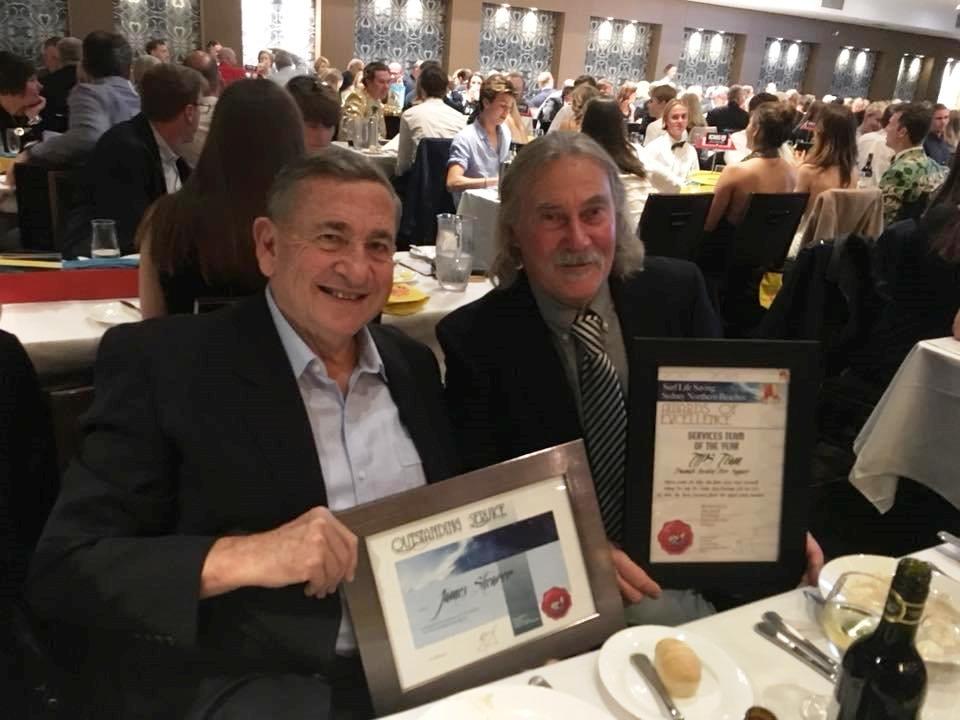 Jim Shearer on left.
Bilgola Surf Life Saving Club Inc.
Patrol 14 wins inaugural Patrol Of The Year - Patrol 14 Captain & Club President, Romilly Madew, accepted the award
Our Kaz Marks was the winner of Competition Official of the Year award.
Kaz Marks also won along with colleagues the Services Team award for the SNB Traumatic Incident Peer Support. Not one but two awards for Kaz Marks at the SNB Awards of Excellence.
Kaz, a member of both Bilgola SLSC and Narrabeen Beach SLSC, was first on stage at Dee Why RSL last Friday night (June 22nd, 2018) as part of that very valuable TIPS team, who received the Services Award.
''While I was absolutely surprised, it was nice to see TIPS recognised for the work that they do,'' said Kaz.
Kaz has been officiating for quite sometime in First Aid, Championship Lifesaver, surfboats but is focussing now on IRB's.
In fact, she's the first female IRB referee with SLSNSW.
Kaz has been a Branch Volunteer of the Year award winner, but this is the first time as Official of the Year.
''When I looked at the other finalists I couldn't believe I'd won it,'' she said.
Also HUGE Congratulations to Bilgola Life Member Dennis O’Toole, made Life Member of SLSSNB. 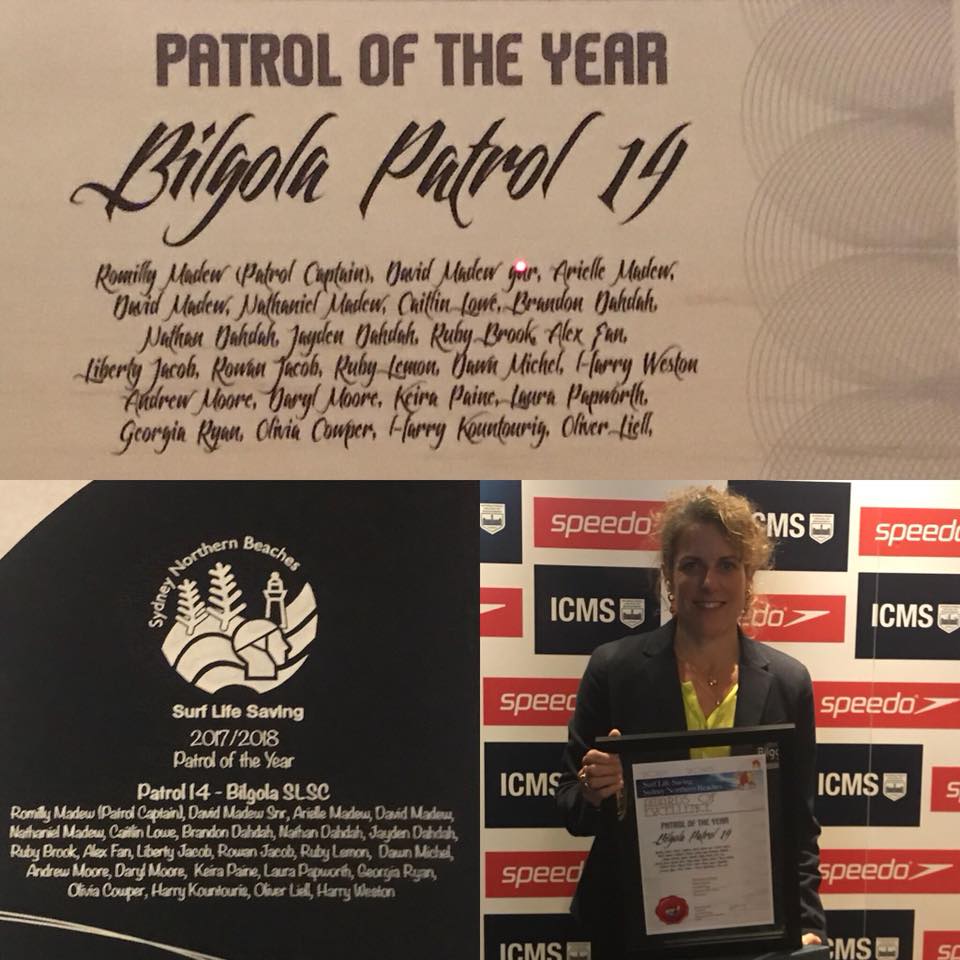 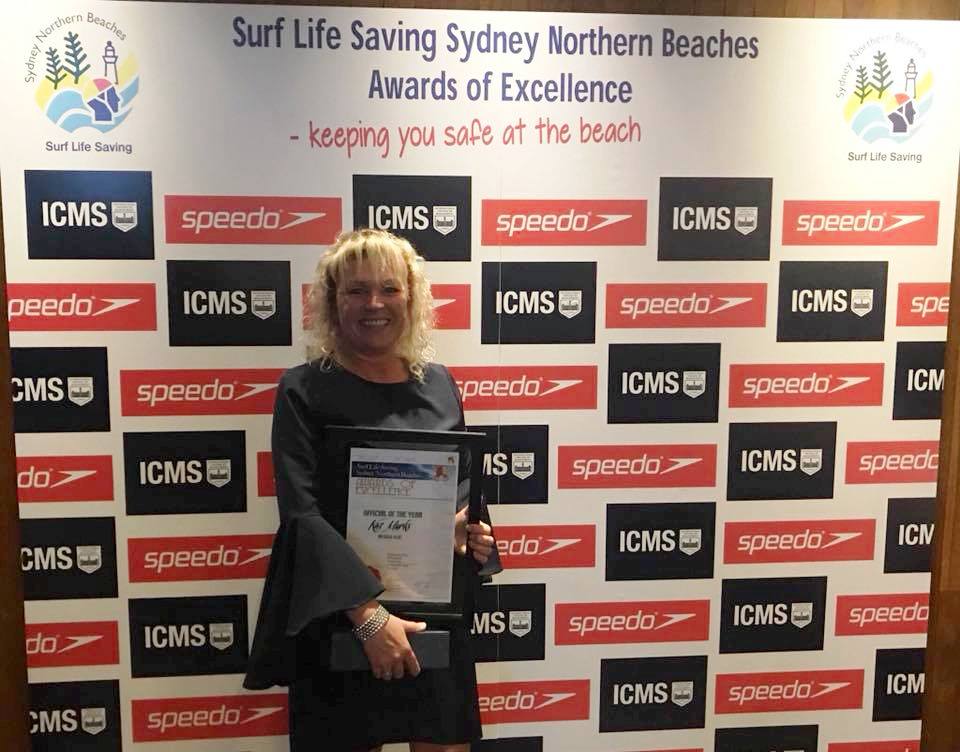 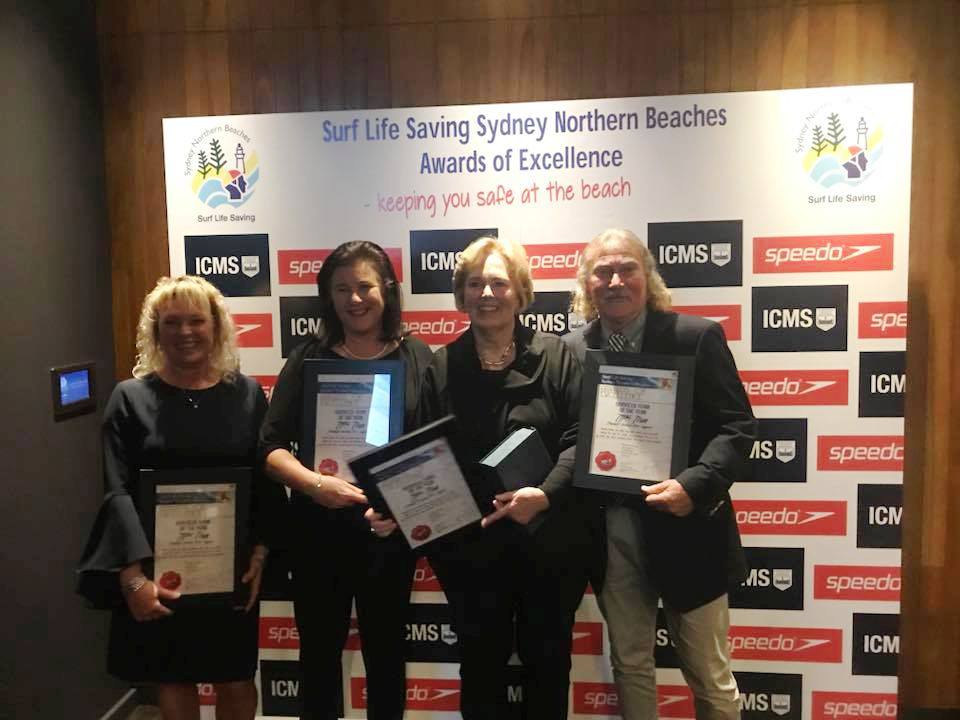 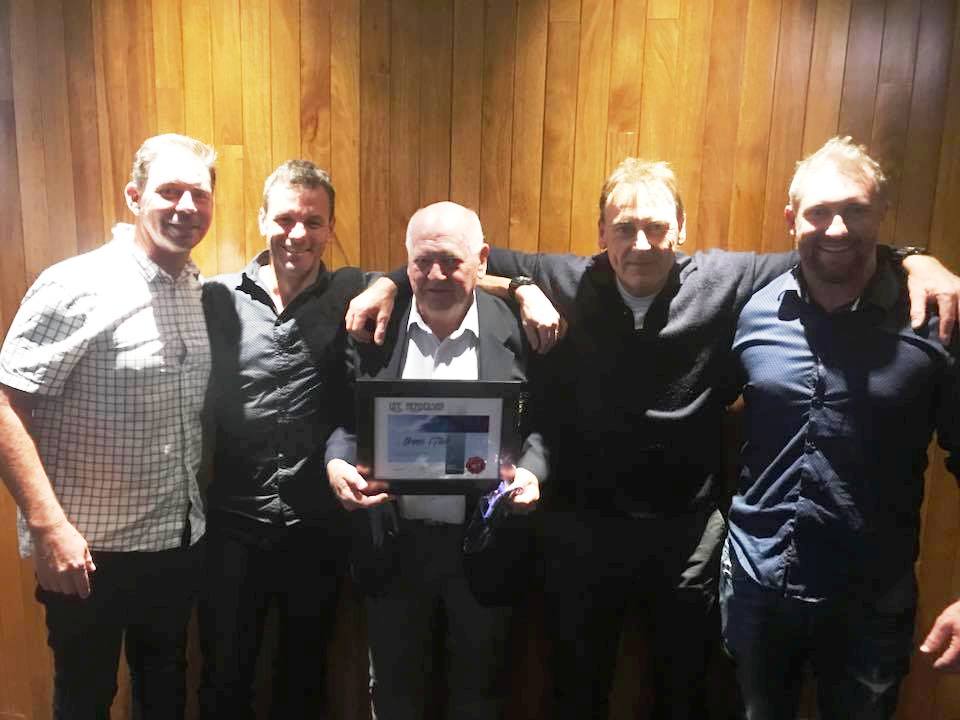 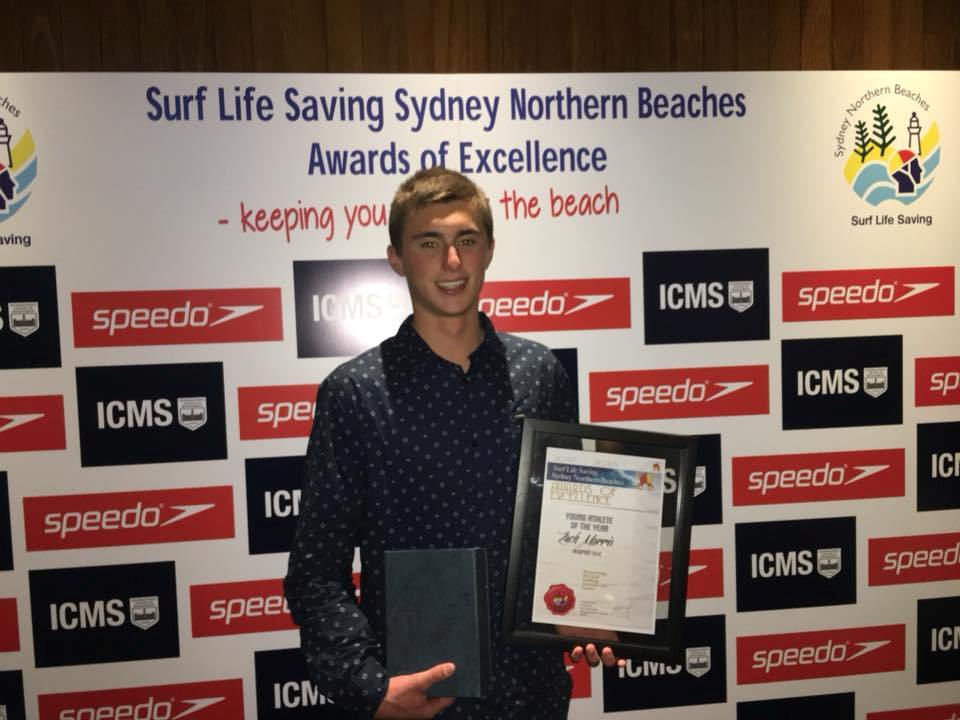 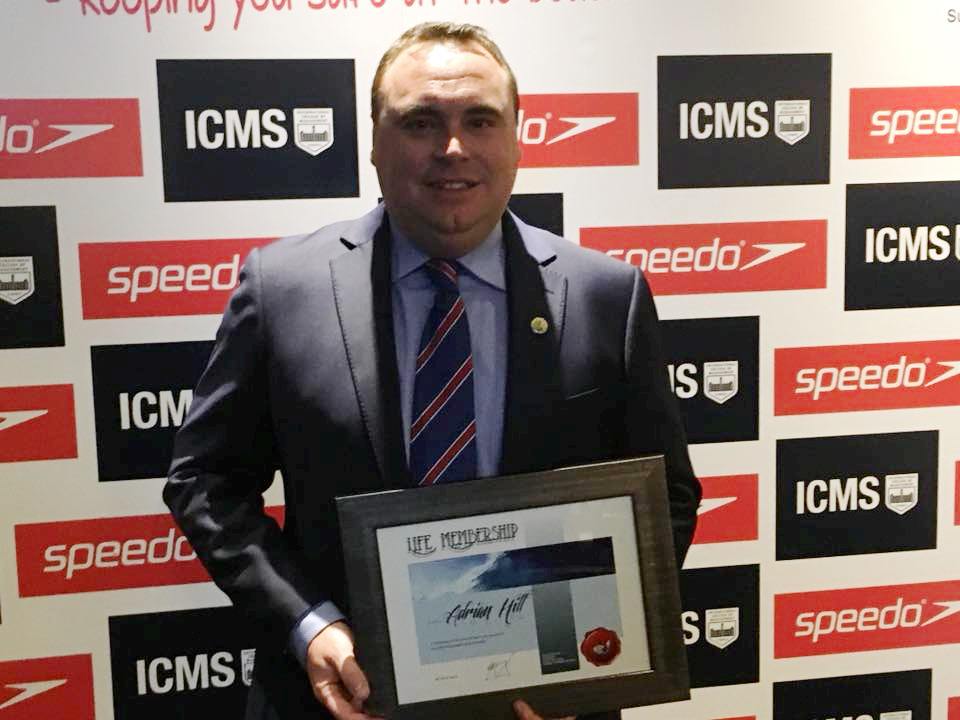 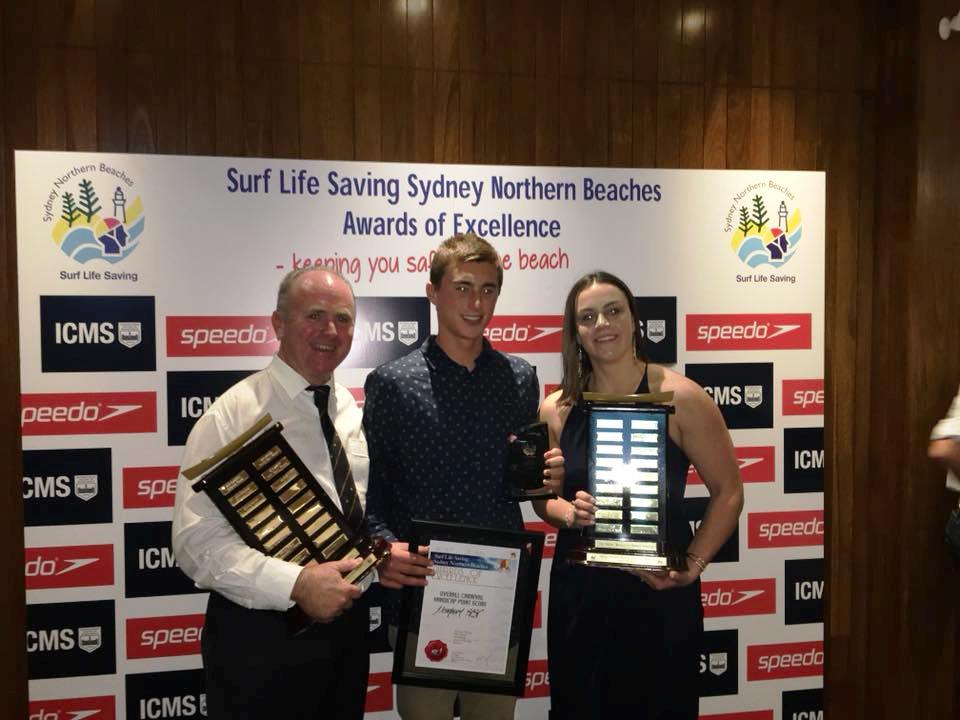 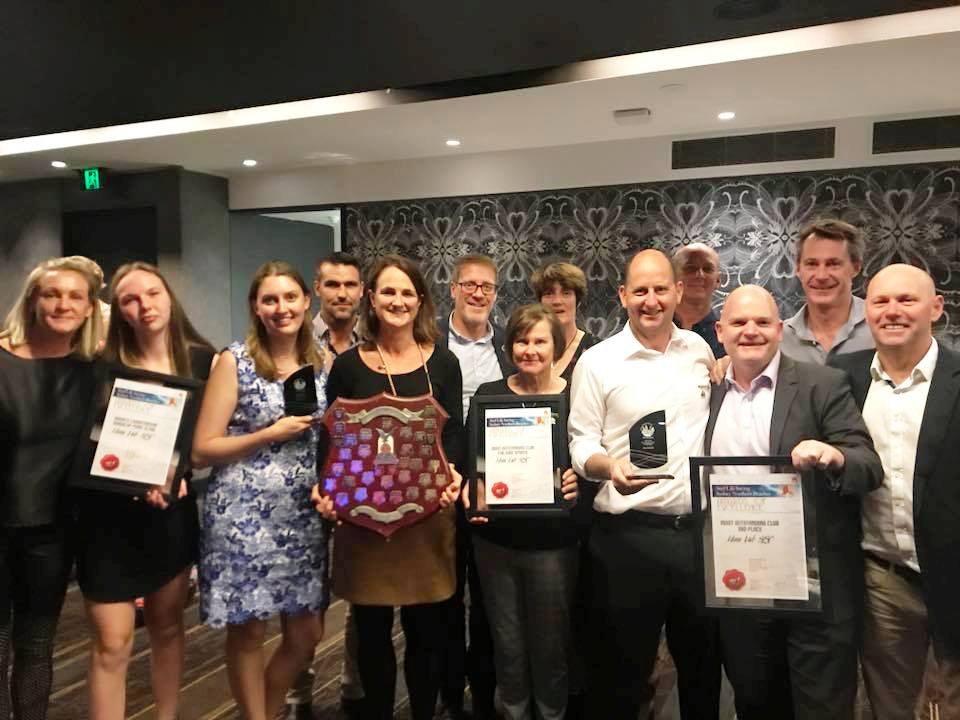 Branch Facilitator of the Year Mike Le Geyt's - South Curl Curl SLSC member.
When Mike was announced winner of the award at the Branch Awards of Excellence at Dee Why RSL Club last Friday night , he was shocked.
''Given the calibre of the education team at Branch and, on the back of being awarded Branch Trainer of the Year the previous season, this was totally unexpected,'' Mike said.
"We are very fortunate to have a really strong, engaged and supportive education team across the Branch.
''What I enjoy most about facilitating and assessing for Branch is meeting members from other clubs and getting a feel for how the different clubs operate across the Branch.''
Mike joined South Curl Curl when his eldest son Sam joined nippers.
Sam is a former Branch Junior Lifesaver of the year. He does patrols, along with his mum Jodi and younger brother Alex.
Mike's wife Jodi is also a Trainer and trained the SRC squad at South Curly last season. 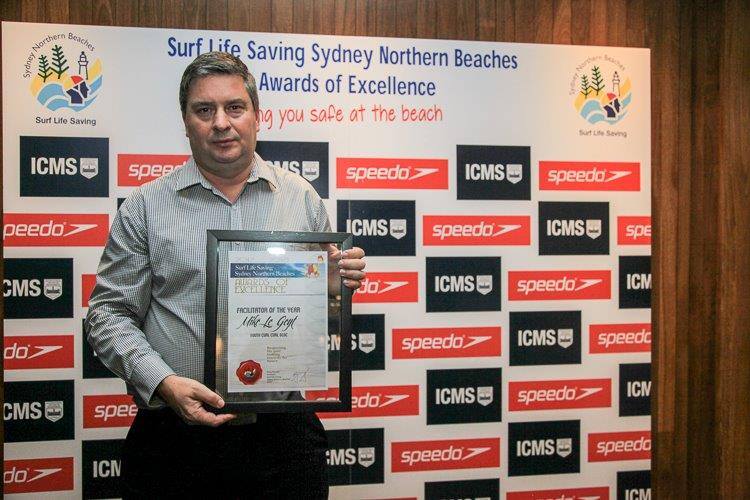 Michael Le Geyt at the awards night: Picture: Vicki Huston
Patrol Captain of the Year Tracey Hare-Boyd North Steyne SLSC
Young Lifesaver of the Year Trae Hare-Boyd North Steyne SLSC
Tracey took out the inaugural Patrol Captain of the Year and Trae was named Young Lifesaver of the Year at the awards function at Dee Why RSL Club last Friday night.
Tracey described this award as very special: ''You are on the beach and having such a great patrol makes it (my job as patrol captain) easier,'' she said.
''But to see your son win such an award is very, very special. It's huge.
''Trae is certainly very good at what he does and doesn't expect accolades. He loves doing what he does in surf life saving. He was also an advisor on the Member Services panel for Junior Lifesaver of the Year this past season.'' 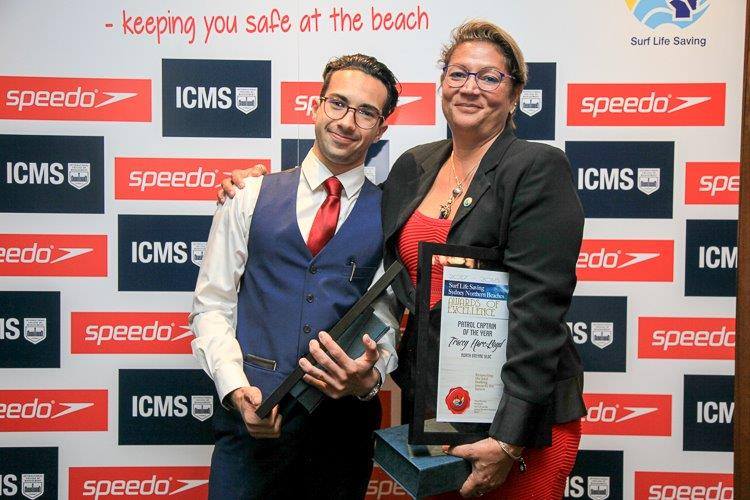 Trae and Tracey Hare-Boyd at the awards night: Picture: Vicki Huston
SNB Branch Coach of the Year Damien Daley  Queenscliff SLSC
a remarkable debut season as a boat sweep.
While the former Australian kayak representative had coached some top notch ski paddlers in the past and was a brilliant ski paddler himself, he did not consider himself as a surfboat coach.
Now he is SNB Branch Coach of the Year.
When he was talked into sweeping and coaching boat crews at Queenscliff SLSC 12 months ago, Damien took on no fewer than five crews.
Two of his most successful crews were the male under 19s who went onto win Aussies in Perth and the female under 19s, who also had a fantastic season and finished fourth in the final at Aussies.
''I wanted crews who were dedicated and liked winning,'' Damien said.
Damien certainly found rowers with the right attitude.
No sooner had he returned from Perth than two of his under 19 boys Richard Ledger and Nick Lesiuk were head hunted by Sydney University Rowing Club and are currently in Korea rowing at a university regatta.
Damien said he was excited about next season, especially as his girls crew will have another season in under 19s. 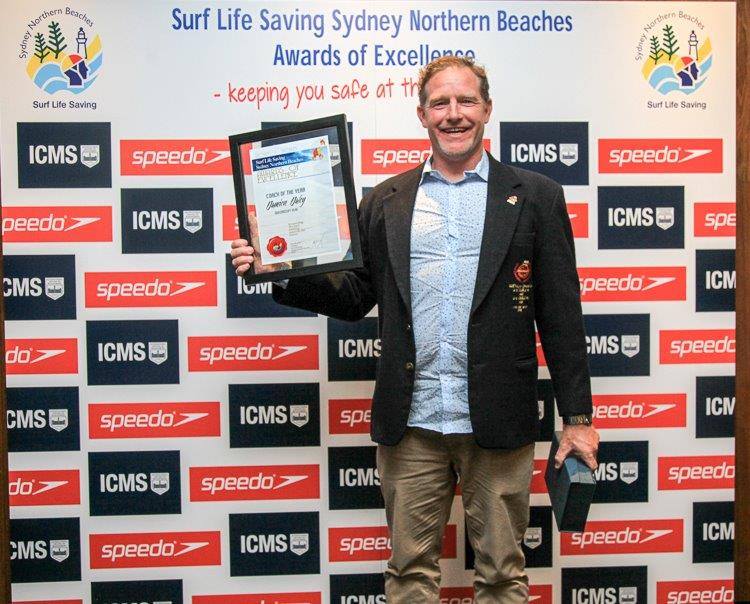 Photo: Damien Daley at the SNB Awards of Excellence. Picture: Vicki Huston.
SNB Branch Lifesaver of the Year: David Price Freshwater SLSC
David Price spent a lot of his early years growing up in country NSW.
Even when he attended high school in Sydney and then spent time living on the Central Coast, the beach life still escaped him.
But he made up for lost time when he got married, settled in Allambie Heights and his kids became involved in nippers at Freshwater SLSC.
''That's the closest I'd ever been to a beach,'' he said.
Once he did his Bronze Medallion, surf life saving had roped him in.
He became heavily involved in the IRB's, both for his club and SNB Branch.
He's an IRB trainer and Bronze trainer.
But he's also Sydney Northern Beaches Branch Lifesaver of the Year.
''Astounded,'' he said.
''Even to have a nomination was a surprise.
''I thought there were people head and shoulders above my achievement.''
He did 105 hours on the jet ski for the Branch last season and 80 patrol hours for Freshie.
He's proud as punch of daughter Caitlin who was rookie Patrol Person of the Year at Freshwater SLSC.
''She also won Branch Rescue of the Month for March (2018),'' he said.
''She is heavily into surf life saving.''
David is now off to the SLSNSW Awards of Excellence as one of the finalists for NSW Lifesaver of the Year. 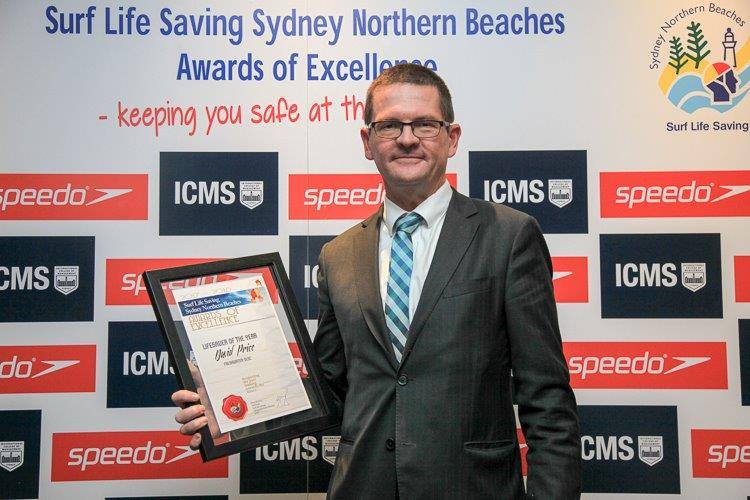 Photo: David Price at the SNB Awards of Excellence. Picture: Vicki Huston.
Branch Volunteer of the Year David Cowell North Steyne SLSC
To receive Surf Life Saving Sydney Northern Beaches Branch Volunteer of the Year once is a great honour but twice in a row is something very, very special.
For North Steyne SLSC member David Cowell such recognition means a lot.
''Recognition of our members is the most powerful tool our club and surf lifesaving movement has for volunteers,'' he said.
''I am very humbled to again be the recipient of this award.
''It is an honour to be recognised for something that I love doing each year with a fantastic group of people.
''It has been very special as we have seen our Ripper Nipper program expand to 36 kids and their families with acceptance and inclusion being such a large part of what we do. We now see SLSA rolling out an inclusive beaches program that we have been a part of.
''As a Patrol Captain, nothing makes me prouder than having my sons on the beach with many of their peers that I have had the privilege as their Nippers Age Manager, see become exemplary young adults keeping our beach safe and accessible each summer.
''We do this with all of our members and families, continuing to broaden the appeal of surf life saving within the North Steyne SLSC tribe and our broader community, all on one of the best beaches in the world.
''This is an award I share with, especially my family for all their support, the North Steyne SLSC members and all of the families that have contributed to a phenomenal 110th anniversary season.'' 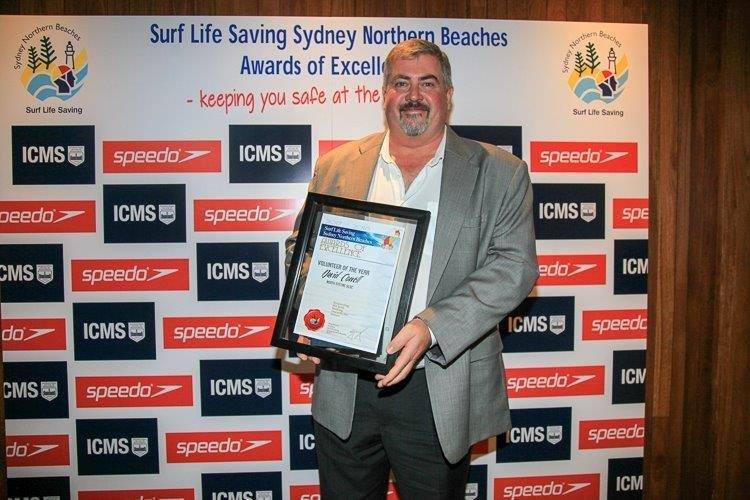 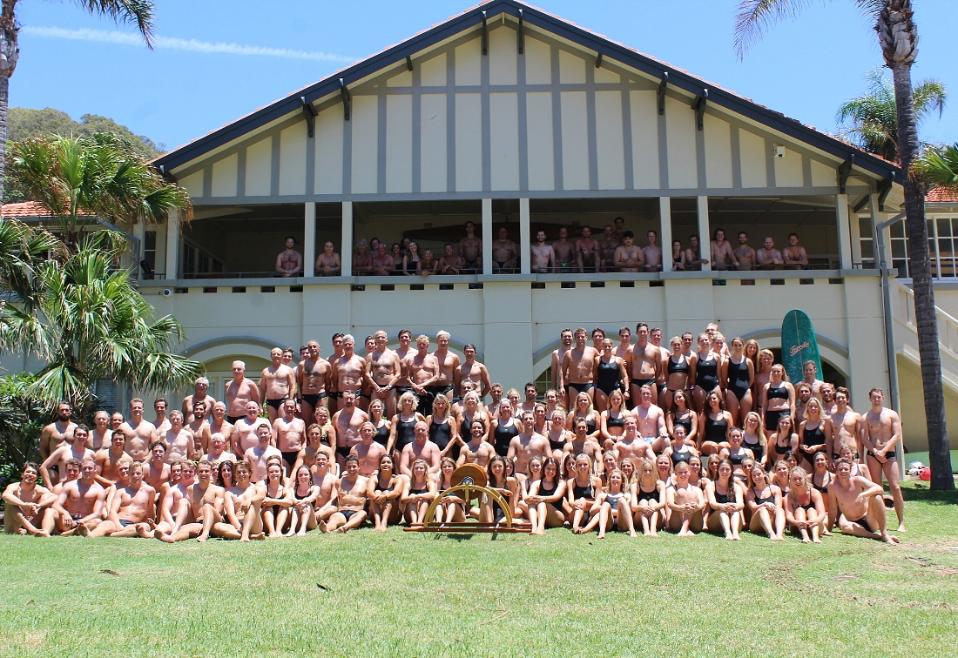