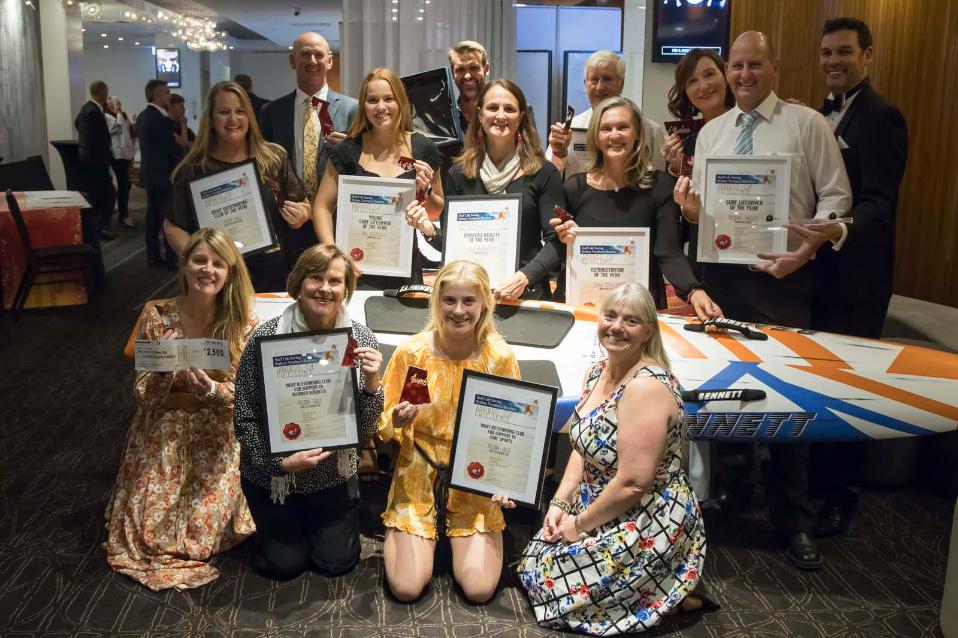 I would like to acknowledge and recognise this group of six men, who do and have in the past done a lot, much of which is behind the scenes. However, it must be said their work benefits many and sometimes their labour of love can be taken for granted.

These retired men come to the SNB Branch office every second Thursday and more frequently in the summer months attending to any gear maintenance and repairs.

They tackle anything, from minor tent repairs to fixing the plumbing. They keep the surf sports gear in top condition and help out with the surf school gear during busy periods. And should the warehouse become a little messy, it is soon clean once the general gives the orders. " Mr. Menzies said.

The 2019 SLSSNB Awards of Excellence, held at Dee Why RSL on June 21st, are the premier event for honouring and recognising outstanding contributions during the Season by Branch.

"Our 5,989 patrolling members delivered a professional surf lifesaving service across our 21 beaches from Manly to North Palm Beach during the 2018-19 season." Mr Menzies said this week

Whilst roles, systems and standards are key to making it all happen, the human values of teamwork, passion, commitment and caring layered on top of that core framework is what makes us and what we do very special.

We will continue to manage our beaches from Warriewood to North Palm Beach without paid lifeguards on weekends and have negotiated a new Deed of Agreement with Northern Beaches Council on how we jointly manage water safety on all of our beaches.

I would like to thank council for their support to surf lifesaving. This year we have seen funding from all levels of government but, in particular, we thank council not just for the funds but also their heightened support to SLSSNB to allow for the redevelopment of clubhouses at Mona Vale SLSC and Long Reef SLSC. We have also had funding promised for the redevelopment of Manly LSC."

This year's Awards must be counted as a standout for Mona Vale SLSC.  Mona Vale won nine awards with Michael Wasley and Zali Beuzeville being named Westfield Lifesaver and Young Lifesaver of the Year respectively.

Ross James was rewarded with ICMS Branch Trainer of the Year, Kris Monnock was a very popular choice as Speedo Masters Athlete as was Paula Tocquer in being named the Northern Beaches Council Administrator of the Year. 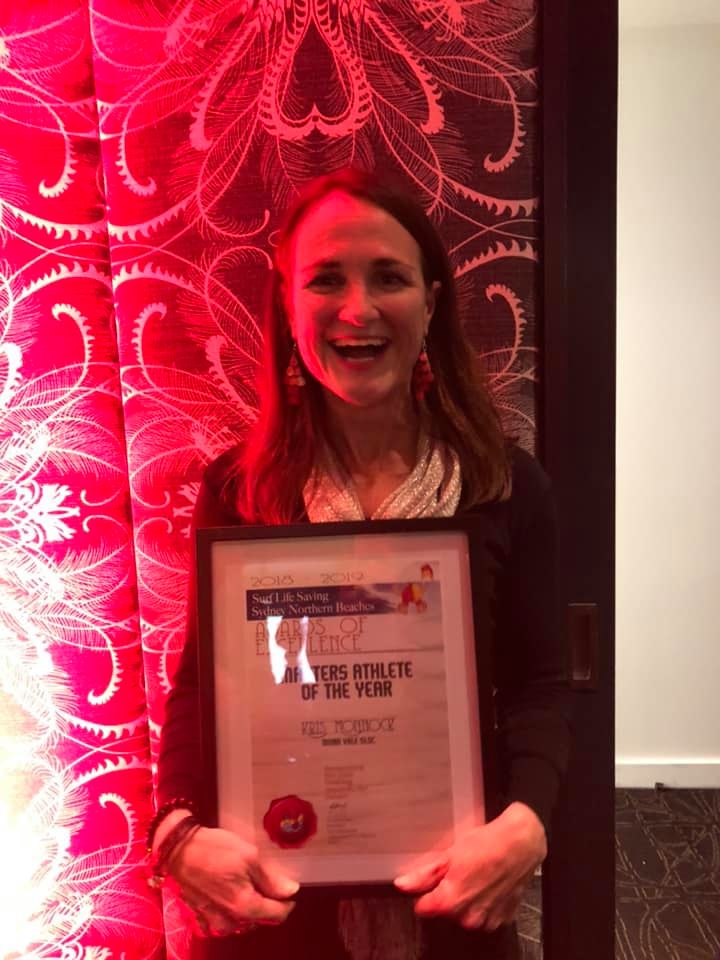 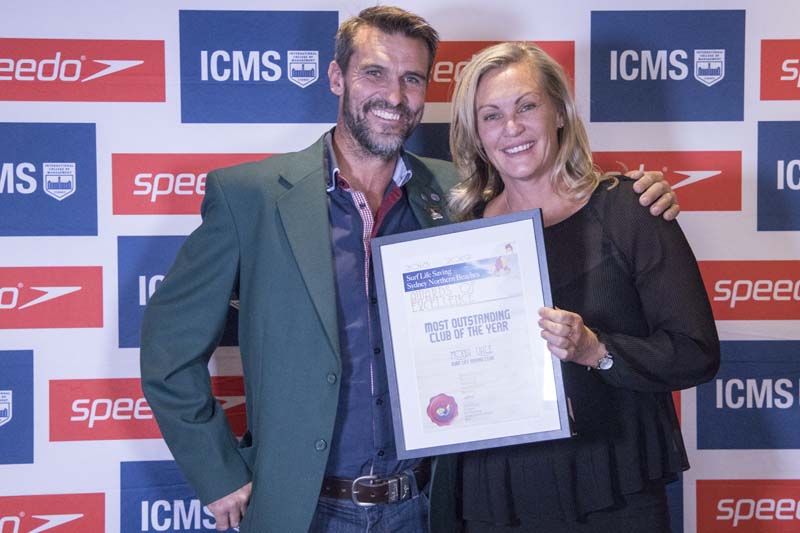 "I can only thank my members for these great results,’’ Bryce said.

"Way beyond expectations. We have individual winners but it is really a club thing and I am proud of all my members of the club. I am just a representative of 1200 members of my club and I am really grateful that I could represent them at the awards.

"Most Outstanding Club is a real thrill for all our members. We have great patrols, patrol captains and lifesavers, we have great competitors, we have great trainers and there are those who man the barbeque. I can’t thank my whole club enough for the members’ contribution.

"This award (MOC) represents us as an entire club. And clubs are made up of many different people from different areas and when they come together you have a really good season and that’s what we had.’’

Construction of the new and long awaited clubhouse for Mona Vale is expected to commence in January.

"We’ve been working with council that it all works out well for us and the community,’’ Bryce said this week.

"My dealings with the council has been really fantastic. I can’t praise the council enough and also the State Government for their support of our club.

“I can’t praise the Northern Beaches Council CEO Ray Brownlee enough. He’s a great guy and a real visionary when it comes to supporting local clubs.

He understands not just what surf clubs but all clubs mean to the youth and general population of communities.’’

Kieran Menzies (Newport SLSC) won the ICMS Facilitator of the Year award, while Newport Members Kieran Menzies and Peter Finch were recognised as part of the SLSSNB RWC training program which won Services Team of the Year, their U23 Women’s boat crew “The Thunder” won Surf Sports Team of the Year, Lance Barnes was awarded SLSSNB Distinguished Service, and congratulations to all the Newport Patrols who were assessed in the Branch Audit this season - Newport won first place in the SLSSNB Branch Patrol Assessment.

Mike Le Geyt (South Curl Curl SLSC) who was the Facilitator of the Year last year was recognised again this year in a different role, for that of ICMS Assessor of the Year. South Curl Curl were also the winners of the ICMS Most Outstanding Club Education. 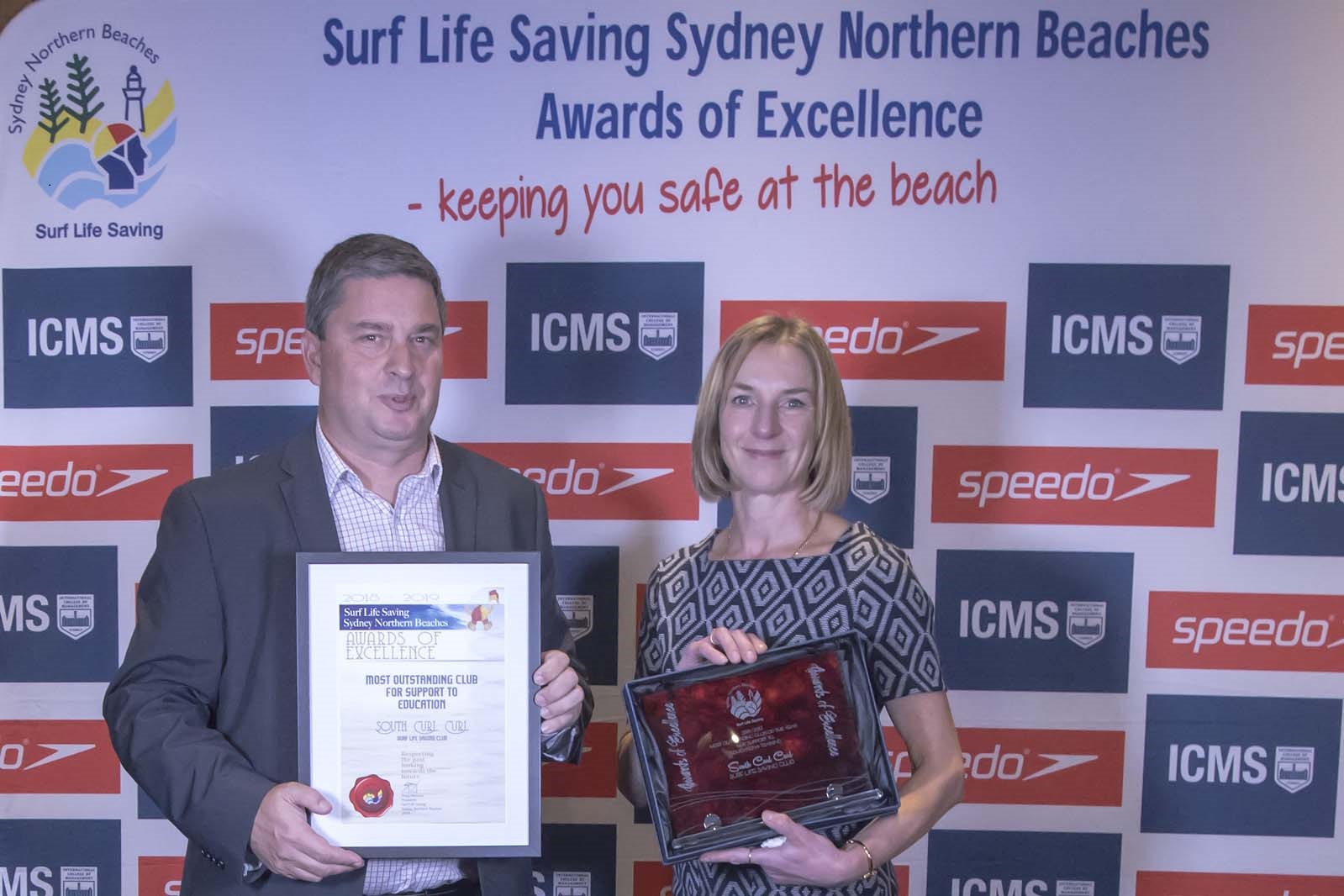 South Narrabeen SLSC took out the ICMS Community Education Program of the Year for their outstanding Beach to Bush Program while their President Martin Hayward was announced as the Northern Beaches Hospital Volunteer of the Year.

Warriewood SLSC were judged the Most Improved Club in the Branch and weer also recognised with an Award of Excellence for Support to Youth Services. Great work by President of Warriewood Jen Spencer and big support from the Wazza team are doing great things. 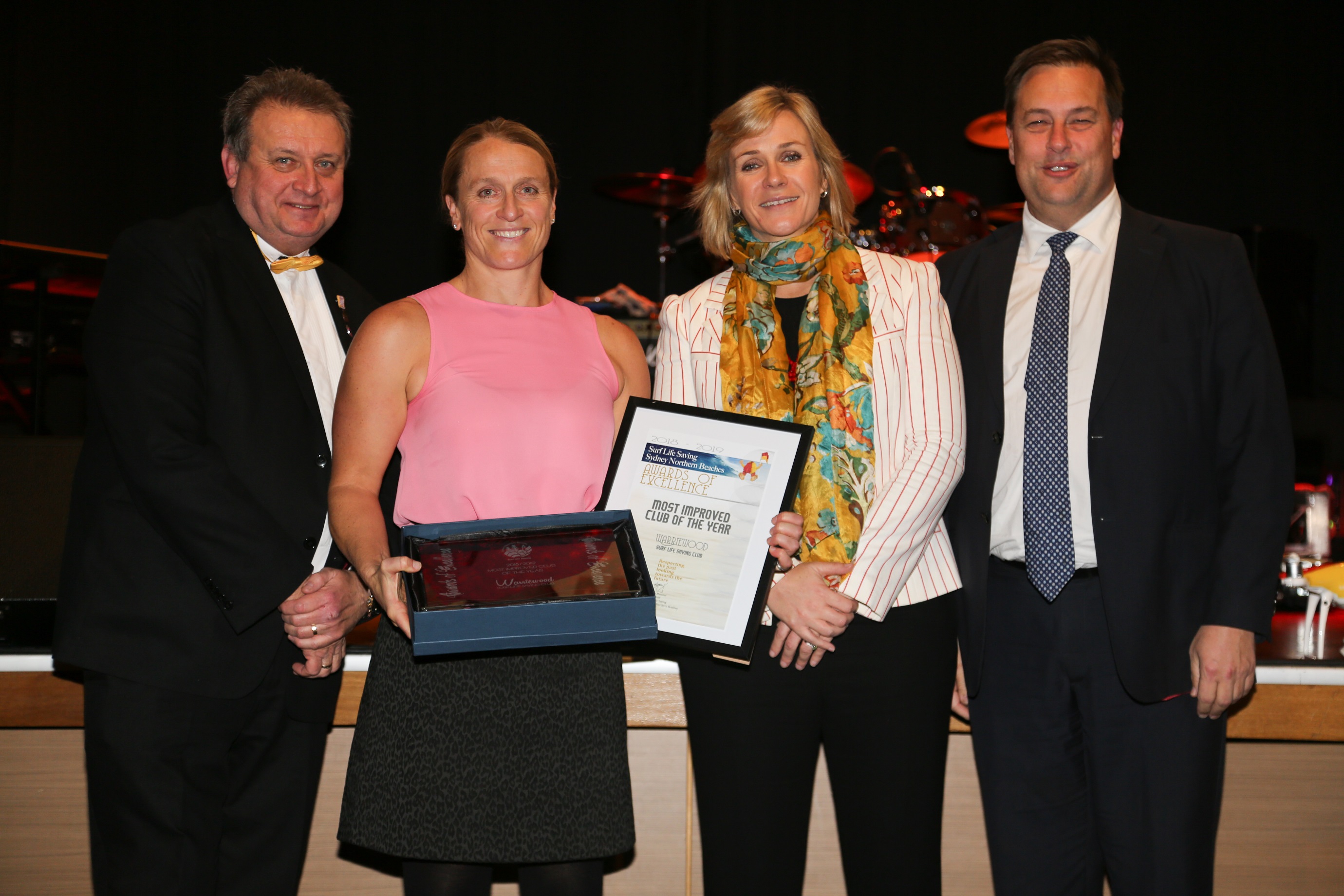 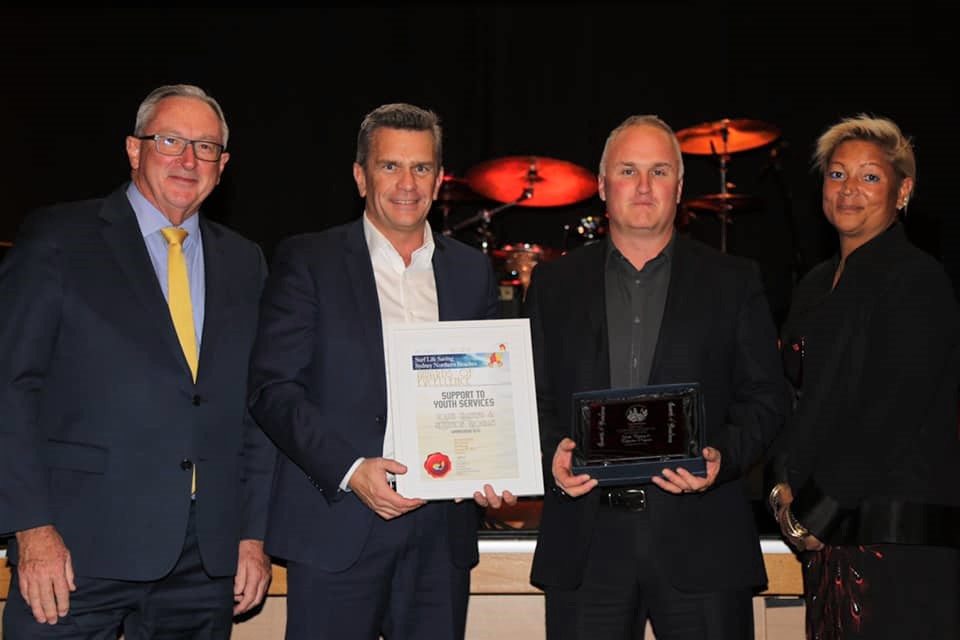 Dee Why SLSC's Shaun Stacey was named Coach of the Year. Shaun joined Dee Why SLSC six years ago as a boat sweep ‘’fill in’’.

‘’I just went there to help out as the club had a problem,’’ Shaun said.

In April this year he guided the Dee Why men’s open boat crew to a sensational victory at the Aussies on the Gold Coast.

There was a second success story for Dee Why SLSC at the awards with Orange resident John Collins taking out the Dee Why RSL Patrol Captain of the Year. 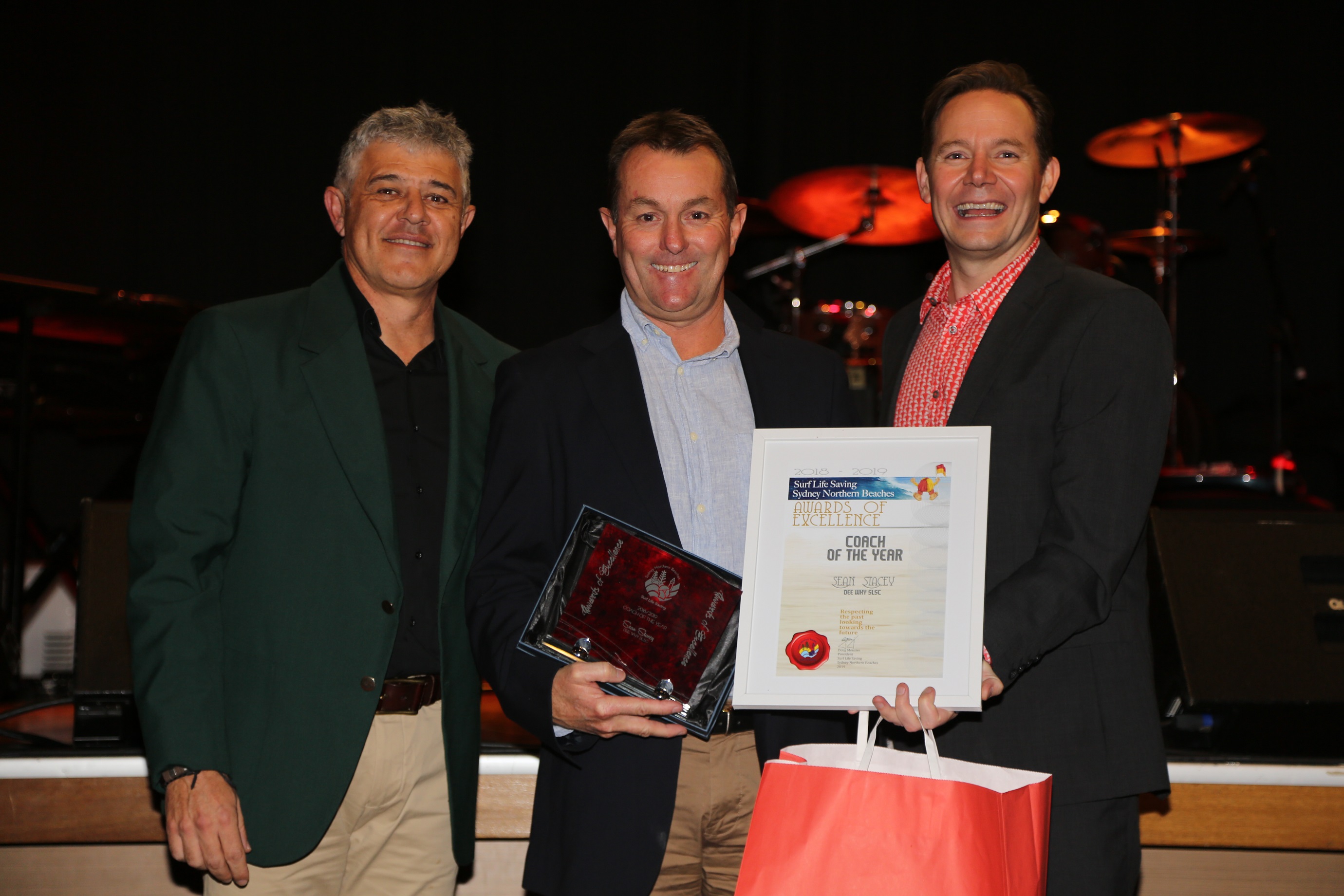 This year their 'Building Bungan' won the Innovative award for 2018/19 season. As a club they also managed to place in the overall point score from inspections/assessments and will now receive funding next season for the hard work and quality life savers they have on patrol.

The hard work put in by Bungan members has most certainly paid off and put Bungan on the map!

One of the highlights of the evening was the standing ovation given to Newport SLSC Member and Branch President Doug Menzies who was awarded SLSSNB Life Membership at this year's SLSSNB Awards of Excellence. 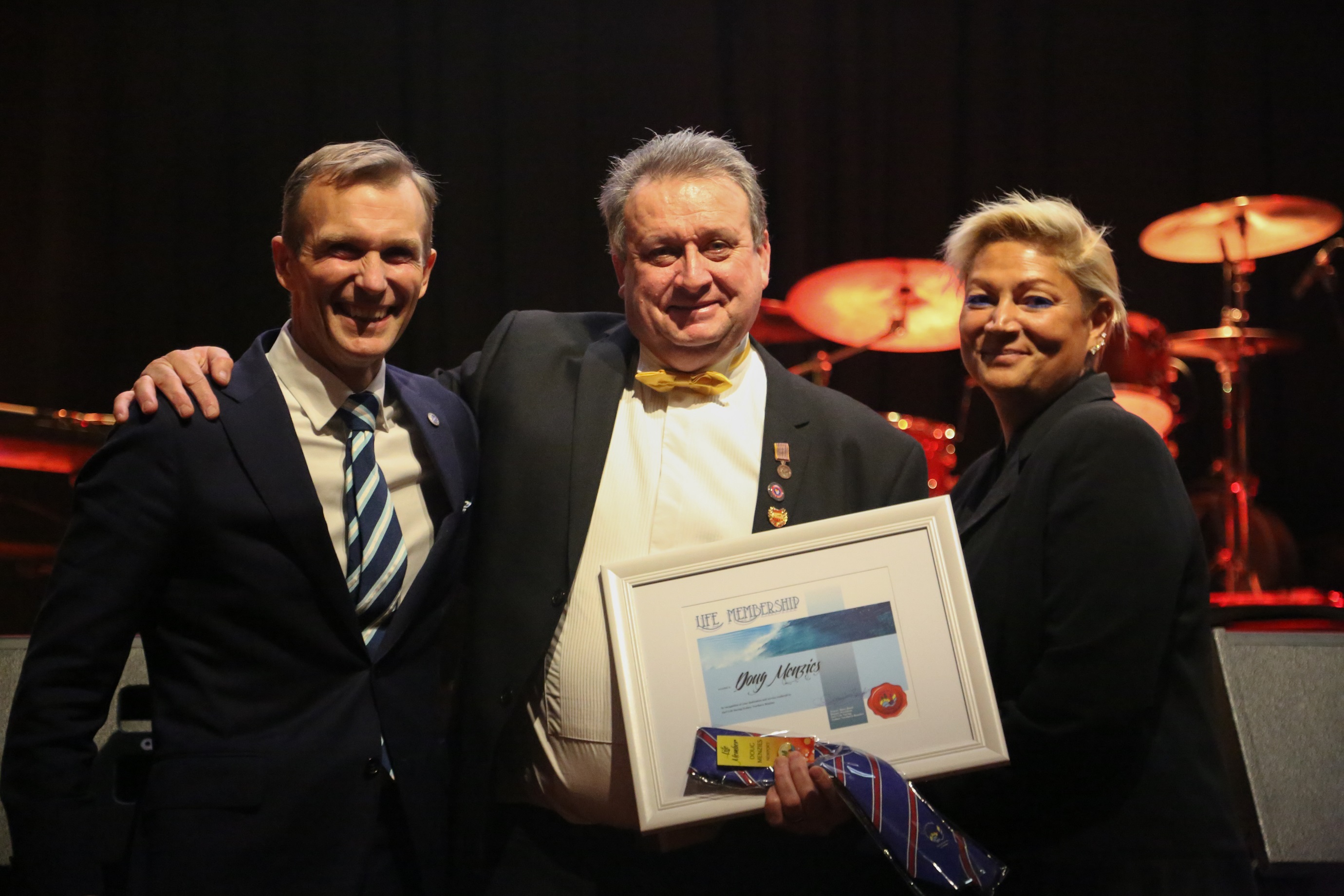 Another highlight of the evening was SLSSNB Life Membership being awarded to photographer Bill Sheridan at the 2019 SLSSNB Awards of Excellence. Bill's photos of Branch carnivals and others across Australia over many years are a record for the ages as much as bringing a smile to many with his great shots.

North Palm Beach SLSC's Geoff Raper was also recognised for his long term investment of time and energy in the surf life saving movement with Life Membership, a great recognition of his work and that of his club.

"Congratulations to all winners and to those who were nominated." SLSSNB President Doug Menzies stated this week,

"A number of our Branch winners now advance to the SLSNSW Awards of Excellence, to be held in Sydney on August 31. Good luck to those finalists.

It would be remiss of me not to mention three Directors, Shannon Job, Lance Barnes and Glenn Tolan, who are moving on. Thank you for your contributions and shaping our Branch as it is today."

It was great to see local Councillors, State and Federal MP's at this year's awards again too. Whether presenting the Certificates of Recognition at Branch's annual Awards of Excellence or trudging beside and with all those who patrol our beaches during the Season, staying in touch with a movement whose members range from 5 year olds to 85 year youngs is being part of that democracy that happens on the sand! 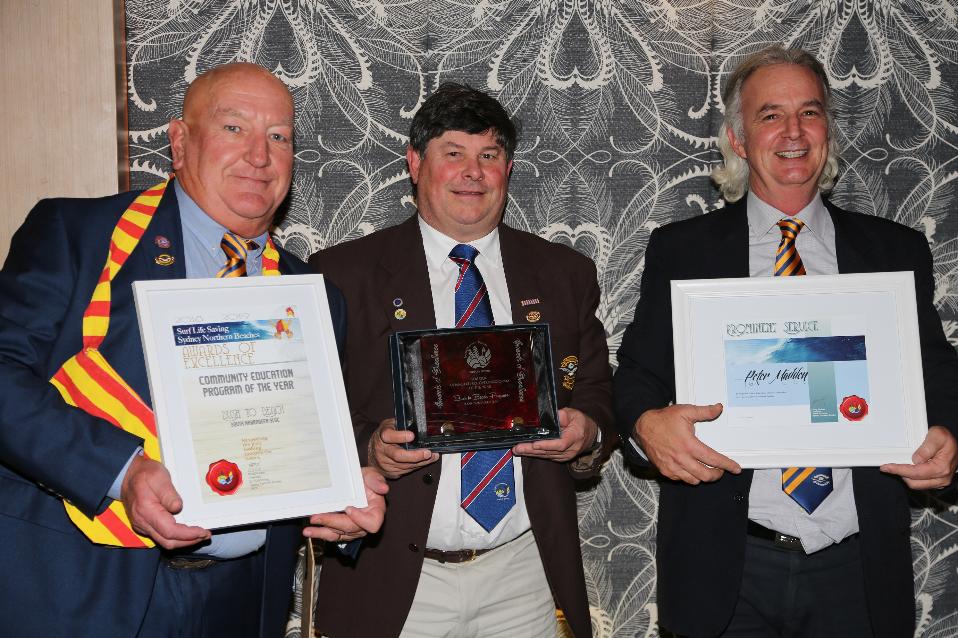 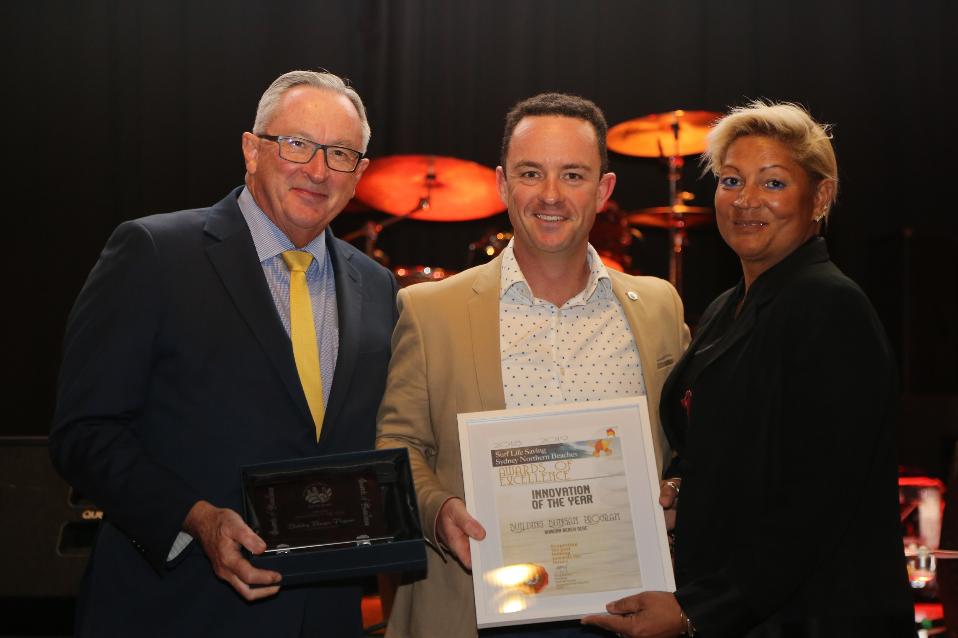 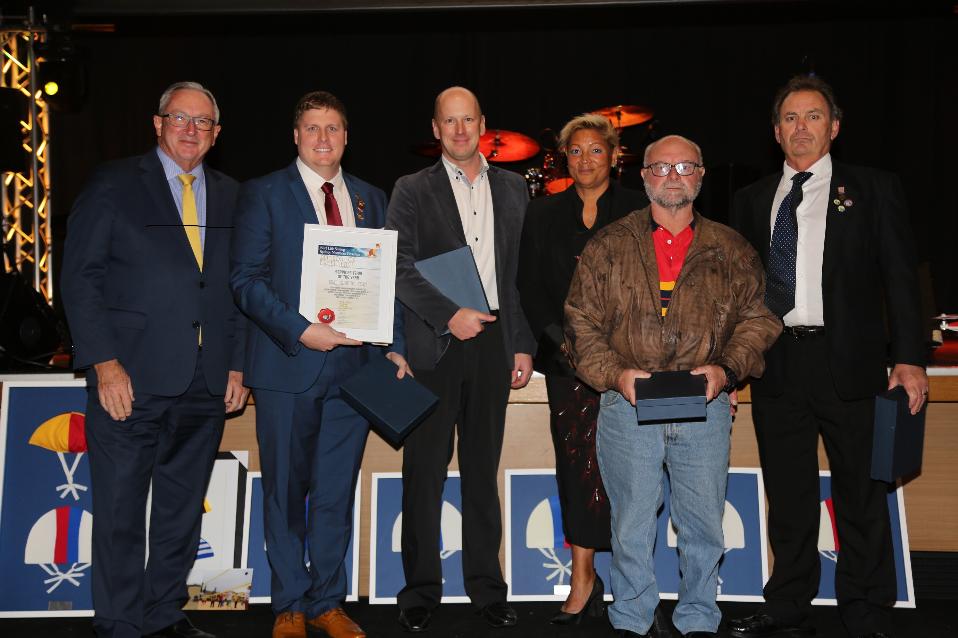 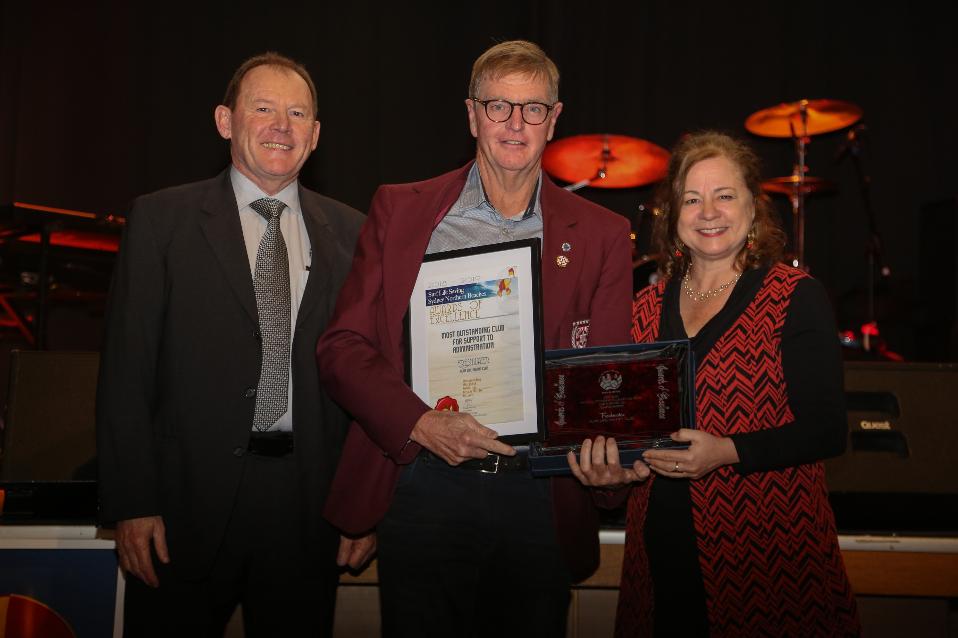 Most Outstanding Club for Support to Administration - Freshwater 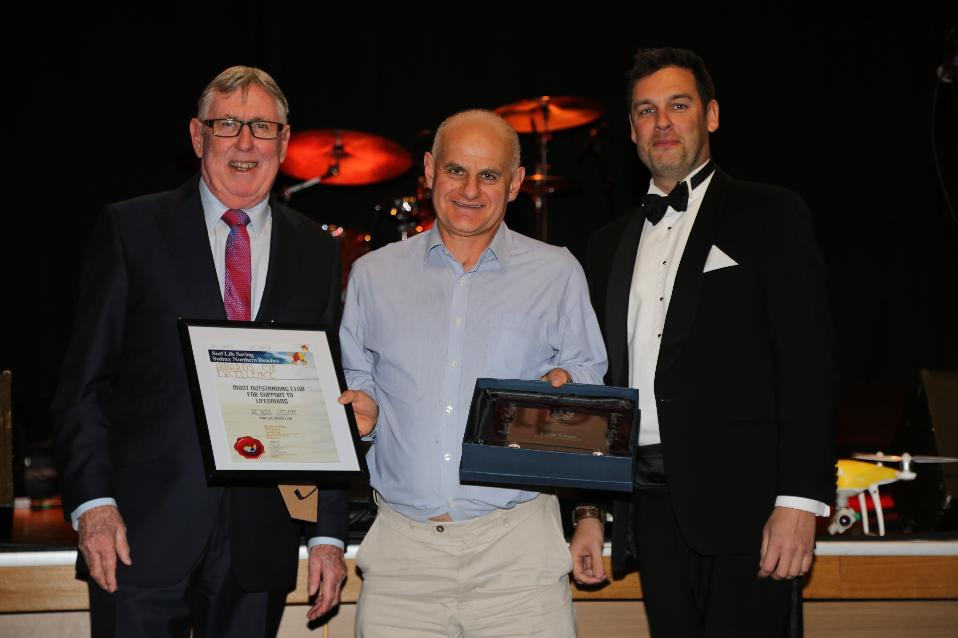 Most Outstanding Club for Support to Lifesaving - North Steyne 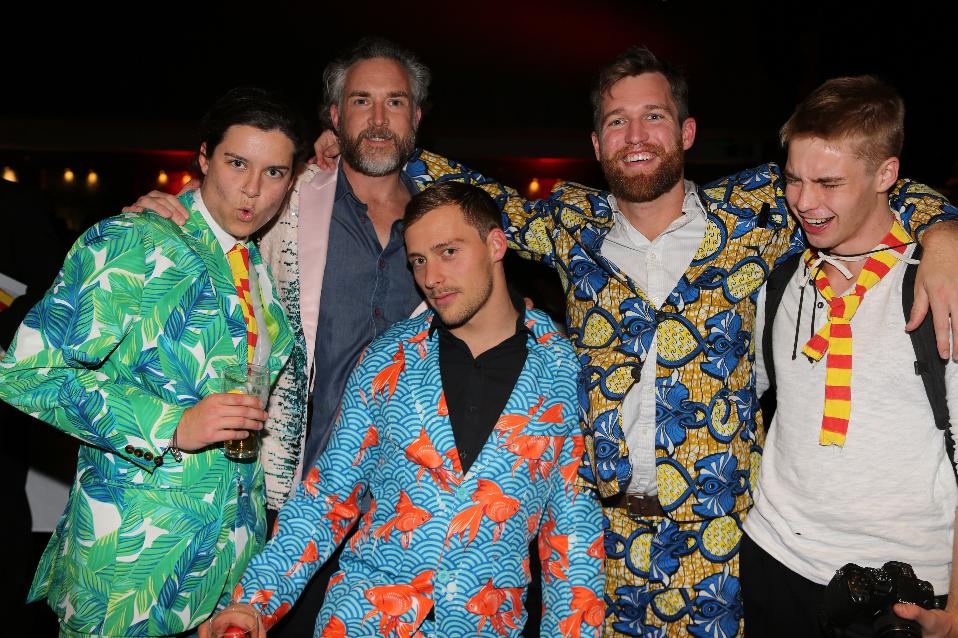 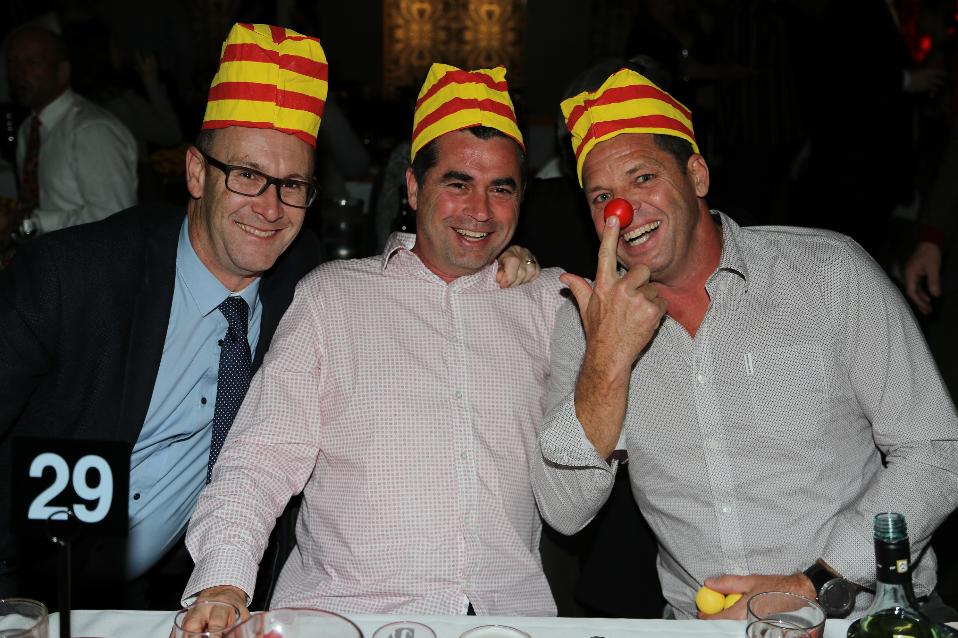 Some of the 'nicest smiles/hats on the night'!