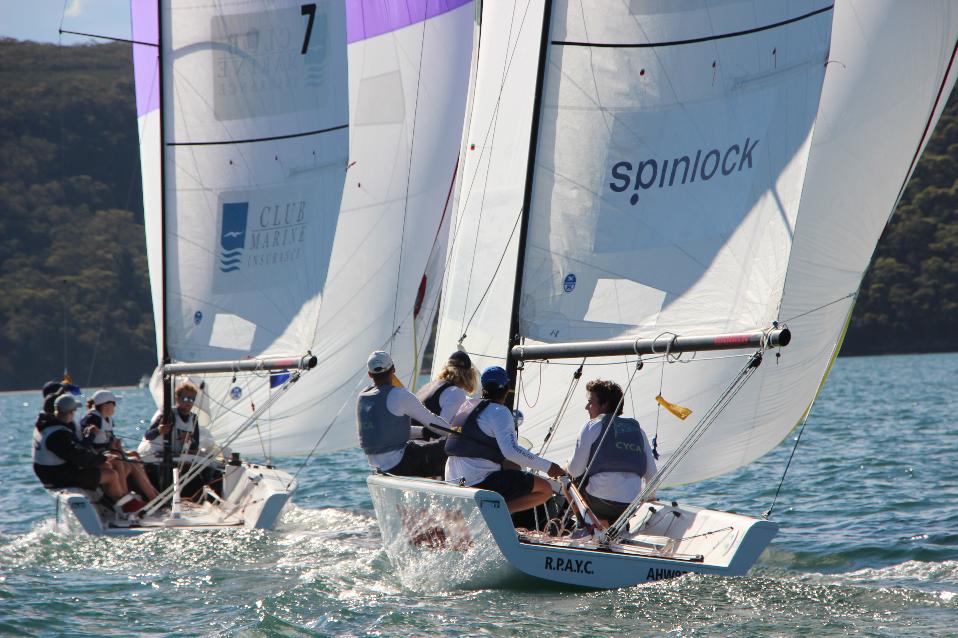 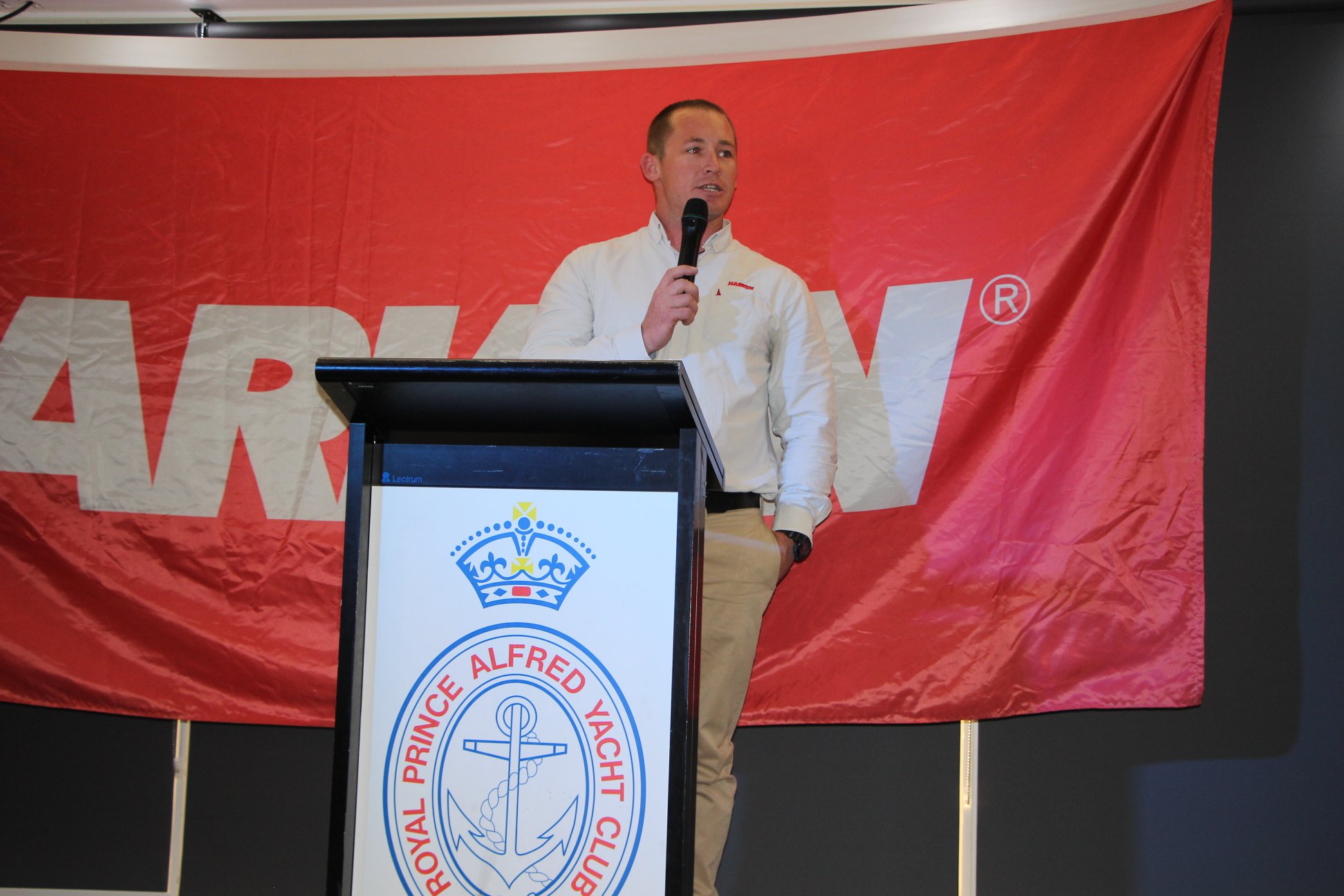 World number 20 and the bookies favourite Matt Whitfield representing Penarth Yacht Club, Wales, said he was confident his newly established team could come together to get the top prize “We are really looking forward to getting out on the water, being able to wear shorts and a t-shirt at this time of year is amazing”.

After both youngsters and adults alike managed to snap a picture with Tom, Ky and the trophy, they were all inspired by both of their unique challenges and accomplishments as they listened to the top sailors in not only Australia but the world.

MC Tom Spithill asked both Tom and Ky whether he sees these kinds of high-profile events, particularly the Harken, as a breeding ground for future emerging stars stepping up into the big league, to which Tom Slingsby commented “Absolutely, Kinley Fowler our teammate on SailAus GP is a good example, he has now got his name on both the Sail GP and the Harken ‘Rockin Robin’ Trophy”.

The in-depth Q & A style session was a valuable asset to all the sailors present, with the key points of setting a goal and never ever giving up, combined with the more hours on water the more an athlete will develop their skills.

SailGP is not just about racing at high speeds in 50 footers, they have launched their ‘Inspire” Program for grassroot sailors. Slingsby proudly announced that for Sydney in February 2020 the Waszp Class dinghy will be involved in a pre-race event on Sydney Harbour followed by the SailGP event. SailGP believes that sailing should be truly accessible to all, which is a mentality the RPAYC also believes in. Through SailGP Inspire Learning, young people can get a real taste of the sport with hands-on lessons, mentorship and team building. This is learning by doing, and a step towards skills that last a lifetime, regardless of experience. Inspire learning introduces students at local host venues to sailing as well as the science behind the sport.

For the 50 Harken Competitors out on Pittwater the opportunity to compete in the club’s fleet of Elliott 7 Keelboats and get their names engraved on the trophy is the goal.

Harken’s Australian Managing Director, Grant Pellew, says: “We’ve sponsored the regatta for a long time now. For me personally, I’ve always enjoyed being out there watching all the racing, even before I started at Harken and I feel it is a privilege to be a sponsor of it.

“I like watching all the young sailors coming through; a lot have gone on to bigger things, such as the America’s Cup, SailGP, Volvo Ocean Race, offshore racing, Olympic Games, or joining the World Match Racing Tour. It’s not just the sailing side either; a lot of others have gone on to work in the marine industry and made a name for themselves in the top jobs,” Pellew ended.

Results after 2 day's of racing at the Harken International Youth Match Racing Championship show Alastair Gifford and his Royal New Zealand Yacht Squadron (RNZYS) team remain on top with 14 wins. Sitting in 2nd place is Matt Whitfield and team representing Penarth Yacht Club with 10 wins and 3 loses. Tied in 3rd place with 9 wins and 4 loses are the 2 teams from The Royal Prince Alfred Yacht Club - RPAYC skippered by Juliet Costanzo and Alistair Reid.

After two round robins of racing at the Harken International Youth Match Racing Regatta on Pittwater, the top four teams have been identified.

The Royal Prince Alfred Yacht Club's teams skippered by Alistair Read and Juliet Costanzo have snared two of the four spots in the semifinals, finishing tied 3rd and 4th  respectively on 12 wins.

On getting into the top four a happy Costanzo commented “We (the girls), are really enjoying sailing together. We are not phased on who we get paired up to race against tomorrow, as we feel like we have a good shot at the three higher placed teams!”

“We are hoping that our fellow club members come out and cheer loud for both Alfred’s teams, so we can capitalize on the home team advantage!” commented a spirited Costanzo.

The semifinals and finals are scheduled to take place tomorrow (Sunday 24th November), with racing getting underway at 1000hrs.

Tonight Alastair Gifford, as regatta leader will have the luxury of picking his opponent for the semi finals.

The finals will be available on live stream through Facebook at: https://www.facebook.com/royalprincealfredyachtclub/

For all details, please visit the official website: www.intyouthmatchracingchampionship.com.au

Live Results can be followed at: https://www.matchracingresults.com/2019/harken-international-youth-championship/

By Di Pearson and RPAYC Media 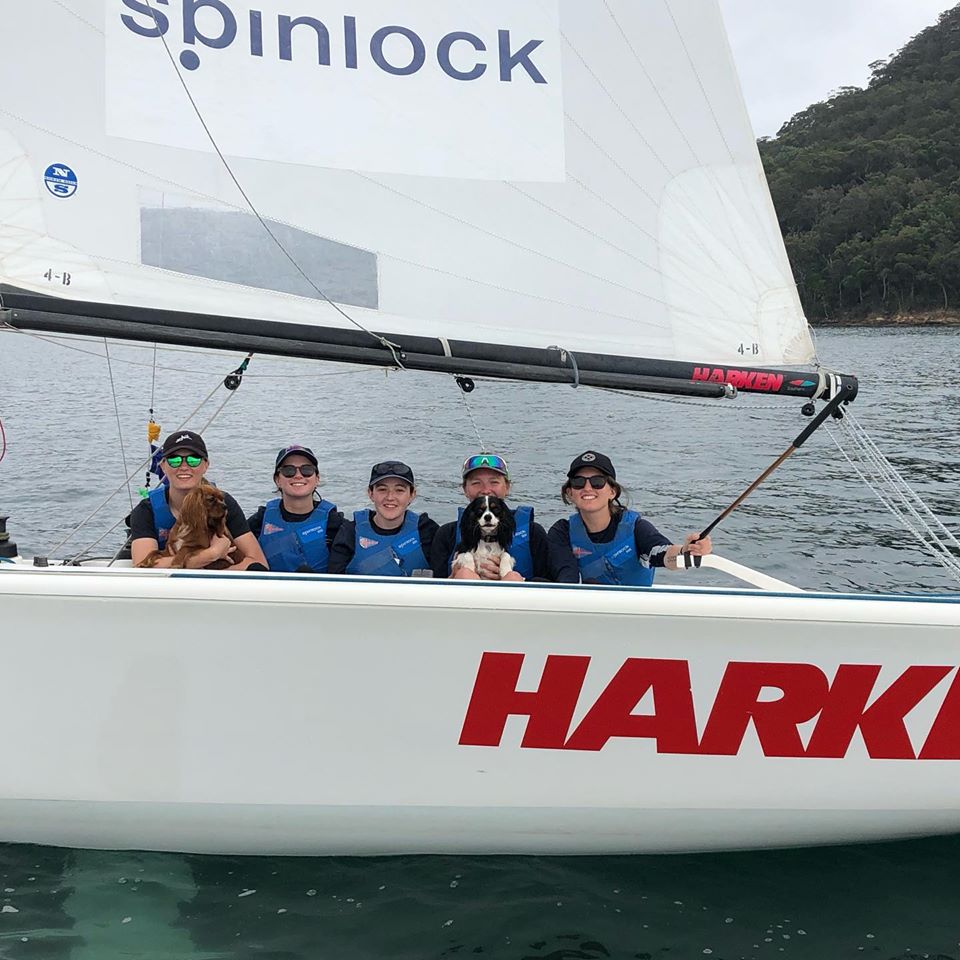 In the final, Gifford’s team of Henry Angus, Chester Duffett, Hunter Gardyne and Seb Lardies defeated the world ranked No. 20 team from Wales, skippered by Matthew Whitfield from Penarth Yacht Club. It means that Gifford pockets the $1200 winner’s cheque, with $800 going to Wales as runner-up.

It did not go all Gifford’s way. He had to fight back from a deficit of two down in the final, but the Kiwis fought back to win the next three matches in the best of five, to take the title.

Gifford said this afternoon: “The standard of competition was pretty high; so overall, it was a pretty hard-fought event.”

On defending the title won by Jordon successfully, Gifford said, “We take pride in the Royal New Zealand Yacht Squadron. We have a good group of guys and girls there - and good program. The Club backs us.

“We knew it was going to be tight competition, so we’re very happy with how we went, especially coming up against the Welsh who are number 20 in the world,” ended Gifford, whose crew went in world ranked 117.

Gifford, though, has plenty of racing experience across the board, including representing New Zealand at the 2014 Youth Olympics, and has raced internationally in anything from Optimists, Bytes and Laser Radials apart from match racing.

Of his team, the confident skipper said: “We had a little bit of practice before we came here, but it’s the first time we’ve raced together.” 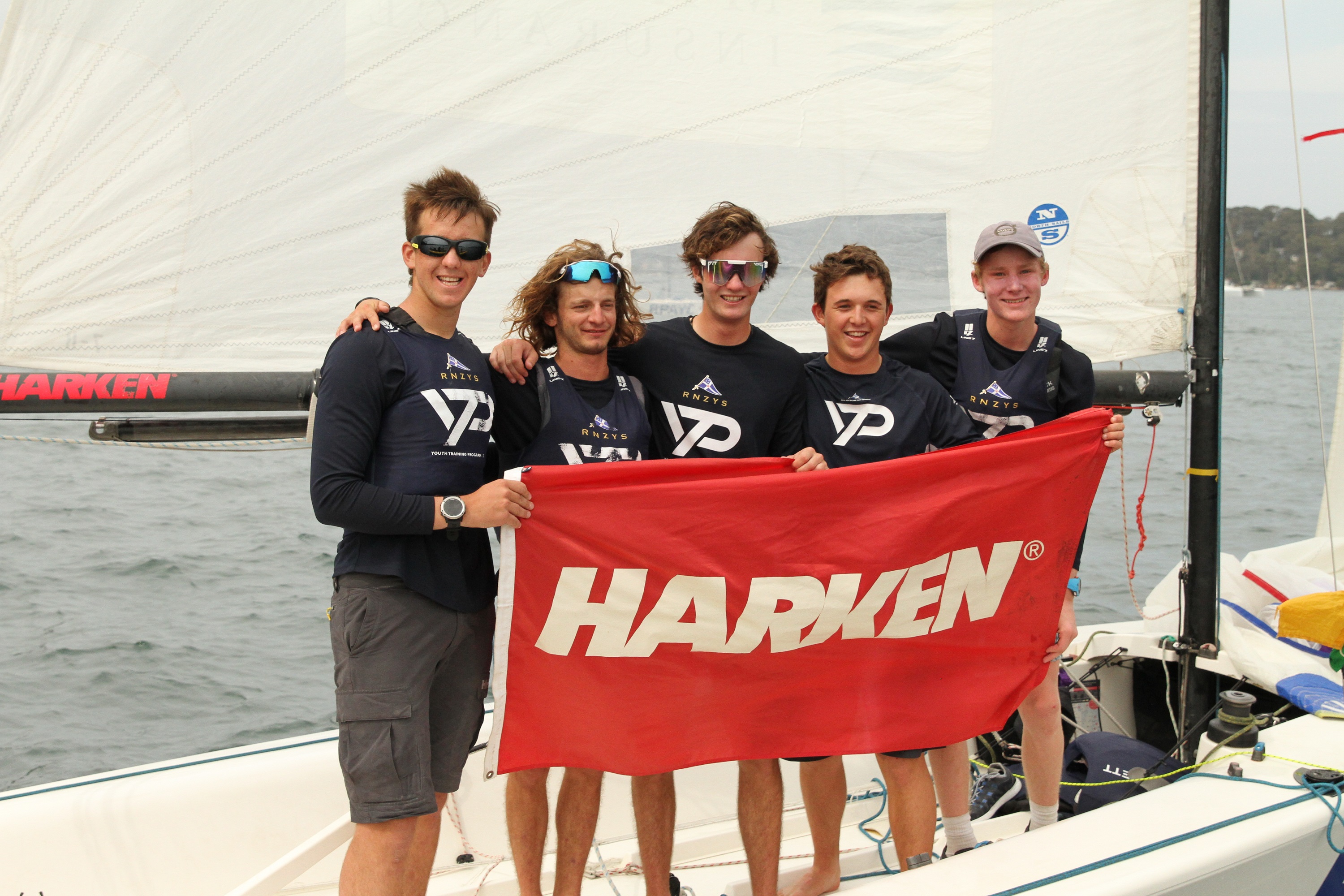 Tom Spithill, the RPAYC’s head coach, commented: “The regatta went very smoothly. The breeze got up to 22 knots on the first day, and really tested everyone’s boat handling. It was light to moderate for the rest; a good all-round package. It showed who can sail well in all conditions.”

Spithill continued, “We’re very pleased with the standard of the competition. Even the world number 20 had matches taken off him, so it shows how competitive all the teams were - they all come from established yacht clubs with good youth programs in place.

On the efforts of the RPAYC teams, Spithill said, “We are absolutely thrilled we had both RPAYC in the semis. It’s the first time and shows the depth of talent we have. Both teams had the potential to have a crack at this event.

A Sportsmanship award of $250 went to Jed Cruickshank’s team, while the Social Media prize of $250 was awarded to the team from Wales.

For all the results, please visit the official website: www.intyouthmatchracingchampionship.com.au 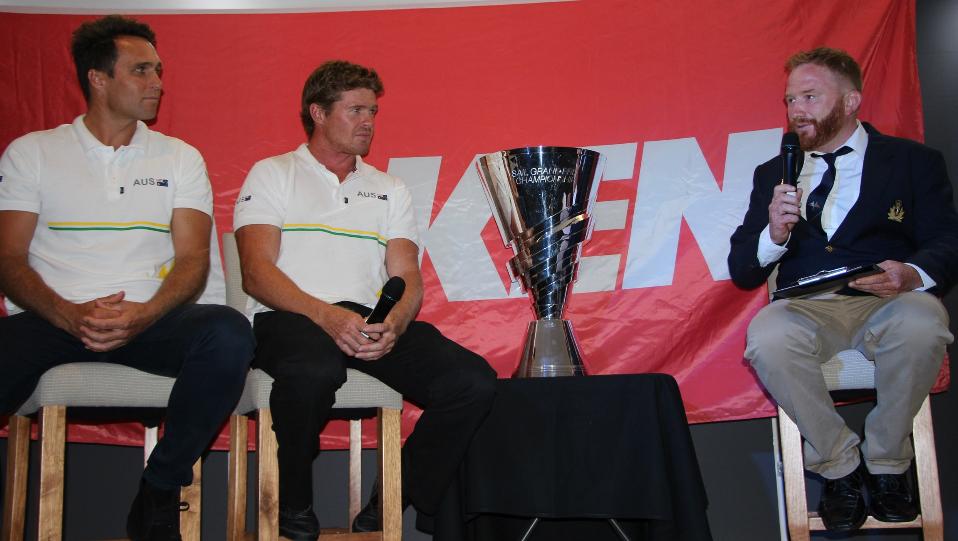 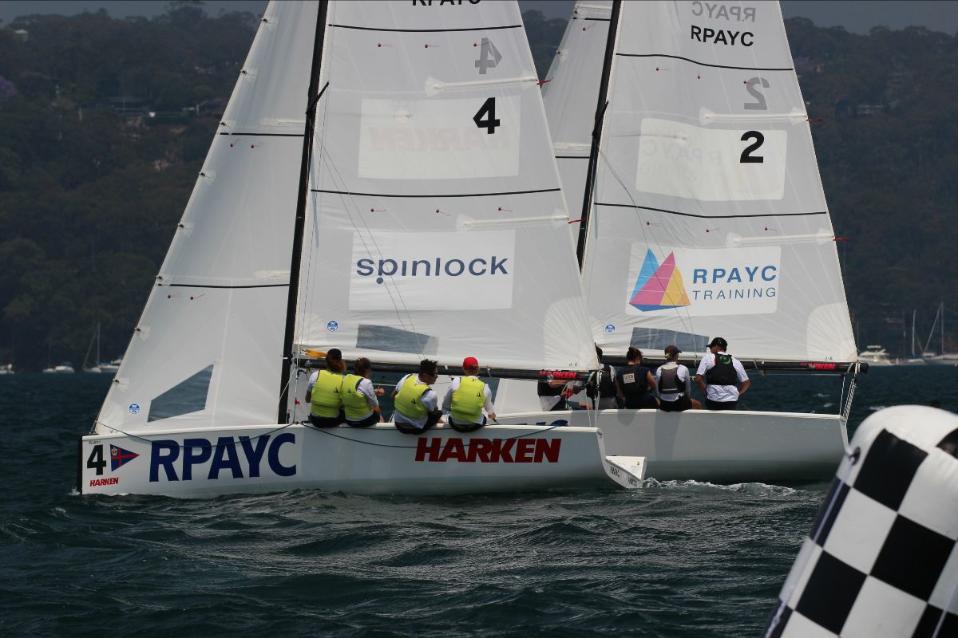