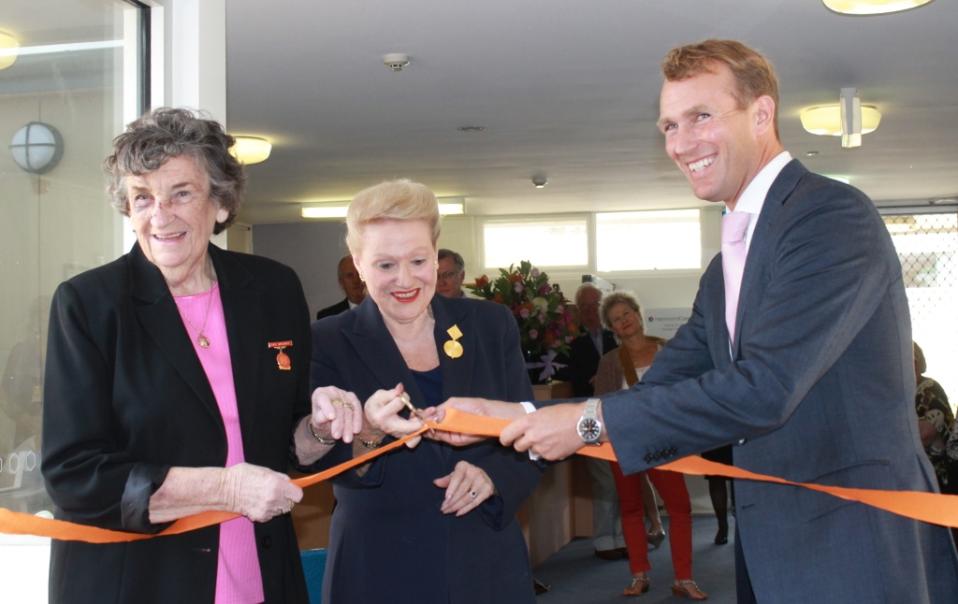 After decades of work from members of the community and local state MP's the day has finally arrived.

We really did not want a HALF-BAKED facility and so the Mona Vale Hospital Auxiliary asked the Health Department, NOT for the 1995 $2million, but to match the funding of this community with $244,767. After all, this was a Health Department Facility on Health Department Land. With the support of Rob Stokes, Member for Pittwater, the State Government agreed to honour the promise of Mr Jim Longley in 1995 to match Auxiliary funds and $240,000 was added to the fund, MVH Kiosk donated $40,000, Rotary Clubs of Pittwater, Terrey Hills and Dee Why/Warringah added their support with combined donations of over $70,000, and Professor Vicki Taylor, CE of NSL agreed to waive the $60,000 fee that would normally be payable to Capital Works for overall supervision of the building project. 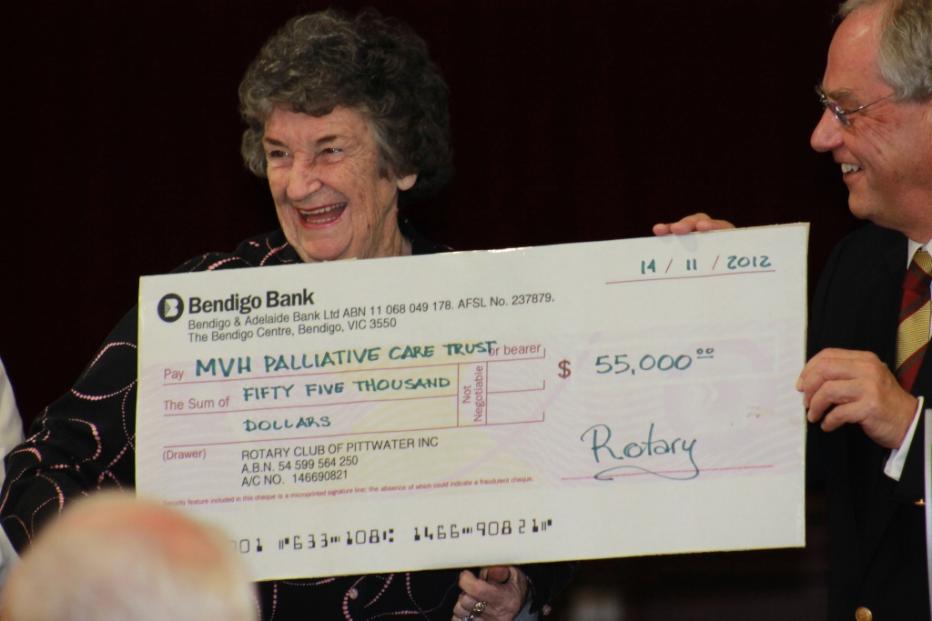 While all this was going on, Friends of Northern Beaches Palliative Care, led by President, Jo-Ann Steeves, were busy organising the refurbishment of the original Cottage – new carpet, painting etc with the help of a State Government grant. 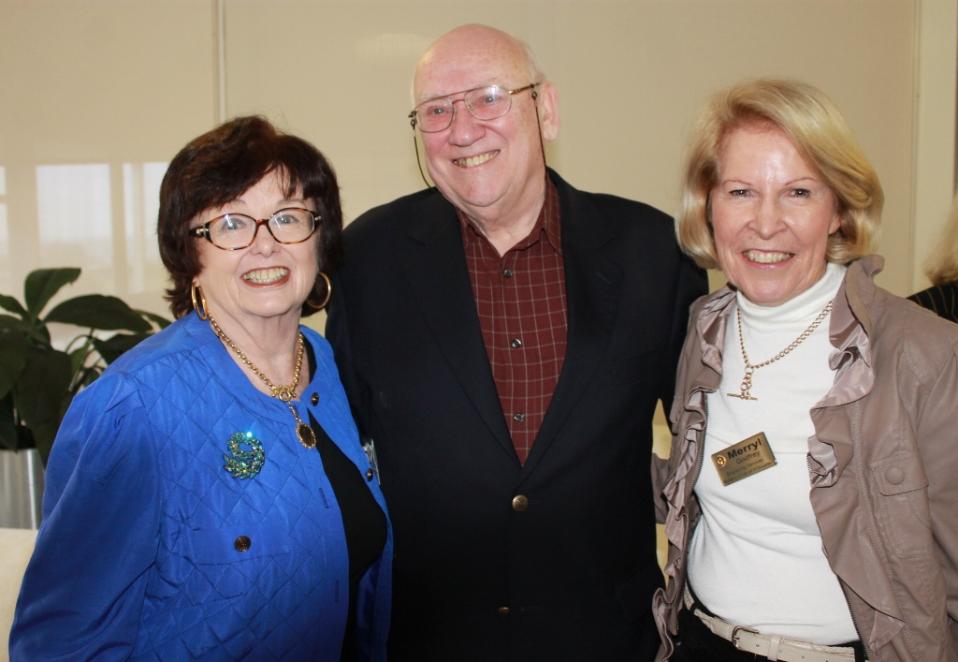 ''After decades, it is indeed a wonderful achievement. Our community has worked so long and so hard to see the original Cottage extended to provide increased day care facilities and now our long-awaited inpatient palliative care. Our palliative care centre is now complete and our community has the palliative care that we have needed for so long. I would like to thank Rob Stokes for his long-term support in bringing this project to fruition.'' Eileen said.

Pittwater Online News also spoke to 2015 Pittwater Woman of the Year, Friends of Northern Beaches Palliative Care President Jo-Ann Steeves and Gail Carew of Rotary and the Mona Vale Hospital Auxiliary, who also both toiled for years through fundraisers and advocacy for this great day.

It has been a long and obstructed journey to achieve inpatient Palliative Care for our Northern Beaches. The local community has persisted with loyal support and, on 4th February 2021, their perseverance was rewarded.

Back in October 1989 Dr John Doran established the community service in the grounds of Mona Vale Hospital. It was his plan to progress straightaway with the addition of inpatient care for people with life-limiting illness. Meanwhile the team of specialized medical and allied health professionals and volunteers has supported thousands of local patients and their families in the clinic and in their homes. The holistic care is physical, emotional, spiritual and familial. When PC hospital care was needed it was out of area where the imposed tyranny of distance separated people at a time when being together with loved ones was ultimately important.

Spirits soared briefly in the early ‘90’s when a twelve bed unit was granted. It was soon rescinded. But hope and support never dwindled as the hospital auxiliaries, Mona Vale (led by Cora Adcock and Eileen Gordon) and Friends of Northern Beaches Palliative Care (with Jo-Ann Steeves), remained stalwart with unwavering resolution.

Meanwhile, with community funding (including Rotary via Gail Carew), a clinic was attached to the Palliative Care Service, increasing the ability of the team to expand and enhance their service to the Northern Beaches from Palm Beach to Manly.

In June 2014 an intense, pro-active lobby group gathered with determined objective to achieve what had been impeded and thwarted. Councillor Kay Millar brought on board the then Pittwater Council.

Seven years later, with valued support of The Hon Brad Hazzard, The Hon Rob Stokes, James Griffin MP and NSLHD CEO Deb Willcox, a gloriously sunny day greeted the opening of the state-of-the-art, ten bed facility. It adjoins a ten bed Geriatric Evaluation Unit. Staff have been chosen for professional expertise and qualities that optimize the care rendered by this medical specialty.

The unit sits on the edge of the ocean and the golf course.  Each room is single, with a private balcony and comfortable accommodation for a loved one to remain overnight. Lounges, a contemplation area and other amenities have been created to optimize the experience of patients and visitors. Families, including frolicking pets, can be in visual proximity outdoors. The nurturing Northern Beaches culture, in which they have lived, will embrace patients on their journey.

The Mona Vale Hospital Auxiliary and Friends of Northern Beaches Palliative Care, with community assistance, will continue support for the unit. FONBPC, with a NSW grant, is currently completing a see-through safety fence, a paved path connecting to the NB Council walk and landscaping.

We express enormous gratitude to all who have encouraged and supported us on acquisition of the Northern Beaches Inpatient Palliative Care unit. Let us continue, together, to enhance the experience of our loved ones, friends and neighbours.

Although many of those who have been so integral in the realisation of this community project were absent from the formal opening this week, the official news provides insights into what has been achieved and what can now be offered:

Northern beaches patients nearing the final stages of life will be supported and cared for closer to home with a new, purpose-built palliative care unit at Mona Vale Hospital.

Health Minister Brad Hazzard, Member for Pittwater Rob Stokes and Member for Manly James Griffin toured the unit today, which will open next week and is funded under the NSW Government’s $619 million upgrade of Northern Beaches health facilities.

“Palliative care patients will receive the very best, highly specialised care focused on both their physical and emotional needs while remaining close to family and friends,” Mr Hazzard said.

“The NSW Government is committed to providing best practice multi-disciplinary palliative care services that give patients and their families real choice and support during what is undoubtedly one of the most difficult times.”

Since 2017, the NSW Government has invested an extra $145 million to palliative care and reducing avoidable hospital admissions, on top of an annual investment of $220 million. The 2020-21 NSW Budget also includes a $56 million additional funding boost for palliative care services.

“This is another important addition to Mona Vale Hospital and will see a specialised palliative care unit available for the first time on the Northern Beaches,” Mr Stokes said.

“These new services will join the urgent care, community health, diagnostic, rehabilitation and other speciality services provided at Mona Vale Hospital and further boost the number of medical staff on site.”

Member for Manly James Griffin said it would provide respite for patients and their carers.

The Geriatric Evaluation and Management unit will provide early assessment and treatment for people experiencing health conditions associated with aging, such as a tendency to fall, reduced mobility and cognitive impairment.

Some happy snaps from the opening: