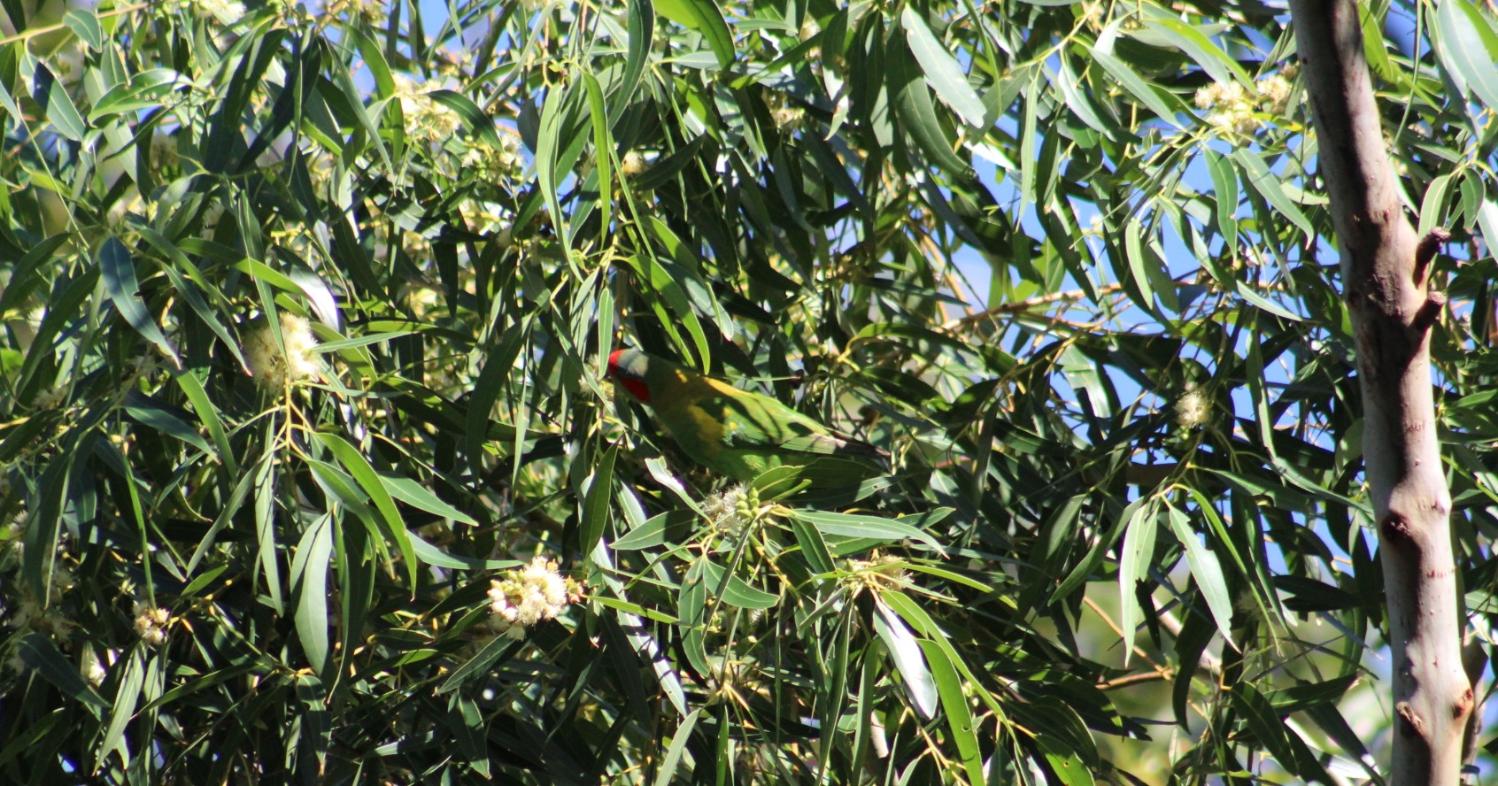 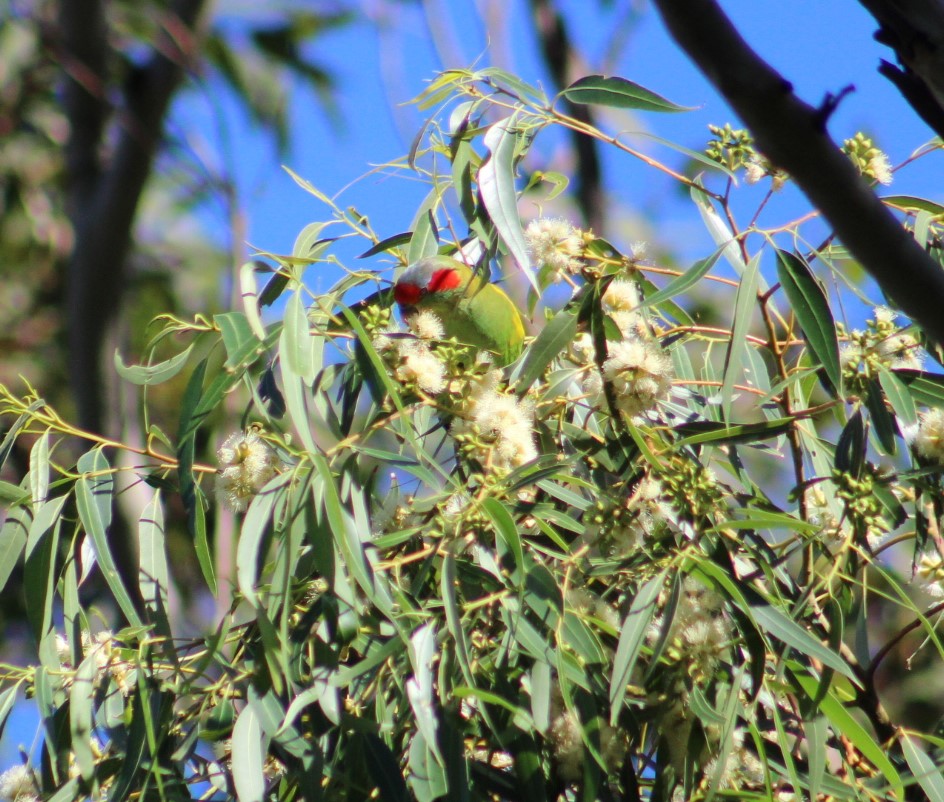 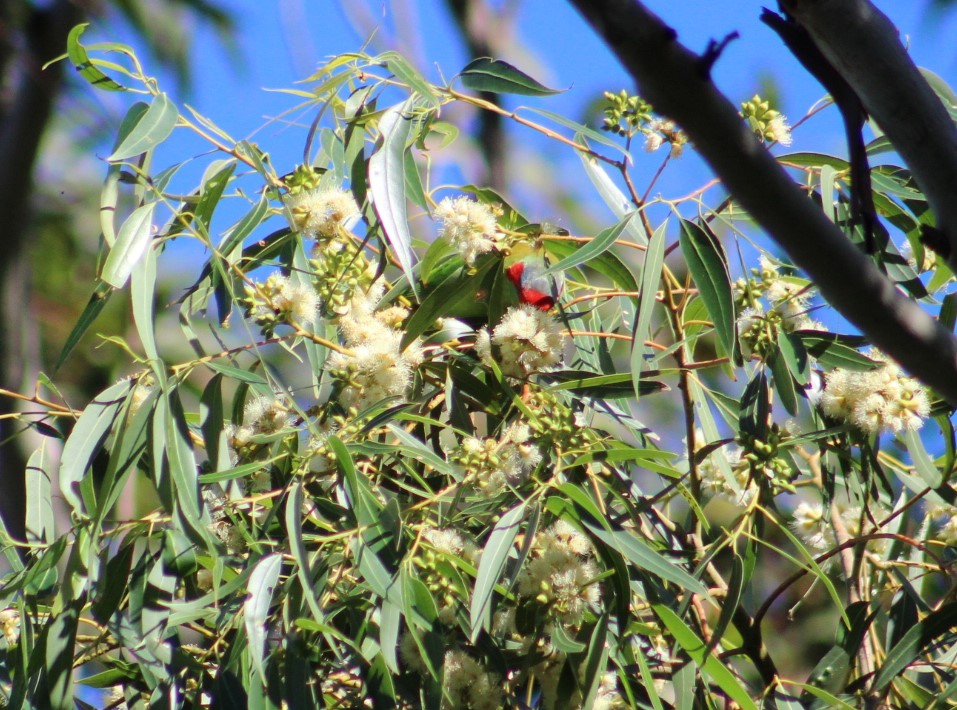 The Musk Lorikeet is a medium-sized, sturdy lorikeet, sometimes seen in large flocks when trees are flowering and often in mixed flocks with other parrots and other birds. They are active and noisy. This lorikeet is mostly green, with a yellow patch at the side of the breast. It has a bright red forehead and band through the eye to the ear coverts. The crown is blue, with females having less blue than males. In flight, brown flight feathers and the golden tail are revealed. Flight is fast and direct, with short angular wings and a medium-length, pointed to wedge-shaped tail. 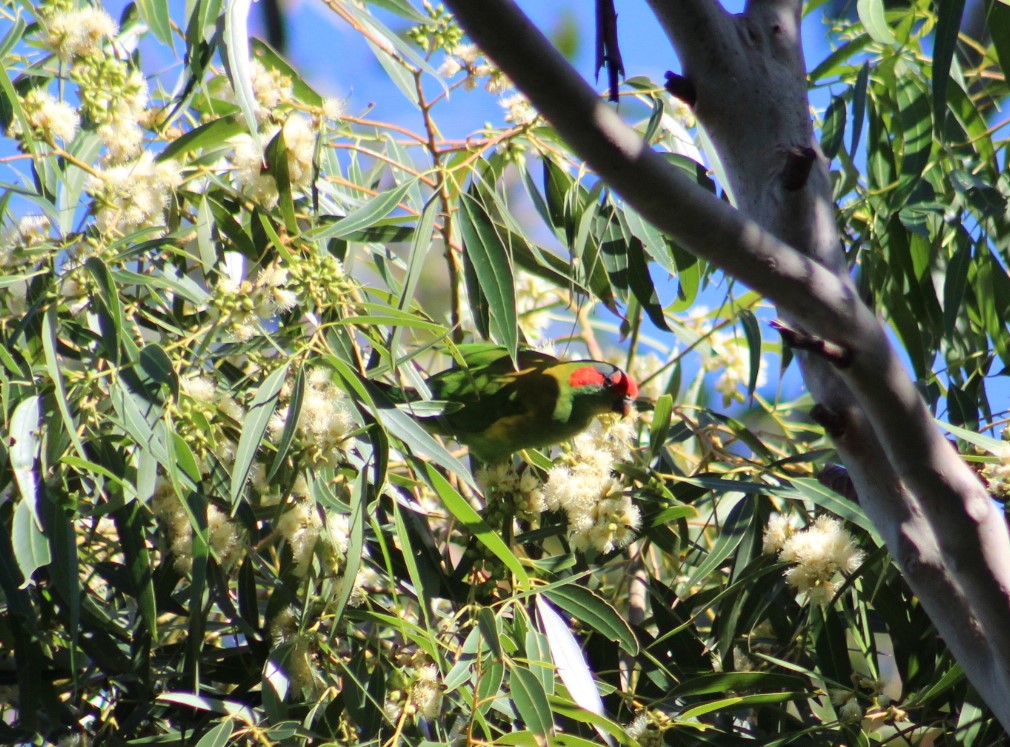 The Musk Lorikeet specialises in feeding on the nectar which is produced by flowering eucalypts, and sometimes also from the flowers of banksias and grevilleas. They collect nectar with their brush-shaped tongues. Lorikeets are usually seen feeding in large noisy flocks in the canopy of eucalypts, often associating with other nectar-feeding birds, especially Rainbow Lorikeets and honeyeaters. The movements of Musk Lorikeets are often correlated with the flowering of trees, with birds appearing when the trees are in bloom, and leaving after the flowering has finished. 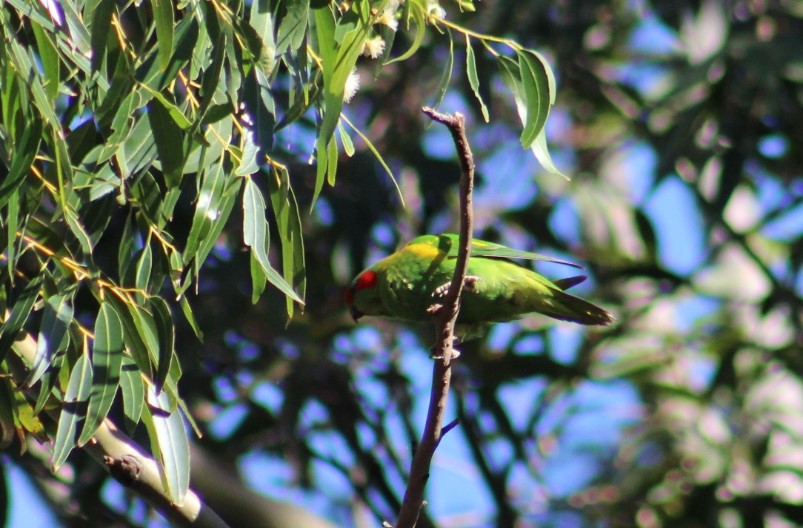 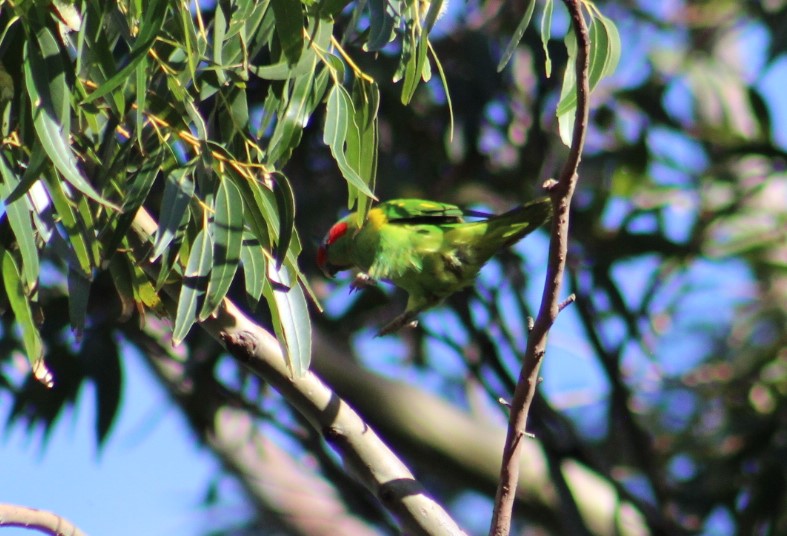 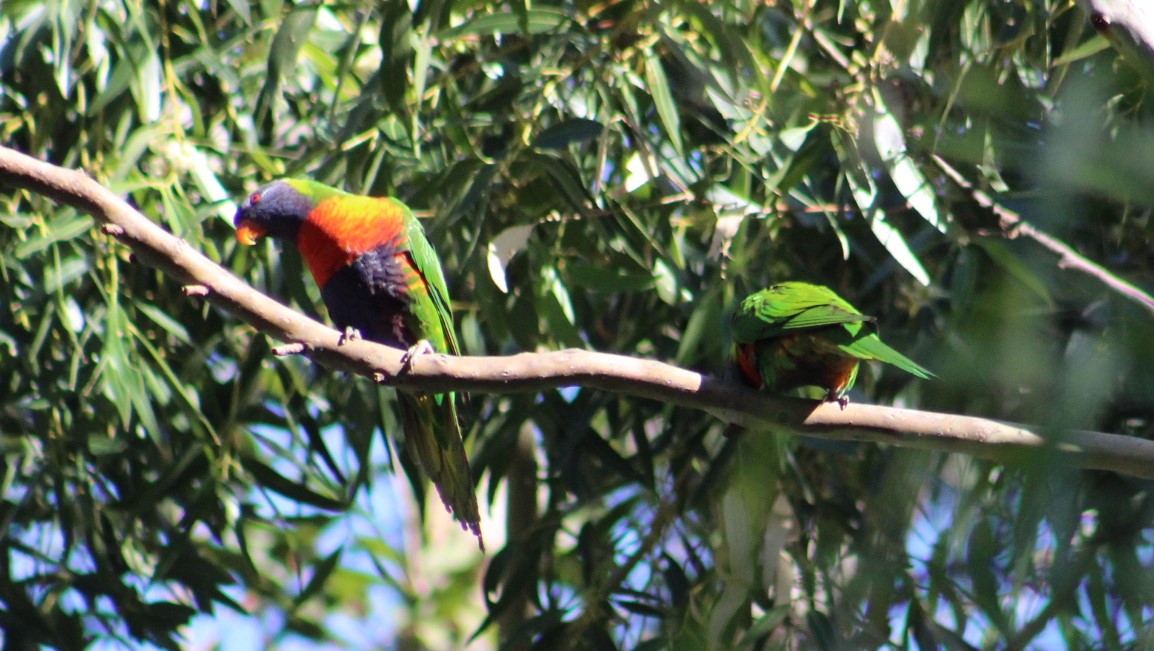 Musk Lorikeets are endemic to (only found in) south-eastern Australia, being widespread in eastern New South Wales, all regions of Victoria and in the south-east of South Australia.

Musk Lorikeets breed in hollow branches and holes in living eucalypts, often near watercourses. The entrance holes are usually very small, so they have to squeeze in. Eggs are laid on a base of chewed or decayed wood. The female incubate the eggs and both parents roost in the hollow at night. 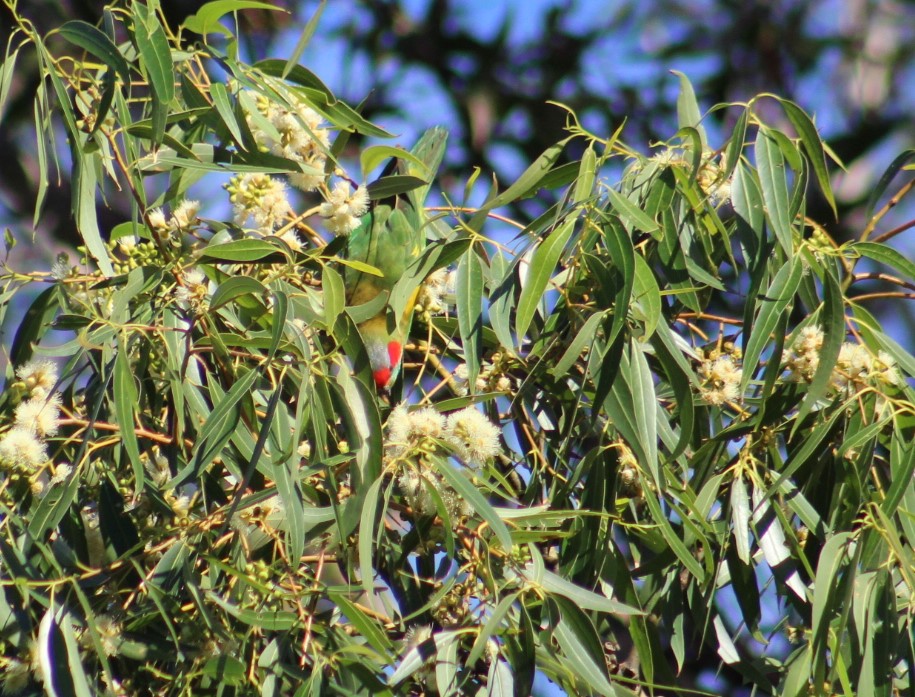 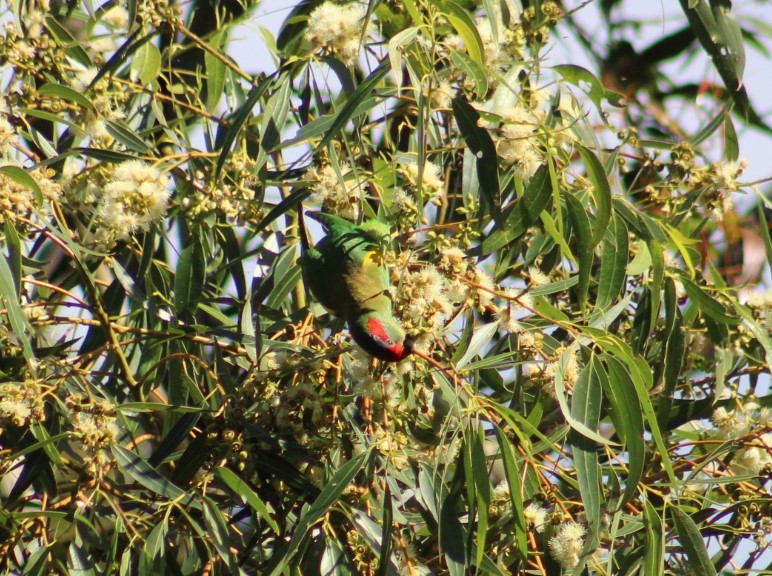 The musk lorikeet was first described by ornithologist George Shaw in 1790 as Psittacus concinnus, from a collection in the vicinity of Port Jackson in what is now Sydney. John Latham described it as Psittacus australis. Its specific epithet is the Latin concinna "elegant". They were/are also known by a Sydney indigenous term coolich.