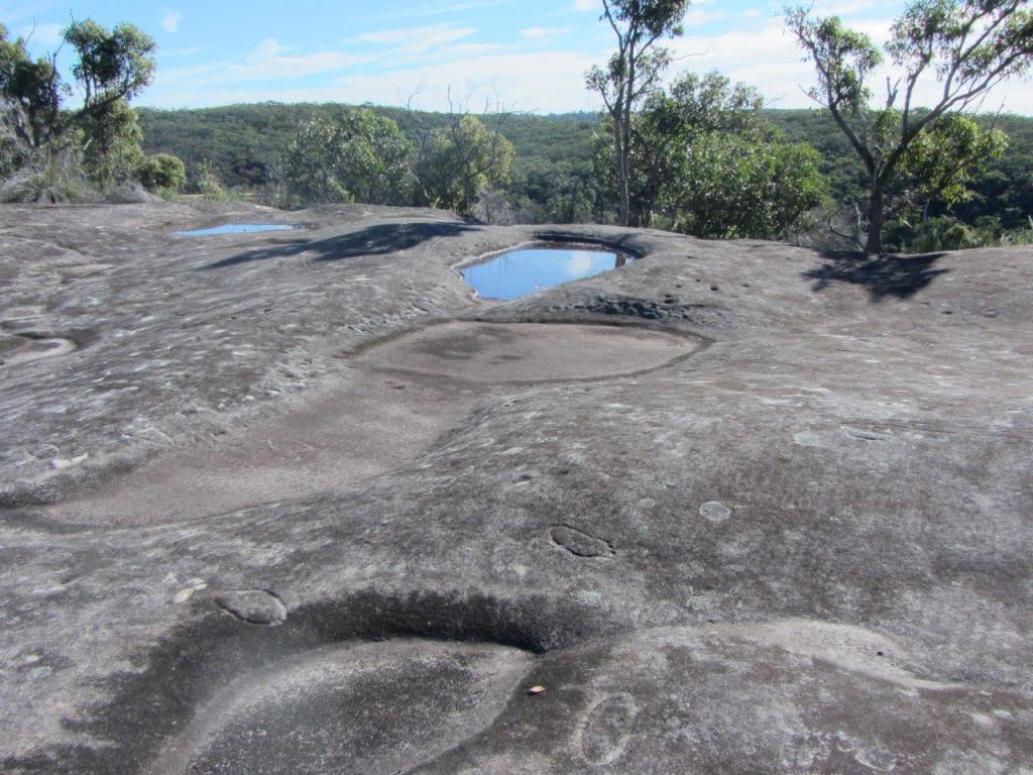 Aboriginal people had traditionally gathered at Moon Rock to meet, learn and heal.

“Moon Rock has become well known for about 50 engravings which depict different phases of the moon, tools and weapons used and animals caught and eaten in the area,” Mr Speakman said.

“The site holds significant Aboriginal cultural values and has a direct connection to country for the local Aboriginal community.”

Metropolitan Local Aboriginal Land Council nominated Moon Rock as an Aboriginal Place to help protect it as a place where Aboriginal people have gathered for generations to pass on knowledge, participate in traditional ceremonies and share traditional stories. Minister for Aboriginal Affairs Leslie Williams said the engravings at Moon Rock were rare and went back thousands of years.

“It’s important that we protect this historic site so that future generations learn about it and appreciate its cultural significance,” Mrs Williams said.

The declaration legally recognises and protects its cultural values but does not change the status of the land or affect ownership rights. It is an offence for a person to harm or desecrate an Aboriginal Place.

Pittwater Online News spoke to Neil Evers, a member of the Aboriginal Support Group – Manly Warringah Pittwater and descendant of James Frederick Lewis about this week's announcement. Neil has shared many insights into our area through Bungaree was Flamboyant during a Patriarchs of Pittwater I focus and again in Sarah A. Biddy Lewis - Martha Catherine Benns, during a Matriarchs of Pittwater I focus, as well as being our 'go-to' gentleman for insights on historical, cultural and contemporary matters regarding local indigenous residents. He is the Editor of Elimatta, the ASGMWP's Seasonal Newsletter - Spring 2016 HERE

As a direct descendant of the Garagal Clan I wish to thank you for acknowledging and paying respect to the traditional custodians on the land on which we stand. My ancestors would be very happy.

There are over 4000 etchings of their stories in our local area and we need to respect the stories beautifully recorded in these etchings. Moon Rock alone has around 50 engravings, and in this case they are depicting Aboriginal astronomical knowledge, with eight lunar phases shown and Baiame the creator-spirit, as well as local totems, food, weapons and whales and stingrays.

It is no surprise that they were able to work this out and how their lives depended on the different seasons, and not just the four seasons that the colonials brought with them.

My ancestors utilised the land and its gifts for many generations and if you can imagine life before the British first arrived, it would have been completely different lifestyle.

The lakes and rivers crystal clear, beautiful wild life, great fishing and plentiful seafood. They had an abundance of food. Our local lands were the hunting, gathering and living grounds of my ancestors.

Neil was delighted to share some more great news this week on the same day we communicated the NSW Environment and Heritage Department's announcement.

"On the 26th of November Garden Island is dedicating a park to King Bungaree. A local Aboriginal man honoured by the Navy. Big day for the Mob!!" he said.

Premier Baird's announcement runs below.
Bungaree's association with Garden Island, and our Navy's wish to honour his contribution to them, may be traced to his work assisting Flinders and King in their explorations around the whole of the Australian coastline and the island being the place he wanted to see the world from during the last moments of his life.
The Heritage Office has added a preceding phase to Garden Island Historian Tom Frame's three chronological phases of the island and its precincts. Theirs explores the significant Aboriginal attachment to the island and surrounding foreshores pre-1788-c.1820, and is categorised as the 'Ba-ing-hoe and Derawan' phase, this provides further insight into Bungaree's association with Garden Island:
BA-ING-HOE AND DERAWAN, pre-1788 to the 1820s
The topographical formations now known as Garden Island and Potts Point first became recognisable features in the Sydney Harbour landscapes about 6 500 years ago when sea levels stabilised at their current levels. The Cadigal people came to know them by the names of Ba-ing-hoe and Derawan (Attenbrow, 11). In June 2004 the NSW State Government announced an initiative to reintroduce a dual naming policy for such significant landforms. Over the following few thousand years, the harbour's Aboriginal population gradually increased, developed significant technologies (such as fish-hook making), raw material utilisation (such as recovering shells for tool making), and maximised estuarine food resources from rocky shorelines, such as shellfish.
Within 2-3 years of the arrival of the British in 1788, the Cadigal people's patterns of life were increasingly difficult to sustain, due to conflict, loss of resources, disease and the attractions of developing colonial towns. In 1791 it was reported that only three Cadigal people remained alive after a small pox epidemic (Turbet, 21). Others have questioned this rapid demise when, for example, in 1795 it was reported that a large number of people had gathered in Farm Cove, only 500 metres west of the Precinct, for an initiation ceremony (Attenbrow, 131-3).
The island itself must have had some significant connections to certain Aboriginal people, and was known to have been the scene of early armed conflict between local Aboriginal (probably Cadigal) men and British soldiers in 1788 (see below). Cadigal use of the island was not recorded by colonial observers, although other Aboriginal associations were reported. The story of Bungaree's death on the island is notable and has been explored by several writers. Although from Broken Bay, 'King' Bungaree was recognised by Governor Macquarie as the 'Supreme Chief of the Sydney Tribes' (Sydney Gazette 27/11/1830), and was a well known and respected figure around Sydney.
Bungaree had accompanied Mathew Flinders on several of his voyages along the east coast, the Torres Strait and the Gulf of Carpentaria between 1799 and 1803 (Frame, 78-79). He travelled with King in 1819 (McBryde, 33), so was probably the first Aboriginal person to have circumnavigated Australia (although not in a single voyage). Macquarie's last vice-regal act was to arrange for Bungaree to be given a boat and net so that he could engage in commercial fishing (Horton, 164).
In late 1830 Bungaree was admitted to the General Hospital, and after being sick for some time asked to be taken to Garden Island to die. The 'King's' wish was granted and on 27th November 1830 he passed away surrounded by "his own tribe, as well as that of Darling Harbour'. A coffin was sent to the island from the government lumber yard, and it was reported that Bungaree was to be buried in Rose Bay next to one of his queens (Sydney Gazette 27/11/1830), possibly Matora (Attenbrow, 141). Frame argues (78-79) that Bungaree was taken to die on the island in appreciation of his services to the Royal Navy in assisting Flinders and other navigators. Attenbrow states that by the 1820s the original ways of life of the Cadigal had been lost, although descendants of the Cadigal of 1788 still remained in Sydney. By the 1820s, Ba-ing-hoe and Derawan had become well known in Sydney by the English names of Garden Island and Paddy's Point (Pollon, 208), and colonial forces were beginning the shape the precinct.

Also of importance and coming up, as reported in Pittwater Online - Environment Page, Issue 293, Published October 2nd, 2016, are plans to expand the Narrabeen State Park:
'As part of Stage 1, Council staff in cooperation with Department of Industries – Lands (Lands), have identified adjacent foreshore Crown Land parcels for immediate inclusion. This process is underway. Council is also investigating the inclusion of additional parcels in the Narrabeen Lagoon catchment that are under a range of different owners.'
The Friends of Narrabeen Lagoon Catchment are hosting what should prove to be an insightful Forum this November 28th, at the CEC, 7pm, as Pittwater's MP, NSW Minister for Planning, Rob Stokes, and the Administrator, Dick Persson, will each speak about Narrabeen Lagoon State Park and its future.
Judith Bennett, President of Friends of Narrabeen Lagoon Catchment asks this week that all FoNLC Members and those interested attend. Please reply to this email: email@narrabeenlagoon.org.au giving the name/s of people wanting to attend and they will send you your ticket/s.
The Friends of Narrabeen Lagoon Catchment do not charge for their Forums but do have a means where you can doinate a coin at the door to contribute towards the great work they do. Membership of Friends is also kept to a minimumal 'towards costs' token and is a great way to stay in touch with what's happening around this beautiful waterway. Visit their website for more: www.narrabeenlagoon.org.au
To celebrate this wonderful news this week we share some wonderful images of Moon Rock and its flowerings courtesy of Neil Evers (Uncle Neil) and below this a small item found and forwarded to him a few years ago during a History page focus on Pittwater's Watery Environs. 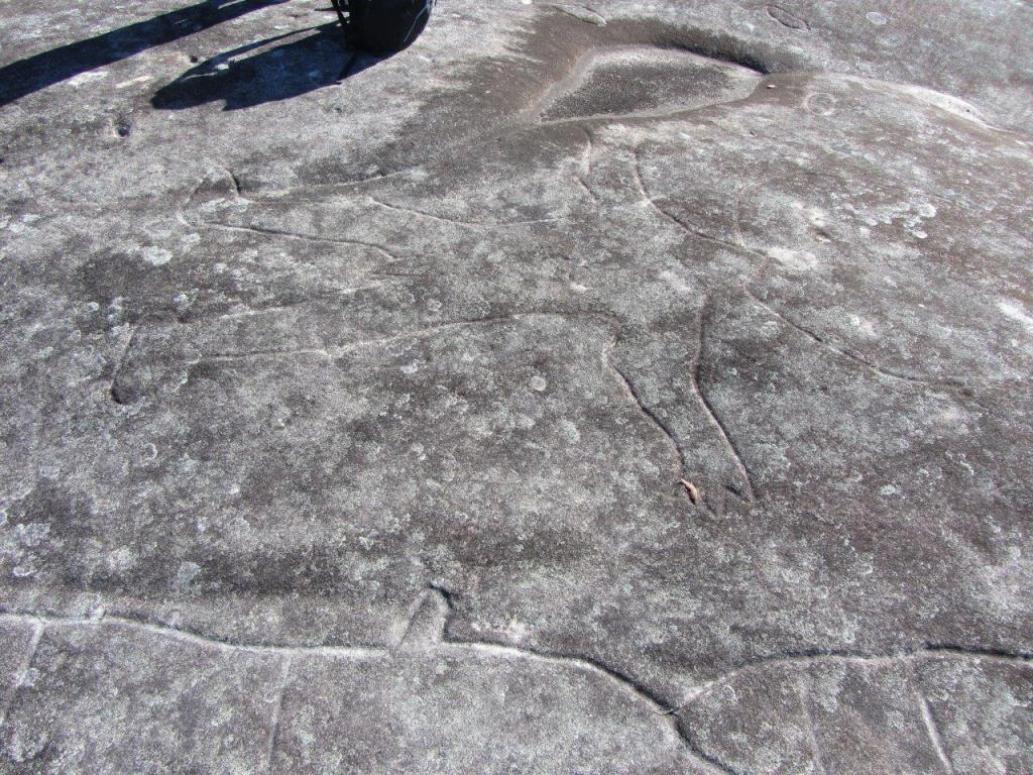 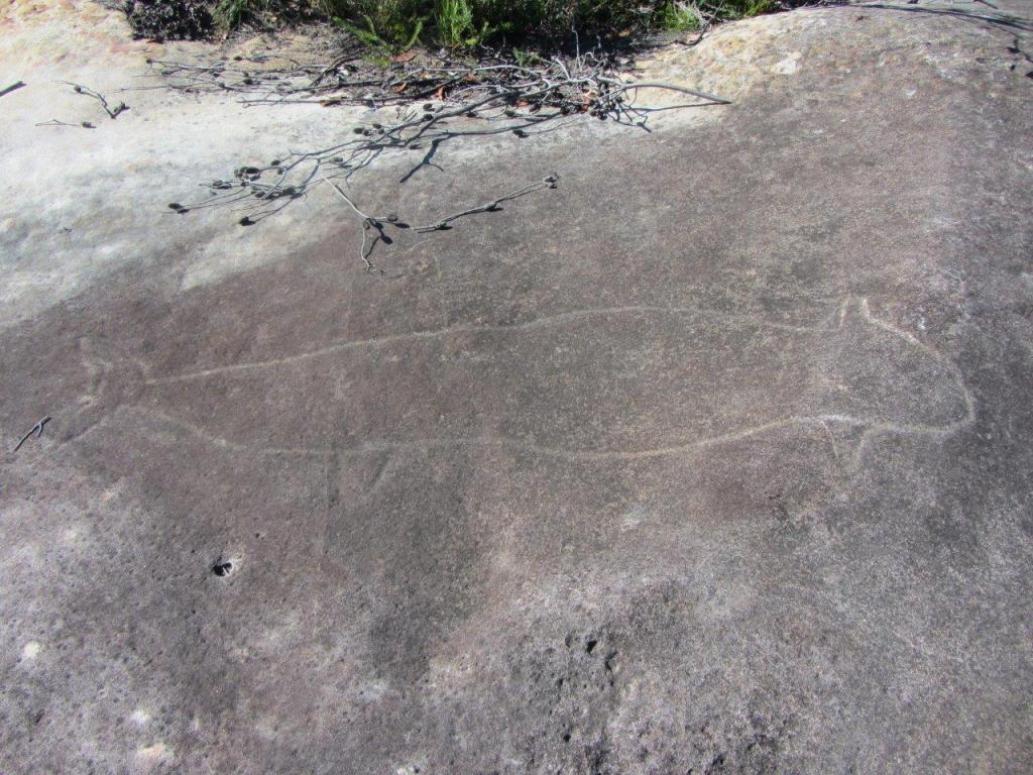 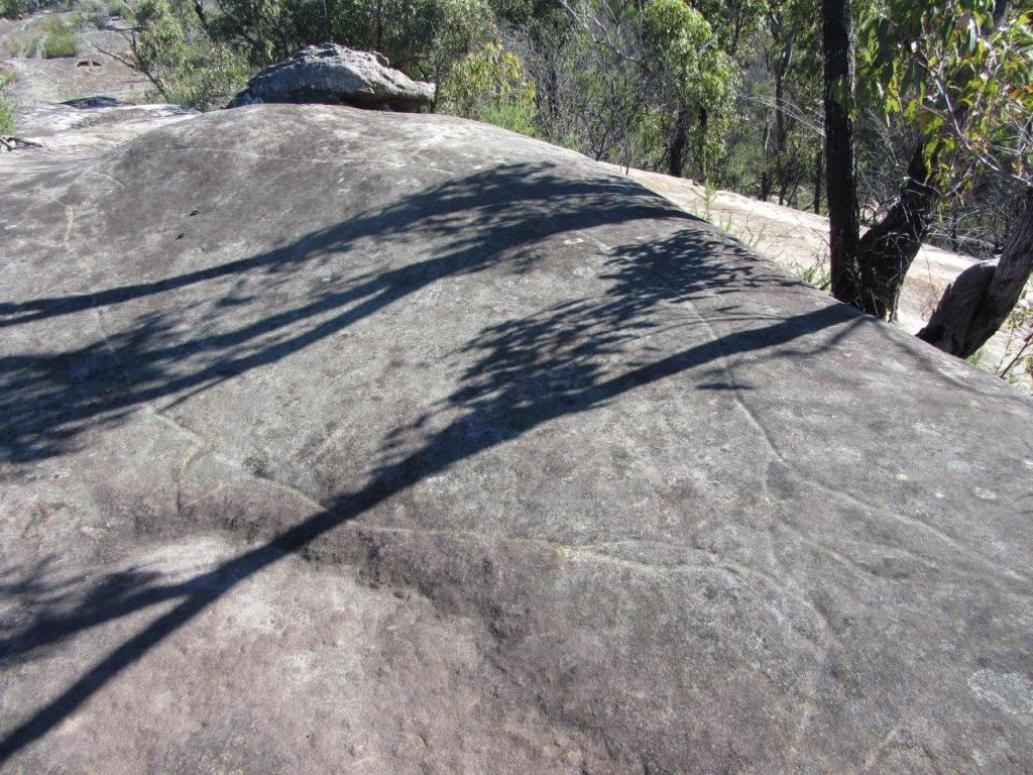 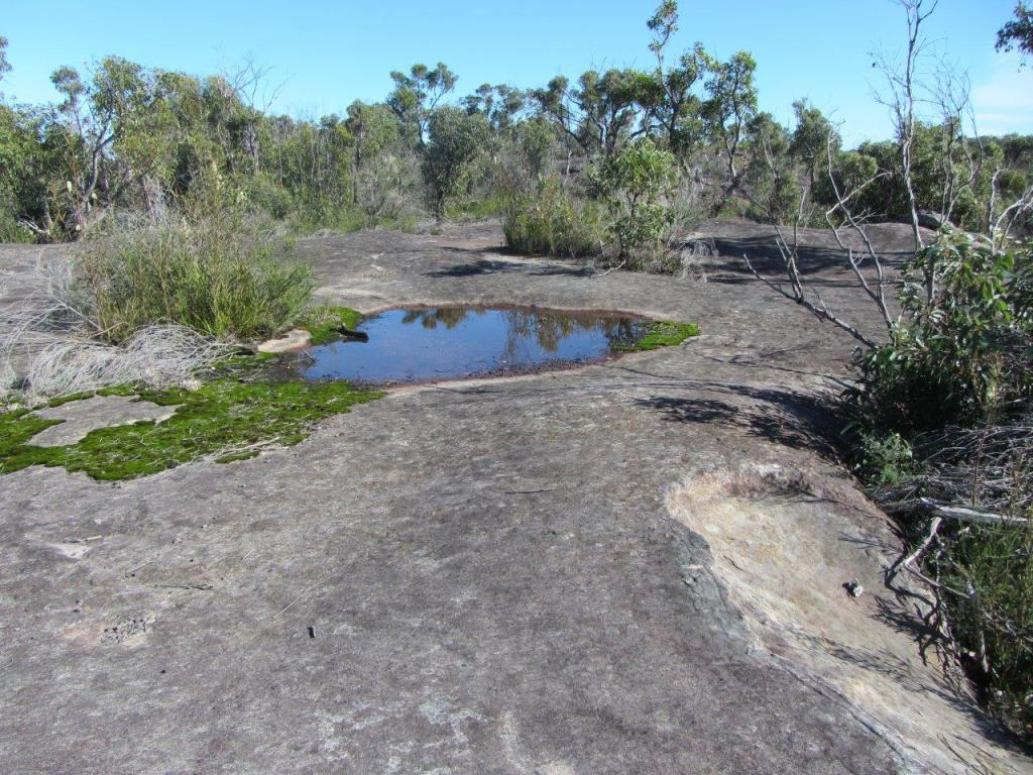 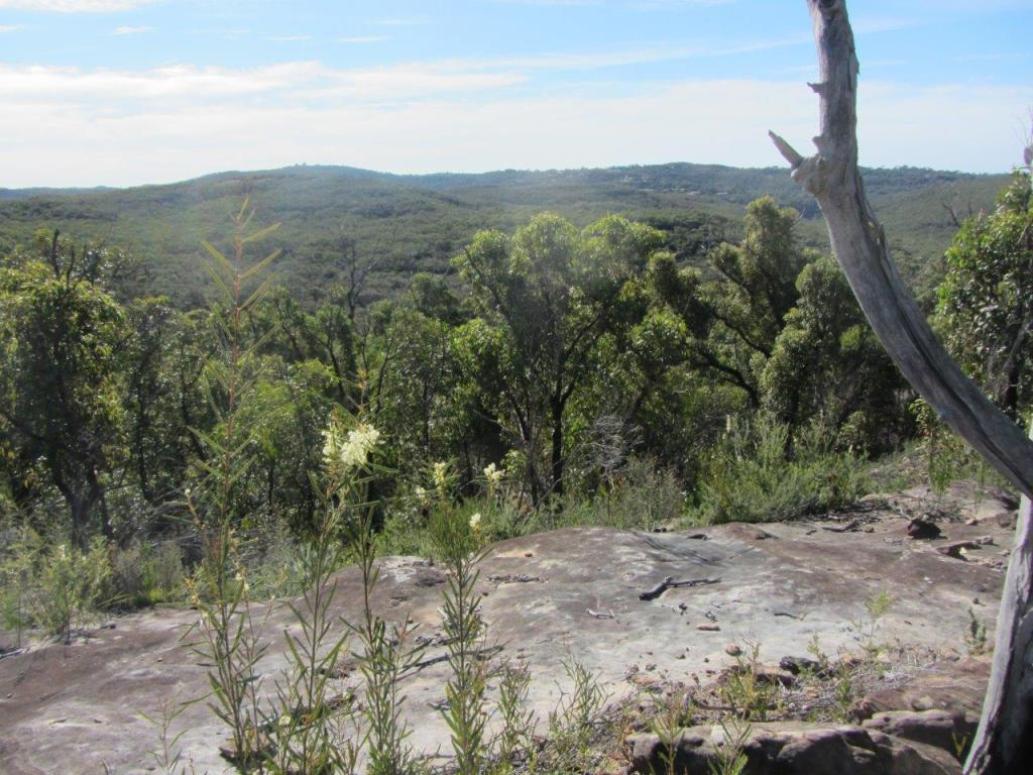 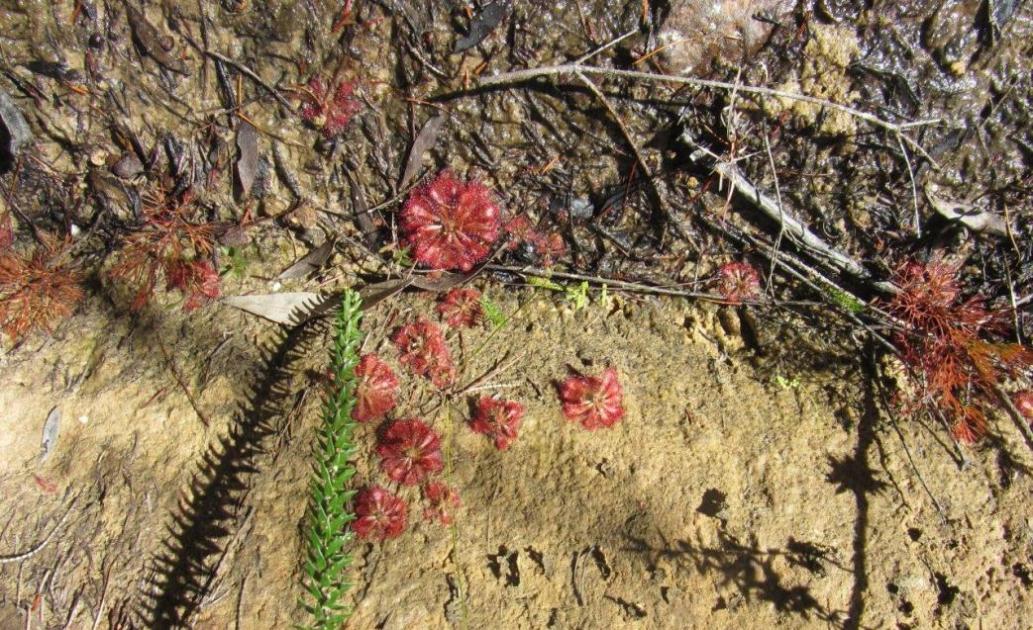 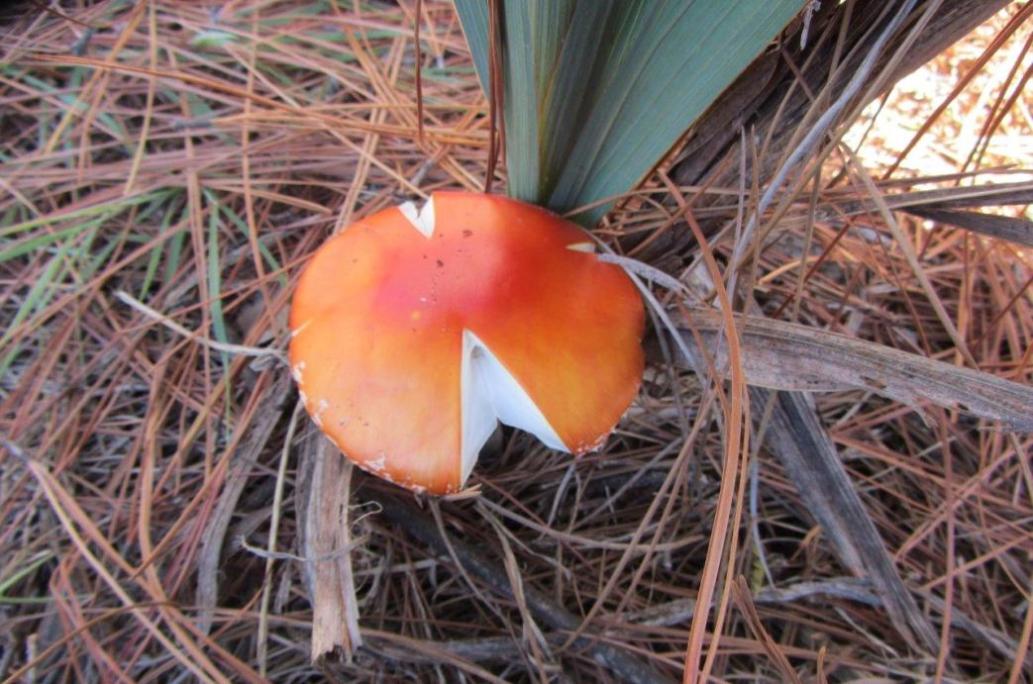 PEEPS FROM AN ABORIGINAL GIBBER GUNYAH. 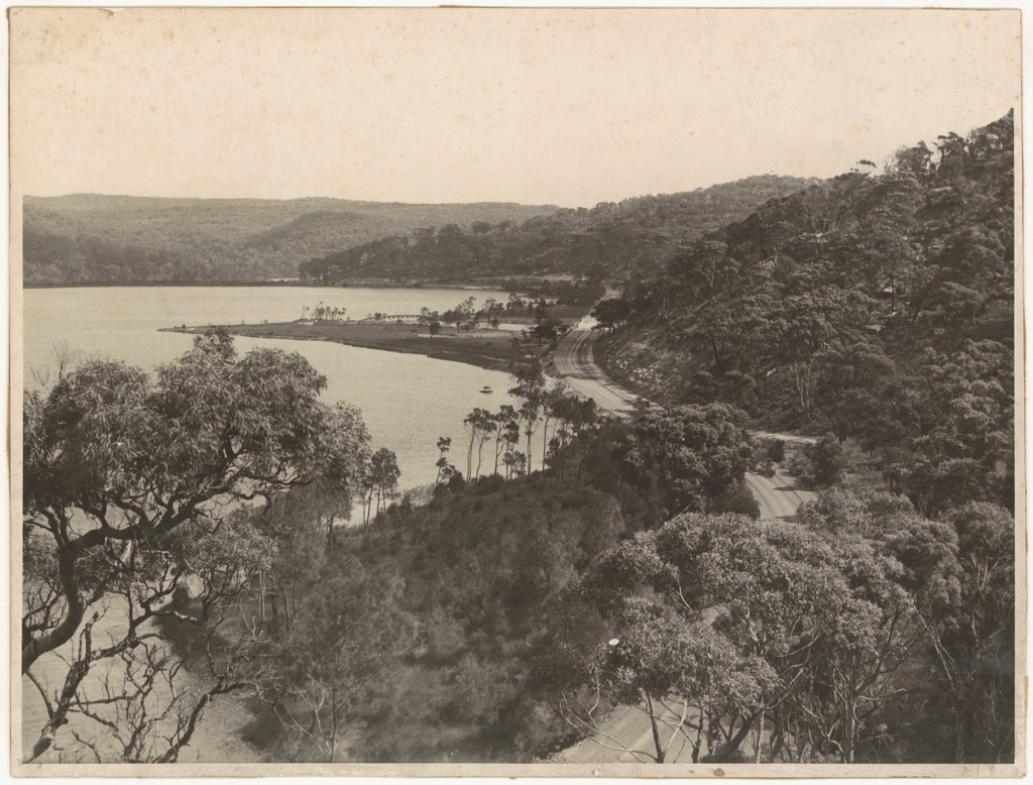 A future for Goat Island (Me-Mel)

15th October 2016:Premiers Department
The NSW Government will work with the Metropolitan Local Aboriginal Land Council to unlock the cultural and economic potential of Goat Island, known traditionally as Me-mel.
Premier Mike Baird and Aboriginal Affairs Minister Leslie Williams today announced the NSW Government will establish a Joint Working Group to explore mechanisms to enable Aboriginal management of Goat Island, including Aboriginal ownership.
“Goat Island, in the centre of Sydney Harbour, has enormous cultural heritage significance for Aboriginal people and was once inhabited by Bennelong and his wife Barangaroo,” Mr Baird said.
“Our commitment to work with the local Aboriginal community provides an incredible opportunity to recognise this unique site always was, and always will be, Aboriginal land.”
The Joint Working Group will include Aboriginal, stakeholder and government representatives in recognition of the shared Aboriginal, colonial and maritime history of Goat Island.
“The NSW Government will work in partnership with the Aboriginal community to explore options for the future use of the island, while recognising the unique historic and cultural heritage aspects of the site,” Mr Baird said.
“We are committed to ensuring Aboriginal leadership in management and decision making for the sustainable use of Goat Island.”
The Joint Working Group will be responsible for exploring mechanisms to enable Aboriginal management, including Aboriginal ownership, and developing a business case to unlock the economic potential of the island and ensure its sustainability.
Of priority will be ensuring that existing operations on the island can continue; heritage can be protected, restored and celebrated; and public access rights are maintained.
Minister Williams said the Government knows Goat Island has special significance for Gadigal people, but also acknowledges the island is a unique place that will provide economic, cultural and tourism opportunities for the Aboriginal community more broadly.
“We will work with Metro Local Aboriginal Land Council and other Aboriginal community representatives to progress the Government’s commitment to local decision making to lead exploration of future opportunities, including increasing public access and sharing cultural experiences,” Mrs Williams said.
“We are absolutely committed to Aboriginal leadership for Goat Island, while also acknowledging its heritage significance to all NSW citizens.” 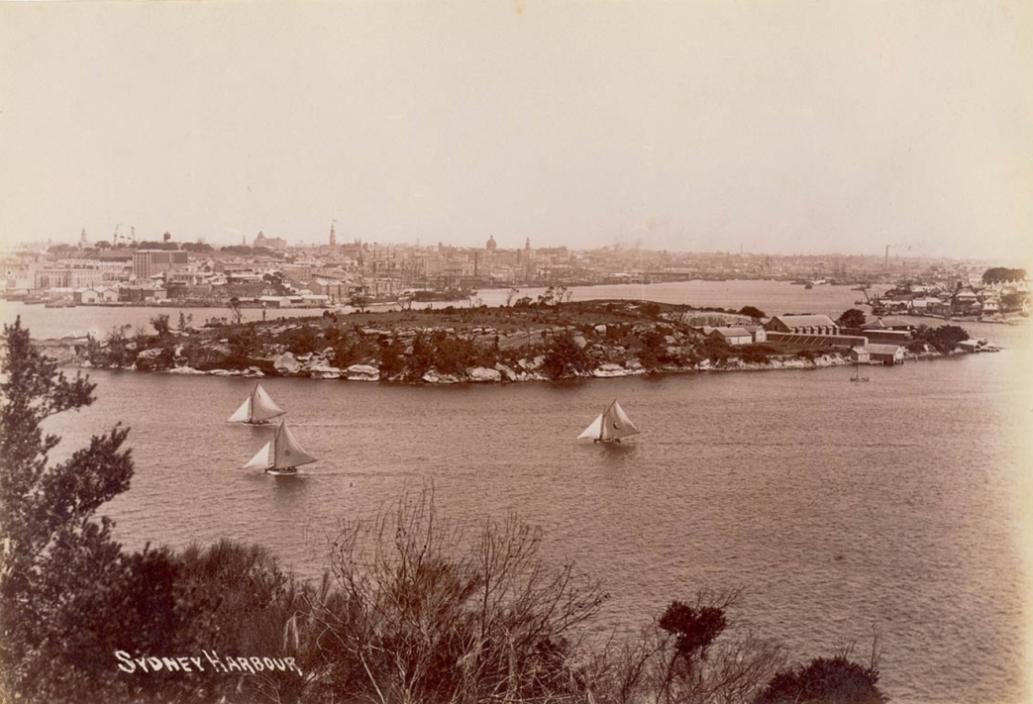 Goat Island, Sydney Harbour - Between 1898 and 1901
The photograph is after 1898 as the Queen Victoria Building dome is visible, but prior to 1901 as there is no Harbour Master's residence on the island and no Sydney Harbour Trust activities on Millers Point. This is the best 19th century photograph of the Powder Magazine, Goat Island, taken from either Birchgrove or Longnose Point. -- Information supplied by Chery Kemp, 2008
Image No.: a116053, courtesy The Mitchell Library, State Library of NSW 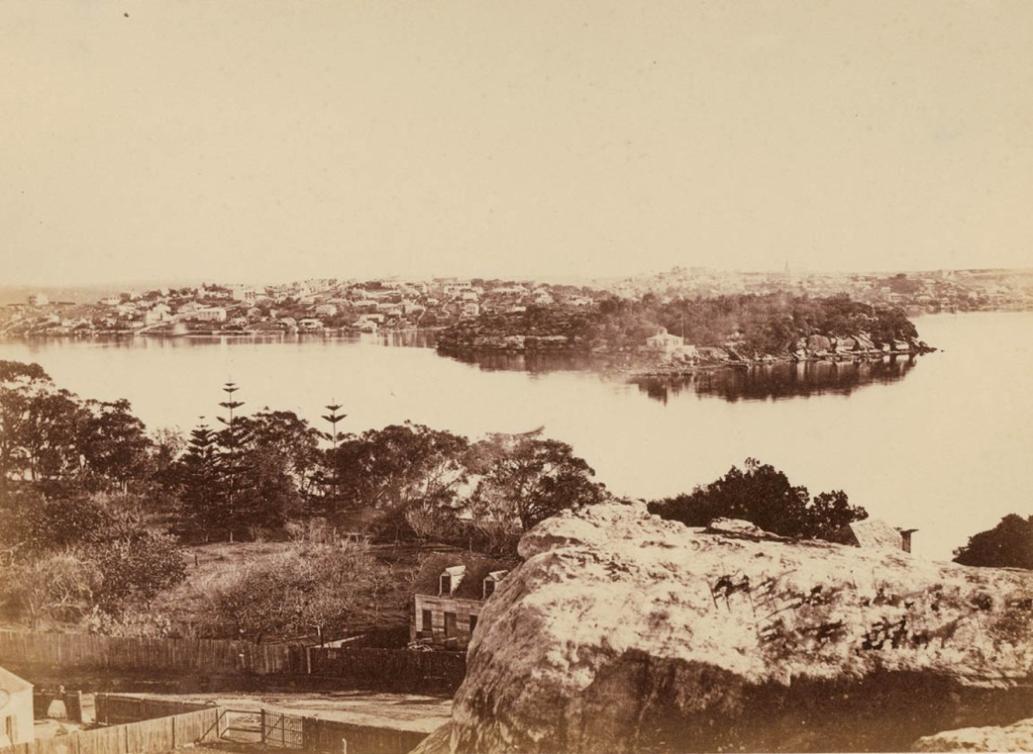 Balmain & Goat Island from North Shore circa 1870's. Image No.: a089881, courtesy The Mitchell Library, State Library of NSW 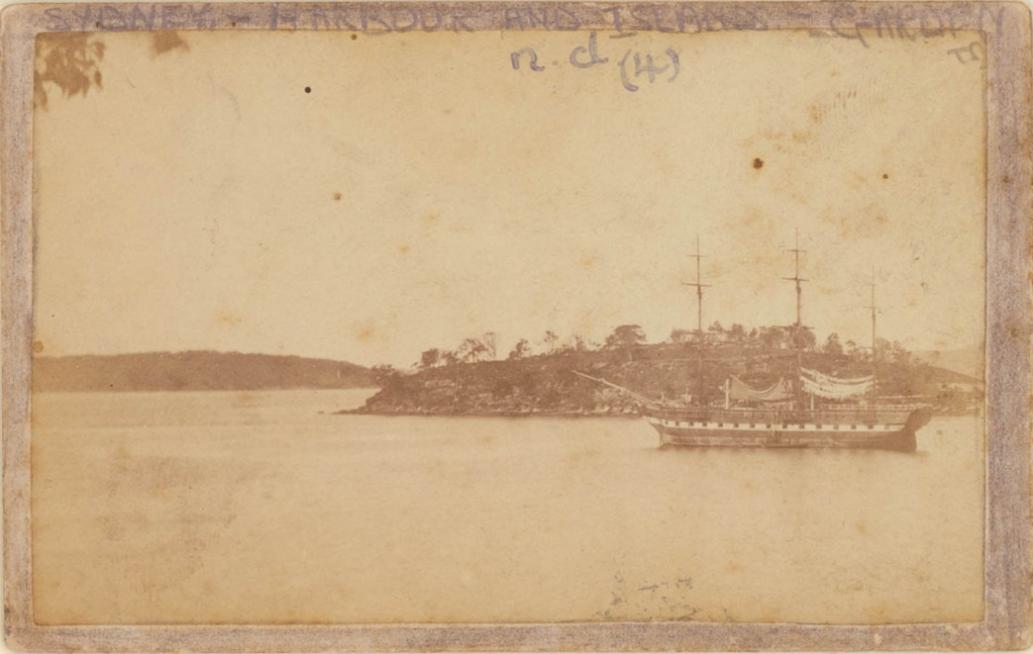 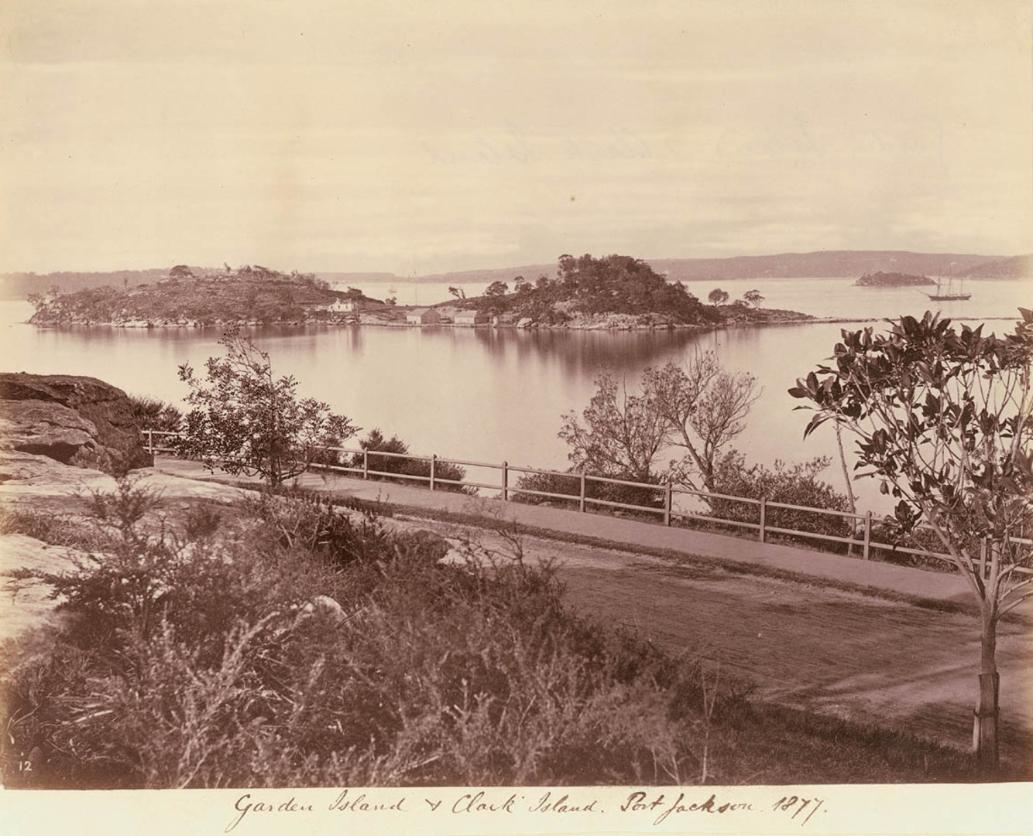 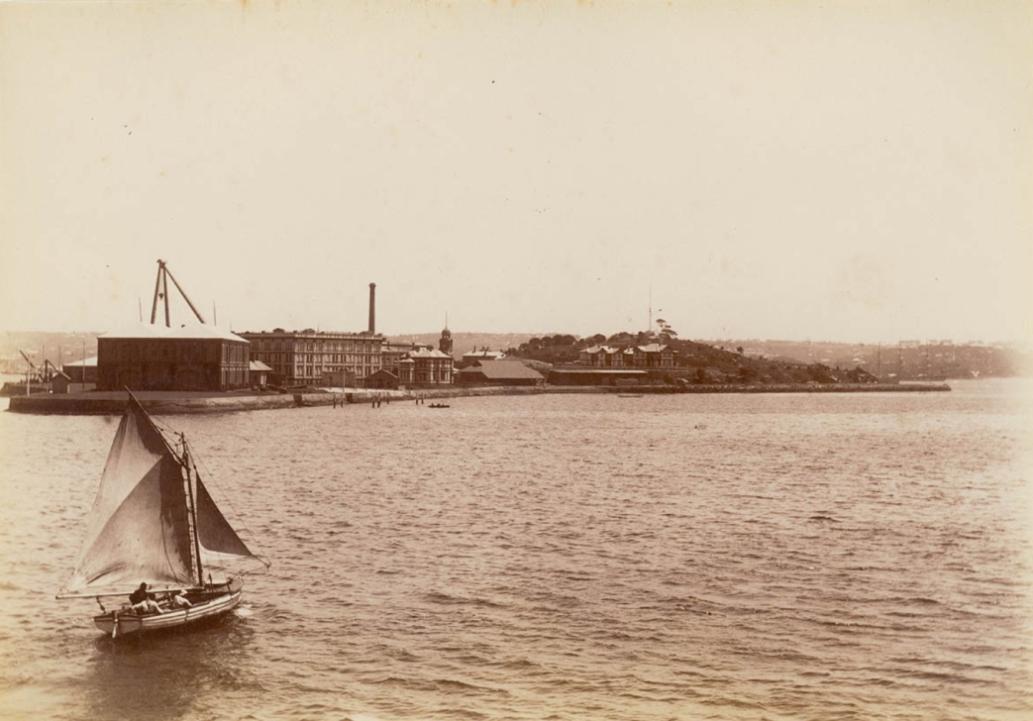