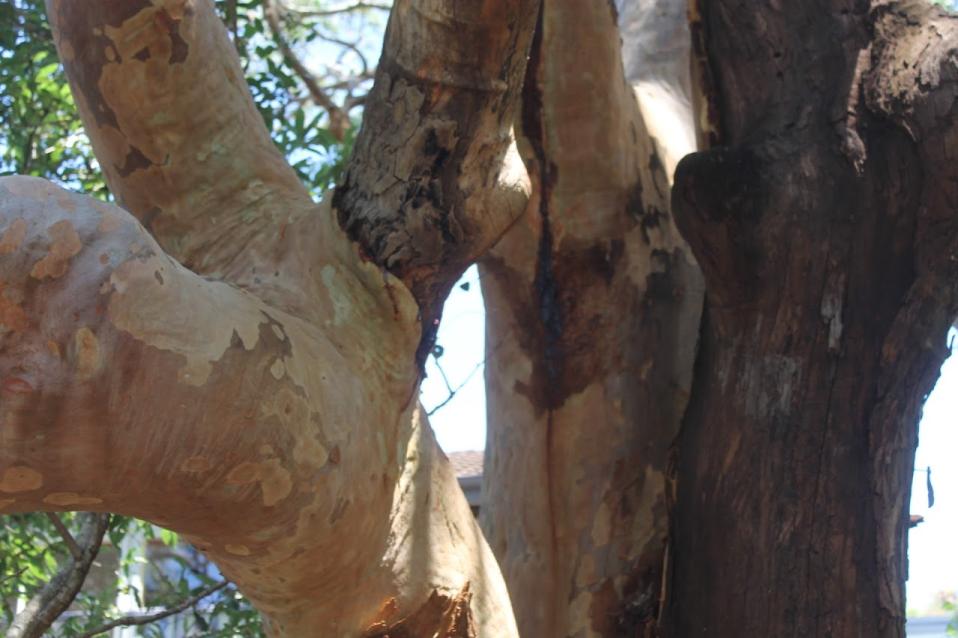 Increasing tree canopy and green cover across Greater Sydney and increasing the proportion of homes in urban areas within 10 minutes’ walk of quality green, open and public space are among the New South Wales premier’s new priorities. Cities around Australia have similar goals. In our latest study, we asked if more of any green space will do? Or does the type of green space matter for our mental health?

We also found poorer mental and general health among adults in areas with higher percentages of bare grass nearby, but there’s likely more to that than meets the eye.

How did we do the research?

Our research involved tracking changes in health over an average of about six years, for around 46,000 adults aged 45 years or older, living in Sydney, Newcastle or Wollongong. We examined health in relation to different types of green space available within a 1.6 kilometre (1 mile) walk from home.

Our method helped to guard against competing explanations for our results, such as differences in income, education, relationship status, sex, and age. We also restricted the sample to adults who did not move home, because it is plausible that people who are already healthier (for instance because they are more physically active) move into areas with more green space.

So is the answer simply more trees and less grass? Not exactly. Let’s get into the weeds.

Trees make it cool to walk

Imagine you’re walking down a typical street on a summer’s day in the middle of an Australian city. It’s full of right angles, grey or dark hard surfaces, glass structures, and innumerable advertisements competing for your attention. Then you turn a corner and your gaze is drawn upwards to a majestic tree canopy exploding with a vivid array of greens for as far as you can see. 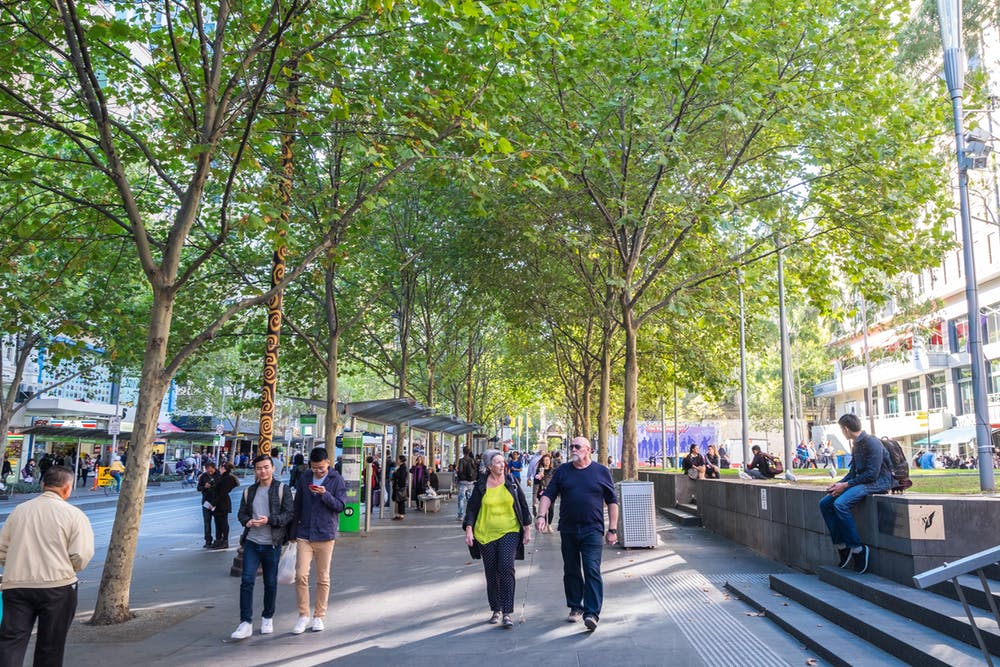 A tree-lined street like Swanston Street in Melbourne is a more walkable street.  kittis/Shutterstock

Let’s get the obvious out of the way. Walking down this green street, you may instantly feel some relief from the summer heat.

Studies are linking high temperatures with heat exhaustion and mental health impacts. Research has suggested trees, rather than other forms of green space, may be best at reducing temperatures in cities. It may also simply be more comfortable to walk outside in cooler temperatures – not to mention going for a run or bike ride, both of which are good for mental health.

But as the minutes of walking beneath this natural umbrella of lush foliage accumulate, other things are happening too. The vibrant colours, natural shapes and textures, fresh aromas, and rustling of leaves in the breeze all provide you with effortless distraction and relief from whatever it was you might have been thinking about, or even stressing over.

Studies back this up. Walks through green space have been shown to reduce blood pressure, improve mental acuity, boost memory recall, and reduce feelings of anxiety. The Japanese have a name for this type of experience: shinrin-yoku.

You walk past groups of people on the footpath taking time to catch up over coffee in the shade. Some research has found that tree cover, rather than green space more generally, is a predictor of social capital. Social capital, according to Robert Putnam, refers to the “social networks and the associated norms of reciprocity and trustworthiness” that may have important influences on our life chances and health.

You walk further and a chorus of birdsong soars through the neighbourhood noise. Trees provide shelter and food for a variety of animals. Research suggests tree canopy tends to be  more biodiverse than low-lying vegetation.

Increased biodiversity may support better mental health by enhancing the restorative experience and also via the immunoregulatory benefits of microbial “Old Friends” – microorganisms that helped shape our immune systems but which have been largely eliminatedfrom our urban environments.

Green spaces with tree canopy are settings where communities can come together to watch birds and other animals, which can also be catalysts for new conversations and developing feelings of community belonging in the neighbourhoods where we live.

So, what about the grass?

Our research did not show a mental health benefit from more bare grassed areas. This does not mean grass is bad for mental health.

Previous research suggests adults are less likely to wander in green spaces that are relatively plain and lacking in a variety of features or amenities. This may also be partly attributable to preferences for green spaces with more complex vegetation, such as parks that mix grass with tree canopy. 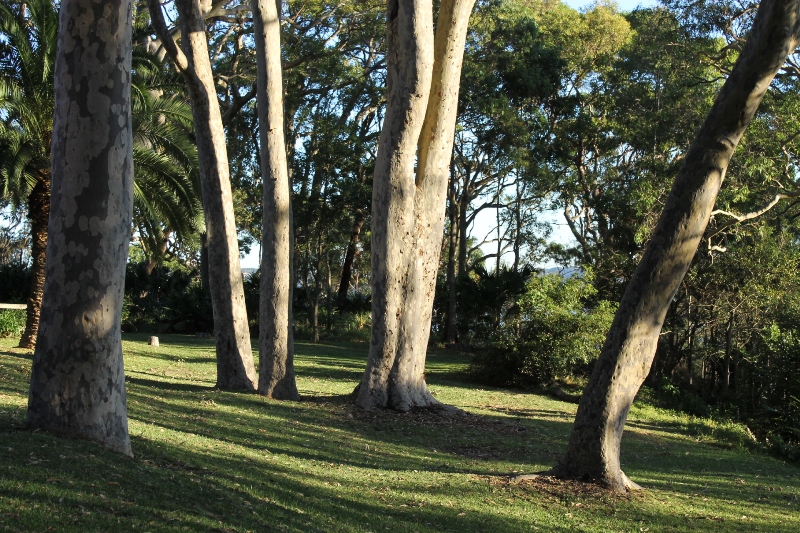 Furthermore, large areas of bare grass in cities can make built environments more spread-out and less dense. Without tree canopy to shield from the midday sun, this may increase the likelihood of people using cars for short trips instead of walking through a park or along a footpath. The result is missed opportunities for physical activity, mental restoration, and impromptu chats with neighbours. Previous work in the United States suggests this might be why higher death rates were found in greener American cities.

Large open areas of grass can be awesome for physical activity and sport, but let’s make sure there is also plenty of tree canopy too, while also thinking about ways to get more people outdoors in green spaces. Here are some suggestions.

As the density of Australian cities continues to increase and more of us live in apartments and/or work in high-rise office blocks, it is great to see strategies to invest in tree cover and urban greening more generally across Australia. Cities with such plans include Sydney, Melbourne, Brisbane, Bendigo, Fremantle, and Wollongong.

You can get involved and have some fun at the same time too. Lots of evidence says gardening is really great for your mental health. So why not grab a mate and spend a couple of hours planting a tree on July 28 for National Tree Day!

This article was published first in The Conversation. Republished under a Creative Commons Licence. 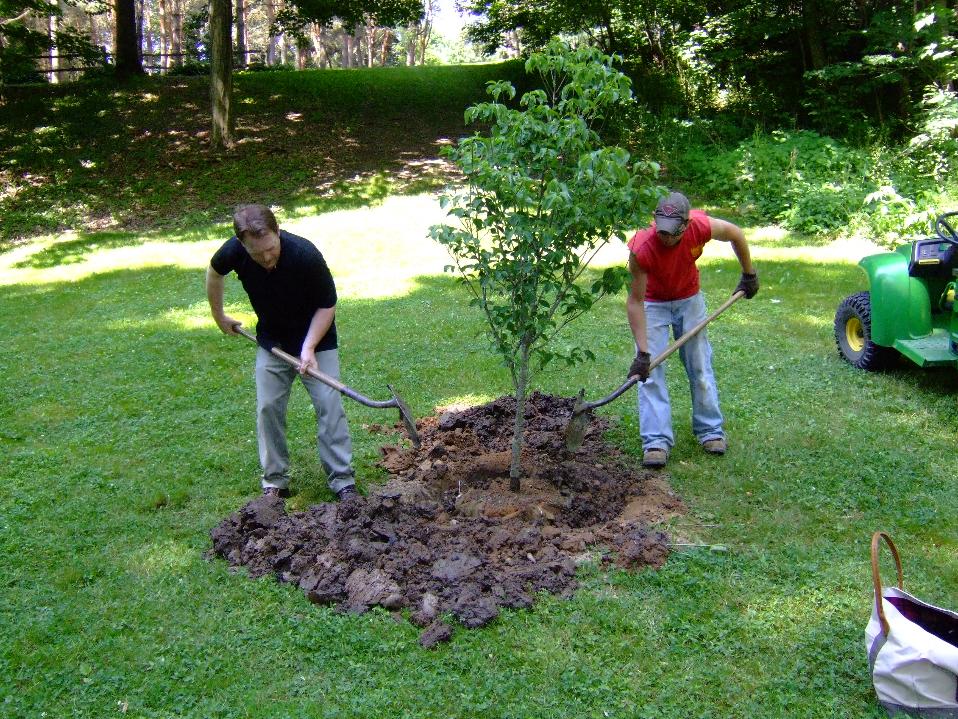 Both the act of planting a tree and its presence over the decades are good for us.  Amy Fry/flickr, CC BY-NC-SA

Green space – how much is enough, and what's the best way to deliver it?

Reducing stress at work is a walk in the park