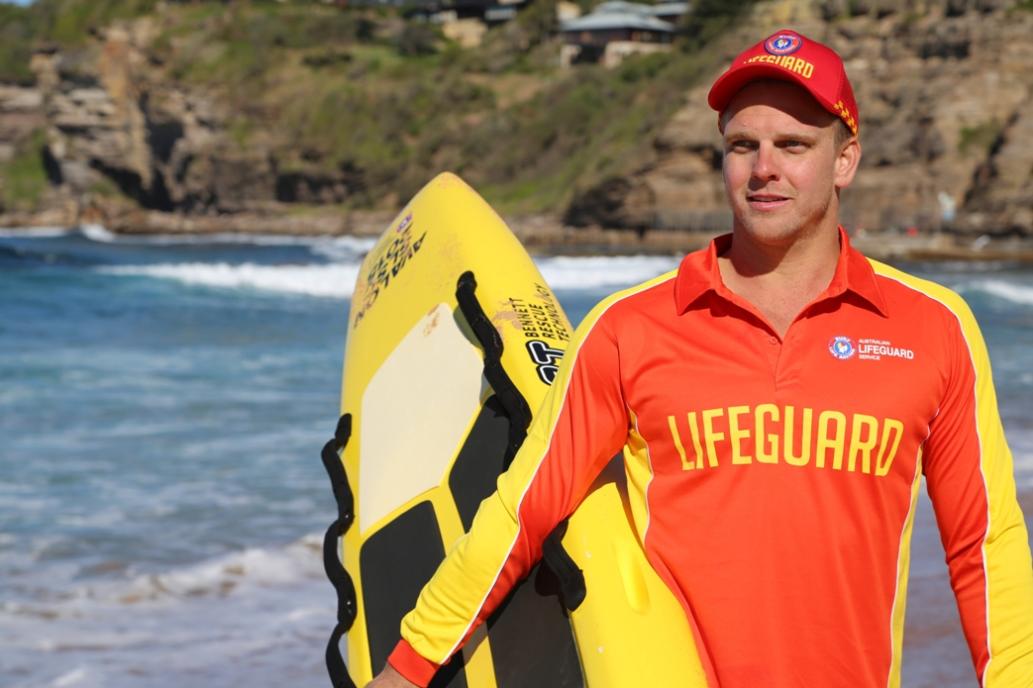 Wednesday 13 July 2016 - BY SLS NSW
After being thrust into the position of Acting Lifeguard Supervisor at very short notice, Matthew Hastie quickly proved he was the right man for the job. A successful season has culminated in him being named Pittwater Lifeguard of the Year for 2015/16.
Hastie a 10-year veteran of the Australian Lifeguard Service (ALS) put his skills, professionalism and local knowledge to good use on some of Sydney’s busiest beaches.
At the beginning of the season Matthew Hastie was charged with assisting in the development and implementation of a new training program for Jet Ski operations. He wasn’t to know just how useful that program would be as less than a week after the training course a jet ski was used in a daring rescue of a teenager at the notorious Warriewood Blowhole.
Conditions were near identical to what they were during training and the Lifeguards involved credited their training for the successful outcome.
He was also heavily involved in co-ordinating a joint-agency search and rescue operation for a missing swimmer at Turrimetta Beach. His calmness under pressure and ability to juggle conflicting priorities was noted by all in attendance.
ALS Southern Coordinator Phil Dunn said this public recognition was well deserved.
“Matt is an extremely popular Lifeguard at Pittwater, and well respected within the community. He really stepped up in the position of acting supervisor and grew as a leader throughout the season,” Mr Dunn said.
“He is well respected by his peers and thoroughly deserves this award”.
Although the sun has barely set on what was regarded as a very successful summer preparations for the new season are already well advanced.
The ALS is actively seeking recruits to help meet patrol obligations for next summer and is keen to hear from aspiring Lifeguards looking for a new challenge with men, women, and those with a strong Surf Life Saving background encouraged to apply online via the Australian Lifeguard Service NSW Website.
As a result of being named Pittwater’s Lifeguard of the Year, Matthew’s nomination will now be put forward to a selection panel where he will be in contention to be named as a finalist for the NSW-Wide Lifeguard of the Year Awards.
An overall winner for this prestigious award will be crowned as part of next month’s celebrations of the 2016 NSW Surf Life Saving Awards of Excellence to be held at Sydney’s iconic Four Seasons Hotel.
Become a Lifeguard
The Australian Lifeguard Service NSW is currently seeking self-motivated, well presented Lifeguards with exceptional surf lifesaving and lifeguarding knowledge to work in the Greater Sydney area (Pittwater, Royal National Park, Lake Parramatta).
The ideal candidate will have a professional manner, strong fitness levels and a proven ability in determining priorities, making sound judgements and the ability to respond appropriately under pressure.
The Australian Lifeguard Service (ALS) NSW is a subsidiary of Surf Life Saving NSW (SLSNSW), providing professional lifeguard services to Local Government Associations (LGA) and other regulatory bodies. The Australian Lifeguard Service is the largest provider of professional lifeguards in Australia.
Location: Pittwater, Royal National Park, Lake Parramatta
Position: Casual
Closing date for applications: Friday 5th August 2016
Application form and details

The Surf Life Saving NSW Awards of Excellence proudly presented by Stramit recognises outstanding achievements and contributions in all aspects of Surf Life Saving. The awards will celebrate the accomplishments of members, clubs and branches in the 2015/16 season.

Everyone is invited, come and celebrate the 2015/16 season with your fellow NSW surf lifesavers!

Make sure you visit the Facebook Event to stay updated with relevant information.

ALL nominations must be submitted via www.surflifesaving.com.au/aoenominations.